Here, we describe a method for loading a calcium-sensitive dye through the frog nerve stump into the nerve endings. We also present a protocol for the recording and analysis of fast calcium transients in the peripheral nerve endings.

One of the most feasible methods of measuring presynaptic calcium levels in presynaptic nerve terminals is optical recording. It is based on using calcium-sensitive fluorescent dyes that change their emission intensity or wavelength depending on the concentration of free calcium in the cell. There are several methods used to stain cells with calcium dyes. Most common are the processes of loading the dyes through a micropipette or pre-incubating with the acetoxymethyl ester forms of the dyes. However, these methods are not quite applicable to neuromuscular junctions (NMJs) due to methodological issues that arise. In this article, we present a method for loading a calcium-sensitive dye through the frog nerve stump of the frog nerve into the nerve endings. Since entry of external calcium into nerve terminals and the subsequent binding to the calcium dye occur within the millisecond time-scale, it is necessary to use a fast imaging system to record these interactions. Here, we describe a protocol for recording the calcium transient with a fast CCD camera.

Calcium ions (Ca2+) participate in many neuronal signaling processes, including the initiation, maintenance, and plasticity of mediator release1,2,3,4,5. Upon the arrival of the action potential, extracellular Ca2+ enters the nerve terminal and initiates neurotransmitter release. In some synapses, the calcium current can be measured directly by electrophysiological methods6,7,8. In the case of the neuromuscular junction (NMJ), one cannot use direct patch clamp and two-electrode voltage clamp techniques due to the minute size of the nerve endings.

Recordings of inward Ca2+ currents from the nerve endings in the NMJ can be done by indirect electrophysiological methods9,10. However, these methods require the pretreatment of the synapse by sodium and potassium ion channel blockers. Optical methods do not require the pharmacological separation of ionic currents in the nerve terminal and permit recordings of Ca2+ influx, triggered by action potentials, and the subsequent elevation of Ca2+ ions in the axoplasm11,12,13,14. These methods are based on recordings of changes in the fluorescence of specific Ca2+-sensitive dyes upon the binding of free Ca2+ ions15,16,17,18,19.

Ca2+ indicators can be loaded into the cells through a variety of methods, depending on the purpose of the experiment. Researchers use the bath application of membrane-permeable dye forms20,21, loading via patch pipette22, or microinjection23,24,25. However, all these methods have some limitations in the case of the NMJ due to its peculiarities in synaptic architectonics. For the NMJ, the most convenient and successful method is to load the dye through the nerve stump, a forward-filling method26,27,28,29. This technique can be used for loading various fluorescence dyes into the peripheral nerve endings. This method was successfully used for Drosophila nerve terminals28, the lizard motor nerve28, and frog motor nerve terminals17,26,27,30. Depending on the object under study, methodical details can vary. A glass micro-pipette can be employed for small nerves from larvae28. Several researchers have described a method27,28 in which a freshly cut end of nerve innervating a muscle is immersed into a well pre-filled with a dye. The preparation is then left for several hours to soak the dye. The dye is soaked up by the axons and transported to the nerve terminals. In this paper, we describe a method of loading a fluorescence indicator into frog motor nerve terminals through the nerve stump. Our protocol uses a plastic pipette tip for the incubation of the tissue with a dye. We also describe how to acquire and analyze Ca2+ fluorescence transients.

Experiments were performed on isolated nerve-muscle preparations of the musculus cutaneous pectoris from the Rana ridibunda frog. The size of animals of both genders was about 5-9 cm. The experimental procedures were performed in accordance with the guidelines for the use of laboratory animals of the Kazan Federal University and the Kazan Medical University, in compliance with the NIH Guide for the Care and Use of Laboratory Animals. The experimental protocol met the requirements of the European Communities Council Directive 86/609/EEC and was approved by the Ethical Committee of the Kazan Medical University.

1. Preparation of the Solutions

3. Preparing the Tissue for Microscopy 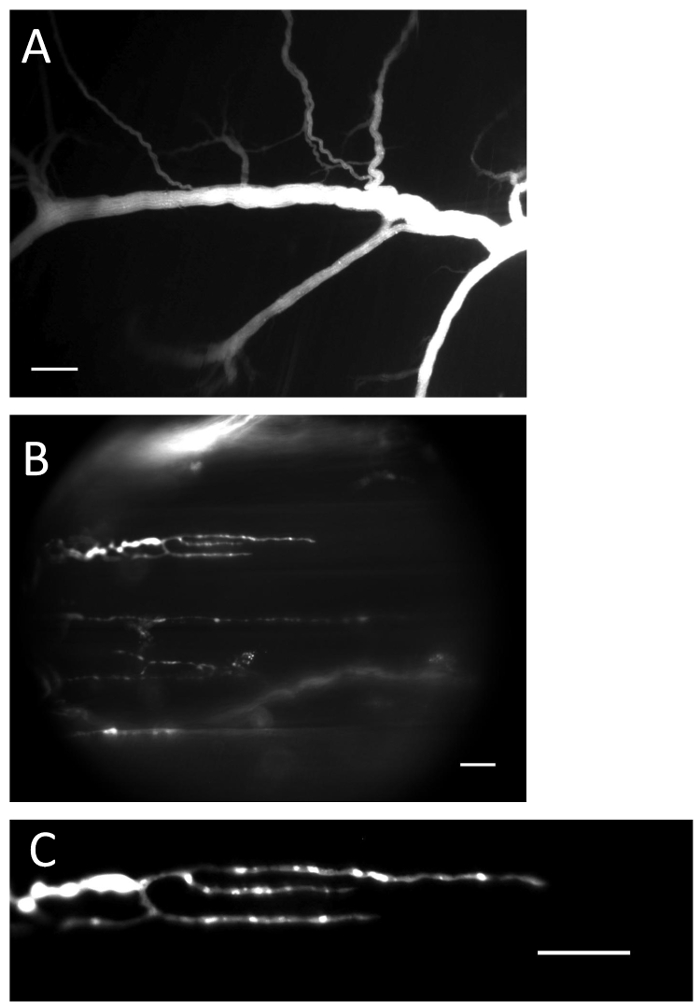 Note: The details of capturing fluorescence signals are specific for each microscope and camera type, but the key consideration is the image capturing speed.

NoOTE: For data analysis, use the CCD camera software and ImageJ; the data is represented as a curve in a spreadsheet program. In the CCD camera software, average 20 repeats and export the results to an ImageJ support file. In ImageJ, select the ROI and background. Subtract the background from the ROI. Represent the data as a ratio: (ΔF/F0 -1) x 100%, where's ΔF is the intensity of fluorescence during stimulation and F0 is the intensity of fluorescence at rest.

After the dye loading and upon motor nerve stimulation, an increase in the amplitude of the fluorescent signal (Ca2+ transient) can be detected in the nerve terminals (see Figure 2). Parameters of Ca2+ transients are presented in Table 1. Quantitatively, the parameters of the Ca2+ transients measured in our study are close to the data obtained by other scientists at synapses of cold-blooded animals15,34. The parameters of the Ca2+ transients depend on the rate of binding of Ca2+ with the dye and the subsequent dissociation. The rate of entry of Ca2+ into the nerve ending, interaction with the dye, and diffusion in the cytoplasm all affect the rise time of the Ca2+ transient. The decay time of the fluorescent signal depends on the affinity of the dye, the speed of the Ca2+ interaction with intracellular buffers, and the removal by ion pumps35. The amplitude analysis of Ca2+ transients can be used to study the influence of various substances on the calcium entry that participates in neurotransmitter release33. 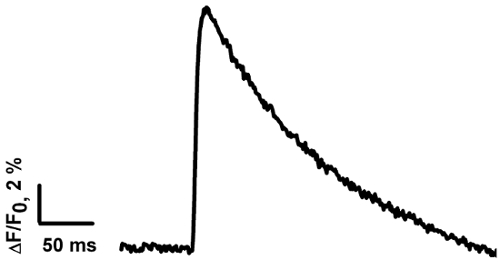 Figure 2: The averaged Ca2+ transient measured in the frog NMJ. The Ca2+ transient was calculated based on the average of signals from 13 frog NMJs. Please click here to view a larger version of this figure.

Table 1: The averaged parameters of theCa2+ transient. The data are presented as the mean ± SE; n is the number of measurements in distinct NMJs. The peak ΔF/F is the averaged amplitude of ΔF/F.

In this paper, we presented the method of performing Ca2+-sensitive dye loading into frog nerve endings through the nerve stump. By the end of the loading procedure, all terminals in the proximal part of the nerve have significant levels of fluorescence. It has been estimated that the intra-terminal concentration of the probe varies between 40 and 150 µM17.

Our own observations33,35, as well as the data of other researchers30, prove the lack of any appreciable influence of the loading procedure on the amplitude of the postsynaptic response or on the frequency of miniature end-plate potentials. Good longevity was documented in the loaded preparations. There are some important points we would like to draw attention to. It is very essential to place the nerve stump into the dye-loading solution withinseveral minutes after excision to enable the dye to enter into the axons of the cut nerve; delays can cause ineffective loading, presumably due to the resealing of nerve axons27,36. Some investigators immerse the nerve stump in 100 mM EDTA (a Ca2+- and Mg2+-chelator) immediately after the excision of the nerve to prevent the cut axons from resealing. The buffer is removed after 1-2 min and replaced with a dye-loading solution37. The use of a petroleum-jelly well instead of plastic tubing for the loading procedure permits the use of a shorter nerve stump. While using this approach, the nerve is cut after it is immersed in the HEPES solution with dye, and the axons do not reseal because of the lack of divalent ions in the dye solution27,28.

It is very important to avoid a long period of fluorescent illumination of the tissue, because this affects its health and survival. We use Nomarski optics in the visible-light channel to search for nerve terminals. During the recording, we limit the illuminated field using a diaphragm.

It is noteworthy that this loading method is suitable only for preparations that can withstand long incubations. To reduce the dye-loading time when studies are being conducted on more fragile tissues (e.g., synapses of warm-blooded animals), it is necessary to downscale the nerve stump length and to use micropipettes for loading29,39.

This loading technique is well suited for imaging changes in cytosolic Ca2+, with fluorescent indicators under both single-nerve stimulation and rhythmic synaptic activity17,27,35. The analysis of the Ca2+-transient amplitude can be used to study the influence of different substances on the calcium entry that participates in neurotransmitter release33.

This research was performed under the Russian Government's Program for Competitive Growth of the Kazan Federal University and a grant from the Russian Foundation for Basic Research (16-04-01051; 16-34-00817; 15-04-02983). We thank four anonymous reviewers for providing helpful comments on earlier drafts of the manuscript. We express our gratitude to Yuliya Aratskaya for the voice recording. We are grateful to Dr. Victor Ilyin for the many helpful comments and the help with the finale editing of the manuscript.