To study ovarian tumor progression in a physiologically relevant model, multicellular spheroids were cultured in a microdevice under simulated fluid flow. This dynamic 3D model emulates the intraperitoneal environment with the cellular and mechanical components where ovarian cancer metastasis occurs.

Ovarian cancer is characterized by extensive peritoneal metastasis, with tumor spheres commonly found in the malignant ascites. This is associated with poor clinical outcomes and currently lacks effective treatment. Both the three-dimensional (3D) environment and the dynamic mechanical forces are very important factors in this metastatic cascade. However, traditional cell cultures fail to recapitulate this natural tumor microenvironment. Thus, in vivo-like models that can emulate the intraperitoneal environment are of obvious importance. In this study, a new microfluidic platform of the peritoneum was set up to mimic the situation of ovarian cancer spheroids in the peritoneal cavity during metastasis. Ovarian cancer spheroids generated under a non-adherent condition were cultured in microfluidic channels coated with peritoneal mesothelial cells subjected to physiologically relevant shear stress. In summary, this dynamic 3D ovarian cancer-mesothelium microfluidic platform can provide new knowledge on basic cancer biology and serve as a platform for potential drug screening and development.

Ovarian cancer is the most lethal gynecological cancer and is characterized by widespread peritoneal dissemination and the formation of malignant ascites1. This extensive peritoneal metastasis represents a major clinical challenge and is associated with poor clinical outcomes. Unlike most solid carcinomas that metastasize via the blood, ovarian cancer primarily disseminates within the peritoneal cavity. Tumor cells exist as multicellular aggregates/spheroids during the process of metastasis2. The fact that suspension culture can enrich ovarian cancer stem/tumor-initiating cells further suggests that these spheroids may be associated with both tumor aggressiveness and enhanced chemoresistance3,4. There are differences in drug response between 2D and 3D cultures, which presumably have different molecular mechanisms5.

Emerging evidence shows that mechanical stimuli, including shear stress, can modulate cell morphology, gene expression, and, thus, the phenotypes of tumor cells9,10,11. As malignant ascites develop and accumulate during tumor progression, ovarian tumor cells are exposed to fluid flow and the resulting shear stress. A number of groups, ours included, have shown the impact of shear stress on ovarian cancer progression, including cytoskeleton modifications, epithelial-to-mesenchymal transitions, and cancer stemness12,13,14,15. Thus, a physiologically relevant microenvironment is important for the investigation of tumor peritoneal metastasis. However, current in vitro hydrodynamic culture systems have limitations on mimicking and controlling a constant, low, physiologically relevant shear stress16,17,18,19. Conventional in vitro approaches focusing on either the cellular or mechanical environment are still limited in mimicking the complexity of the intraperitoneal microenvironment with proper physiological relevance.

Here, in order to engineer a new model of the peritoneum to overcome the limitations of conventional strategies and to advance the study of the intraperitoneal compartment in cancer metastasis, a 3D microfluidic-based platform with controlled fluid flow was designed. In this model, ovarian cancer spheroids were co-cultured with primary human peritoneal mesothelial cells in microfluidic chips under continuous fluidic flow (Figure1A). The mesothelial cells were plated on fibronectin. Non-adherent ovarian cancer spheroids were seeded into microfluidic channels with continuous flow medium perfused by a syringe pump. Both the 3D environment and the dynamic mechanical forces are very important factors of the metastatic cascade. This platform can be used for investigating the intraperitoneal microenvironment in terms of complex cellular and co-culture interactions, as well as with regard to dynamic mechanical cues.

4. Observation of HPMCs and Cancer Spheroids after Perfusion

Using this protocol, a microfluidic platform was set up to model ovarian cancer spheroids with mesothelial cells under hydrodynamic conditions. Primary human peritoneal mesothelial cells were cultured in the microdevice for 16 h and observed under a bright-field microscope. As shown in Figure 2A, the channel bottom was successfully covered with a monolayer of HPMCs. It is important to note that bubble formation during fibronectin or HPMC patterning will lead to channel coating failure. Through non-adherent suspension culture, multicellular spheroids with diameters of approximately 100 µm, which are similar in size to those found in patients' ascites, were generated and labeled with green fluorescent dye, CMFDA. The spheroids were then transferred to HPMC-coated microfluidic channels and remained in suspension. Cell morphologies were observed under the microscope and images were captured (Figure 2B). The fluorescent-labeled cancer spheroids can be easily differentiated from the mesothelial cells under a fluorescence microscope (Figure 2C). 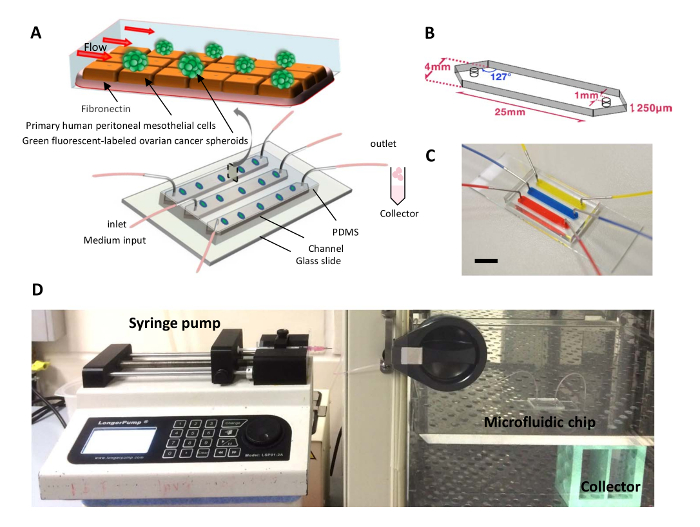 Figure 1. A Dynamic 3D Peritoneal Microdevice for Modeling Ovarian Cancer Multicellular Spheroid Behaviors. (A) Schematic diagram of a microfluidic chip used to co-culture ovarian cancer spheroids with HPMCs under flow condition. (B) Schematic diagram showing the design of the microfluidic channels. (C) Photograph of a microfluidic chip used in the protocol, with its channels infused with dye solution for clear visualization. Bar = 1 cm. (D) Photograph showing the experimental setup. Please click here to view a larger version of this figure.

This assay offers a flexible and physiologically relevant model that can be incorporated with various biochemical and cell-based assays, including, but not limited to, adhesion assays, mesothelial clearance assays, and drug screening. It can be applied to the evaluation of the effect of the intraperitoneal microenvironment on cancer progression. However, several experimental conditions might need to be optimized, depending on the aims of the project (e.g., the number of HPMCs and cancer spheroids seeded per channel, the co-culture time, etc.). Other cell types in the intraperitoneal microenvironment, such as fibroblasts, endothelial cells, or immune cells, can also be included in the system in order to study the essential interactions between ovarian cancer spheroids and nearby cells. Other ECM components, such as laminin, vitronectin, or collagen, can also be used. One weakness of this protocol that may need to be considered is that, while the coupling of nutrient replenishing and shear stress is reminiscent of that seen in vivo, there is no separate control of nutrient replenishing and shear stress in our current system. Moreover, techniques such as on-chip trypsinization combined with fluorescence-activated cell sorting will be needed to separately collect ovarian cancer cells and HPMCs for further molecular studies about different types of cells.

This technique exhibits several advantages when compared with traditional approaches. First, 3D co-culture better mimics the in vivo intercellular communication between ovarian cancer cells and mesothelial cells. Second, cells are cultured under fluidic flow but are not in static condition, generating a cellular response that is potentially representative of the in vivo situation12,13. Furthermore, the fluid flow can be precisely controlled, mimicking the hydrodynamic conditions at different stages of tumor progression.

In summary, the dynamic 3D ovarian cancer-mesothelium co-culture model presented here provides a flexible framework for modeling tumor behavior in the peritoneal cavity. With this model, the interaction between cancer cells and mesothelial cells under a dynamic hydrodynamic condition can be comprehensively analyzed. It can greatly advance our understanding of the underlying mechanisms of metastatic progression and might also facilitate therapeutic development.