Skip to content
Trial ends in Request Full Access Tell Your Colleague About Jove
This is a sample clip. If you're new to JoVE sign up and start your free trial today to watch the full video! If your institution has an existing subscription, log in or sign up to access this video.
Developmental Biology
Author Produced
CITE THIS  SHARE

The ability to accurately detect transcripts or proteins in Drosophila tissues is critical for studying their abundance and localization related to the development process. Here is the description of a straightforward procedure to dissect pupal wings. These wings can be used as samples in several techniques (immunohistochemistry, PCR assay, etc.).

Wing development in Drosophila melanogaster is an ideal model for studying morphogenesis at tissue level. These appendages develop from a group of cells named wing imaginal discs formed during embryonic development. In the larval stages the imaginal discs grow, increasing its number of cells and forming monolayered epithelial structures. Inside the pupal case, the imaginal discs bud out and fold into bilayers along a line that becomes the future margin of the wing. During this process, the longitudinal primodia veins originate vein cells on the prospective dorsal and ventral surfaces of the wing. During the pupal stage the stripes of vein cells of each surface communicate in order to generate tight tubes; at the same time, the cross-veins begin their formation.

With the help of appropriate molecular markers, it is possible to identify the major elements composing the wing during its development. For this reason, the ability to accurately detect transcripts or proteins in this structure is critical for studying their abundance and localization related to the development process of the wing.

The procedure described here focuses on manipulating pupal wings, providing detailed instructions on how to dissect the wing during the pupal stage. The dissection of pupal tissue is more difficult to perform than their counterparts in third instar larvae. This is why this approach was developed, to obtain rapid and efficient high quality samples. Details of how to immunostain and mount these wing samples, to allow the visualization of proteins or cell components, are provided in the protocol. With little expertise it is possible to collect 8-10 high quality pupal wings in a short amount of time.

Drosophila wings are developed from the wing imaginal discs. The primordial of these wing discs are put aside during the embryonic development as small groups of 20-30 imaginal cells that invaginate from the embryonic epithelium. While the larva is growing to the third instar stage, mitosis occurs in the imaginal cells at specific characteristic times raising its numbers (approximately 50000 cells) and forming the wing disc1,2,3,4. As the cells proliferate, they fashion a tubular epithelium, resulting in a self-folding compact spiral. During pupation, the disc epithelium telescopes out to form the two-layered wing and the longitudinal veins start as lacunae between them, which occurs twice during wing developmental5,6.

The arrangement of veins always has an identical pattern; the ability to easily identify every alteration within the veins formation makes mutations extremely visible (e.g. missing or extra veins, changes in the vein positions, etc.). Interestingly, the phenotype variations are usually the evidence of mutations in known or novel components of signaling pathways that are relevant for wing development. One of the pathways that plays a role in determining the position and maintaining vein and intervein territories is the Hedgehog (Hh) pathway6,7,8.

Given the importance of the pupal wing as a model system, it will be important to obtain good quality samples to work with. In the past, scientists that have published protocols to dissect Drosophila wings have not given an appropriate guide to attain workable samples. Without the guidance of a researcher one cannot clearly visualize the process. In these alternate dissecting approaches the pupa is split in two, separating the wing from surrounding tissue and repeatedly washed to remove the debris. This kind of approach claims to leave the wing free of contaminates but due to previous experience the process is slower and there is a higher chance of compromising the structure of the fragile wings9.

The procedure described here was developed by the demand to find a fast and efficient method to obtain pupal wing samples suitable to detect specific proteins or transcripts using immunodetection protocols or polymerase chain reaction (PCR) assays. In order to illustrate this, the expression and localization of Patched (Ptc or the canonical receptor of the Hh pathway) is detected in pupal wing samples, providing a protocol that includes relevant details to successfully carry out the complete procedure.

The protocol offers a straightforward method for obtaining pupal wing samples that retain the familiar morphology of the wing. From these preparations it is possible to obtain stacks of images that could be projected as 2-D or 3-D, to investigate distribution and/or the enrichment of proteins during the differentiation of the wing. A similar protocol (see the note in 2.9) can be used to collect the large pupal wing sample (involving 50-80 pupal wings) necessary to synthesize complementary deoxyribonucleic acid (cDNA), the template used in PCR reactions. 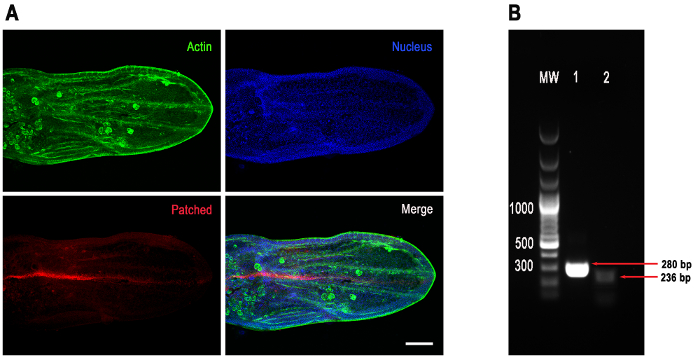 The method of dissection described in this video can be used to prepare high quality samples of Drosophila pupal wings from different development stages for many types of techniques (e.g., immunofluorescence, cDNA synthesis to PCR assays, in vitro wing development). In terms of this method the scientist involved have used 24-30 h APF. However there should be no obstacle within the essential steps in dissection of younger or older pupa. Changes may have to be made to accommodate smaller stage pupa.

The protocol could be performed to dissect one pupa or several pupae at the same time. This helps to accelerate the procedure, making it easier to reach a large number of wings dissected. In this case there is the option of removing a row of 4-5 pupae at the same time. You can remove the pupae together or if it is not possible, continue to remove individually onto the same slide (see section III of the video: "Multiple pupae dissection"). To remove the naked pupa from the opened case, it is important that the posterior tip is small enough. It is possible to remove the case entirely; although it would make the transfer faster, the removal of the entire case is challenging and there is a greater risk of damaging the pupa.

Experience dictates that an important maneuver to consider is to leave (the last 2 h to complete the development time stipulated) the pupa attached to the microscope slide inside the incubator but outside the vial. This lapse of time helps to dry the case making it easier to break. Another critical step during dissection for immunohistochemistry, is to peel off the cuticle that covers the wing epithelium, thereby granting access of the antibody to the entire wing surface. This step should be done after fixing for several minutes (at least 5 min after making the incision at the hinge point) because the fixative stabilizes the tissues and changes the cuticle consistency, making it easier to peel.

While performing all immunohistochemistry steps, be sure that the wings are in constant movement (rocking platform). The movement helps to improve the interchange and penetration of the solutions during washes and incubations. Nevertheless, it is important to perform them gently avoiding the occurrence of undesired distortions in the morphology of this fragile structure (i.e., it is sufficient that the oscillations of the platform slightly move the liquid medium containing the samples).

This procedure provides an alternative and complementary approach to the already published methods for pupal wing dissection.

We would like to thank CSIC for the financial support given to this project, to Mariana Di Doménico for her technical assistance with confocal microscopy; to José Leonardo Báez for his manuscript corrections; to Luciano Correa for his dedication to the creation of the video; to Natalia Rosano for lending her voice for the video and the Bloomington Drosophila Stock Center for providing the stocks used in this study. The Apa1 monoclonal anti-Ptc developed by Isabel Guerrero was obtained from the Developmental Studies Hybridoma Bank (DSHB) under the auspices of the NICHD and maintained by The University of Iowa, Department of Biological Sciences, Iowa City, IA 52242.