The overall goal of this protocol is to measure greenhouse gas emissions from paddy fields using the static closed chamber technique. The measurement system needs specific adjustments due to the presence of both a permanent water layer in the field and of the plants within the chamber headspace.

This protocol describes the measurement of greenhouse gas (GHG) emissions from paddy soils using the static closed chamber technique. This method is based on the diffusion theory. A known volume of air overlaying a defined soil area is enclosed within a parallelepiped cover (named "chamber"), for a defined period of time. During this enclosure period, gases (methane (CH4) and nitrous oxide (N2O)) move from soil pore air near their microbial source (i.e., methanogens, nitrifiers, denitrifiers) to the chamber headspace, following a natural concentration gradient. Fluxes are then estimated from chamber headspace concentration variations sampled at regular intervals throughout the enclosure and then analyzed with gas chromatography. Among the techniques available for GHG measurement, the static closed chamber method is suitable for plot experiments, as it does not require large homogenously treated soil areas. Furthermore, it is manageable with limited resources and can identify relationships among ecosystem properties, processes, and fluxes, especially when combined with GHG driving force measurements. Nevertheless, with respect to the micrometeorological method, it causes a minimal but still unavoidable soil disturbance, and allows a minor temporal resolution. Several phases are key to the method implementation: i) chamber design and deployment, ii) sample handling and analyses, and iii) flux estimation. Technique implementation success in paddy fields demands adjustments for field flooding during much of the cropping cycle, and for rice plant maintenance within the chamber headspace during measurements. Therefore, the additional elements to be considered with respect to the usual application of non-flooded agricultural soils consist of devices for: i) avoiding any unintended water disturbance that could overestimate fluxes, and ii) including rice plants within the chamber headspace to fully consider gases emitted through aerenchyma transportation.

Agriculture is a productive sector that, together with forestry and other land use, produces approximately 21% of global GHG emissions1. Accurate measurement of agricultural soil GHG emissions is key not only to establish the proper role determination of agroecosystems as both source and sink in climate change2, but also to define appropriate and effective mitigation strategies within the framework of the Paris agreement targets.

Emission fluxes of the two most important GHGs produced by agricultural soils (i.e., N2O and CH4) are measurable by either micrometeorological methods or the closed-chamber technique3. The vast majority of studies reporting data on GHG emissions from soils over the past three decades applied the closed-chamber technique4,5 that was first described in 19266. Several efforts have been made to fine-tune the technique, and overcome all sources of experimental artifact and bias7,8,9,10,11,12,13,14. Specific protocols, compiled at different times, aimed to standardize the methodologies15,16,17,18,19, and scientific attempts are still underway to establish the best practices for employing the technique and minimizing bias in flux estimates.

The static closed-chamber technique, whose application to paddy soils is described in this paper, relies on the diffusion theory and provides the enclosure of a known volume of air above a portion of soil surface for a precise period. During the enclosure, CH4 and N2O molecules migrate by diffusion along a natural concentration gradient from soil pore air, where they are produced by specific microorganisms (methanogens in the case of CH4; nitrifiers and denitrifiers for N2O), to the air enclosed within chamber headspace, eventually through the flooding water or the plant aerenchyma. The concentrations of the two gases within the chamber headspace increase over time, and occurrence of these increases provides for flux estimates.

With respect to the micrometeorological methods, closed chamber measurements are often preferred for differing land use types and ecosystems when studying GHG fluxes at the plot scale, because they are not encumbered by a large homogenous field2 or high logistical and investment requirements20. Moreover, they allow the simultaneous analysis of manipulated experiments, such as different agronomical practices or other field treatments12,21. Finally, the technique allows identification of the relationships among ecosystem properties, processes, and fluxes. Alternatively, two main drawbacks of the technique include the relatively inefficient exploration of spatial and temporal heterogeneity, and the effects of soil disturbance due to chamber deployment22. However, these detriments can, at least partially, be overcome with: proper chamber design (to minimize soil disturbance), adoption of a sufficient number of replicates (to explore spatial variability), and automated system use that permits intensification of the frequency of daily measurements (to account for diurnal variability) or regular (same time of day) measurement (to omit the effect of temperature in residual variability).

A first application of the method to a paddy field dates back to the early 80's23, and the main peculiarities of its use with respect to upland fields are the presence of flooding water on soil and the need to include plants within the headspace during chamber enclosure. As carefully described in this paper, the first trait implies the need for specific systems to prevent water disturbance during measurement events, to avoid flux overestimates caused by turbulence-induced enhancement of gas diffusion through flooding water. The second essential trait is to account for gas transport through rice aerenchyma, representing up to 90% of emitted CH424, which requires proper devices to include plants during measurement events.

2. Anchor Deployment and Arrangement of the System for Preventing Soil Disturbance

Every measurement event produces a series of GHG concentrations over time for each of the monitored chambers that is the basis for estimating GHG fluxes. Basically, there is no particular need to discard data, but a high incidence of situations that fall outside the theoretical model of monotonic function (strictly increasing or decreasing) warrants attention on the accuracy of protocol application and possible unpredicted errors (e.g., vials leakage).

Figure 1 reports an entire year of correct example CH4 fluxes. As demonstrated with error bars, such results may vary greatly, mainly as a consequence of to the spatial heterogeneity of microbial processes responsible for GHG production. For users who experience high variability, such results do not necessarily signal bad results. To address high variability that makes treatment differences impossible to detect, simply increase the number of replicates.

In Figure 2, an example of poor exploration of seasonal variability is shown: the insufficient number of measuring events led to an underestimation of yearly fluxes. 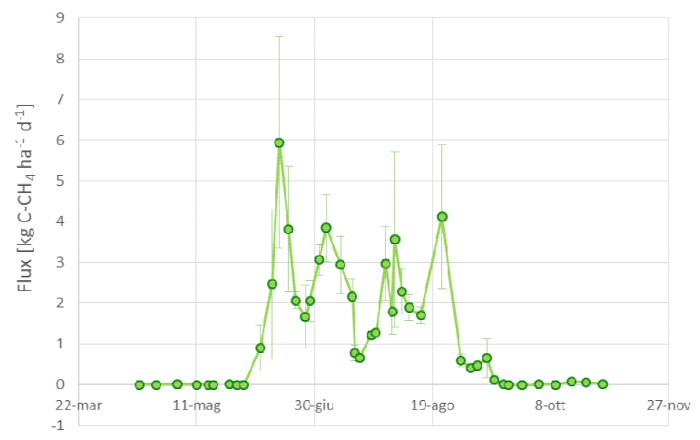 Figure 1. Example of seasonal variation of CH4 daily fluxes from a flooded paddy field over a full year, including both a cropping cycle (from May to September) and inter-cropping periods. Error bars represent standard errors. Please click here to view a larger version of this figure. 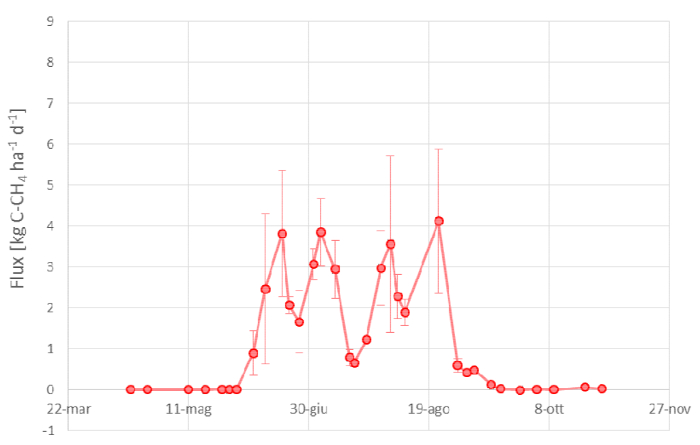 Figure 2. Example of seasonal variation of CH4 daily fluxes from a flooded paddy field over a whole year, with an insufficient number of measuring events not well covering all the pivotal moments for GHG emissions. Error bars represent standard errors. Please click here to view a larger version of this figure. 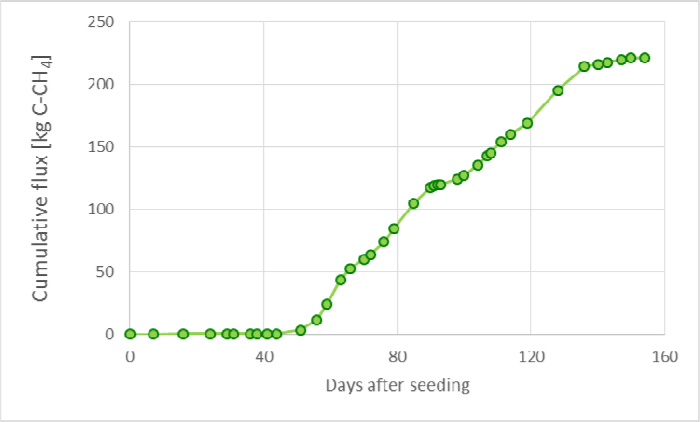 Figure 3. Example of cumulative CH4 emissions over a cropping season. Please click here to view a larger version of this figure.

Figure 4. Main phases of method application with corresponding critical points and indicators of success. Please click here to view a larger version of this figure.

The application of the static closed-chamber technique in paddy rice consists of five essential phases, corresponding to the main sections described in the Protocol. Each phase contains critical points of which to be aware, and indicators to check the success of phase implementation, as summarized in Figure 4.

Most critical points described in Figure 4 are already addressed in the protocol and could be easily resolved by following the included recommendations. The trickiest critical point of the present protocol is the calculation of fluxes based on GHG concentration variation during chamber enclosure. Also when using the package HMR for calculations, it is advisable to select the best model to apply, independent of the HMR suggestion, based on visual evaluation. This is even more important when concentrations in time deviate from the expected behavior of consistent increase or decrease.

Several variations of the described technique are possible within the structure of the main principles, especially related to chamber geometry (the chamber can also be cylindrical), chamber material (any non-permeable, non-reactive, non-source/sink of gas molecules under consideration, and easy to use material, such as Teflon which is suitable, but more expensive), and type of GHG analyzer (portable systems are available that do not require gas transfer in syringes and vials). Nevertheless, measuring GHG fluxes from soils is a pivotal step required to monitor climate change sources, to understand processes leading to emissions, to study the effectiveness of possible mitigation strategies, and to inform models for predicting future scenarios. It is more important than ever to adopt common protocols that will build a uniform body of knowledge to monitor agroecosystems for the global GHG budget.

The Ideal Gas Law is here applied to calculate the molar volume of real gases. This application is widely used and accepted in the specific body of literature, and the ideal gas approximation can be used with reasonable accuracy30.

Finally, depending on the experimental questions to be addressed within the context of GHG measurements, consider measuring the main drivers of CH4 and N2O emissions, such as soil temperature, redox potential, soil pore Dissolved Organic Carbon concentrations, soil pore nitrates, and ammonium concentration.

The authors are grateful to Marco Romani and Eleonora Francesca Miniotti and the staff of Research Centre of Ente Nazionale Risi, who hosted the experimental trial where the video was created. We also want to thank Francesco Alluvione for the first scientific flash leading to protocol realization and to Joan Leonard for her precious work of English editing of the manuscript.