Here we present a robust method to reprogram primary embryonic fibroblasts into functional cardiomyocytes through overexpression of GATA4, Hand2, Mef2c, Tbx5, miR-1, and miR-133 (GHMT2m) alongside inhibition of TGF-β signaling. Our protocol generates beating cardiomyocytes as early as 7 days post-transduction with up to 60% efficiency.

Trans-differentiation of one somatic cell type into another has enormous potential to model and treat human diseases. Previous studies have shown that mouse embryonic, dermal, and cardiac fibroblasts can be reprogrammed into functional induced-cardiomyocyte-like cells (iCMs) through overexpression of cardiogenic transcription factors including GATA4, Hand2, Mef2c, and Tbx5 both in vitro and in vivo. However, these previous studies have shown relatively low efficiency. In order to restore heart function following injury, mechanisms governing cardiac reprogramming must be elucidated to increase efficiency and maturation of iCMs.

The generation of human-derived induced pluripotent stem cells (hiPSCs) from fibroblasts by overexpression of four transcription factors, first demonstrated by Takahashi & Yamanaka, opened the door to new breakthroughs in cell therapy19. These cells can differentiate into all three germ layers19, and several highly efficient methods for generating large numbers of CMs have been previously shown20,21. HiPSC-derived CMs (hiPS-CMs) offers a powerful platform to study cardiomyogenesis and may have important implications for repairing the heart following injury. However, hiPS-CMs currently face translational hurdles due to concerns of teratoma formation22, and their immature nature may be pro-arrhythmogenic23. Reprogramming fibroblasts into hiPSCs sparked interest in directly reprogramming fibroblasts into other cell types. Ieda et al. demonstrated that overexpression of GATA4, Mef2c, and Tbx5 (GMT) in fibroblasts results in direct reprogramming to cardiac lineage, albeit at low efficiency24. Reprogramming efficiency was improved with the addition of Hand2 (GHMT)25. Since these early studies, many publications have demonstrated that altering the reprogramming factor cocktail with additional transcription factors26,27,28,29, chromatin modifiers30,31, microRNAs32,33, or small molecules34 leads to improved reprogramming efficiency and/or maturation of induced cardiomyocyte-like cells (iCMs).

Here we provide a detailed protocol to generate iCMs from mouse embryonic fibroblasts (MEFs) with high efficiency. We previously showed that the GHMT cocktail is significantly improved with the addition of miR-1 and miR-133 (GHMT2m) and is further improved when pro-fibrotic signaling pathways including transforming growth factor β (TGF-β) signaling or Rho-associated protein kinase (ROCK) signaling pathways are inhibited35. Using this protocol, we show that approximately 60% of cells express cardiac Troponin T (cTnT), approximately 50% express α-actinin, and a high number of beating cells can be observed as early as Day 11 following transduction of reprogramming factors and treatment with the TGF-β type I receptor inhibitor A-83-01. Furthermore, these iCMs express gap junction proteins including connexin 43 and exhibit spontaneous contraction and calcium transients. This marked improvement in reprogramming efficiency compared to earlier studies demonstrates the potential to regenerate CMs from endogenous cell populations that remain in the heart post-infarction.

All experiments requiring animals were approved by the Institutional Animal Care and Use Committee at the UC Denver Anschutz Medical Campus.

2. Production of Retrovirus and Transduction of MEFs

NOTE: All steps in this section must be carried out in a Biosafety Level 2 Cabinet. Since this protocol utilizes retroviral transduction, ensure that safety precautions are taken including treating all waste containing viral media with 10% bleach for at least 20 min. Refer to Figure 1B for a timeline for reprogramming.

NOTE: If imaging at 10X magnification, standard cell culture dishes and plates are suitable for calcium imaging. Imaging at higher magnification requires that cells be plated on glass coverslips or glass bottom dishes. 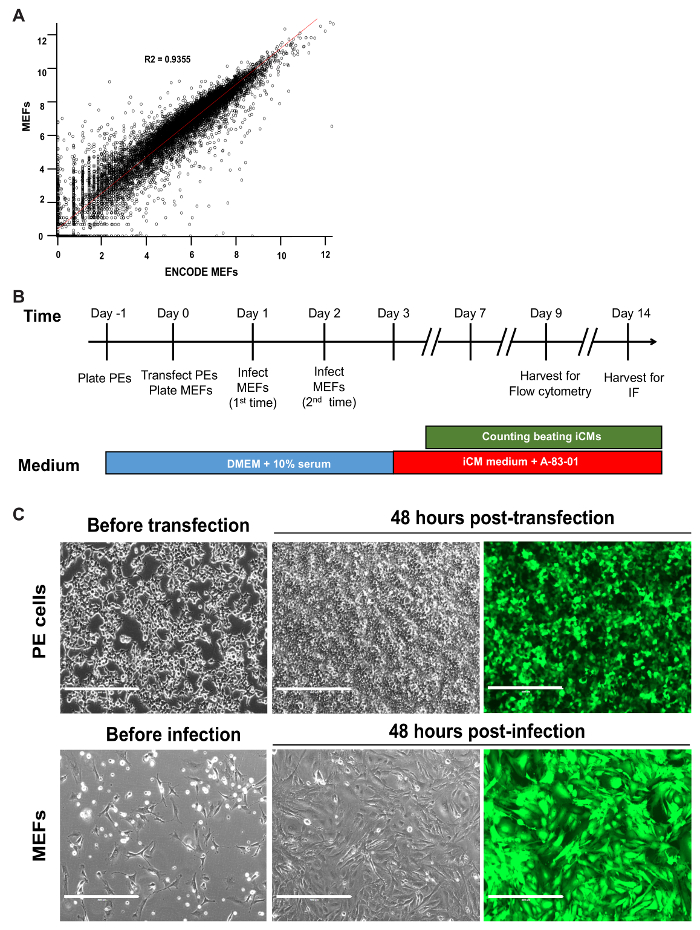 Figure 1: Timeline of Reprogramming and Optimal Plating of Cells. (A) Scatterplot of log-transformed RNA-seq data for MEFs generated in our lab versus ENCODE MEFs. The R2 value and linear regression line are shown. (B) Schematic of all critical steps in the GHMT2m-mediated reprogramming of MEFs. (C) PE cells at 70-80% confluence prior to transfection (top row, left panel) and GFP signal 48 hours post-transfection to indicate transfection efficiency (top row, middle and right panels). MEFs seeded sparsely prior to infection to prevent overcrowding over the time period of reprogramming (bottom row, left panel) and GFP signal 48 hours post-infection to indicate infection efficiency (bottom row, middle and right panels). Scale bar = 400 µM. Please click here to view a larger version of this figure. 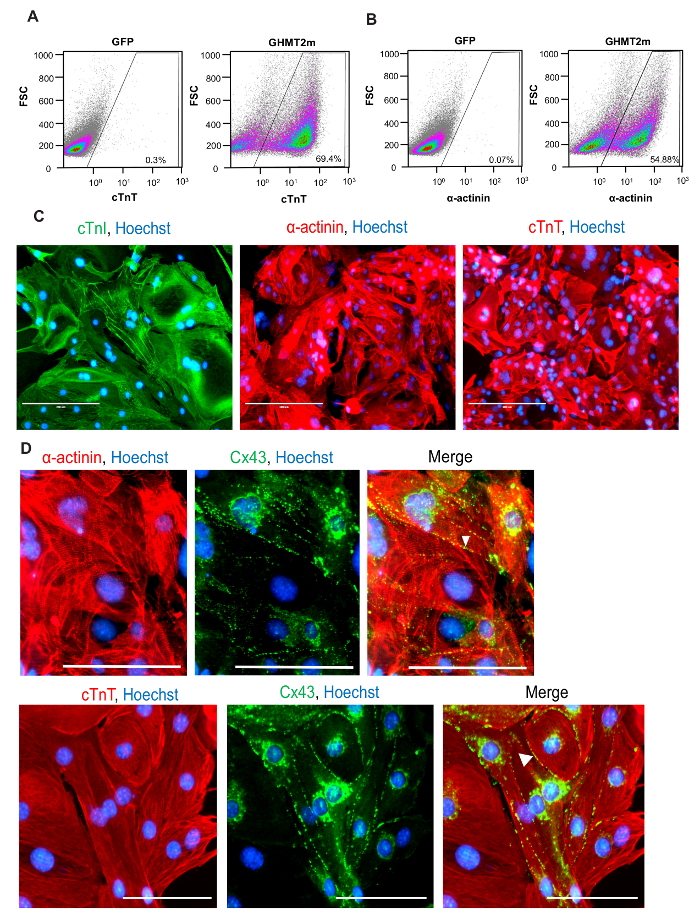 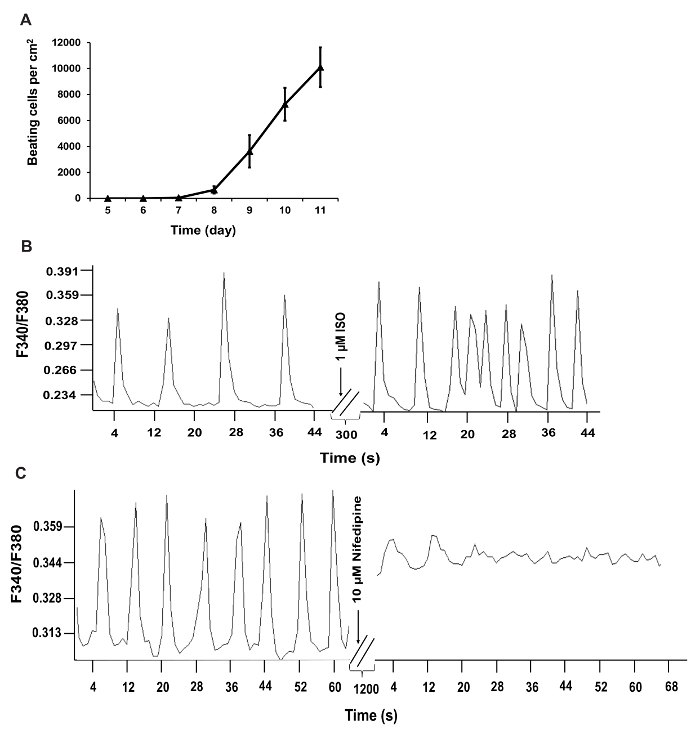 Figure 3: Functional Quantification of iCMs. (A) Time course of beating cell counts following GHMT2m transduction. Beating cells were counted by eye and cell counts from 10 fields per dish over 3 dishes per experiment were averaged and included in panel A. (B and C) Recorded calcium transients of iCMs. Calcium transient frequency is altered in iCMs following treatment with 1 µM Isoproterenol or 10 µM nifedipine. F340/F380, the ratio of fluorescence intensity at 340 and 380 nm. Please click here to view a larger version of this figure. 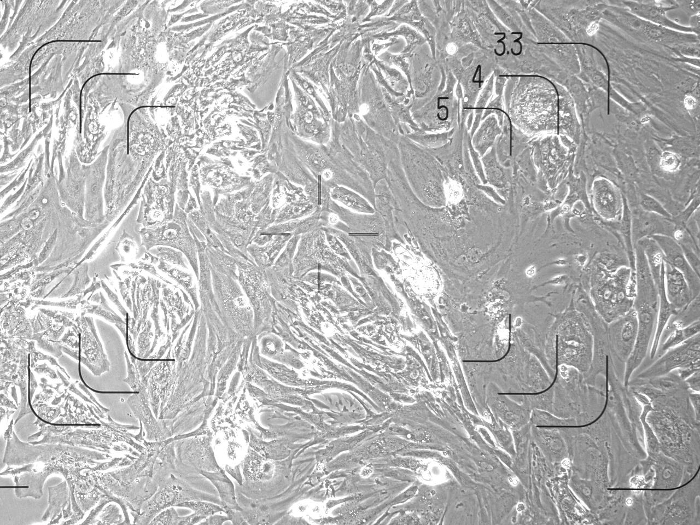 The present study outlines a high-efficiency strategy to directly reprogram fibroblasts into functional iCMs via delivery of GHMT2m reprogramming factors combined with suppression of pro-fibrotic signaling pathways. Using flow cytometry, immunofluorescent imaging, calcium imaging, and beating cell counts, we show the majority of cells in this protocol undergo successful reprogramming and adopt CM lineage fate. We have previously shown that the addition of anti-fibrotic compounds including the TGF-β type I receptor inhibitor A-83-01 yields an approximately 6-fold increase in the number of beating iCMs compared to transduction with GHMT2m alone, indicating that pro-fibrotic signaling is a strong endogenous barrier to cardiac reprogramming. This system can, therefore, be harnessed for drug screening to investigate mechanisms governing cardiomyogenesis; the addition of a small molecule alongside A-83-01 could uncover negative regulators of cardiomyogenesis. Conversely, the addition of a small molecule to GHMT2m alone could elucidate positive regulators of cardiomyogenesis. Unraveling the mechanisms through which these positive and negative regulators govern CM differentiation will result in a better understanding of cardiomyogenesis and lead to even more efficient reprogramming and maturation protocols.

Many variables affect reprogramming efficiency. We find that cell plating density greatly impacts both the production of retroviral particles in the case of PE cells, and the efficient uptake of all reprogramming factors in the case of MEFs. Furthermore, the passage number can affect these parameters as well. To ensure optimal production of viral particles, transfect PE cells before passage 20. To ensure efficient uptake of retroviral particles, do not passage MEFs after freezing.

Several recent studies have also demonstrated high-efficiency reprogramming of MEFs by knocking down PRC1 member Bmi along with expression of GMT30 or by overexpressing Akt in addition to GHMT37. Addition of ZFN281 to GHMT + Akt led to a 4-fold increase in troponin T positive cells in adult tail tip fibroblasts, attributed in part to suppression of inflammatory gene signatures38. Furthermore, the combination of a TGF-β signaling inhibitor and WNT signaling inhibitor increased GMT-mediated cardiac reprogramming39. Importantly, the signaling pathways involved in these studies do not appear to overlap. Therefore, it is likely that cross-talk between multiple signaling pathways could further enhance cardiac reprogramming.

A number of studies demonstrated reprogramming in vivo through the delivery of reprogramming factors in mice following left anterior descending (LAD) artery ligation25,32,39,40,41. These studies did show modest improvement in ventricular function following MI, underscoring the therapeutic potential of cardiac reprogramming on heart regeneration following injury. Our protocol reprograms MEFs with the highest efficiency in vitro to date. Therefore, it will be interesting to see if high-efficiency reprogramming is capable of fully restoring heart function post-injury in vivo. These studies could serve as a basis for translating this method into novel cell therapies for patients' post-infarction.