The epigenetic transcription regulation mediated by 5-methylcytosine (5mC) has played a critical role in eukaryotic development. Demethylation of these epigenetic marks is accomplished by sequential oxidation by ten-eleven translocation dioxygenases (TET1-3), followed by the thymine-DNA glycosylase-dependent base excision repair. Inactivation of the TET2 gene due to genetic mutations or by other epigenetic mechanisms is associated with a poor prognosis in patients with diverse cancers, especially hematopoietic malignancies. Here, we describe an efficient single step purification of enzymatically active untagged human TET2 dioxygenase using cation exchange chromatography. We further provide a liquid chromatography-tandem mass spectrometry (LC-MS/MS) approach that can separate and quantify the four normal DNA bases (A, T, G, and C), as well as the four modified cytosine bases (5-methyl, 5-hydroxymethyl, 5-formyl, and 5-carboxyl). This assay can be used to evaluate the activity of wild type and mutant TET2 dioxygenases.

The C5 position of cytosine bases within CpG dinucleotides is the predominant methylation site (5mCpG) in mammalian genomes1. In addition, a number of recent studies have uncovered extensive C5 cytosine methylation (5mC) in non-CpG sites (5mCpH, where H = A, T, or C)2,3. 5mC modification serves as a transcriptional silencer at endogenous retrotransposons and gene promoters3,4,5. DNA methylation at 5mC also plays important roles in X chromosome inactivation, gene imprinting, nuclear reprogramming and tissue-specific gene expression5,6,7. Methylation of cytosine at the C5 position is carried out by DNA methyltransferases, and mutations in these enzymes cause significant developmental defects8. The removal of 5mC marks are initiated by TET1-3 5mC oxidases9,10. These TET-family dioxygenases convert 5mC into 5-hydroxymethylcytosine (5hmC), 5-formylcytosine (5fC) and 5-carboxylcytosine (5caC) by sequential oxidation steps11,12,13. Finally, thymine-DNA glycosylase replaces 5fC or 5caC to unmodified cytosine using the base excision repair pathway11.

Dynamic modification of 5mC in DNA by TET-family dioxygenases plays important roles in epigenetic transcriptional regulations. TET2 dioxygenase is frequently mutated in diverse hematopoietic malignancies12. To investigate the role of the TET2 enzyme in normal development and disease, we have cloned its minimal catalytically active domain without any affinity tag into the pDEST14 vector22. The untagged TET2 dioxygenase was produced at ∼5% of the total soluble protein by SDS-PAGE analysis in bacterial E. coli BL21 (DE3) cells. Since the catalytic domain of TET2 has a relatively high isoelectric point (∼7.49), compared with most indigenous E. coli proteins24,25,26, an efficient purification process utilizing a cation exchange chromatography was developed. This purification yielded >90% pure TET2 enzyme in a single step (Figure 1).

In order to separate and quantify different deoxycytidines derivatives and other four natural DNA bases following the TET2 enzymatic reaction, a sensitive LC-MS/MS-based assay was optimized. The liquid chromatography used a reversed-phase C18 columns. Standard curves were drawn using serial dilutions of a mixture containing all nucleosides (Figure 2). The gradient used for liquid chromatography, described in the experimental procedure, was able to resolve all eight nucleosides (Figure 3). The LC retention times (tr) for all eight nucleosides are described in Table 3. We further optimized the MS detection of each parent ion nucleoside (Q1), the most intense product ion (Q3) by determining their declustering potential (DP), entrance potential (EP), collision cell entrance potential (CEP), collision energy (CE), limit of detection (LOD), and lower limit of quantification (LLOQ) (Table 3). Finally, an LC-MS/MS method was developed that can separate and quantify the four normal DNA bases (A, T, G, and C), as well as the four modified cytosine bases (5-methyl, 5-hydroxymethyl, 5-formyl, and 5-carboxyl) (Figure 3).

The activity of untagged TET2 dioxygenase was determined using a 25-mer dsDNA containing one 5mC in a CpG island in each DNA strand (Table 2). After TET2 enzymatic reactions, DNA oligonucleotides were purified and converted into nucleosides. Then these nucleosides were subjected to LC-MS/MS assay. In the reactions without the TET2 enzyme (negative control), only dA, dT, dG, dC, and 5mdC peaks were observed. However, in the positive control reaction, which contained the TET2 dioxygenase, two new peaks corresponding to d5hmC and d5fC were observed. We were not able to detect the formation of d5caC nucleoside possibly due to its poor detection levels (Figure 2). These results demonstrate that the untagged TET2 dioxygenase purified in this procedure is catalytically active and can be used to characterize the wt-TET2 enzyme and its clinical mutants. 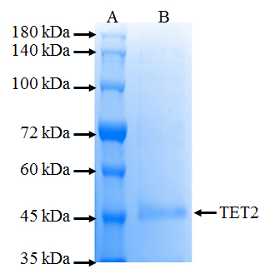 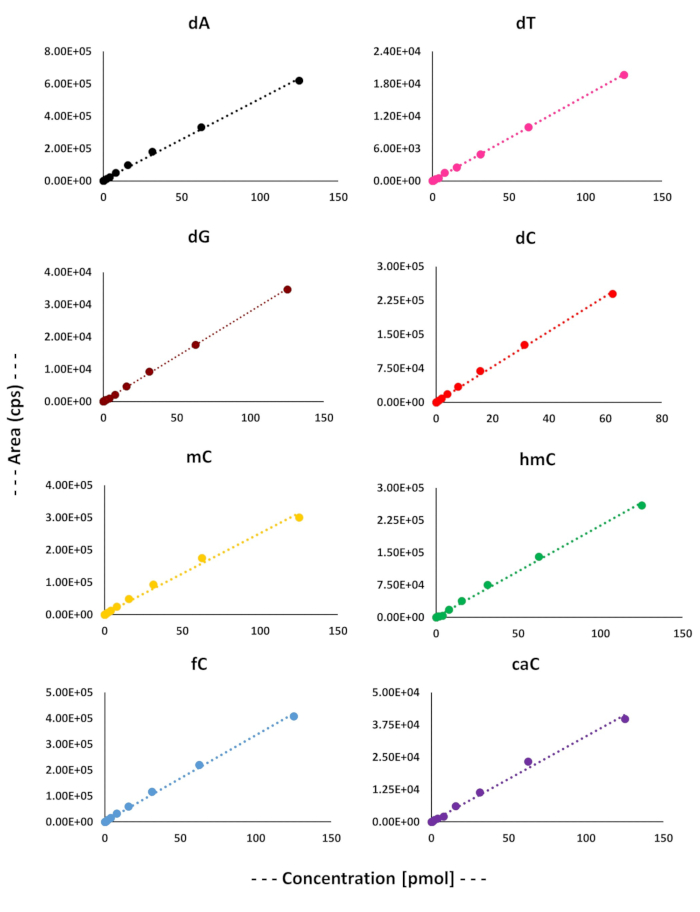 Figure 2. Standard curves was draw for four natural DNA nucleosides and different cytosine derivatives, which were then used for their quantification. Please click here to view a larger version of this figure. 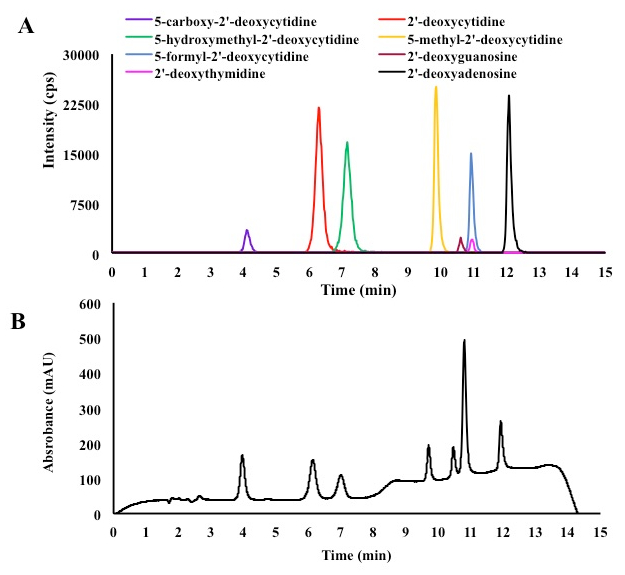 Table 2: Sequence of the sense and anti-sense 25-mer dsDNA oligonucleotide used as a TET2 substrate for in vitro oxidation reactions.

Mutations in TET2 gene are some of the most frequently detected genetic changes in patients with diverse hematopoietic malignancies. To date hundreds of different TET2 mutations, which include nonsense, frame-shift, and missense mutations, have been identified in patients12. Patients with TET2 mutations show low levels of genomic 5hmC in the bone marrow compared to those with wt-TET214. Mutant TET2 knock-in experiments have recapitulated the effects of these mutations on 5hmC levels in transfected cells14. Results from TET2-knockout mouse models demonstrated that level of TET2 enzyme inversely correlated with the progression of hematopoietic malignancies17,18,19,20. Consistently, Zhang et al. recently demonstrated that down-regulation of TET2 expression levels is a potential prognostic and predictive biomarker in cytogenetically normal acute myeloid leukemia27.

Despite growing evidence that TET2 plays a fundamental role in normal hematopoiesis and myeloid transformation, biochemical characterization of wt- and mutant TET2 remain at rudimentary stages due to difficulties associated with the production of active TET2 and its assay. Most studies have produced recombinant TET2 either using time-consuming baculovirus system in insect cells14, or as a glutathione S-transferase affinity tag in bacterial cells which requires removal of affinity tag21.

Further, additional challenges exist in the quantification of wt- and mutant TET2 dioxygenase activity. For these experiments, most studies have relied on antibody-based assays such as dot-blots14,28, enzyme-linked immunosorbent assays (ELISA)29, etc. Because these assays generally use only one antibody, e.g., 5hmC or 5fC or5caC, for detection of 5mC modification in substrate DNA, they do not provide a full picture of the catalytic reaction carried by TET isoforms. For these reasons, the LC-MS/MS-based assay has emerged as the only assay to quantify different cytosine modifications. In this regard, we have developed a novel liquid chromatography method that can separate the four normal DNA bases (A, T, G, and C), as well as the four modified cytosine bases (5mC, 5hmC, 5fC, and 5caC).

To quantify the eight nucleosides from TET2 catalyzed reactions, we have coupled our improved liquid chromatography method with tandem mass spectrometry. This sensitive LC-MS/MS assay was then utilized to determine the activity of recombinant untagged human TET2 enzyme. The approach described here will greatly enhance the evaluation of wt- and mutant TET2 dioxygenase activities.

The authors have no financial interests to declare.

This research was funded by the US Department of Defense in the form of an Idea Award (W81XWH-13-1-0174), Aplastic Anemia & MDS Foundation Grant, and UMRB grant to M.M. Authors thank Mohit Jaiswal and Subhradeep Bhar for initial cloning of TET2 in pDEST14 vector.