Excess dietary salt intake contributes to inflammation and plays a vital role in the development of hypertension. We previously found that antigen-presenting dendritic cells (DCs) can sense elevated extracellular sodium leading to the activation of the NADPH oxidase and formation of isolevuglandin (IsoLG)-protein adducts. These IsoLG-protein adducts react with self-proteins and promote an autoimmune-like state and hypertension. We have developed and optimized state-of-the-art methods to study DC function in hypertension. Here, we provide a detailed protocol for isolation, in vitro treatment with elevated sodium, and adoptive transfer of murine splenic CD11c+ cells into recipient mice to study their role in hypertension.

Excess dietary salt is a major risk factor for hypertension.1,2 The American Heart Association recommends a maximum of 2,300 milligrams (mg) of sodium (Na+) intake per day, however; less than 10% of the U.S. population observes this recommendation.3,4 Modest reductions in Na+ intake lower blood pressure and reduce the annual new cases of coronary heart disease and stroke in the U.S. by 20%.5 A major problem with excess salt consumption is that 50% of the hypertensive population exhibits salt-sensitivity, defined as a 10 mmHg increase in the blood pressure following Na+ loading or a similar drop in blood pressure after Na+ restriction and diuresis.6 Salt-sensitivity also occurs in 25% of normotensive individuals, and is an independent predictor of death and cardiovascular events.7,8 Salt-sensing mechanisms in hypertension involving the kidney have been well studied; however, recent studies suggest that immune cells can sense Na+.9,10

Recent evidence suggests that changes in extra-renal Na+ handling can cause accumulation of Na+ in the interstitium and promote inflammation.11,12 Our laboratory and others have shown that cells of both the innate and adaptive immune system contribute to the exacerbation of hypertension.9,13,14,15 Various hypertensive stimuli, including angiotensin II, norepinephrine, and salt cause macrophages, monocytes and T lymphocytes to infiltrate the kidney and vasculature and promote Na+ retention, vasoconstriction, blood pressure elevation and end-organ damage.9,16,17,18,19,20 In prior studies, we found that DCs accumulate isolevuglandin (IsoLG)-protein adducts in response to various hypertensive stimuli including angiotensin II and DOCA-salt hypertension.14 IsoLGs are highly reactive products of lipid peroxidation that rapidly and covalently adduct to lysines on proteins and their accumulation is associated with DC activation.14 We have recently established that elevated Na+ is a potent stimulus for IsoLG-protein adduct formation in murine DCs.9 Na+ entry into DCs is mediated through amiloride sensitive transporters. Na+ is then exchanged for calcium (Ca2+) via the Na+/Ca2+ exchanger. Ca2+ activates protein kinase C (PKC) which activates the NADPH oxidase leading to increased superoxide (O2·-) and IsoLG-protein adduct formation.9 Adoptive transfer of salt-exposed DCs primes hypertension in response to a sub-pressor dose of angiotensin II.9

Identification of CD11c+ DCs from tissues has been previously limited to immunohistochemistry and RT-PCR, and isolation of DCs has been limited to cell sorting by flow cytometry. Although flow cytometry cell sorting is a powerful method for the isolation of immune cells, it is costly, time-consuming, and leads to a low yield of viable cells. Therefore, we have optimized a step by step protocol for tissue digestion, in vitro stimulation, and adoptive transfer of CD11c+ DCs to study hypertension.

Vanderbilt University's Institutional Animal Care and Use Committee have approved the procedures described herein. Mice are housed and cared for in accordance with the Guide for the Care and Use of Laboratory Animals (National Academies Press. Revised 2010).

1. Isolation of Spleens from Mice

NOTE: The spleen can be dissociated into a single cell suspension by combining mechanical dissociation plus enzymatic digestion.

9. Isolation of Spleens of Recipient Mice for Flow Cytometric Analysis 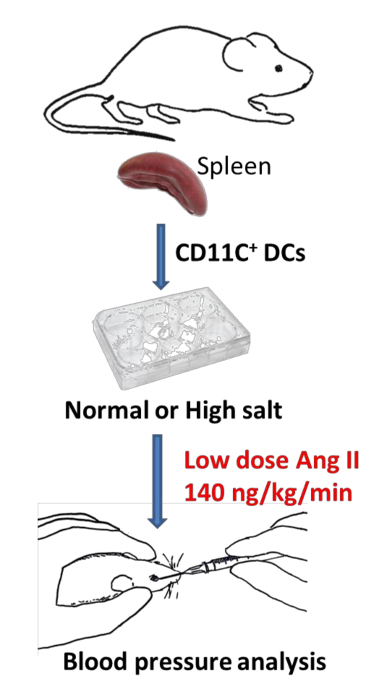 Figure 1: Illustration of adoptive transfer of in vitro treated CD11c+ DCs. CD11c+ DCs are isolated from spleens of mice and plated in either normal salt or high salt media for 24 h. CD11c+ DCs are then adoptively transferred retro-orbitally into naïve recipient mice. An osmotic minipump infusing low-dose angiotensin II is implanted and blood pressure is monitored for 14 days. This figure is adapted from Barbaro et al.)9. Please click here to view a larger version of this figure. 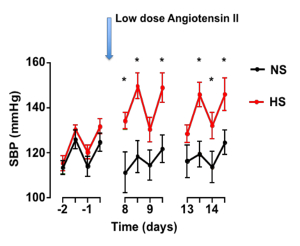 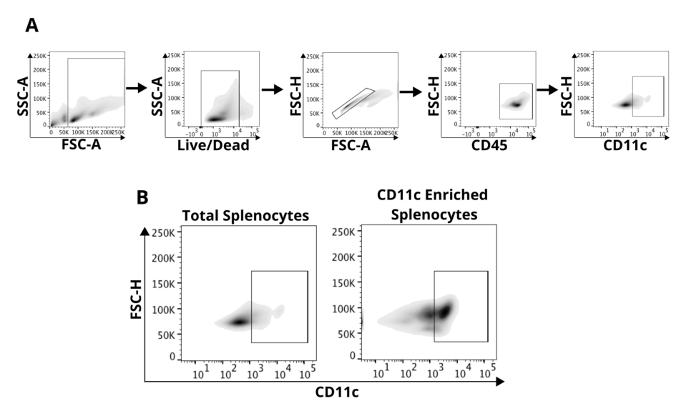 Figure 3: Flow cytometric analysis of magnetically separated splenocytes. (A) Gating strategy defining analysis of CD11c+ DC population. Cells are separated from debris and living cells are selected based upon exclusion of Live/Dead cell stain. Singlet cells are selected and then analyzed for CD45 positivity. CD45 cells are then analyzed for CD11c. (B) Following magnetic separation, there is significant enrichment of CD11c+ Cells. Please click here to view a larger version of this figure. 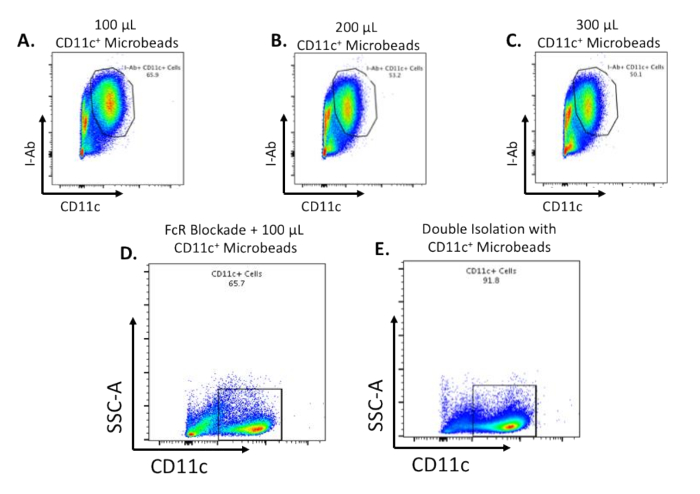 In the current protocol, we have optimized procedures to isolate CD11c+ DCs from spleens of mice and adoptively transfer them into naïve animals to study the role of DCs in salt-induced hypertension. This protocol can be adapted to isolate and adoptively transfer other immune cell subsets including macrophages, monocytes, and adaptive immune cells including T and B lymphocytes. We have optimized the splenic digestion process to achieve adequate cell survival and stability of DC surface expression markers. Moreover, we have optimized the protocol for in vitro stimulation of murine DCs with elevated sodium for optimal DC survival.

A critical step in this protocol is magnetic cell sorting. Magnetic cell sorting is a powerful and convenient tool to isolate specific murine cell types for studying immune cell function in disease. However, it is based on basic cell surface expression markers including CD11c that are often expressed on more than one immune cell type and often yields a less than desirable specific cell enrichment. Thus, for applications requiring a highly specific population of cells, it may be necessary to stain with several antibodies and sort by flow cytometry to eliminate contaminating cells. It is also important to confirm enrichment and purity of isolated cells using flow cytometry as shown in Figure 3 and Figure 4. In the current protocol, we have performed several troubleshooting steps including the use of different concentrations of the CD11c beads, blockade of FcR, and applying a second magnetic cell sorting protocol to the isolated cells. We found that double magnetic cell sorting achieved the highest degree of CD11c+ cell purity.

Another critical step in understanding the function of isolated DCs is in vitro stimulation with high salt and culture. While we find that this activates DCs causes them to predispose mice to hypertension,9 in vitro stimulation and culture can cause cell death and introduce other conditions that can potentially interfere with research findings. Moreover, to obtain enough viable DCs, it may be necessary to pool spleens of several mice to obtain one successful adoptive transfer. To eliminate the potential artifact effects of ex vivo culturing of cells, it may be necessary to adoptively transfer DCs isolated from high salt-fed mice. In prior studies, we isolated DCs that have been stimulated in vivo in mice infused with angiotensin II and found that these prime hypertension in recipient mice.14 In future studies, we can stimulate DCs in vivo using salt-induced hypertension including DOCA salt or L-NAME/high salt and determine if they activate T cells and prime hypertension.

Another limitation of this protocol is related to the technical aspect of successful intravenous adoptive transfer of immune cells. Retro-orbital vein injection of DCs can be difficult and should be done by a highly trained surgeon. Alternatively, adoptively transfer of DCs can be achieved through tail vein injection but this tends to be easier in white when compared to black mice.

Despite these technical limitations, magnetic cell sorting and adoptive transfer of DCs is an extremely powerful technique that allows identification and characterization of the functional role of DCs in cardio-renal disease states. It is important to evaluate engraftment and homing of cells in various organs related to cardiovascular disease after adoptive transfer. In previous studies, we adoptively transferred DCs from mice transgenic for Enhanced Green Fluorescent protein into naïve recipient mice. We then performed flow cytometry of various tissues in the recipient mice ten days later and found that these cells predominantly accumulate in the spleen of recipient mice, and to a lesser extent in the kidney and aorta. This was increased if the donor mouse was treated with angiotensin II. The relative engraftment of normal versus salt-treated DCs and the specific tissue sites still needs to be investigated.

In conclusion, we have outlined and optimized a detailed and reproducible protocol to magnetically separate, adoptively transfer, and assess DC populations by flow cytometry. This protocol can be applied to other immune cell populations (with some modifications) and other models of cardiovascular disease.