Alkaline phosphatase (ALP) is a common enzyme expressed in both prokaryotic and eukaryotic cells. It catalyzes the hydrolysis of phosphate monoesters from many molecules at basic pH and plays an indispensable role in phosphate metabolism. In humans, eukaryotic ALP is one of the most frequently used enzymatic signals in diagnosing various diseases, such as cholestasis and rickets. In S. aureus, ALP is detected exclusively on the cell membrane; it is also expressed as a secretory form as well. Yet, little is known about its function in biofilm formation.

The purpose of this manuscript is to develop a quick and reliable assay to measure ALP activity in S. aureus biofilm that does not require protein isolation. Using p-nitrophenyl phosphate (pNPP) as a substrate, we measured ALP activity in S. aureus biofilm formed in 96-well tissue culture plates. Activity was based on the formation of the soluble reaction product measured by 405 nm absorbance. The high throughput nature of the 96 well tissue culture plate method provides a sensitive and reproducible method for ALP activity assays. The same experimental set up can also be extended to measure other extracellular molecular markers related to biofilm formation.

Alkaline phosphatase (ALP) is ubiquitously expressed in both prokaryotic and eukaryotic cells1. It can catalyze the hydrolysis of monophosphate from different molecules such as nucleotides, proteins, alkaloids, phosphate esters and anhydrides of phosphoric acid. In humans, eukaryotic ALP is present in many tissues including liver, bone, intestine and placenta2. It plays important roles in protein phosphorylation, cell growth, apoptosis, stem cell processes as well as normal skeletal mineralization. Eukaryotic ALP is also a key serum indicator for the presence of diseases in bone, liver, and other tissues/organs when elevated3,4.

Prokaryotic ALP has been detected in a variety of bacterial cells, including E. coli5, S. aureus6,7 and some common rumen bacteria in the soils8. Bacterial ALP activity has been used as a biosensor in the detection of pesticides, heavy metals9 and bacterial contamination10. The constitutive expression of ALP has been used to identify Staphylococci11 and to differentiate Serratia from Enterobacter12. It is further suggested that constitutive ALP production is correlated with pathogenicity in staphylococci13. Although ALP has been studied in different settings3,4, yet little is reported for its activity and function in biofilms cultures.

A biofilm has been documented to have a differently functioning bacterial life as compared with its free-living bacterial cell counterpart14. In S. aureus, the formation of biofilm has been identified in a variety of clinical conditions and accounts for the antibiotic resistance and chronic inflammation15,16. Many molecules had been reported to be found in a biofilm matrix such as polysaccharides, proteins, nucleic acids, and lipids, but the mechanism of biofilm formation is not fully understood14. To understand the role of ALP in biofilm formation, we cultured S. aureus biofilms in 96 well tissue culture plates and measured the ALP activity using para-nitrophenylphosphate (pNPP).

The molecule pNPP is a ready-to-use substrate for ALP and has been widely used to measure ALP activity6,17,18. This colorimetric assay is based on the conversion of para-nitrophenyl phosphate (pNPP) to para-nitrophenol resulting in a colored product at 405 nm. Compared to other conventional ALP assay, such as agarose gel electrophoresis19, wheat germ agglutinin (WGA) precipitation, and WGA-HPLC20, this assay is highly specific, sensitive, easy to reproduce, and most importantly, allows for high throughput.

NOTE: The S. aureus biofilm is cultured as previously described6,21.

Figure 1 shows a representative result of ALP activity from biofilm cultures of S. aureus in 96 well tissue culture plates. 75 μL of commercially available pNPP solution was added to each well and incubated at room temperature. After incubation for different times (0 min, 15 min, 30 min, 45 min, 60 min, and 75 min, respectively) 75 μL of 5 M NaOH was added to stop the reaction. The product was then measured in a 96 well plate reader at 405 nm. Each time point was repeated in triplets from a single 96 well plate, and the entire experiment was repeated in 3 individual 96 well plates. 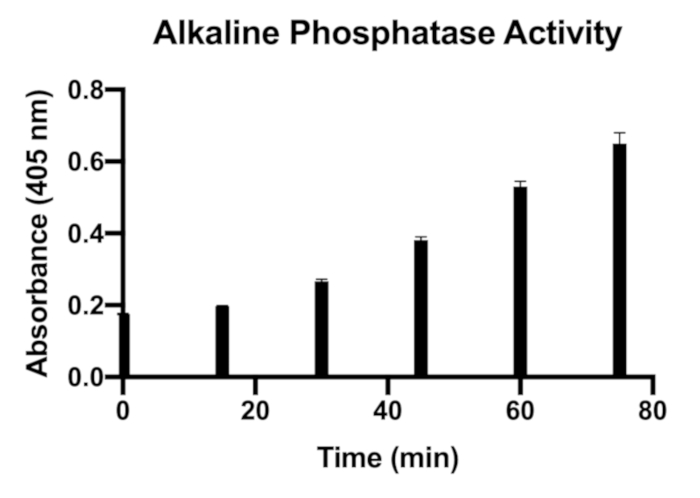 In our assay, we used pNPP as the ALP substrate. This is a working solution designed for ELISA and no dilution is needed. After hydrolysis by ALP, a yellow product develops and can be measured at 405 nm. At the end of the enzymatic reaction, we briefly centrifuged the 96 well plate and transferred the supernatant to a fresh 96 well plate to measure absorbance using the plate reader. We found that this extra centrifugation step is critical, since it increases the consistency of absorbance at 405 nm, probably by eliminating any possible suspended cells incurred during enzymatic reaction.

For biofilm formation, we use 200 μL of a 1:100 (v/v) dilution for overnight culture as reported6,21. This is the optimum dilution for S. aureus to form biofilm compared to other dilutions (data not shown). Since the purpose of this paper is to measure ALP activity in biofilm, it was crucial that we maintained optimum biofilm culture conditions. This was further emphasized by the choice in using glucose at 10 g/L for optimum biofilm growth6. The dilution factor and glucose concentration need to be optimized if different bacterial cells are used for biofilm formation.

During incubation of the biofilm culture with pNPP substrate, it will take time for the colored product to develop. We measured ALP activity after 15 and 30 min time points which is when the visible yellow color is observed. With the current concentration, we noticed an increased ALP activity for up to 75 min as indicated in Figure 1. After 75 min, no increase of the ALP activity was observed.

Finally, since ALP in S. aureus is an exclusively membrane bound protein7, its activity can be tested without cell lysis. There are benefits to an enzyme activity assay that does not require whole cell destruction. Notably, the protein isolation process can sometimes yield a lower active enzyme quantity22. However, this protocol cannot be used if ALP is not in its membrane bound form.

As previously reported6, ALP activity is elevated in biofilm culture as compared to its platonic counterpart. The experimental settings used in the current study can be extended to investigate factors/compounds that affect ALP activity in S. aureus biofilm. The findings from these studies will provide additional insight into how to control bacterial biofilm formation.

We thank William Rainey Harper College and the University of Illinois at Chicago for the facility to conduct these experiments. We also thank McGraw Hill Foundation for their generous support.