Skip to content
Trial ends in Request Full Access Tell Your Colleague About Jove
This is a sample clip. If you're new to JoVE sign up and start your free trial today to watch the full video! If your institution has an existing subscription, log in or sign up to access this video.
Engineering
Author Produced
CITE THIS  SHARE

This article describes the growth of epitaxial films of Mg3N2 and Zn3N2 on MgO substrates by plasma-assisted molecular beam epitaxy with N2 gas as the nitrogen source and optical growth monitoring.

This article describes a procedure for growing Mg3N2 and Zn3N2 films by plasma-assisted molecular beam epitaxy (MBE). The films are grown on 100 oriented MgO substrates with N2 gas as the nitrogen source. The method for preparing the substrates and the MBE growth process are described. The orientation and crystalline order of the substrate and film surface are monitored by the reflection high energy electron diffraction (RHEED) before and during growth. The specular reflectivity of the sample surface is measured during growth with an Ar-ion laser with a wavelength of 488 nm. By fitting the time dependence of the reflectivity to a mathematical model, the refractive index, optical extinction coefficient, and growth rate of the film are determined. The metal fluxes are measured independently as a function of the effusion cell temperatures using a quartz crystal monitor. Typical growth rates are 0.028 nm/s at growth temperatures of 150 °C and 330 °C for Mg3N2 and Zn3N2 films, respectively.

The II3-V2 materials are a class of semiconductors that have received relatively little attention from the semiconductor research community compared to III-V and II-VI semiconductors1. The Mg and Zn nitrides, Mg3N2 and Zn3N2, are attractive for consumer applications because they are composed of abundant and non-toxic elements, making them inexpensive and easy to recycle unlike most III-V and II-VI compound semiconductors. They display an anti-bixbyite crystal structure similar to the CaF2 structure, with one of the interpenetrating fcc F-sublattices being half-occupied2,3,4,5. They are both direct band gap materials6, making them suitable for optical applications7,8,9. The band gap of Mg3N2 is in the visible spectrum (2.5 eV)10, and the band gap of Zn3N2 is in the near-infrared (1.25 eV)11. To explore the physical properties of these materials and their potential for electronic and optical device applications, it is critical to obtain high quality, single crystal films. Most work on these materials to date has been carried out on powders or polycrystalline films made by reactive sputtering12,13,14,15,16,17.

Molecular beam epitaxy (MBE) is a well-developed and versatile method for growing single-crystal compound semiconductor films18 that has the potential to yield high quality materials using a clean environment and high-purity elemental sources. Meanwhile, MBE rapid shutter action enables changes to a film at the atomic layer scale and allows for precise thickness control. This paper reports on the growth of Mg3N2 and Zn3N2 epitaxial films on MgO substrates by plasma-assisted MBE, using high purity Zn and Mg as vapor sources and N2 gas as the nitrogen source.

The surface of the substrate and the films were monitored in situ by RHEED. Figure 5A shows the RHEED pattern of a bare substrate with the electron beam incident along the [110] direction of the substrate. RHEED patterns for the deposited films in Figure 5B,C show that the crystal lattices of the Zn3N2 and Mg3N2 thin films are oriented in the plane of the substrate surface, as expected in the case of epitaxial growth. The disadvantage of RHEED for growth monitoring under the conditions used here is that the growth process must be stopped to allow the pressure to drop to 10-7 Torr and turn on the electron gun.

In contrast with RHEED, in situ optical reflectivity measurements are not affected by pressure in the chamber. To obtain the growth rate, in situ optical reflectivity was fit as a function of time shown in Figure 6 using Equation 1. In this equation, growth time t is the independent variable, and the optical constants of the film (n1, k1) and growth rate are fitting parameters. In Figure 6, the MgO substrate refractive index, angle of incidence, and wavelength are n2 = 1.747, θ0 = 36.5°, and λ = 488 nm, respectively. The fitted refractive index of the film is n1 = 2.65, extinction coefficient is k1 = 0.54, and growth rate is = 0.031 nm/s for the Zn3N2 thin film as shown in Figure 6A. Similarly, the best fit refractive index for the Mg3N2 film is n1 = 2.4, extinction coefficient is k1 = 0.09, and growth rate is = 0.033 nm/s as shown in Figure 6B. The overall decrease in the specular reflection with time in Figure 6B is believed to be caused by an increase in surface roughness scattering as the Mg3N2 thin film becomes thicker. The effect of the roughness scattering was simulated by multiplying the calculated reflectivity with a decaying exponential, e-βt, where β = 810-5 s-1 and the growth time t ismeasured in seconds.

Upon exposure to air, the uncapped yellow Mg3N2 films faded within minutes to a translucent white color. On the other hand, the Mg3N2 films that were capped with MgO were relatively stable. To further protect the capped Mg3N2 films from oxidation, the Mg3N2/MgO heterostructures were coated with a CaF2 layer deposited by electron beam evaporation. Uncapped Zn3N2 is more stable; however, the initially black Zn3N2 films also oxidized over time and turned grey within a few months. The oxidation reaction is believed to involve the formation of magnesium hydroxide and release ammonia according to the following chemical reaction20. A ZnO layer deposited using a similar method to the MgO can also be used as a protective layer to prevent oxidation. 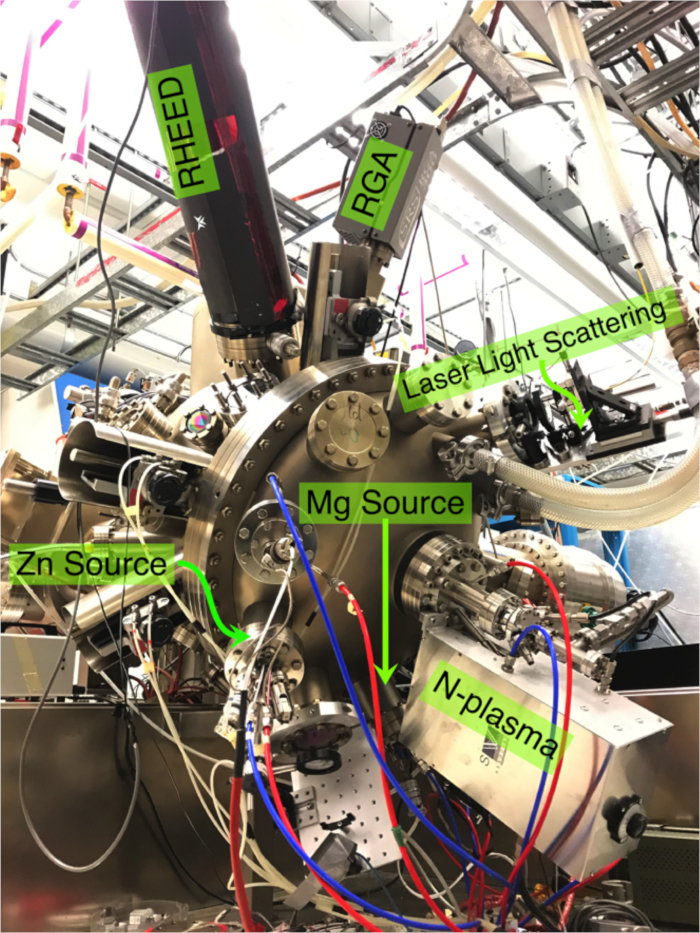 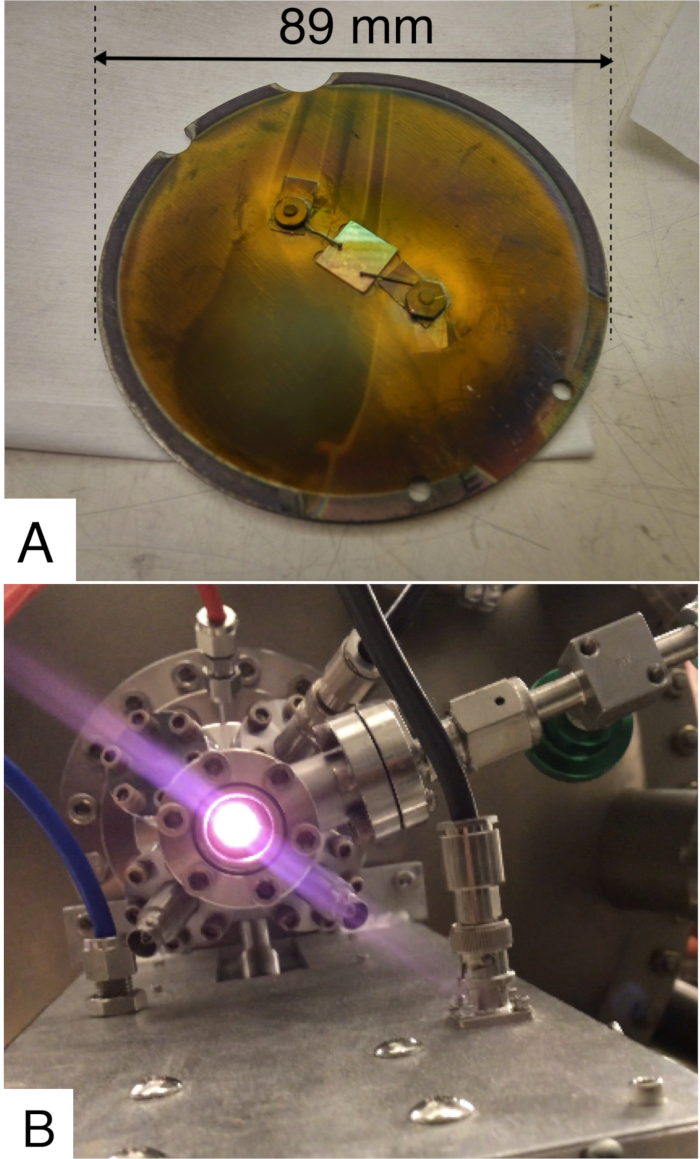 Figure 2: Substrate holder and glow from plasma source. (A) Molybdenum sample holder plate with two tungsten wire clips holding the square MgO substrate in place. (B) Purple glow originating from the back window of the plasma source when operating with N2 gas. Please click here to view a larger version of this figure. 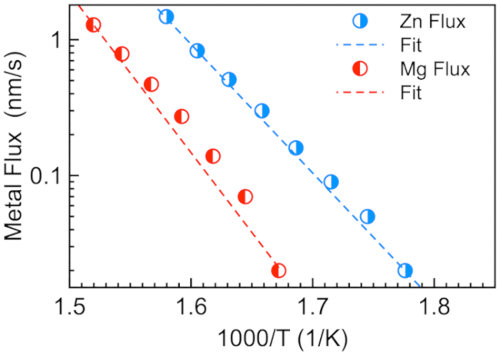 Figure 3: Metal flux as a function of effusion cell temperature. The lines are fit to the temperature dependence of the metal fluxes using an Arrhenius relation as discussed in the text. Please click here to view a larger version of this figure. 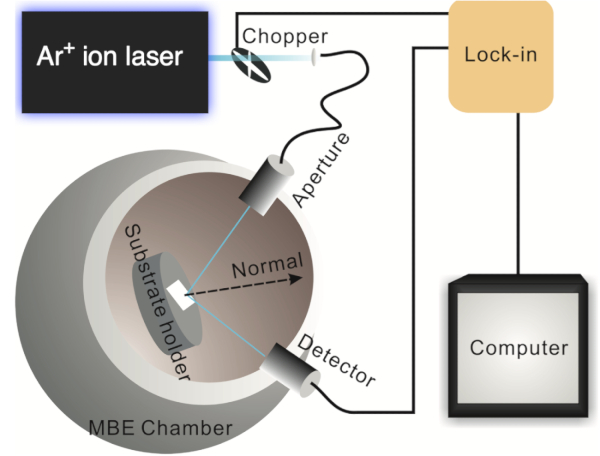 Figure 4: Schematic of the in-situ laser light scattering setup. Please click here to view a larger version of this figure.

A variety of considerations is involved in the choice of substrates and establishing the growth conditions that optimize the structural and electronic properties of the films. The MgO substrates are heated at high temperature in air (1000 °C) to remove carbon contamination from the surface and improve the crystalline order in the substrate surface. Ultrasonic cleaning in acetone is a good alternative method to clean the MgO substrates.

High growth temperature increases the mobility of the ad-atoms on the growing surface and may be expected to produce material with fewer structural defects. However, at high substrate temperatures, the growth rate is lower, which is interpreted as being due to re-evaporation of metal atoms from the surface. At high metal flux, film growth rate is limited by the supply of active nitrogen. The active nitrogen is maximized at high rf power applied to the plasma source (300 W max) and at a high nitrogen flow rate. The N2 flow rate is limited by the maximum pressure in the growth chamber, which in this case was in the mid 10-5 Torr range. Ammonia is a possible alternative nitrogen source. Mg and Zn will react with NH3 at a high temperature without plasma activation; however, it is unclear whether the residence time of Mg and Zn atoms on the surface will be long enough to support film growth at temperatures for which NH3 will react with the metals.

In these experiments, effusion cells were used with pyrolytic boron nitride (PBN) crucibles with capacities of 40 cc for Mg and 25 cc for Zn. Figure 3 shows the temperature dependence of the Mg and Zn fluxes from the effusion cells. The straight lines in Figure 3 are fit to the measured temperature dependence of the fluxes. The fits have the form Flux = A exp(-B/kT), and the fitting parameters (A,B) are (8.5 x 1017 nm/s, 2.3 eV) and (1.3 x 1015 nm/s, 1.9 eV) for the Mg and Zn sources, respectively. The flux approximately doubles with each 10 °C and 12 °C increase in the effusion cell temperature for Mg and Zn, respectively. For the growth illustrated in Figure 6, the metal fluxes were near the maxima in Figure 3 (~1 nm/s with Mg flux higher than Zn flux) but the film growth rates were only 0.03 nm/s. This shows that the metal utilization efficiency is low, with Mg being lower than Zn and most of the metal re-evaporating.

The high N2 background pressure during growth precludes the continuous monitoring of the film growth with RHEED. Differential pumping of the RHEED gun can solve this problem. In situ optical reflectivity measurements serve as a complementary monitoring tool that is not affected by gas pressure and provides an accurate and reliable technique for determining the growth rate. The non-specular or diffuse reflectivity of the substrate can also be measured in situ and will provide information on surface roughness during growth.

In conclusion, this protocol describes how to grow single crystal films of Mg3N2 and Zn3N2 by plasma-assisted molecular beam epitaxy and provides suggestions for how the growth process can be changed to further improve film quality. These materials did not show photoluminescence at either room temperature or a low temperature. There is a need to further reduce the defect density in the films. Mg3N2-Zn3N2 alloys can also be grown by plasma-assisted molecular beam epitaxy.

This work was supported by the Natural Sciences and Engineering Research Council of Canada.