Here, an antibody-free in vitro assay for direct analysis of methyltransferase activity on synthetic or in vitro transcribed RNA is described.

There are more than 100 chemically distinct modifications of RNA, two thirds of which consist of methylations. Interest in RNA modifications, and especially methylations, has re-emerged due to the important roles played by the enzymes that write and erase them in biological processes relevant to disease and cancer. Here, a sensitive in vitro assay for accurate analysis of RNA methylation writer activity on synthetic or in vitro transcribed RNAs is provided. This assay uses a tritiated form of S-adenosyl-methionine, resulting in direct labeling of methylated RNA with tritium. The low energy of tritium radiation makes the method safe, and pre-existing methods of tritium signal amplification, make it possible to quantify and to visualize the methylated RNA without the use of antibodies, which are commonly prone to artifacts. While this method is written for RNA methylation, few tweaks make it applicable to the study of other RNA modifications that can be radioactively labeled, such as RNA acetylation with 14C acetyl coenzyme A. Overall, this assay allows to quickly assess RNA methylation conditions, inhibition with small molecule inhibitors, or the effect of RNA or enzyme mutants, and provides a powerful tool to validate and expand results obtained in cells.

DNA, RNA and proteins are subject to modifications that tightly regulate gene expression1. Among these modifications, methylations occur on all three biopolymers. DNA and protein methylations have been very well studied during the last three decades. In contrast, interest in RNA methylation has been only recently reignited in light of the important roles that proteins that write, erase or bind RNA methylations play in development and disease2. In addition to better known functions in the abundant ribosomal and transfer RNAs, RNA methylation pathways regulate specific messenger RNA stability3,4, splicing5 and translation6,7, miRNA processing8,9 and transcriptional pausing and release10,11.

Here, a simple and robust method for in vitro verification of RNA methyltransferase activity in the setting of a molecular biology lab is reported (summarized in Figure 1). Many studies assess the activity of an RNA methyltransferase through dot-blot with an antibody against the RNA modification of interest. However, dot-blot does not verify the integrity of the RNA upon incubation with the RNA methyltransferase. This is important because even minor contaminations of recombinant proteins with nucleases can lead to partial RNA degradation and confounding results. Moreover, even highly specific RNA modification antibodies can recognize unmodified RNAs with specific sequences or structures. The in vitro RNA methyltransferase assay reported here takes advantage of the fact that the S-adenosyl methionine can be tritiated on the methyl group donor (Figure 1), allowing for the methylated RNA to be accurately detected without the use of antibodies. Instructions are provided for in vitro transcription and purification of a transcript of interest and testing of the methylation of said transcript by the enzyme of interest. This method is flexible and robust, and can be adjusted according to the needs of any given project. For example, in vitro transcribed and purified RNAs, chemically synthesized RNAs, but also cellular RNAs can be used. This assay provides quantitative information in the form of scintillation counts, as well as qualitative information by showing where exactly the methylated RNA runs on a gel. This can provide unique insight into the function of an RNA methyltransferase, particularly when using cellular RNAs as a substrate, as it provides a method to directly observe the size of the RNA or RNAs that are targeted for methylation.

1. In vitro transcription and gel purification of the target RNA

As mentioned previously, it may be necessary to optimize the length of the transcription reaction prior to the gel purification step. Transcription reactions that run for too long can result in extremely high amounts of RNA production, making downstream identification of the correct transcript difficult. It is also important to verify the identity of the purified transcript by Reverse Transcription and quantitative PCR (RTqPCR) using specific primers.

In vitro RNA methyltransferase assay
Figure 3 shows a representative result of an RNA methyltransferase assay described in the protocol using the lower limit of our recommended RNA and protein concentrations. This assay allows for both quantitative results from the scintillation counts, as well as qualitative results from the autoradiogram. Here, MePCE, an RNA methyltransferase known to methylate 7SK10, was shown to be able to also methylate U6. Moreover, as recently shown for 7SK16, binding of histone H4 to MePCE also inhibits U6 methylation. We were able to observe this in both the scintillation count (Figure 3C) and the autoradiogram (Figure 3B), showing the robustness of this protocol. 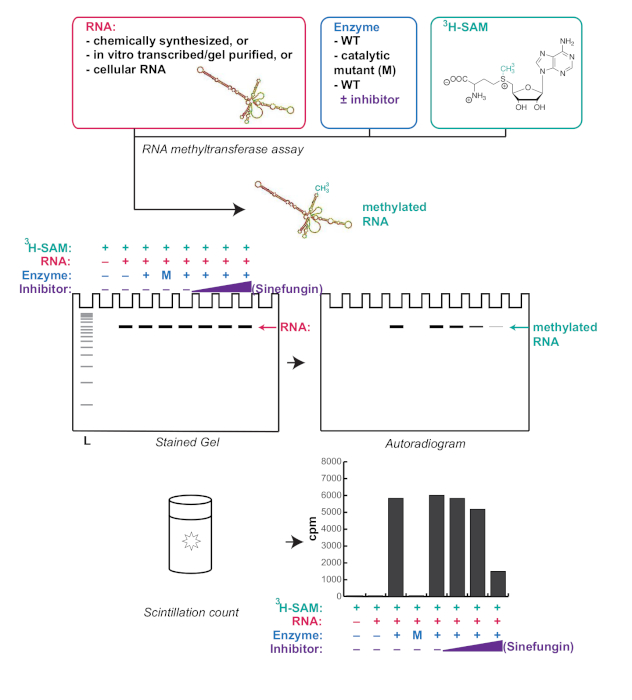 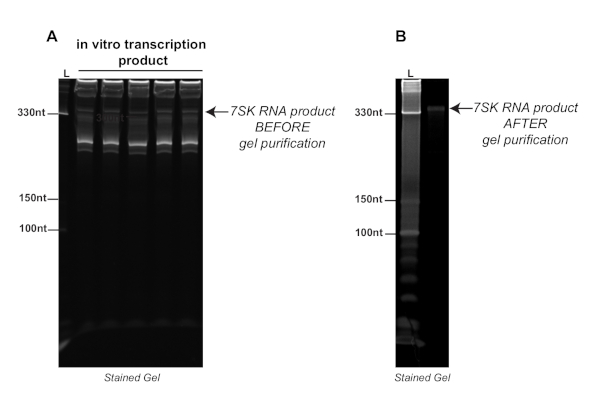 Figure 2. Representative experiment showing the product of in vitro transcription before (A) and after (B) purification on a denaturing urea-polyacrylamide 8% gel stained with nucleic acid stain. The arrows point to the 7SK transcript before and after gel purification. L: ladder. Please click here to view a larger version of this figure. 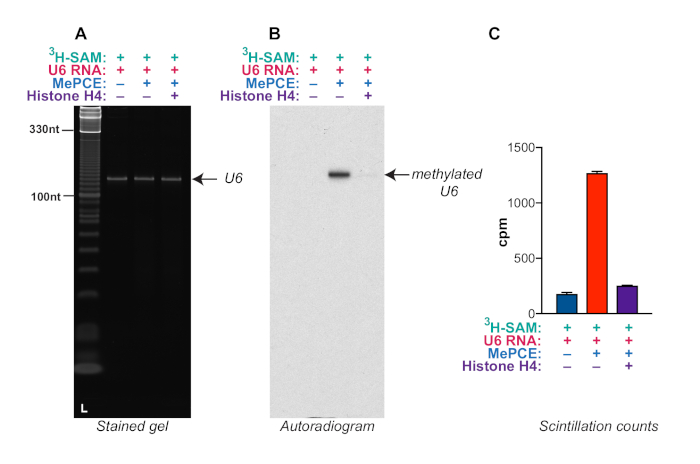 Figure 3. In vitro RNA methyl-transferase assay performed with MePCE against U6. In vitro methyltransferase assay using recombinant GST-MePCE (25 nM), 3H-radioactive SAM as methyl group donor and in vitro transcribed U6 RNA (50 nM) as substrate. The autoradiogram was exposed for 2 weeks in order to detect the residual activity (250 cpm) in the +Histone H4 sample. Please click here to view a larger version of this figure.

Here, a simple and robust method for in vitro verification of RNA methyltransferase activity towards specific transcripts is reported. The assay takes advantage of the fact that S-adenosyl methionine can be tritiated on the methyl group donor (Figure 1), allowing for the methylated RNA to be accurately detected without the use of antibodies. However, it is important to note that this assay cannot indicate which residue or chemical group is methylated by the enzyme. To identify or to verify that a specific residue is methylated, other methods such as mutational analysis, reverse transcription block or mass spectrometry analysis of the RNA substrate can be used in conjunction with the RNA methyltransferase assay.

The choice of RNAs and their mode of synthesis depends on the size of the RNA. Specific RNAs of sizes between 18 and 120 nt can be conveniently custom-synthesized from many reputed nucleic acid providers. However, most commonly, specific RNAs of various sizes are in vitro transcribed. The DNA templates for in vitro transcription can be generated in various ways, and require the sequence of interest to be located downstream of a T7 or SP6 promoter. When precise ends of RNAs are important, the pRZ plasmid is recommended17. The high sensitivity of the assay (Figure 3) also allows to substitute a purified RNA with a mixture of cellular RNA, either total or messenger RNAs for example. Indeed, the gel and autoradiogram provide a method to directly observe the size of the RNA(s) targeted for methylation.

The conditions reported here in step 2.1 of the protocol are optimal for the BIN3 family of methyltransferases, which has two homologs in humans, MePCE10 and BCDIN3D9. It is important to emphasize that the assay conditions need to be adjusted to the specific protein and RNA of interest. For example, it was shown that the presence of MgCl2 decreases BCDIN3D activity18, however, MgCl2 can be an important coordinator of RNA structure, and could thus constitutes an important component of the assay for other RNA methyltransferases.

The advantage of using an autoradiogram, which can be exposed for an extended period of time, is that it can allow to detect very weak activity that is not detected in the scintillation assay. Usually this indicates that the protein is a methyltransferase, but that one or more of the reaction conditions or reagents need to be optimized: enzyme; substrate, cofactor, buffer conditions, etc9. For example, the enzyme purification may need to be improved to remove or change the position of the tag. It may also be that the RNA used as a substrate needs to be folded properly or to interact with another protein or RNA factor to be methylated by the enzyme. Thus, pre-existing literature and/or own results in cells need to be carefully reviewed to set-up the assay conditions for the enzyme and RNA of interest.

The assay is also extremely flexible. For example, it can be a precursor step to another type of assay, such that the radioactively methylated RNA is used in quantitative and qualitative demethylase assays11, or in RNA binding assays allowing to specifically visualize the behavior of the methylated RNA compared to the unmodified one. The assay can also be lightly adjusted to analyze the modification of RNAs that use coenzymes that can be radioactively labeled, such as acetyl coenzyme A for the study of RNA acetylation19,20.

The authors would like to thank Dr. Turja Kanti Debnath for his help with ChemDraw. Research in the Xhemalçe lab is supported by the Department Of Defense - Congressionally Directed Medical Research Program - Breast Cancer Breakthrough Award (W81XWH-16-1-0352), NIH Grant R01 GM127802 and start-up funds from the Institute of Cellular and Molecular Biology and the College of Natural Sciences at the University of Texas at Austin, USA.