Skip to content
Trial ends in Request Full Access Tell Your Colleague About Jove
This is a sample clip. If you're new to JoVE sign up and start your free trial today to watch the full video! If your institution has an existing subscription, log in or sign up to access this video.
Genetics
Author Produced
CITE THIS  SHARE

In this article, we present the protocol that is described as high-resolution melting analysis (HRM)-based Target Induced Local Lesions In Genomes (TILLING). This method utilizes fluorescence changes during the melting of the DNA duplex and is suitable for high-throughput screening of both insertion/deletion (Indel) and single base substition (SBS).

Target Induced Local Lesions In Genomes (TILLING) is a strategy of reverse genetics for the high-throughput screening of induced mutations. However, the TILLING system has less applicability for insertion/deletion (Indel) detection and traditional TILLING needs more complex steps, like CEL I nuclease digestion and gel electrophoresis. To improve the throughput and selection efficiency, and to make the screening of both Indels and single base substitions (SBSs) possible, a new high-resolution melting (HRM)-based TILLING system is developed. Here, we present a detailed HRM-TILLING protocol and show its application in mutation screening. This method can analyze the mutations of PCR amplicons by measuring the denaturation of double-stranded DNA at high temperatures. HRM analysis is directly performed post-PCR without additional processing. Moreover, a simple, safe and fast (SSF) DNA extraction method is integrated with HRM-TILLING to identify both Indels and SBSs. Its simplicity, robustness and high throughput make it potentially useful for mutation scanning in rice and other crops.

Mutants are important genetic resources for plant functional genomics research and breeding of new varieties. A forward genetics approach (i.e. from mutant selection to gene cloning or variety development) used to be the main and sole method for the use of induced mutations about 20 years ago. The development of a novel reverse genetics method, TILLING (Targeting Induced Local Lesions In Genomes) by McCallum et al.1 opened a new paradigm and it has since been applied in a great number of animal and plant species2. TILLING is particularly useful for breeding traits that are technically difficult or costly to be determined (e.g., disease resistance, mineral content).

TILLING was initially developed for screening point mutations induced by chemical mutagens (e.g., EMS1,3). It includes the following steps: the establishment of a TILLING population(s); DNA preparation and pooling of individual plants; PCR amplification of target DNA fragment; heteroduplexes formation by denaturation and annealing of PCR amplicons and cleavage by CEL I nuclease; and identification of mutant individuals and their specific molecular lesions3,4. However, this method is still relatively complex, time consuming, and low-throughput. To make it more efficient and with higher throughput, many modified TILLING methods have been developed, such as deletion TILLING (De-TILLING) (Table 1)1,3,5,6,7,8,9,10,11,12.

HRM curve analysis, which is based on fluorescence changes during the melting of the DNA duplex, is a simple, cost-effective, and high-throughput method for mutation screening and genotyping13. HRM has already been widely used in plant research including HRM based TILLING (HRM-TILLING) for screening SBS mutations induced by EMS mutagenesis14. Here, we presented detailed HRM-TILLING protocols for screening of mutations (both Indel and SBS) induced by gamma (γ) rays in rice.

A DNA sample from an individual seedling was used for amplification and the respective fragment was sequenced. The mutation type and position on the genes could be confirmed by the sequencing chromatograms (Figure 2). Three mutations including two Indels and one SBS were identified from 4,560 M2 seedlings (Table 2). It was found that all three mutant parts were heterozygous at the mutation site (Figure 2). 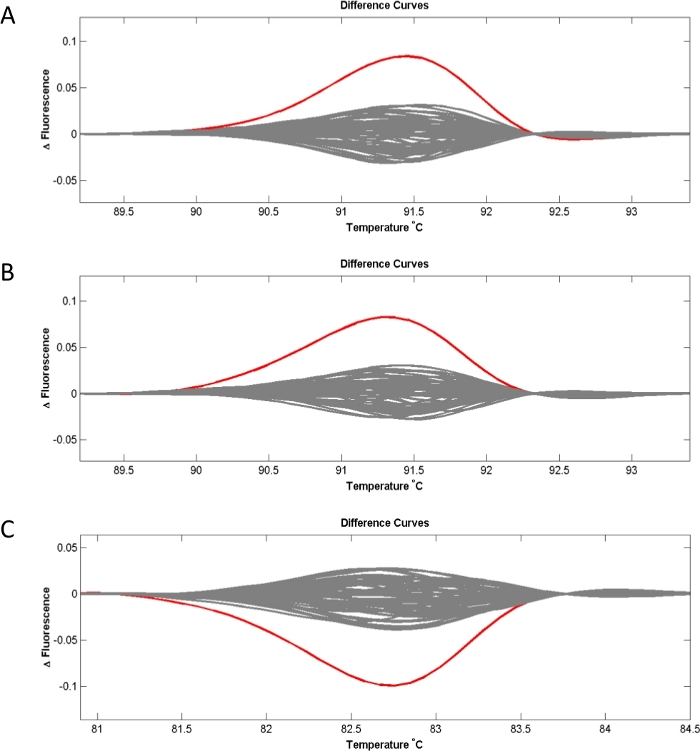 Figure 1: HRM-TILLING of M2 Seedlings for Mutations in OsLCT1 (A, B) or SPDT (C) Genes. The wild type was chosen as reference for the development of fluorescence difference curves. The mutants showed significantly different HRM curves with ΔFs > 0.05 at temperatures of 90.0-92.0 °C and 81.5-83.5 °C, respectively. This figure has been modified from Li et al.19. Please click here to view a larger version of this figure. 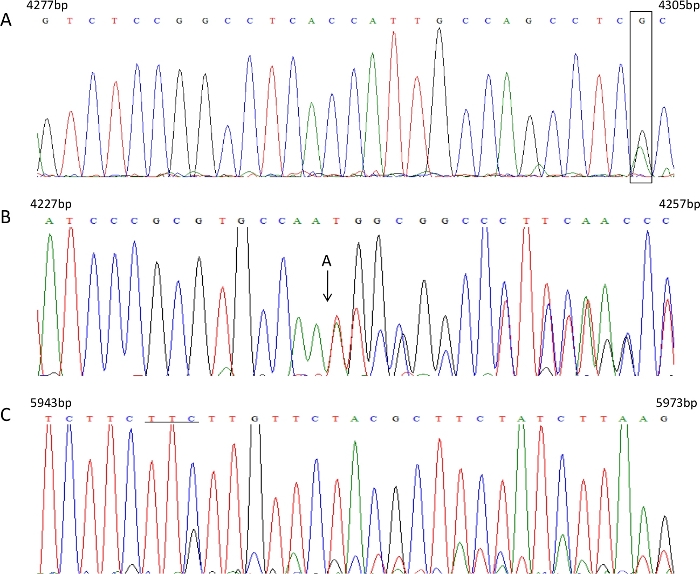 Figure 2: Sequencing Chromatograms of Targeted Fragments of Mutants. The rectangular box indicates a heterozygous site with a mutation of G→A at 4304 bp of OsLCT1 (A); one single nucleotide A insertion at the 4240 bp of OsLCT1 is indicated by an arrow (B); and a TTC trinucleotide deletion at the position of 5948-5950 bp of SPDT is indicated by a black line (C). This figure has been modified from Li et al.19. Please click here to view a larger version of this figure.

Table 1: The advantages and disadvantages of various TILLING approaches.

TILLING has proved to be a powerful reverse genetic tool for identifying induced mutations for gene functional analysis and crop breeding. For some traits not easily observed or determined, TILLING with high-throughput PCR-based mutation detection can be a useful method to obtain mutants for different genes. HRM-TILLING method has been used in EMS-mutagenized populations of tomato12, wheat11 and grapevine20 for mutation screening. In this paper, a simpler and more powerful HRM-TILLING was demonstrated, applicable for both Indel and SBS mutation screening.

To improve the efficiency, DNAs were extracted using the SSF method instead of the regular CTAB method, which is time- and labor-consuming and requires toxic chemical agents. Si et al.21 compared the quality of DNA extracted using SSF and CTAB method. Although it was found that DNA from SSF extraction had purity inferior to that of CTAB extraction, it could meet the requirements of PCR and for HRM analysis in rice. However, it should be noted that the DNA from SSF extraction could not be stored for a long time, hence it is not suitable for establishing a permanent mutant library.

In a previous study, pooled samples with 1/8 mutant DNA could be differentiated from wild-type by HRM analysis in both EMS and gamma mutagenized populations14,19. Considering M2 plants could be heterozygous for induced mutations, pooling of four M2 plants was recommended for detecting mutations by HRM-TILLING.

To obtain more mutants, it is also critical to develop mutagenized populations with a high mutation frequency. Gamma rays had significant effect on the growth of M1 plants. It has been reported that treatment with higher dose resulted in increased frequency of chlorophyll-deficient mutants and inferior performance of fertility, seed set and plant height in M2 plants18. Furthermore, it was known that tolerance to mutagens varied among different species. Therefore, the dose resulting in about 50% lethality (LD50) in M1 plants was considered as the optimum irradiation dose. However, Li et al. found different mutation doses (165, 246 and 389 Gy) resulted in similar mutation rates in the whole genome by resequencing, which implied a low dose could be applied to generate mutations22.

This paper showed the example of HRM-TILLING for mutation screening of gamma induced plants. The HRM-TILLING described in this paper should also be applicable for screening mutations in EMS-mutagenized populations.

The authors declare that they have no conflict of interest.