In this protocol, we describe procedures to qualitatively and quantitatively analyze developmental phenotypes in mice associated with congenital heart defects.

Congenital heart defects (CHD) are the most common type of birth defect in humans, affecting up to 1% of all live births. However, the underlying causes for CHD are still poorly understood. The developing mouse constitutes a valuable model for the study of CHD, because cardiac developmental programs between mice and humans are highly conserved. The protocol describes in detail how to produce mouse embryos of the desired gestational stage, methods to isolate and preserve the heart for downstream processing, quantitative methods to identify common types of CHD by histology (e.g., ventricular septal defects, atrial septal defects, patent ductus arteriosus), and quantitative histomorphometry methods to measure common muscular compaction phenotypes. These methods articulate all the steps involved in sample preparation, collection, and analysis, allowing scientists to correctly and reproducibly measure CHD.

CHDs are the most common type of birth defect in humans and are the leading cause of birth defect-related deaths1,2,3,4,5,6. Although about 90% of newborn children survive CHD, it is frequently associated with significant morbidity and medical interventions over the years, imposing a heavy burden on the patients' lives and the healthcare system7,8,9,10. Outside of purely genetic factors, the causes of CHD are poorly understood4. Unidentified causes account for ~56-66% of all CHD cases according to the American Heart Association and other sources2,3,4,11. Well-known factors include genetic mutations, CNVs, de novo single nucleotide variants, and aneuploidy. It is suspected that environmental and dietary factors are also important sources contributing to CHD, as suggested by epidemiological studies linking maternal lifestyle2,12, economic deprivation, and race13, and by research into dietary factors such as folic acid11,14 and the bioactive lipid retinoic acid15,16. Investigating the mechanisms and causes of CHD and other cardiovascular defects is important to develop preventive strategies and novel therapeutic options1,4,17,18,19.

The developing mouse is a cornerstone model for studying CHD in mammals. However, some of the methods and analyses employed, such as dissections preserving heart morphology, analysis of developmental stages, and identification of CHD-associated defects, can be daunting for scientists that are new to the analysis of murine hearts. The goal of the methods described in this protocol is to offer qualitative and quantitative guidelines for these processes. Thus, in this protocol we explain how to perform timed matings to produce embryos of the desired gestational stage, dissect pregnant females for intact heart recovery (including associated tissues such as the outflow tract), heart fixation and preparation for cryostat sectioning, basic histology methods, quantitative analyses of common heart defects, and qualitative analysis of heart muscle compaction, a common precursor phenotype to some types of CHD.

All animals used in the experiments referenced in this paper were treated using the animal care guidelines of the Michigan State University Institutional Animal Care and Use Committee (IACUC).

2. Dissection of females and embryos for heart recovery

NOTE: Tissues can either be prepared using OCT (optimal cutting temperature) embedding or paraffin embedding. There are advantages and disadvantages to either method and the goal of the analysis should be considered when deciding which embedding method should be used.

The muscle compaction index was compared between hearts developing under two different environments, a control and an experimental group. These protocols were used to analyze the compaction of muscle tissue quantitatively, which permitted statistical analysis. Muscle compaction was shown to be significantly reduced in the experimental hearts relative to the embryos that developed in nonexperimental conditions.

Embryos were discarded if the observation timing seemed inaccurate. Although stunted growth of embryos could be a result of the treatment of the experiment, and there is a range in developmental progress, breeding was spaced out sufficiently to ensure the timing of embryo development. Staging of the embryos was done using Theiler Staging21. Samples were considered to be poorly sliced if the slices did not reflect consistency or if they had obvious tears or folds. Staining provided enough contrast to make out the tissue edges, but was not so dark as to make cell features indistinguishable. Slides were then imaged with an inverted microscope with a 40x objective. MCI values were calculated using ImageJ software and Microsoft Excel. These MCI values were analyzed using a T-test. 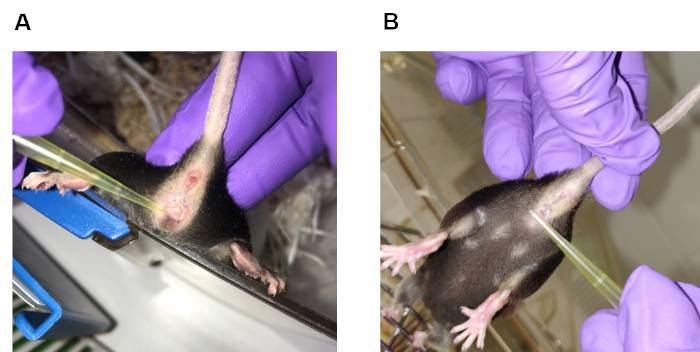 This protocol explores the techniques involved in the analysis of cardiac development in embryonic hearts. Some limitations of this method are the required physical dexterity for the preparatory techniques, which may require practice, and skill with microscope imaging. If the slices obtained at the cryostat are messy, the hematoxylin and eosin staining will not be clear, or if the images taken at the microscope have poor lighting, then the method used with ImageJ will not work. A limitation of the threshold feature of ImageJ software is that it selects pixels located on one end of a threshold dependent on the pixel value. Therefore, any pixels that exist on the wrong side of the threshold will be incorrectly included or excluded in the calculation. Ultimately, troubleshooting will be necessary for adoption of the protocols for use in a study.

In the event that heart extraction is too difficult, consider skipping to step 2.8. Additionally, consider removing more than just the heart and lungs from the chest cavity. The target then becomes larger and easier to manipulate, and direct contact between the heart and the fine forceps is minimized. When cryostat sectioning, the experimental samples will always be directly compared to control samples. This allows some room for user error so long as the error is consistent in all samples. To minimize user error and avoid false results, make sure comparable sections are obtained from both treatment groups. For example, if more than one person is producing sections, make sure that one individual produces an even number of sections for controls and all treatment groups, and not just one subgroup. Lastly, when thresholding images on ImageJ, the threshold tool is used to allow maximum freedom in selecting pixels that represent tissue and pixels that do not. If necessary, adjust the contrast of the images to further intensify the pixel value of the background from the pixel value of the tissue. Although there are troubleshooting options, the techniques still require a high degree of skill. However, performing this protocol provides access to data that are not typically measured in other cardiac developmental research studies. Thus, utilizing features of this protocol might make a significant contribution to a scientific investigation.

Identifying the impacts of experimental treatments in cardiology research often is investigated through morphology assessment. This is especially the case in developmental biology, in which the placenta makes it difficult for physiological features of developing hearts to be measured. Therefore, morphological analysis that allows insight into the function of the heart dramatically shifts the trajectory of developmental biology research. Although most papers analyze the thickness of the cardiac muscle to determine the strength of the heart, direct measurement of muscle compaction could provide further insight into the physiology of the developing mammalian heart25,26,27.

The authors have no disclosures to report.