3.1: What are Proteins?
TABLE OF
CONTENTS
X 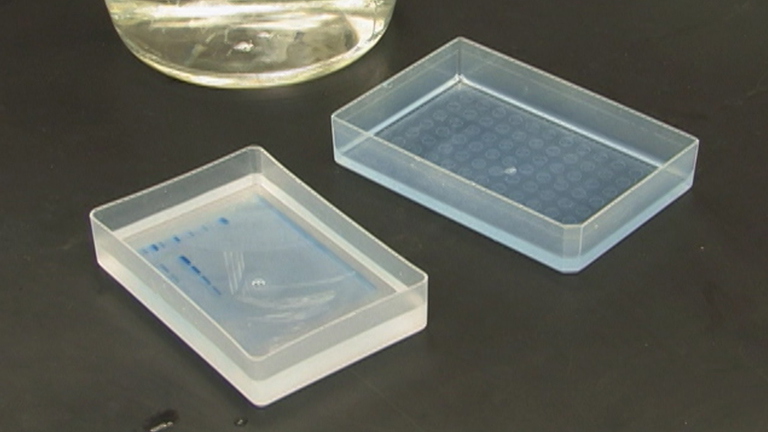 A protein is a chain of amino acids, compounds that contain amine and carboxyl groups, along with different side groups denoted as R, attached to a core carbon. Amino acids are linked through covalent peptide bonds, and the repeating series of atoms along the core is called the polypeptide backbone.

The sequence begins at the N-terminus, with a free amino group, NH3+, and ends with the C-terminus, a free carboxyl group, COO-.

Each protein is unique, depending on the number of amino acids and their side chains. For example, thyroid-releasing hormone has 234 amino acids, whereas the elastic muscle protein connectin has over 34,000.

Moreover, there are 20 different side chains, which fall into one of four groups. Negative polar amino acids, like aspartic and glutamic acids, have side chains with a carboxyl group. Because of this, they act like an acid at neutral pH.

Positive polar amino acids act like bases, and have an amino group in their side chain.

Several amino acids are polar but uncharged. They tend to be hydrophilic, and make up the outer portion of a folded protein, where they are free to interact with the aqueous environment. Lastly, a large group of amino acids contain nonpolar side chains.

They can be simple, as in glycine, or complex, like proline and tryptophan. Nonpolar side chains generally make the amino acid hydrophobic, forming the core of many proteins.

Amino Acid Residues Are the Building Blocks of Proteins

An amino acid is a molecule that contains a carboxyl (–COOH) and an amino group (–NH2) attached to the same carbon atom, the ⍺-carbon. The identity of the amino acid is determined by its side chain or side residue, often called the R-group. The simplest amino acid is glycine, where the residue is a single hydrogen atom. Other amino acids carry more complex side chains. The side chain determines the chemical properties of the amino acid. For example, it may attract or repel water (hydrophilic or hydrophobic), carry a negative charge (acidic), or form hydrogen bonds (polar).

Of all known amino acids, only 21 are used to create proteins in eukaryotes (the genetic code encodes only 20 of these). Amino acids are abbreviated using a three letter (e.g., Gly, Val, Pro) or one letter code (e.g., G, V, P). The linear chain of amino acid residues forms the backbone of the protein. The free amino group at one end is called the N-terminus, while the free carboxyl group on the other end constitutes the C-terminus. The chemical properties of the side chains heavily determine the final structure of the protein as they interact with each other and with polar water molecules.

To form a polypeptide, amino acids are linked together by peptide bonds. Peptide bonds are formed between the amino group (–NH2 group) of one amino acid and the carboxyl group (–COOH) of the adjacent amino acid. Proteins are formed by dehydration synthesis. Each one water molecule is formed during linkage of two amino acids. The resulting covalent bond is a peptide bond.

Amino acids have both a basic and an acidic group. They can, therefore, act as a base (hydrogen ion recipient) or as an acid (hydrogen ion donor). The chemical property depends on the pH of the surrounding medium. At low pH (e.g., pH2) both the carboxyl and amino groups are protonated (–NH3, –COOH), so the amino acid acts as a base. At an alkaline pH (e.g., pH13), both the carboxyl and amino groups are deprotonated (–NH2, –COO-) and the amino acid will act as an acid. At a neutral pH (i.e., most physiological environments, ~pH7.4), the amino group is protonated (–NH3) and the carboxyl group is deprotonated (–COO-), giving rise to a zwitterion, a molecule with both a positive and negative charge. These chemical properties at physiological pH are essential to creating hydrogen bonds, which in turn contribute to the formation of more complex protein structures.

The Length, Structural Complexity, and Functionality Distinguish a Polypeptide from a Protein

Together with carbohydrates, nucleic acids, and lipids, proteins are fundamental building blocks of life. Proteins exhibit enormous diversity in their composition and, hence, function. Among other functions, they provide structure to a cell (e.g., in the form of collagen), allow movement (e.g., actin and myosin in muscles), catalyze reactions (enzymes), bring molecules across the cell membrane, and defend vertebrates against invaders (antibodies).