Determining the chemical formula of a compound is at the heart of what chemists do in the laboratory every day. Many tools are available to aid in this determination, but one of the simplest (and most accurate) is the determination of the empirical formula. Why is this useful? Because of the law of conservation of mass, any reaction can be followed gravimetrically, or by change in mass. The empirical formula provides the smallest whole-number ratio among elements (or compounds) within a molecular compound. In this experiment, gravimetric analysis will be used to determine the empirical formula of copper chloride hydrate, CuxCly·nH2O.

Hydrates are chemical compounds that have water molecules attached (but not covalently bonded) to the compound. Formulas that are hydrated are symbolized by a dot ("·") between the compound and the water molecule. Hydrates easily lose water molecules upon heating, leaving behind the anhydrous (without water) compound. In this case, it would be copper chloride, CuxCly. The difference in mass between the anhydrous and hydrated forms of the salt corresponds to the mass (and moles) of water in the chemical compound CuxCly·nH2O. The anhydrous copper chloride is then dissolved in water, and copper is removed through a redox reaction with aluminum to form solid copper. The difference in mass between the total copper chloride hydrate and the sum of the reduced copper metal and water molecules corresponds to the mass of chloride in the sample. The mass of each component (Cu, Cl, H2O) is converted to moles, whereby the law of multiple proportions allows the use of a ratio to determine the empirical formula of the compound. The true chemical formula of the compound cannot be determined without knowing its molecular mass, but the ratio will always remain the same. 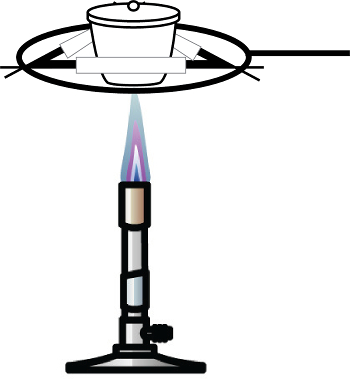 Determining the chemical formula of a compound is a fundamental aspect of a chemist's occupation.

This video will introduce the empirical formula and demonstrate how it can be calculated using a simple experiment in the laboratory.

The molecular formula is related to the empirical formula, and represents the actual number of atoms of each type in a compound. For example, the molecular formula of hydrogen peroxide is H2O2, as each molecule has two hydrogen atoms and two oxygen atoms. A structural formula shows the number of each type of atom, and the bonds between them. Single lines represent a chemical bond. For example, for hydrogen peroxide the structural formula looks like this: H-O-O-H.

Formulas with a dot between the compound and water describe hydrates. Hydrates are chemical compounds that have water molecules attached, but not covalently bonded. Hydrates easily lose their water molecules upon heating and become “anhydrous,” or “without water.” Hydrates and anhydrous compounds have unique physical properties, as the molecules organize differently.

To begin the procedure, dry the crucible above 120 °C to drive off any adsorbed moisture, and accurately determine its weight.

Weigh a sample of a copper chloride hydrate, and place it into the crucible.

Next, heat the sample in the crucible using a heat source, such as a Bunsen burner. Place the cover on the crucible to help prevent splattering, but keep it open slightly to allow water vapor to escape.

Heat the sample until it has changed from a blue-green color to a red-brown color. This color change is indicative of the anhydrous form of copper chloride. Stir to make sure that the water has been driven off the sample, and the color is consistent throughout.

Next, cool the sample in a desiccator, to prevent rehydration.

Accurately measure the mass of the anhydrous sample. The difference corresponds to the waters of hydration that were lost upon heating.

Transfer the dried sample into a 250 mL beaker, and dissolve it in 150 mL deionized water. The solution should turn blue again, as the copper chloride is rehydrated.

Add a small piece of aluminum wire to the beaker. The blue copper two plus will reduce to a reddish copper zero on the surface of the wire, while the aluminum will oxidize to colorless aluminum three plus. The blue color of the solution will disappear during the reaction.

After about 30 min, use additional aluminum to ensure that all of the copper has reduced to a solid copper metal.

Next, add about 10 mL of 6 M hydrochloric acid to dissolve the aluminum wire.

Using a Büchner funnel and pre-weighed filter paper, vacuum filter the colorless solution. Rinse the sample with absolute, or pure, ethanol. Allow the sample to air-dry.

Finally, measure the mass of the copper solid.

The determination and knowledge of the empirical formula of a compound is important in many areas of chemistry and research.

Forensic chemistry is the application of chemistry in a legal setting. For example, unknown compounds, such as drugs and poisons, are often found at crime scenes. Forensic chemists use a wide range of methods to identify the unknown substance.

In one example, suppose an unknown biomolecule containing only C, H, and O is found to act well as a new fuel. One way to determine the formula of the fuel would be to combust it in air and analyze the products:

While O2 is in excess, we would know all the carbon in CO2 originated from the biomolecule and all the hydrogen would be present in H2O. The difference between that total mass and the mass of initial sample would be the mass of oxygen in the molecule. We could then convert to moles and determine the empirical formula.

In another example, a hydrate sample of MgxCly·nH2O is given. The mass of the water molecules would again be easily determined by heating. Using some solubility rules, chloride is then precipitated with silver ion, Ag+, to form AgCl(s). Once the mass of AgCl(s) is found, the moles of Cl- are determined using the molar mass of AgCl(s) and then converted to grams of Cl-. This would allow us to determine the mass of Mg in the sample followed by the empirical formula. 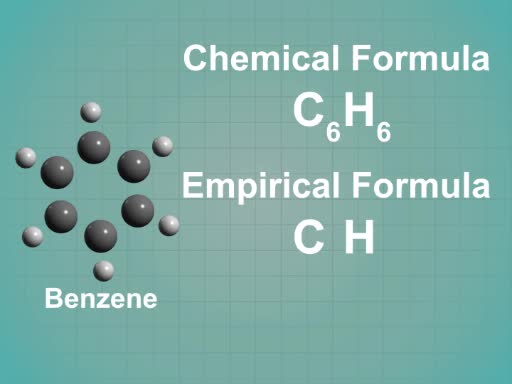