In this video we perform electroretinogram recording, optic nerve recording, and intraretinal recording with the American horseshoe crab, Limulus Polyphemus. These electrophysiological paradigms can be used for investigating the neural basis of vision in a research or teaching lab.

The American horseshoe crab, Limulus Polyphemus is one of the oldest creatures on earth, and the animal continues to play an indispensable role in biomedical research. Not only does their blood contain special cells that scientists use to detect bacteriotoxins in our medicines, but their eyes also contain a neural network that has provided much insight about physiological processes operating in our visual system, such as light adaptation and lateral inhibition. The horseshoe crab remains an attractive model for vision research because the animal is large and hardy for an invertebrate, its retinal neurons are big and easily accessible, its visual system is compact and extensively studied, and its visual behavior is well defined. Moreover, the structure and function of the eyes are modulated on a daily basis by a circadian clock in the animal s brain. In short, the visual system of horseshoe crabs is simple enough to be understood yet complex enough to be interesting.

In this video we present three electrophysiological paradigms for investigating the neural basis of vision that can be performed in vivo with Limulus. They are electroretinogram recording, optic nerve recording, and intraretinal recording. Electroretinogram (ERG) recordings measure with a surface electrode the summed electrical response of all cells in the eye to a flash of light. They can be used to monitor the overall sensitivity of the eye for prolong periods of time. Optic nerve recordings measure the spiking activity of single nerve fibers with an extracellular microsuction electrode. They can be used to study visual messages conveyed from the eye to the brain as well as circadian-clock messages fed back from the brain to the eye. Intraretinal recordings measure with an intracellular microelectrode the voltage fluctuations induced by light in individual cells of the eye. They can be used to elucidate cellular mechanisms of retinal processing.

Experimental procedures performed on horseshoe crabs have been approved by the Institutional Animal Care and Use Committee at Boston University. Animals are purchased from the Marine Biological Labs (Woods Hole, MA) or other vendor and housed in an aerated saltwater tank in a room exposed to a regulated light-dark cycle. The lighting regimen is important for entraining the crab's circadian clock and cycling the eye daily between its daytime and nighttime states. Immediately before starting any invasive procedures, the animal is chilled in an ice bucket for 10-15 minutes until its motion is slowed and then secured to a wooden platform with two stainless steel screws inserted in the prosoma and two in the opisthosoma. The platform is weighted underneath with granite so that it sinks in water. After terminal experiments the animal is euthanized by immersing into ice slurry again and pithing the brain, which lies above the mouth, with a scalpel.

Tools needed for this procedure include a screwdriver, petroleum jelly, Ringer's solution, a transfer pipette, a green LED, a recording chamber, stainless steel screws, and a cotton swab.

Tools needed for this procedure include a screwdriver, a L-shaped lucite platform with threaded screw holes, a microelectrode holder with a glass pipette, stainless steel screws, tweezers, and a fine scalpel.

A representative ERG is shown in Figure 2A. The waveform represents the summed electrical response to light of primarily the photoreceptive retinular cells, as they greatly outnumber the eccentric cells and are electrically coupled to them. There are not multiple waveform components from different retinal cell types as with the mammalian ERG. Circadian feedback from a clock in the Limulus brain modulates the physiological properties of retinal cells on a daily basis, causing the amplitude and time course of the ERG to vary over time (1). As shown in Figure 2B, ERG amplitude is highest during the animal's subjective night and lowest during the subjective day.

A representative trace of a single optic nerve fiber response to light is shown in Figure 3. Eccentric cells all behave roughly the same, showing a transient increase in spike discharge rate followed by a decay to a sustained level. The rate decay reflects the combined action of light adaptation and spike-dependent self-inhibition on eccentric cells (2). Other spike patterns, such as light-dependent decreases in rate, are seen in the Limulus brain but not the eye (3).

Representative traces of the voltage response of a pigment cell, retinular cell, and eccentric cell to light are shown in Figure 4. Only the latter two retinal cell types are visual. The amplitude and time course of their response depends on the quality of the recording and the location of the electrode within the cell. Usually, the electrode penetrates pigment cells or retinular cells because of their large size and number. If the latter, a transient depolarization that decays to a sustained level is recorded. The decay is due to light adaptation by retinular cells (2). If the electrode enters an eccentric cell, large action potentials are recorded in the axon (40-70mV) and small action potentials riding on a depolarizing waveform (<25mV) near the soma. 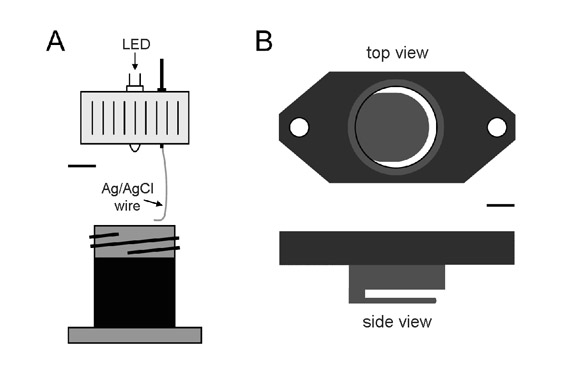 Figure 1. Schematic diagrams of chambers used for electroretinogram recording (A) and optic nerve recording (B). Bar equals 7mm in A and 5mm in B. 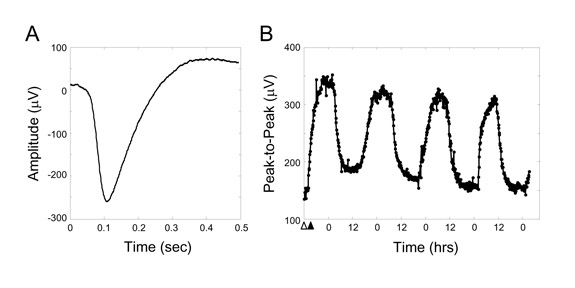 Figure 2. Example trace of a Limulus ERG evoked by a 100ms LED pulse of 5V in the dark (A) and the peak-to-peak fluctuation in ERG amplitude over time in constant darkness (B). Darkness was initiated at the time indicated by the white triangle. The growth in ERG amplitude through the time indicated by the black triangle is due to light adaptation, which increases eye sensitivity in the dark. The cyclic variation in ERG amplitude thereafter is due to the animal's internal circadian clock. Time points in B are every 5min. 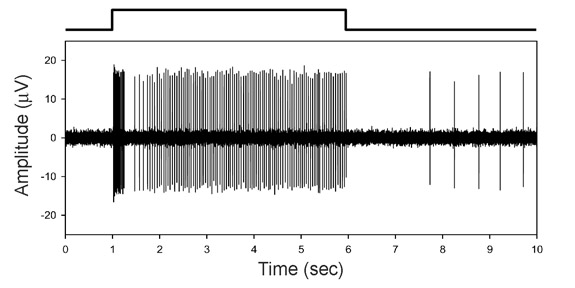 Figure 3. Example trace of an optic nerve fiber response to light flashed on a single ommatidial receptor. Waveform above the trace shows stimulus timing. Eccentric cells, whose axons give rise to nerve fibers, all show a similar pattern of firing as this under the illumination conditions of the experiment (5sec flash in total darkness). Retinal coding with spikes is a property Limulus has in common with mammals, unlike other invertebrates.

Figure 4. Example traces of the voltage response to light of the three cell types present in the Limulus lateral eye: pigment cell (A), retinular cell (B), and eccentric cell (C). The first cell is non-visual. The latter two depolarize upon a light flash. The depolarization is largest for retinular cells because they transduce the light and send the signal through gap junctions to the eccentric cell, with some loss along the way. In the eccentric cell, action potentials fired by the axon are seen riding on the depolarization due to spike backpropagation into the soma. The amplitude of action potentials has been attenuated in the figure for better viewing of the depolarizing potential. The resting potential of the cells is -50mV.

We have illustrated how to perform ERG recordings, optic nerve recordings, and intraretinal recordings on horseshoe crabs in vivo. The recording techniques each provide different insights into the neural basis of vision, and they can all be used to study retinal function in live animals thanks to the crab's large eyes and hard carapace. Optic nerve activity can even be recorded from freely behaving animals in the ocean with proper construction of electrodes (4). These techniques can also be performed on excised eyes with minor modification of the setup. The relevance of such experiments to the natural condition would be limited, as the physiological properties of the crab's eye change when removed from the animal (5), but the instructional value would be great for a teaching lab given the widespread use of these methods in neuroscience.

ERG recording, optic nerve recording, and intraretinal recording were presented separately here for sake of clarity. In practice, multiple recording methods are often combined within a single experiment to simultaneously monitor changes in neural activity and visual sensitivity in one or both lateral eyes. The small chamber we use for ERG recording is particularly advantageous in this regard over other designs (1, 6). Moreover, it holds a reservoir of saline solution that is sealed from air, eliminating the stability problems associated with conventional wick electrodes that can dry out over time. The suite of possible vision experiments with Limulus is even greater than this because the same procedures described for nerve recording can be used for nerve stimulation by connecting the electrode leads to an electrical stimulator instead of a signal amplifier.

The authors would like to acknowledge Dr. Birgit Werner for her help with producing this video article. This research was funded by an NSF CAREER Award. 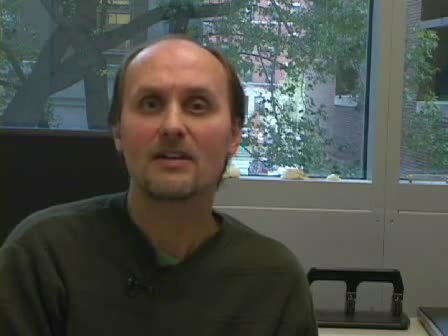