A cell death-based assay for PTI in Nicotiana benthamiana plants is described.

To perceive potential pathogens in their environment, plants use pattern recognition receptors (PRRs) present on their plasma membranes. PRRs recognize conserved microbial features called pathogen-associated molecular patterns (PAMPs) and this detection leads to PAMP-triggered immunity (PTI), which effectively prevents colonization of plant tissues by non-pathogens1,2. The most well studied system in PTI is the FLS2-dependent pathway3. FLS2 recognizes the PAMP flg22 that is a component of bacterial flagellin.

Successful pathogens possess virulence factors or effectors that can suppress PTI and allow the pathogen to cause disease1. Some plants in turn possess resistance genes that detect effectors or their activity, which leads to effector-triggered immunity (ETI)2.

We describe a cell death-based assay for PTI modified from Oh and Collmer4. The assay was standardized in N. benthamiana, which is being used increasingly as a model system for the study of plant-pathogen interactions5. PTI is induced by infiltration of a non-pathogenic bacterial strain into leaves. Seven hours later, a bacterial strain that either causes disease or which activates ETI is infiltrated into an area overlapping the original infiltration zone. PTI induced by the first infiltration is able to delay or prevent the appearance of cell death due to the second challenge infiltration. Conversely, the appearance of cell death in the overlapping area of inoculation indicates a breakdown of PTI.

Four different combinations of inducers of PTI and challenge inoculations were standardized (Table 1). The assay was tested on non-silenced N. benthamiana plants that served as the control and plants silenced for FLS2 that were predicted to be compromised in their ability to develop PTI.

Part 3: Preparing plants for the assay

Marking circles a day prior to the experiment is not essential to the protocol. However, it saves time if there are large numbers of plants being assayed, and makes it easier to achieve precise timing between the induction of PTI and challenge inoculations.

Part 6: Scoring for breakdown of PTI

When the control plants (that should not be compromised for PTI) begin to show cell death in the overlapping area of infiltration, stop making any further observations.

Figure 1 shows the outcome of an assay when P. fluorescens was used as the inducer and P.s.t. DC3000 as the challenge. 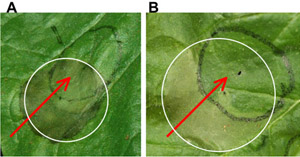 Figure 1. P. fluorescens was infiltrated onto N. benthamiana leaves (black circle) to induce PTI and 7 hours later, the spot was challenged with P.s.t DC3000 (white circle). Plants silenced for FLS2 showed a breakdown of PTI in the region where P. fluorescens was infiltrated (A), as seen by cell death. Control plants that were not silenced showed no cell death in the overlapping area due to induction of PTI (B). Red arrows indicate lack of or presence of cell death in the overlapping area of infiltration. Photographs were taken 2 days after the infiltrations. Please click here to see a larger version of figure 1.

Table 2:Culture conditions and inoculum levels used in the assay. The O.D. and corresponding C.F.U. levels may vary between different brand of spectrophotometers.

The cell death-based assay can be used to determine the involvement of a gene in PTI. For instance, loss-of-function mutants for a gene of interest can be tested using this assay. Out of the 4 combinations of inducer and challenge inoculations given in Table 1, it is possible that only one combination may result in a phenotype in your plant background. We have observed that plants silenced for FLS2 show a breakdown of PTI in the Pf/DC and Pf/Q1-1 combinations of inducer and challenge inoculations (Table 1).

It is essential that the environmental conditions for the assay are as close as possible to those described in Part 3.1. Low humidity causes cell death to proceed too quickly, making the assay difficult to score. If the conditions described in our protocol do not work in your lab, then try altering the level of inducer or challenge inoculation. Another parameter that can be modified is the time gap between induction and challenge, although we have found that shorter time gaps caused the assay to break down too quickly in control plants.

We recommend that at least 4-5 plants be tested in an experiment and a positive phenotype should be repeated in at least 3-4 independent experiments. 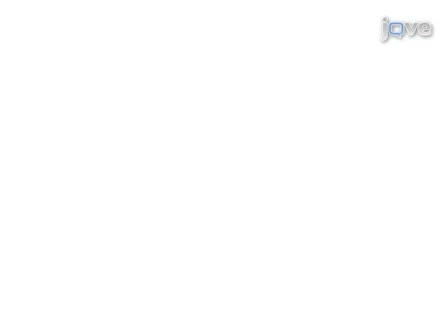