Diffuse noxious inhibitory control, temporal summation and wound hyperalgesia testing are demonstrated in the obstetric patient. These tests evaluate inhibitory and excitatory mechanisms of pain processing and are here utilized to evaluate endogenous analgesia at different time-points during pregnancy and the peripartum period to help reveal individual s risk for persistent pain.

Many women undergo cesarean delivery without problems, however some experience significant pain after cesarean section. Pain is associated with negative short-term and long-term effects on the mother. Prior to women undergoing surgery, can we predict who is at risk for developing significant postoperative pain and potentially prevent or minimize its negative consequences? These are the fundamental questions that a team from the University of Washington, Stanford University, the Catholic University in Brussels, Belgium, Santa Joana Women's Hospital in São Paulo, Brazil, and Rambam Medical Center in Israel is currently evaluating in an international research collaboration. The ultimate goal of this project is to provide optimal pain relief during and after cesarean section by offering individualized anesthetic care to women who appear to be more 'susceptible' to pain after surgery.

A significant number of women experience moderate or severe acute post-partum pain after vaginal and cesarean deliveries. 1 Furthermore, 10-15% of women suffer chronic persistent pain after cesarean section. 2 With constant increase in cesarean rates in the US 3 and the already high rate in Brazil, this is bound to create a significant public health problem. When questioning women's fears and expectations from cesarean section, pain during and after it is their greatest concern. 4 Individual variability in severity of pain after vaginal or operative delivery is influenced by multiple factors including sensitivity to pain, psychological factors, age, and genetics. The unique birth experience leads to unpredictable requirements for analgesics, from 'none at all' to 'very high' doses of pain medication. Pain after cesarean section is an excellent model to study post-operative pain because it is performed on otherwise young and healthy women. Therefore, it is recommended to attenuate the pain during the acute phase because this may lead to chronic pain disorders. The impact of developing persistent pain is immense, since it may impair not only the ability of women to care for their child in the immediate postpartum period, but also their own well being for a long period of time.

In a series of projects, an international research network is currently investigating the effect of pregnancy on pain modulation and ways to predict who will suffer acute severe pain and potentially chronic pain, by using simple pain tests and questionnaires in combination with genetic analysis. A relatively recent approach to investigate pain modulation is via the psychophysical measure of Diffuse Noxious Inhibitory Control (DNIC). This pain-modulating process is the neurophysiological basis for the well-known phenomenon of 'pain inhibits pain' from remote areas of the body. The DNIC paradigm has evolved recently into a clinical tool and simple test and has been shown to be a predictor of post-operative pain.5 Since pregnancy is associated with decreased pain sensitivity and/or enhanced processes of pain modulation, using tests that investigate pain modulation should provide a better understanding of the pathways involved with pregnancy-induced analgesia and may help predict pain outcomes during labor and delivery. For those women delivering by cesarean section, a DNIC test performed prior to surgery along with psychosocial questionnaires and genetic tests should enable one to identify women prone to suffer severe post-cesarean pain and persistent pain. These clinical tests should allow anesthesiologists to offer not only personalized medicine to women with the promise to improve well-being and satisfaction, but also a reduction in the overall cost of perioperative and long term care due to pain and suffering. On a larger scale, these tests that explore pain modulation may become bedside screening tests to predict the development of pain disorders following surgery.

Part 4: Calculation of DNIC and mTS

Mode of delivery, analgesia for labor and delivery or standardized spinal anesthesia for cesarean section and obstetrical and neonatal demographics are recorded.

The time points and doses of any opioids, acetaminophen, and non-steroidal anti-inflammatory drugs consumed 0 to 48 hours postpartum for post-operative pain are documented. Information regarding the duration of the epidural effect is recorded.

Lastly, a researcher calls subjects 2, 6 and 12 months after her cesarean section to administer the Short-form McGill Pain Questionnaire 2 and a customized questionnaire, which assesses post-operative pain experiences. This telephone interview usually takes no longer than 5 minutes.

To date, we performed mTS and DNIC pre-operatively in 75 women (n=38 in Brazil and n=37 in UWMC Seattle). Figure 1 shows graphic representation of pre-cesarean DNIC score. 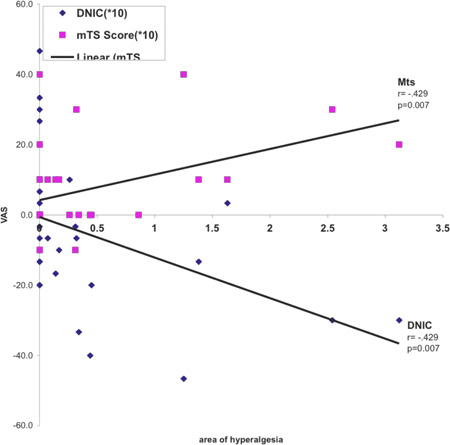 Preliminary data reveals that mTS and DNIC may be correlated with greater post-cesarean hyperalgesia. If pre-operative mTS, DNIC, genetic testing and psychosocial questionnaires can predict individual susceptibility to develop severe post-operative pain and persistent pain, patients may be stratified to different risk groups. In return, different treatments including preemptive multimodal analgesia may have different outcomes in each subset of patients. 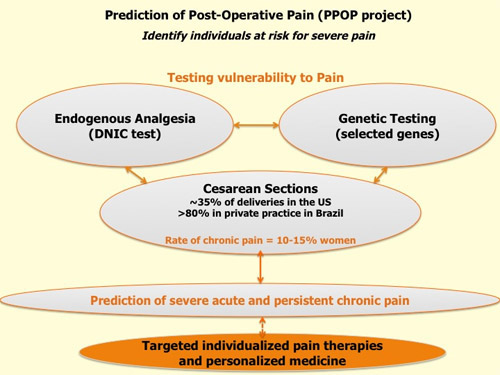 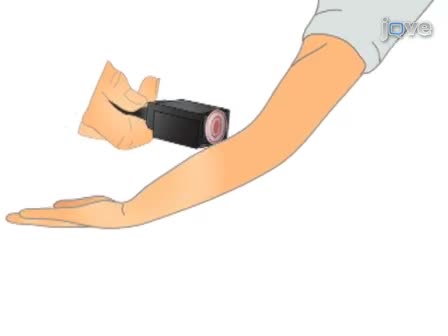