We established a novel murine model of a hanging weight system for portal triad occlusion. This technique may be useful for future investigations of ischemia in murine hepatic models.

Acute liver injury due to ischemia can occur during several clinical procedures e.g. liver transplantation, hepatic tumor resection or trauma repair and can result in liver failure which has a high mortality rate1-2. Therefore murine studies of hepatic ischemia have become an important field of research by providing the opportunity to utilize pharmacological and genetic studies3-9. Specifically, conditional mice with tissue specific deletion of a gene (cre, flox system) provide insights into the role of proteins in particular tissues10-13 . Because of the technical difficulty associated with manually clamping the portal triad in mice, we performed a systematic evaluation using a hanging-weight system for portal triad occlusion which has been previously described3. By using a hanging-weight system we place a suture around the left branch of the portal triad without causing any damage to the hepatic lobes, since also the finest clamps available can cause hepatic tissue damage because of the close location of liver tissue to the vessels. Furthermore, the right branch of the hepatic triad is still perfused thus no intestinal congestion occurs with this technique as blood flow to the right hepatic lobes is preserved. Furthermore, the portal triad is only manipulated once throughout the entire surgical procedure. As a result, procedures like pre-conditioning, with short times of ischemia and reperfusion, can be easily performed. Systematic evaluation of this model by performing different ischemia and reperfusion times revealed a close correlation of hepatic ischemia time with liver damage as measured by alanine (ALT) and aspartate (AST) aminotransferase serum levels3,9. Taken together, these studies confirm highly reproducible liver injury when using the hanging-weight system for hepatic ischemia and intermittent reperfusion. Thus, this technique might be useful for other investigators interested in liver ischemia studies in mice. Therefore the video clip provides a detailed step-by-step description of this technique.

General remarks. All operations should be performed under an upright dissecting microscope (Leica) and by using a surgical coagulator. The mice in the experimental and sham groups should be matched in age and weight to ensure comparability of the results. Temperature, blood pressure, anesthesia and fluid administration should be stable and monitored during the entire experiment. 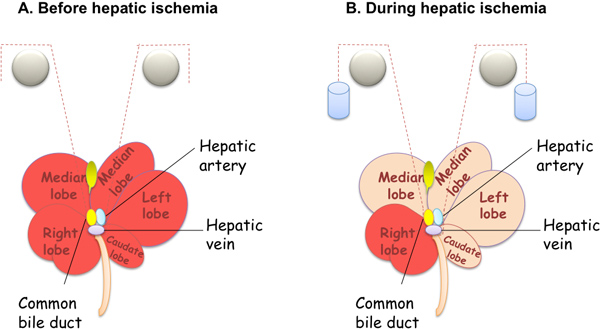 Figure 1. Model of a hanging-weight system for liver ischemia: A hanging weight system has been established to induce liver ischemia of the left and median lobe3. (A) Therefore the caudate and right lobe were gently separated from the left lobe. The right lobe was then slightly shifted to clearly view the portal triad above the bifurcation of right, median and left lobes. An 8.0 nylon suture was placed under the left hepatic triad. (B) At the end of each suture a small weight (3 g Eppendorf tubes filled with water) was attached and applied. Hepatic ischemia is visible by a color change of the left and median lobe from red to pale. This experimental design allows precise occlusion and reperfusion of the left hepatic triad by applying and releasing the weight load. 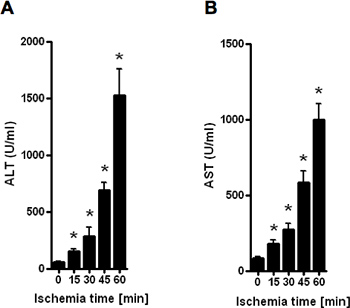 Figure 2. Effect of different liver ischemia times on alanine (ALT) and aspartate (AST) aminotransferase in mice. Partial portal triad ischemia was induced as indicated (0 - 60 min ischemia). After 2 hr of reperfusion, ALT (A) and AST (B) were measured. Results are expressed as means ± SE of 6 - 7 mice/group. *P < 0.05 compared with 0 min ischemia (sham control).

The present study describes a technique of performing ischemia in a murine model by using a hanging-weight system for occlusion of the left hepatic portal triad. Although it is an easy method to learn the following pitfalls should be taken into account. A very common mistake in the beginning is a deep stitch which includes the portal triad and the vena cava. The breathing and heart rate will slow down within 15 minutes due to the increased resistance and the decrease in returning blood to the heart resulting in an early death of the mice. The best way to prevent the including of the vena cava is to localize the vena cava before the stitch by holding the right lobes down with a forceps. Another important issue is that the weights are not to heavy which can result in too much stress on the left and right portal trial which also stops blood flow to the right lobes. Therefore the amount of water in the Eppendorf vials should be adjusted to the mouse weight and the suture holders should be placed distally from the stitch location. On the opposite if the weights are to low blood pressure is not completely stopped. Both mistakes are easily detectable by an additional color change to pale of the right lobe or insufficient color change of the median and left lobes, respectively. Therefore the hepatic color change following applying the weights should be controlled every 10 minutes. Another common surgical complication is the injuring of the liver with the needle. Therefore the right lobes should be held down with a bland forceps so that the tip of the needle can be easily seen and taken with a needle holder. If these pitfalls in the beginning are taken into account the hanging-weight system for hepatic ischemia provides a highly reproducible injury due to ischemia by minimizing the variability of liver damage associated with clamping of the portal triad. By using a hanging-weight system, the portal triad is only manipulated once throughout the entire surgical procedure, causing significantly less damage to the hepatic lobes. In addition, no hepatic or intestinal congestion occurs with this technique. More tissue trauma occurs by removing and replacing vessel clamps, especially with reapplication of the clamp during multiple ischemia cycles like during ischemic preconditioning. The use of hanging weights that are in a remote location from the liver tissue, according to our observations, provides the advantage of reliable occlusion while preventing tissue trauma due to manipulation of the liver lobes by reapplication of a clamp. Taken together, the present study provides feasibility of the hanging-weight system for portal triad occlusion during ischemia, minimizing the variability and limitations associated with clamping. Thus this technique might be of interest for other investigators who consider studying hepatic ischemia.

The present studies were supported by United States National Institutes of Health grant R01-HL092188, R01-DK083385 and R01HL098294, and Foundation for Anesthesia Education and Research (FAER) Grants to HKE and a DFG (Deutsche Forschungsgemeinschaft) Research Fellowship (GR2121/1-1) and American Heart Association Grant to AG. 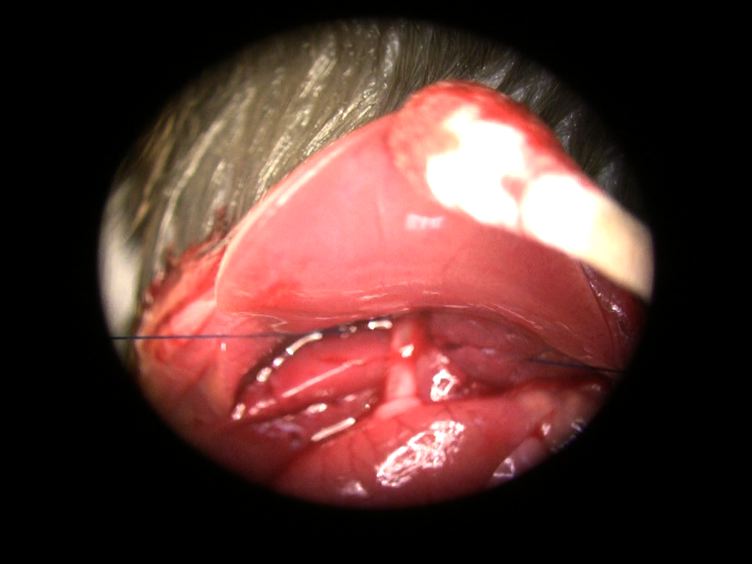