Whole-mount immunohistochemical analysis for imaging the entire vasculature is pivotal for understanding the cellular mechanisms of branching morphogenesis. We have developed the limb skin vasculature model to study vascular development in which a pre-existing primitive capillary plexus is reorganized into a hierarchically branched vascular network. Whole-mount confocal microscopy with multiple labelling allows for robust imaging of intact blood vessels as well as their cellular components including endothelial cells, pericytes and smooth muscle cells, using specific fluorescent markers. Advances in this limb skin vasculature model with genetic studies have improved understanding molecular mechanisms of vascular development and patterning. The limb skin vasculature model has been used to study how peripheral nerves provide a spatial template for the differentiation and patterning of arteries. This video article describes a simple and robust protocol to stain intact blood vessels with vascular specific antibodies and fluorescent secondary antibodies, which is applicable for vascularized embryonic organs where we are able to follow the process of vascular development.

3. Mounting the Limb Skins on Slide 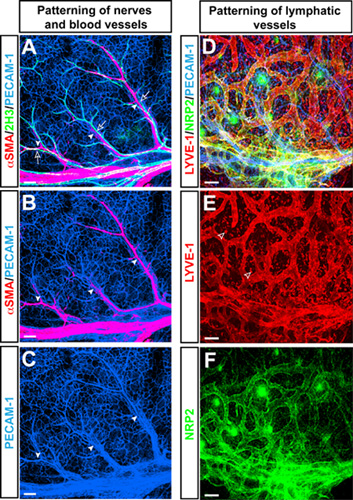 The vascular system is crucial for organ development during embryogenesis as well as for organ maintenance and reproductive functions in the adults, because it supplies sufficient oxygen and nutrients to the organs. Proper vascular network is well-established with complex and multi-step processes by angiogenesis in which pre-existing capillary network is reorganized with highly branched and hierarchical structures. Although numerous works have been shown that a variety of molecules is involved in these processes, it has not been clear how organs or their components provide the signals to promote the stepwise process of vascular development including endothelial differentiation and patterning of vascular branching. To address this question, appropriate vascularized organs where we are able to follow the process of vascular development are required. The limb skin vasculature model with gain-of-function and loss-of-function genetic manipulations enables high-resolution analysis of vascular development.

We describe here a detailed protocol including dissection of embryonic mouse forelimbs, whole-mount immunohistochemical staining and confocal microscopy that is routinely used in our laboratory to analyze limb skin angiogenesis and lymphangiogenesis. The protocol provides reproducible results and intact vasculature for early as well as late embryonic limb skin is easily imaged by confocal microscopy. It is also applicable for adult ear skin vasculature (Y.M. and K. Perkins, unpublished). To further explore the imaging of the dynamics of blood vessel growth and remodeling, however, other animal model like zebrafish with fluorescently labelled blood vessels is useful for time-lapse imaging of the vasculature in vivo with high-resolution.

Whole-mount confocal microscopy with multiple labelling by vascular markers permitted us to image blood and lymphatic endothelial cells, and their neighbours including smooth muscle cells and pericytes in the skins. In addition to the vascular marker antibodies (Table 2), antibodies for reporter gene products (β-galactosidase, β-gal and green fluorescent protein, GFP, Table 2) that recapitulate the expression pattern of endogenous genes of your interest can be used. For example, we used forelimb skin from embryos carrying lacZ reporter targeted to the ephrinB2 (Wang et al., 1998) or EphB4 locus (Gerety et al., 1999), which provides a histochemical indicator of ephrinB2 or EphB4. EphrinB2, a transmembrane ligand, is expressed by arteries but not veins, whereas its receptor, the tyrosine kinase EphB4 is preferentially expressed by veins (Wang et al., 1998). Whole-mount immunohistochemical analysis in forelimb skins of E15.5 ephrinB2lacZ/+ or EphB4lacZ/+ heterozygous embryos revealed that peripheral sensory nerves associated preferentially with arterial vessels (Mukouyama et al. 2002). These mice are available in the Jackson Laboratory (Efnb2tm1And/J: stock#006039, Ephb4tm1And/J: stock#006044).

The study of different stages of these vascular systems reveals the cellular dynamics of angiogenesis including vascular branching, arterial/venous differentiation, lymphatic vessel development and smooth muscle/pericyte coverage in the developing limb skin. By E13.5, primitive capillary plexus was established in the limb skin but no association between sensory nerves and blood vessels was observed. By E14.5, vascular remodelling occurred and nerve associated with remodelled branched vessels, which express arterial endothelial cell markers and have αSMA+ smooth muscle cells (Mukouyama et al. 2002). Genetic studies suggest that peripheral sensory nerves provide a template for determining the blood vessel branching patterns and arterial differentiation (Mukouyama et al. 2002). The analysis of nerve-Vegf-A conditional mutants revealed that nerve-derived VEGF-A is required for arterial differentiation in the limb skin vasculature (Mukouyama et al. 2005). Our results also showed that the nerve-Vegf-A conditional mutants exhibit less impairment of nerve-vessel alignment, indicating the involvement of additional angiogenic factor(s). This suggests that the limb skin vasculature model allows us to study different mechanisms that control arterial differentiation and patterning of vascular branching. Moreover, what controls venous differentiation and patterning of venous and lymphatic vessel branching still remains to be answered.

We thank K. Gill for assistance with mouse breeding and care and for laboratory management. Thanks also to Mukoyama lab members for technical help. Funding was provided by Intramural Research Program of Naitonal Institutes of Health. 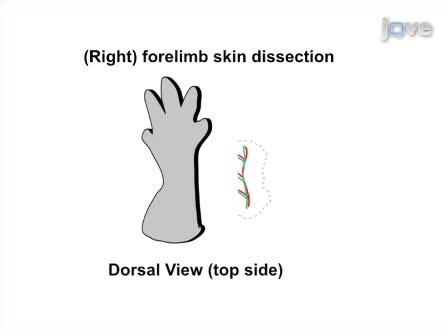