The subcellular localization of proteins is important in determining the spatio-temporal regulation of cell signaling. Here, we describe bimolecular fluorescence complementation (BiFC) as a straightforward method for monitoring the spatial interactions of proteins in the cell.

Defining the subcellular distribution of signaling complexes is imperative to understanding the output from that complex. Conventional methods such as immunoprecipitation do not provide information on the spatial localization of complexes. In contrast, BiFC monitors the interaction and subcellular compartmentalization of protein complexes. In this method, a fluororescent protein is split into amino- and carboxy-terminal non-fluorescent fragments which are then fused to two proteins of interest. Interaction of the proteins results in reconstitution of the fluorophore (Figure 1)1,2. A limitation of BiFC is that once the fragmented fluorophore is reconstituted the complex is irreversible3. This limitation is advantageous in detecting transient or weak interactions, but precludes a kinetic analysis of complex dynamics. An additional caveat is that the reconstituted flourophore requires 30min to mature and fluoresce, again precluding the observation of real time interactions4. BiFC is a specific example of the protein fragment complementation assay (PCA) which employs reporter proteins such as green fluorescent protein variants (BiFC), dihydrofolate reductase, b-lactamase, and luciferase to measure protein:protein interactions5,6. Alternative methods to study protein:protein interactions in cells include fluorescence co-localization and Förster resonance energy transfer (FRET)7. For co-localization, two proteins are individually tagged either directly with a fluorophore or by indirect immunofluorescence. However, this approach leads to high background of non-interacting proteins making it difficult to interpret co-localization data. In addition, due to the limits of resolution of confocal microscopy, two proteins may appear co-localized without necessarily interacting. With BiFC, fluorescence is only observed when the two proteins of interest interact. FRET is another excellent method for studying protein:protein interactions, but can be technically challenging. FRET experiments require the donor and acceptor to be of similar brightness and stoichiometry in the cell. In addition, one must account for bleed through of the donor into the acceptor channel and vice versa. Unlike FRET, BiFC has little background fluorescence, little post processing of image data, does not require high overexpression, and can detect weak or transient interactions. Bioluminescence resonance energy transfer (BRET) is a method similar to FRET except the donor is an enzyme (e.g. luciferase) that catalyzes a substrate to become bioluminescent thereby exciting an acceptor. BRET lacks the technical problems of bleed through and high background fluorescence but lacks the ability to provide spatial information due to the lack of substrate localization to specific compartments8. Overall, BiFC is an excellent method for visualizing subcellular localization of protein complexes to gain insight into compartmentalized signaling.

B. Plating and Transfection of Cells

C. Preparation of Cells for Imaging

Our lab focuses on the multi-domain scaffolding protein, intersectin (ITSN) which interacts with numerous proteins to regulate multiple biochemical and signaling pathways10,11,12,13,14. ITSN contains two Eps15 homology (EH) domains, a coiled-coiled region, and five Src homology 3 (SH3) domains. The longer isoform of ITSN also contains Dbl homology (DH) and pleckstrin homology (PH) domains that act in concert as a guanine nucleotide exchange factor for Cdc4215. This modular structure promotes protein:protein interactions and makes ITSN an ideal candidate for BiFC experiments. The subcellular localization of ITSN can alter its binding partners and therefore alter the pathways regulated by ITSN (unpublished data). Recently, our lab has demonstrated that ITSN regulates neuronal survival through regulation of a novel class II PI3K, PI3K-C2β 11. The amino-terminal Pro-rich domain of PI3K-C2β contains two binding sites for ITSN's SH3 domains. Using co-immunoprecipitation with ITSN and PI3K-C2β truncation mutants we demonstrated that ITSN's SH3A and SH3C domains interact with the amino-terminal region of PI3K-C2β. Next, we used BiFC to visualize the subcellular localization of this complex. ITSN was fused to the amino-terminus of Venus (pFLAG-VN173) and PI3K-C2β constructs fused to the carboxy-terminus of Venus (pHA-VC155). As another negative control, a non-specific peptide was fused to pHA-VC155. VN-ITSN and VC-PI3K-C2β formed a BiFC complex with a punctuate distribution (Figure 2A, upper panels). Mutations in the Pro-rich domain of PI3K-C2β that disrupt co-precipitation of ITSN and PI3K-C2β decreased the BiFC signal (Figure 2A, lower panels)11. This difference in BiFC signal between ITSN and the two PI3K-C2β proteins was not due to differences in protein expression (Figure 2B).

Figure 1. In BiFC, a fluorophore (in this case Venus) is split into amino(VN)- and carboxy(VC)-terminal ends. These ends are fused to two proteins of interest. When the two proteins interact, the VN and VC fragments re-associate resulting in reconstitution of the fluorophore and fluorescence at the sites of interaction. BiFC is a specific example of the protein fragment complementation assay (PCA) used to measure protein:protein interactions5. 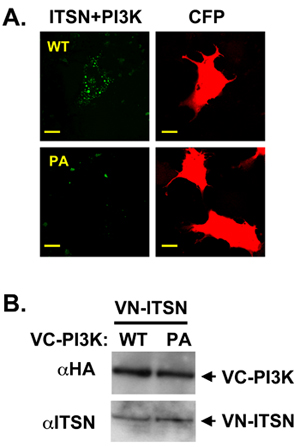 Figure 2. ITSN and PI3K-C2β form a BiFC complex. A. VN-tagged ITSN was co-tranfected with VC-tagged PI3K-C3β WT or a proline-rich domain mutant (PI3K-C2β-PA). ITSN and WT PI3K-C2β form a complex (green). CFP (red) was used as a transfection control B. A Western blot was performed to demonstrate equal expression of the constructs. The VC-tagged constructs are HA tagged. 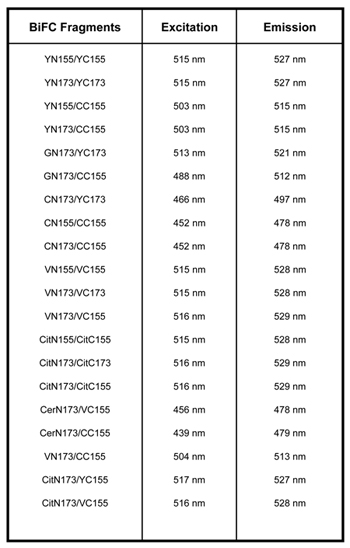 BiFC is an excellent method for visualizing protein:protein interactions in whole cells and determining the subcellular localization of these complexes. The advantages of BiFC are that only interacting proteins are fluorescent, transient interactions are stabilized, and post-processing of the imaging data is minimal. Two disadvantages of this method are the maturation time for the fluorophore and the irreversibility of fluorophore complex. Under some applications this irreversibility can be used as an advantage. For example, one may use an enzyme and an activator of that enzyme in BiFC complex, resulting in constitutive activation. One could then determine what proteins are recruited to this complex. Furthermore, the irreversibility of the BiFC complex allows for the identification of weak or transient interactions. Proper controls are important for interpretation of BiFC experiments. Empty BiFC vectors should not be used as controls as these reagents result in high background fluorescence. Proper controls include using a mutation in one of the proteins of interest that is known to block the interaction of the two proteins. An unrelated protein that should not complex with the protein of interest may also be used. It is also important that Western blot analysis is performed to ensure that expression of the different constructs is equal and that differences in fluorescent signal are not due to varying levels of protein expression. High expression can also lead to non-specific interactions and fluorescence; therefore expression levels should be kept relatively low.

BiFC is a practical method that is readily combined with other fluorescent techniques. For example, BiFC may be combined with standard immunofluorescent co-localization to examine trimolecular complexes although this approach is still subject to the resolution limits of the confocal microscope. Recent studies have combined BiFC with FRET to allow for examination of trimolecular complexes of transcription factors16. For this application, a CFP tagged protein is used as the donor and the BiFC complex is used as the acceptor (i.e. YFP, Venus). This approach allows for the temporal monitoring of a protein complex and a third interacting protein of interest. These combinations of techniques allow for great versatility in the application of BiFC technology to determine protein:protein interactions. Defining the localization of protein complexes in the cell is essential to deciphering physiological processes. Thus, BiFC represents an excellent tool in aiding this understanding.

The ITSN, PI3K-C2β, and control vectors used in this protocol are available from the authors upon request, for non-commercial purposes only. The authors wish to acknowledge Dr. Chang-Deng Hu for kindly providing advice and the reagents used in establishing the BiFC protocol in the O'Bryan laboratory. KAW was supported by funding from the Foundation Jerome Lejeune. Work in the O'Bryan laboratory is supported by grants from the NIH (HL090651), DOD (PR080428), the St. Baldrick's Foundation, and the Foundation Jerome Lejeune. 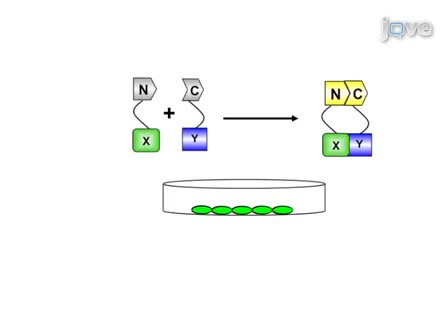