Fopius arisanus is an egg-larval parasitoid of Tephritid fruit flies that is successfully used in biological control of these important tropical pests. We describe here an optimized protocol for rearing F. arisanus on a small scale using readily available materials.

Fopius arisanus (Sonan) is an important parasitoid of Tephritid fruit flies for at least two reasons. First, it is the one of only three opiine parasitoids known to infect the host during the egg stage1. Second, it has a wide range of potential fruit fly hosts. Perhaps due to its life history, F. arisanus has been a successfully used for biological control of fruit flies in multiple tropical regions2-4. One impediment to the wide use of F. arisanus for fruit fly control is that it is difficult to establish a stable laboratory colony5-9. Despite this difficulty, in the 1990s USDA researchers developed a reliable method to maintain laboratory populations of F. arisanus10-12. There is significant interest in F. arisanus biology13,14, especially regarding its ability to colonize a wide variety of Tephritid hosts14-17; interest is especially driven by the alarming spread of Bactrocera fruit fly pests to new continents in the last decade18. Further research on F. arisanus and additional deployments of this species as a biological control agent will benefit from optimizations and improvements of rearing methods. In this protocol and associated video article we describe an optimized method for rearing F. arisanus based on a previously described approach12. The method we describe here allows rearing of F. arisanus in a small scale without the use of fruit, using materials available in tropical regions around the world and with relatively low manual labor requirements.

We report here results from quality control procedures conducted on the USDA-ARS F. arisanus rearing operation in Hilo, Hawaii between January 5 and June 22, 2010. Rearing at the Hilo location on the scale described in this video article and protocol was initiated in August 2009, and initial problems and adjustments with the new location had been mostly resolved by January. Therefore, these data are representative of the results other researchers might obtain starting their colony if they follow the protocol as described and have experience rearing insects generally. During this period we were maintaining a small colony of F. arisanus: 4 parasitoid holding cages produced per week, equivalent to about 3600 F. arisanus.

An initial check of enriched parasitization rates was conducted by taking a 2 g sample of pupae in the size range of 1.65 – 2.26 mm (enriched) before an additional week of development in a holding cage (i.e. immediately after the larval diet was removed and the pupae sifted and size sorted. We refer to these as 'early pupae'). During the first three months of 2010 the mean proportion parasites in the enriched sample was 0.46 (SD=0.18). During the following quarter this mean was 0.58 (SD=0.08), reflecting stabilization of the colony and rearing procedures at the new location. Note that the enriched pupae which were not successfully parasitized include those which did not produce emergents and those that produced flies.

After an additional week in the holding cage removal of empty puparia another two gram sample was taken ('late pupae'). Fruit flies represented under 1% of this second sample. The low percentage of fruit flies is partially due to to the earlier emergence of flies compared with parasites, so most flies remained in the holding container.

Finally, Figure 1 gives the yield in pupal mass from January to June 2010. The yields are measured from pupae enriched in the size range of interest, 1.65-2.26 mm. The large mass of 'early pupae' at the beginning of the year indicates a high proportion of fruit flies and unemerged pupae at that time, while adjustments were being made to the new facility. 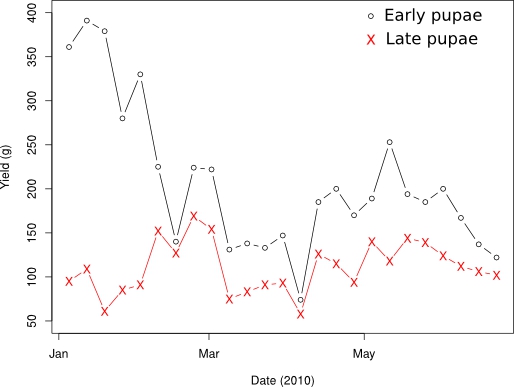 In this protocol and accompanying video article we have described and demonstrated an optimized protocol for rearing F. ariasnus, a parasitoid of Tephritid fruit flies, in a laboratory setting. This protocol has been refined over the years to minimize the amount of labor and specialized equipment needed to maintain a colony. We note that a well established, productive and stable colony of host fruit flies is required for any attempt at rearing parasitoids. In our insectary we use Bactrocera dorsalis as a host fruit fly, but other species have been shown to be competent hosts as well14-17.

Several aspects of F. arisanus colony maintenance remain to be explored. These include the rate of laboratory adaptation in this species10, mechanisms of learning22 and the genetic changes that might occur with adaptation and mechanisms which may be involved in host fruit fly plasticity.

Over the last ten years there have been multiple examples of the spread of Dacine flies throughout the world, particularly those in the genus Bactrocera: B. dorsalis in French Polynesia, B. carambolae in parts of South America, B. invadens in Africa and B. zonata in Africa and Northern Mediterranean.3,23,18 Testing the effectiveness of biological control agents such as F. arisanus against other Bactrocera species should be a high priority, and it is our hope that application of the methods described in this protocol and accompanying video article, will accelerate research on F. arisanus in a wider variety of locations24. Finally, further research using this method as a starting point may also provide important information to the colonization of novel egg parasitoids25,1

We have no conflicts of interest to report.

We thank Keith Shigeteni for assistance in the insectary and Natasha Sostrom for help with computer graphics. This work was funded by USDA-ARS. Opinions, findings, conclusions or recommendations expressed in this publication are those of the authors and do not necessarily reflect the views of the USDA. USDA is an equal opportunity provider and employer. 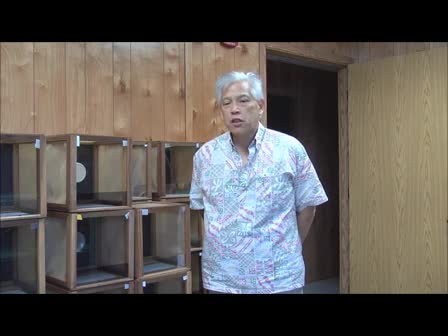