Image-based cytometry bridges the gap between these two methods, enabling the quick visualization and simultaneous quantitative analysis of thousands of cells in heterogeneous populations2. Here, we present a method for performing cell viability and green fluorescent protein (GFP) expression assays using the Tali Image-Based Cytometer3. The Tali instrument is a 3-channel (bright field, green fluorescence, red fluorescence) benchtop assay platform that offers several advantages over flow cytometry and fluorescence microscopy. The Tali cytometer is less expensive, takes up less bench space, requires less maintenance, and the work flow has been simplified so that the operation and analysis is much simpler and quicker. The Tali cytometer is capable of performing a range of suspension cell-based assays, including GFP and red fluorescent protein (RFP) expression, apoptosis4-6 and cell viability analysis with propidium iodide (PI)7-11.

Here, we demonstrate the use of the Tali instrument in performing a cell viability assay in cells expressing GFP. GFP-transduced cells are stained using the Tali Viability Kit - Dead Cell Red. The cells are then pipetted into a Tali Cellular Analysis Slide and loaded into the cytometer. Bright field, red fluorescence and green fluorescence images are captured and analyzed using assay specific algorithms. Histograms are then generated to display cell size, PI fluorescence intensity, and GFP fluorescence intensity. These parameters can then be thresholded to home in on a specific cell population.

A side-by side comparison of the Tali Image-Based Cytometer and traditional flow cytometry demonstrates that the two methods provide comparable data regarding cell viability and protein expression. However, the Tali instrument provides additional visual information about the cell population that cannot be obtained using a flow cytometer.

The Tali Image-Based Cytometer was used to measure the fluorescent protein expression level in cells that were transduced with a nuclear-targeted GFP BacMam 2.0 expression construct. Four representative cell types were transduced (U2OS, 293MSR, HEKn, and CHO-S). For these cell lines, the number of cells that were expressing GFP was reported by the Tali cytometer and compared with data from the same samples analyzed on a flow cytometer. Additionally, cells were stained with Dead Cell Red reagent using the Tali Viability Kit to identify the dead cell population both on the Tali cytometer and on a flow cytometer.

The graphical representations in Figure 2 show the percent of the total population for each cell type that were expressing GFP. These data demonstrate that the Tali cytometer produces data comparable to data generated by a flow cytometer.

Figure 1. Cells should be properly focused prior to analysis. Tali Cellular Analysis slides with cell concentrations appropriate for analysis (1 x 105 to 1 x 107 cells are recommended). (LEFT) In-focus cells are uniformly dark throughout the cell, with a bright halo around each cell. (CENTER) Cells may be undercounted when the transition between the background and the edges of the cells are fuzzy and the cells have undefined boundaries (RIGHT) Cells maybe overcounted when they have bright centers and dark perimeters. 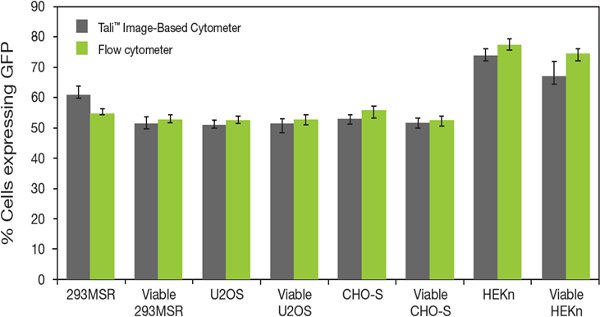 We have just detailed a procedure for performing viability counts and assessing GFP expression using the Tali Image-Based Cytometer. Using the same procedure, this cytometer is capable of performing a number of other assays including: apoptosis, RFP and cell viability analysis using non-transduced cells.

Fluorometric assays of cell viability, gene expression and apoptosis have become key methodologies in biomedical research7-12. In the past, separate instrumentation has been used to obtain quantitative and visual information about cells. While quantitative information about cells within a heterogeneous population has been garnered through the use of flow cytometry, visual or qualitative information has been gathered through the use of fluorescence microscopy 1-4. Here, we present a technology that bridges the gap between population and individual cell studies. Using the Tali Image-Based Cytometer, quantitative data and visual cell data about individual cells or cell populations can be collected simultaneously. The Tali instrument can be used for a range of applications including assessment of gene expression, apoptosis assays, studies of drug efficacy, and assessment of disease progression.

The Tali Image-Based Cytometer captures and analyzes bright-field, red fluorescence and green fluorescence images, allowing information about subpopulations of cells to be obtained. For example, in this assay, we were able to distinguish dead cells from live cells within the GFP-expressing cell population using Dead Cell Red dye. This gives accuracy in the measurement of viable cells expressing GFP, and identifies the population of cells useable for downstream processing. It is important to note that the dead cells in the population could arise from various sources, including normal cell death in culture or cell death caused by environmental conditions (e.g., trypsinization or death induced by the transfection/transduction method chosen).

Here we demonstrate the use of the Tali cytometer with U2OS cells. Similar methods can be performed using most mammalian and insect cells. For each cell line, the Tali cytometer produced quantitative GFP expression data, which is not possible with a visual inspection of the cells using a standard fluorescence microscope. Although these results are comparable to flow cytometry, they are collected in a fraction of the time. The cytometer is capable of accurately counting cells between 5 μm to 60 μm in diameter, ideally at a concentration of 1 x 105 to 1 x 107 cells/mL.

It's important to point out that most standard staining protocols, including the Dead Cell Red staining protocol described here, use propidium iodide to distinguish live and dead cells. This presents a challenge when assessing viability in cells that have been permeabilized for staining of intracellular markers, since PI will stain any cell with a compromised membrane. Since any fluorescent dye or protein that can be detected with the green or red fluorescence channels can be analyzed on the Tali Image-Based Cytometer, future studies may explore the use of alternate dyes, such as amine reactive viability dyes4. A 2006 study by Perfetto et al.12 found these dyes to be easy to use and reproducible in discriminating live and dead cell populations.

Note that the Tali has limitations with respect to the types of assays it can perform. For example, since the objective used by the instrument is 4X, counting operations are limited to larger cell types: sub-cellular structures such as mitochondria or vesicles, and bacterial cells cannot be quantified. Also note that the detection channels in Tali are limited to fluorophores that will excite and emit within the channels. While YFP and bright mCherry signals can be detected, dimmer mCherry signals cannot. Finally, the Tali only analyzes cells in suspension. It will not accurately count cells adhering to a slide. Moreover, while there is only limited capability for counting cells that are irregularly shaped, including some yeast and primary cells.

In addition, future studies will likely address the use of this system in assessing the expression of intracellular markers. Individual dyes can be checked for spectral overlap with adjacent channels, using Invitrogen's online SpectraViewer tool (www.invitrogen.com/spectraviewer). Given the newness of this technology, the full range of applications has yet to be discovered.

In summary, the Tali Image-Based Cytometer demonstrated here presents a new technology that allows for simultaneous visualization and analysis of cell populations, enabling assessment of individual cells as well as cell populations in a compact format with a simple workflow. 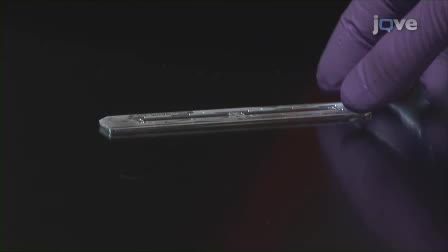