Embryonic stem cells (ESC) have two main characteristics: they can be indefinitely propagated in vitro in an undifferentiated state and they are pluripotent, thus having the potential to differentiate into multiple lineages. Such properties make ESCs extremely attractive for cell based therapy and regenerative treatment applications 1. However for its full potential to be realized the cells have to be differentiated into mature and functional phenotypes, which is a daunting task. A promising approach in inducing cellular differentiation is to closely mimic the path of organogenesis in the in vitro setting. Pancreatic development is known to occur in specific stages 2, starting with endoderm, which can develop into several organs, including liver and pancreas. Endoderm induction can be achieved by modulation of the nodal pathway through addition of Activin A 3 in combination with several growth factors 4-7. Definitive endoderm cells then undergo pancreatic commitment by inhibition of sonic hedgehog inhibition, which can be achieved in vitro by addition of cyclopamine 8. Pancreatic maturation is mediated by several parallel events including inhibition of notch signaling; aggregation of pancreatic progenitors into 3-dimentional clusters; induction of vascularization; to name a few. By far the most successful in vitro maturation of ESC derived pancreatic progenitor cells have been achieved through inhibition of notch signaling by DAPT supplementation 9. Although successful, this results in low yield of the mature phenotype with reduced functionality. A less studied area is the effect of endothelial cell signaling in pancreatic maturation, which is increasingly being appreciated as an important contributing factor in in-vivo pancreatic islet maturation 10,11.

The current study explores such effect of endothelial cell signaling in maturation of human ESC derived pancreatic progenitor cells into insulin producing islet-like cells. We report a multi-stage directed differentiation protocol where the human ESCs are first induced towards endoderm by Activin A along with inhibition of PI3K pathway. Pancreatic specification of endoderm cells is achieved by inhibition of sonic hedgehog signaling by Cyclopamine along with retinoid induction by addition of Retinoic Acid. The final stage of maturation is induced by endothelial cell signaling achieved by a co-culture configuration. While several endothelial cells have been tested in the co-culture, herein we present our data with rat heart microvascular endothelial Cells (RHMVEC), primarily for the ease of analysis.

Addition of Activin A and Wortmannin to undifferentiated hESC for 4 days induces definitive endoderm as confirmed by qRT-PCR analysis for DE markers Sox17, Cxcr4, and Foxa2 and immunostaining for Sox17 as illustrated in Figure 2. Differentiation to pancreatic progenitor cells after addition of cyclopamine and retinoic acid was confirmed by qRT-PCR of pancreatic progenitor markers and Immunostaining for Pdx1 as illustrated in Figure 3.

At the final stage of differentiation, contact co-culture with RHMVEC cells strongly induced upregulation of insulin expression in the hESC derived pancreatic progenitor cells. The efficiency of co-culture mediated differentiation was analyzed by comparing with control condition using DAPT. DAPT was used as a positive control since it is currently one of the most widely used methods to achieve pancreatic maturation. Since the co-culture was performed in a modified media supplemented by factors supportive of endothelial cells, additional control was performed with the media in absence of endothelial cells to verify the effect of media on differentiation. Details of this analysis are presented in Figure 4. 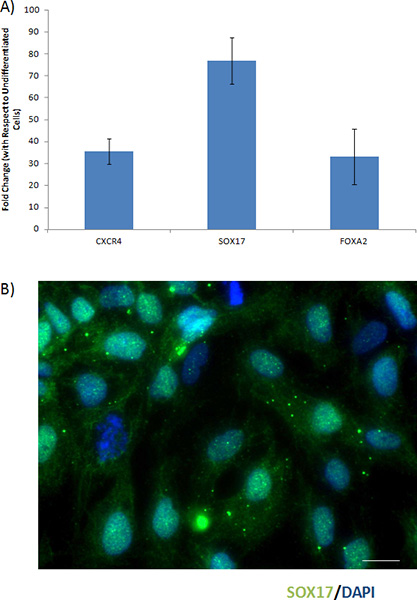 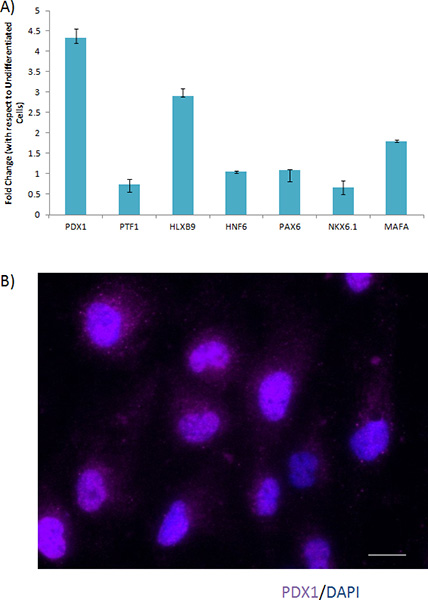 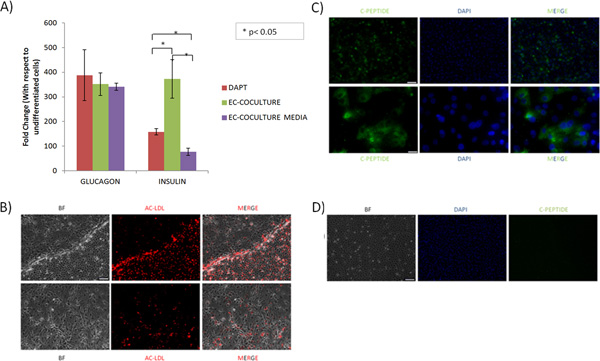 Multiple endothelial cells were used in this protocol, all of which resulted in similar overall effect although with variations in efficiency of differentiation. In the current report we present the effect of co-culturing hESC derived pancreatic progenitor cells with rat heart microvascular endothelial cells (RHMVEC). Endothelial cells can be conveniently visualized by AC-LDL staining, which is specific to only endothelial cells. Co-culture of the differentiating ESCs with pre-stained endothelial cells showed that while most of the endothelial cells were viable in culture for extended period of time, the RHMEV gradually disappear after 4 days and could no longer be detected after 6 days of maturation. Absence of the RHMVEC simplifies analysis by eliminating the need for sorting, hence was chosen for optimization of the co-culture protocol.

While the present study clearly indicates the positive effect of endothelial cells in inducing pancreatic maturation, the exact mechanism of such induction is still unknown and being currently investigated in our laboratory. A few plausible mechanisms could be (i) the effect of cell-secreted molecules (ii) endothelial cell mediated inhibition of notch signaling (iii) the role of extracellular matrix secreted by the endothelial cells. While the first category does not require cell-cell contact, such contact is mandatory for the second and third category. Hence we performed some preliminary analysis using different co-culture configurations: (i) contact co-culture (ii) transwell co-culture and (iii) conditioned media culture. It was observed that contact co-culture resulted in maximum differentiation, as judged by insulin expression; followed by transwell co-culture; while conditioned media culture resulted in minimal effect on insulin expression (data not shown). These analyses indicate that while cell-cell contact is important, there might be some short lived secreted molecules which are important as well. 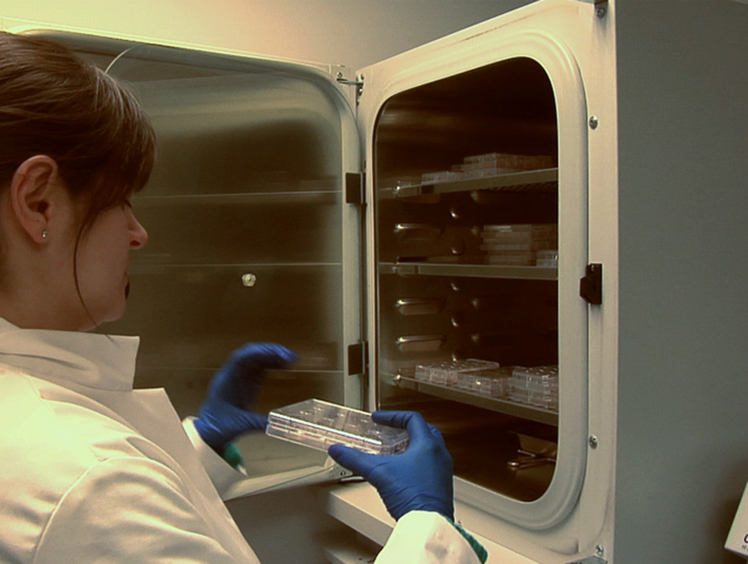