Sutures are usually needed to repair tissue during surgical procedures. However, their application can be problematic as they are invasive and may damage tissue. The fabrication and application methods of a novel tissue adhesive are here reported. This adhesive film is laser-activated and does not require the use of sutures.

Photochemical tissue bonding (PTB) is a sutureless technique for tissue repair, which is achieved by applying a solution of rose bengal (RB) between two tissue edges1,2. These are then irradiated by a laser that is selectively absorbed by the RB. The resulting photochemical reactions supposedly crosslink the collagen fibers in the tissue with minimal heat production3. In this report, RB has been incorporated in thin chitosan films to fabricate a novel tissue adhesive that is laser-activated. Adhesive films, based on chitosan and containing ~0.1 wt% RB, are fabricated and bonded to calf intestine and rat tibial nerves by a solid state laser (λ=532 nm, Fluence~110 J/cm2, spot size~0.5 cm). A single-column tensiometer, interfaced with a personal computer, is used to test the bonding strength. The RB-chitosan adhesive bonds firmly to the intestine with a strength of 15 ± 6 kPa, (n=30). The adhesion strength drops to 2 ± 2 kPa (n=30) when the laser is not applied to the adhesive. The anastomosis of tibial nerves can be also completed without the use of sutures. A novel chitosan adhesive has been fabricated that bonds photochemically to tissue and does not require sutures.

The films that are obtained are bright rose in color, thin and have a smooth surface (Figure 1). They are also flexible and can be rolled into tubes of small diameter without causing tears or any other apparent damage (Figure 1B). The rose adhesive has two absorption peaks at 530 and 562 nm; the green laser is thus strongly absorbed by the adhesive and the corresponding attenuation length at 532 nm is ~12 μm (Figure 3). In contrast, chitosan films without RB attenuates weakly the laser (1/A ~162 μm), likely due to scattering. It appears from the spectra plot that no significant aggregation of RB occurs in the films.

The rose adhesive bonds firmly to the intestine upon laser irradiation (Figure 2) achieving a typical maximum load at failure of 0.9 ± 0.4 N (n=30). The adhesive strength was estimated as the maximum load divided by the adhesive surface area, namely, 15 ± 6 kPa (n=30). The non-irradiated rose adhesive bonded significantly less to tissue (2 ± 2 kPa, n=30, unpaired t-test p<106). The in-vivo anastomosis of the tibial nerve was successfully achieved following the application and bonding of the rose adhesive in conjunction with the green laser. One week postoperatively, the operated nerve was in continuity and the repair strength was 17 ± 9 kPa (n=10). 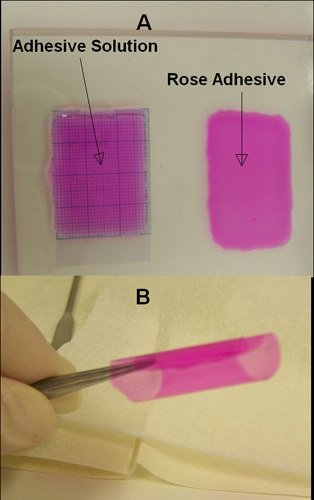 Figure 1. A) The RB-chitosan solution is casted on a flat Perspex slab (slab thickness~5 mm). Graph paper is placed underneath the slab to facilitate the dry-cast step. The water-insoluble film is obtained two weeks after casting. B) The rose adhesive is flexible and can be rolled into a small cylinder. 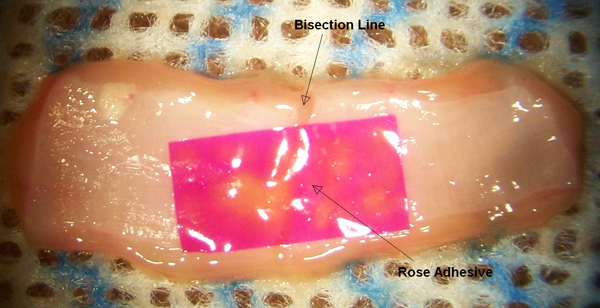 Figure 2. The rose adhesive is bonded to calf intestine after laser irradiation. Uniform irradiation is applied on the RB adhesive during tissue-bonding; however selected spots are shown in this picture to illustrate the photo-bleaching effect of the laser on the adhesive. 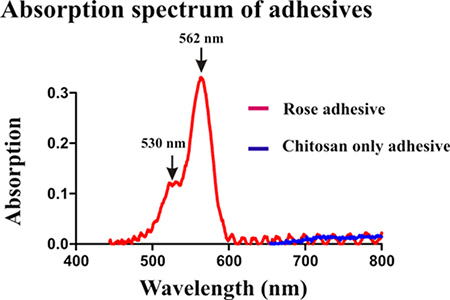 Figure 3. The absorption spectrum (in arbitrary units) of the rose adhesive shows two peaks at 530 and 562 nm. The green laser (λ= 532 nm) is thus strongly absorbed by the adhesive during the laser exposure. The chitosan adhesive without RB absorbs poorly the laser beam.

The rose adhesive fabrication is based on a simple dry-cast process, though the dissolution of RB in acidic pH requires prolonged stirring of the chitosan solution. It is important to let the solution dry up until it becomes a water-insoluble film. This happens when the weight water content is ~10% in the dried film6. Insoluble films are usually obtained 2 weeks after dry-casting at standard conditions of temperature and pressure (~25 °C and ~1 atm). The mechanism of tissue bonding is not clear yet, although it was observed that RB diffuses from the adhesive into the adjacent tissue, allowing the laser to photo-activate it efficiently at the tissue interface. It may be speculated that the RB ability of producing singlet oxygen, upon light irradiation, may play a role in crosslinking tissue collagen and chitosan via their amino groups7,8. A recent study on the rose adhesive showed also that the maximum temperature achieved during the tissue-adhesive bonding was ~32 °C, supporting the hypothesis of a photochemical process4. Other sutureless techniques for tissue repair are currently investigated by several research groups. Laser tissue welding (LTW) for example has been successfully applied in ophthalmic surgery by Pini et al 9. In general though, LTW can cause collateral thermal damage as tissue temperature can reach 65-75 °C during laser irradiation. Cyanoacrylate glues are also applied clinically to close skin wounds instead of sutures; nevertheless they are generally not used for internal organ repair due to their toxicity 10. Although the rose adhesive (~15 KPa) has higher bonding strength than fibrin glues (~8 kPa) 11, cyanoacrylate glues still provide the strongest adhesion (~150 kPa) 12. The thickness of the rose adhesive requires particular attention during fabrication: a thick adhesive (≥20 μm) would, for example, prevent the laser from reaching the tissue interface and would weaken the bonding strength due to excessive absorption of the laser by the rose bengal. A thin adhesive (<10 μm), on the other hand, would increase the laser irradiance and fluence at the adhesive-tissue interface. However, care should be taken in reducing the film thickness in order to prevent excessive heating of tissue during laser irradiation. The rose adhesive induces no significant cytotoxic effects on human fibroblasts4 and has thus a promising use in repairing soft tissue inside the body, such as intestine and peripheral nerves. This adhesive can also have applications in tissue engineering: It can be integrated, for example, in a bandage with extracellular matrices to repair tissue and enhance wound healing without the aid of sutures13. It should be noted that we have not observed any significant adverse effects, including localized inflammation, to be associated with this procedure.

This work was supported by the UWS Research Grant. 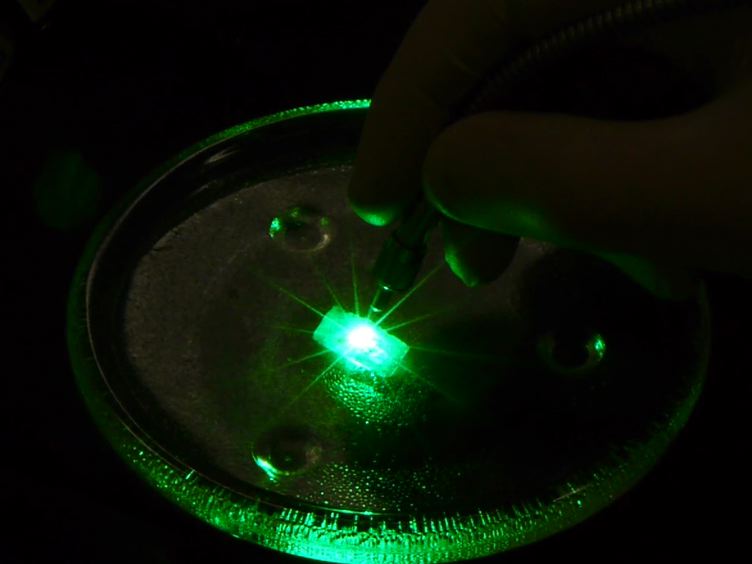