We describe the protocols used to investigate the interactions of 13.56 MHz radiofrequency (RF) electric-fields with gold nanoparticle colloids in both non-biological and biological systems (in vitro/vivo). These interactions are being investigated for applications in cancer therapy.

Cancer therapies which are less toxic and invasive than their existing counterparts are highly desirable. The use of RF electric-fields that penetrate deep into the body, causing minimal toxicity, are currently being studied as a viable means of non-invasive cancer therapy. It is envisioned that the interactions of RF energy with internalized nanoparticles (NPs) can liberate heat which can then cause overheating (hyperthermia) of the cell, ultimately ending in cell necrosis.

In the case of non-biological systems, we present detailed protocols relating to quantifying the heat liberated by highly-concentrated NP colloids. For biological systems, in the case of in vitro experiments, we describe the techniques and conditions which must be adhered to in order to effectively expose cancer cells to RF energy without bulk media heating artifacts significantly obscuring the data. Finally, we give a detailed methodology for in vivo mouse models with ectopic hepatic cancer tumors.

The absorption of RF energy by biological tissue (due to their inherent electrical permittivity) results in elevated tissue temperatures as a function of time, which eventually leads to cell death by hyperthermia. It is hypothesized that cancer hyperthermia can be optimized through the use of targeted nanomaterials that internalize within the cancer cell and act as RF-thermal transducers, leaving the neighboring healthy, normal cells intact. Several reports have already shown that a variety of NPs can act as effective RF heat sources which aid in cancer necrosis1-4.

In these regards, gold NPs (AuNPs)3-5, carbon nanotubes1, and quantum dots6, 7 have exhibited exciting characteristics when used in both in vitro and in vivo RF experiments. Although the exact nature of the heating mechanism of these NPs when exposed to an RF-field is still being debated, a series of fundamental experiments using AuNPs has placed great significance on both NP size and aggregation states. It was shown that only AuNPs with diameters <10 nm will heat when exposed to an RF-field8. Also, this heating mechanism is significantly attenuated when the AuNPs are aggregated. This aggregation condition was also validated within in vitro models that placed importance upon optimizing AuNP colloidal stability within endolysomal intracellular compartments for efficacious RF therapy4. However, the techniques and experimental principles used to collect and assess this data can be problematic, especially in the case of validating RF heat profiles from NP colloids.

Several reports have shown that Joule heating of the background ionic suspension that the NPs are suspended in can be the main source of RF heat production and not the NPs themselves9-12. Although our recent paper8 has validated the use of RF interactions in generating heat from AuNPs of diameters less than 10 nm, we aim to describe these protocols in more detail throughout this article.

We also demonstrate the protocols and techniques needed to evaluate the effectiveness of AuNPs as hyperthermic thermal agents in both in vitro and in vivo experiments for liver cancer models. Although we focus primarily on simple colloids of citrate-capped AuNPs, the same techniques can be applied to other AuNP hybrids such as antibody- and chemotherapy-conjugated complexes. By adhering to these principles the experimentalist should hopefully be able to rapidly evaluate the potential for any nanomaterial to be an effective RF-induced thermal hyperthermic agent.

A complete experimental overview is depicted in Figure 1.

Further details are depicted in steps 1-3 below.

1. Assessing RF Heating of NP Colloids: AuNPs as an Example

1. Assessing RF heating of NP colloids: AuNPs as an example.

After following section 1.1 - 1.2.3 expect to have a highly concentrated, stable, and purified solution of 5 nm and 10 nm diameter AuNPs. From the 500 ml as-purchased stock solution, expect to obtain at least 4 ml of solution at a concentration of 1,000 mg/L. The difference in HRs between the AuNPs and the background DI water buffer solution at this concentration should be ~0.25 °C/sec and 0.1 °C/sec for 5 nm and 10 nm AuNPs, respectively, as is shown in Figure 2.

The results should ideally show that cells exposed to an RF field which have internalized AuNPs are less viable than the non-AuNP RF exposed cells. An example of such expected results are highlighted in Figure 3.

Upon injection of PBS-suspended AuNPs and after the RF exposure treatment of ~2-3 weeks, posthumous analysis should reveal controlled tumor growth and/or a decrease in tumor size/mass (as shown in Figure 4). There may also be evidence of direct cellular thermal ablation. However, this may not be the case as simple citrate-capped AuNPs are far from being optimized and tend to aggregate within the tumor tissue. As can be seen in recent publications, AuNPs must be non-aggregated within intracellular organelles to enhance RF-induced cytoxicity. Also, recent studies have shown that conjugation of chemotherapy drugs such as Gemcitabine to AuNPs optimizes the RF therapy. The investigator can still use these protocols however to directly compare the effectiveness of their own AuNP-complex in relation to our groups' previous work. 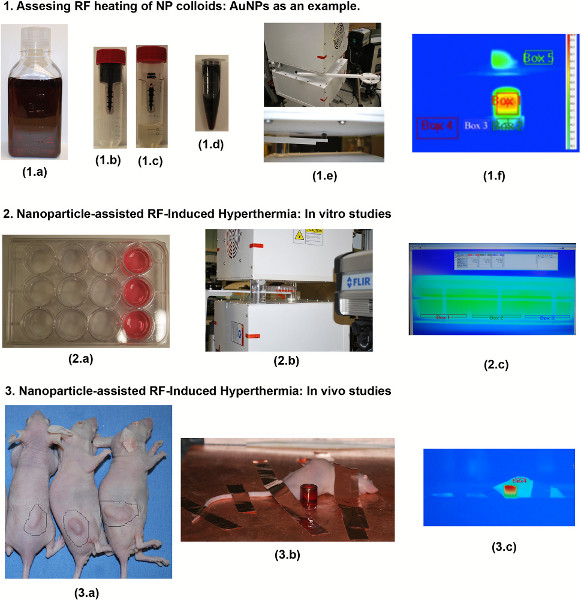 Figure 1. Experimental overview. AuNP heating assessment: As-purchased AuNPs (1.a) are placed in a 50 kDa filter (1.b) and centrifuged down to separate the AuNPs from the filtrate (1.c). This allows for highly concentrated and purified AuNPs to be formed (1.d). The sample is then placed into the RF system using a Teflon sample holder mounted to an adjustable rotary stage (1.e). The AuNPs heating rates, as well as four other control areas, are recorded using an IR camera (1.f). In vitro protocols: Hep3B hepatic cancer cells are grown in the front 3-wells of several 12-well cell packs as shown in 2.a (the amount of cell-packs used depends on what the experimentalist wishes to investigate in terms of applied RF power, AuNP concentration, controls, etc.). Each 12-well plate is then subjected to the RF field (2.b). Although not necessary as the optimum RF exposure time has already been determined the media temperature can also be recorded using the IR camera (2.c). In vivo protocols: BALB-C mice bearing ectopic hepatic tumors (3.a) were subjected to intra-tumoral injections of AuNPs and exposed to the RF system (3.b) for several minutes. Copper tape was used to ground the mice in order to prevent skin burning. A quartz cuvette filled with AuNPs is also shown next to the mouse to validate RF exposure. The tumor area should have a temperature higher than the rest of the mouse and usually appears red in the IR picture (3.c). 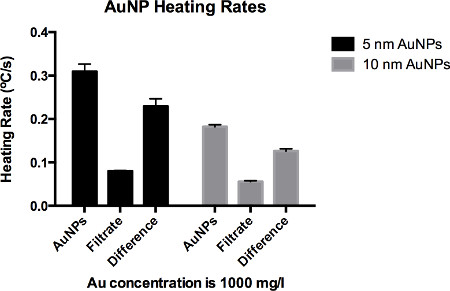 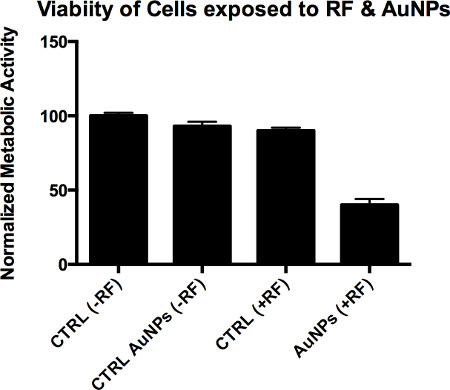 Figure 3. Idealized Hyperthermia cytotoxicity viability (MTT assay). Shown are four cell experiments: control (no RF), AuNP only (no RF), RF only, and RF with addition of cellular internalized AuNPs (A, B, C, and D , respectively). 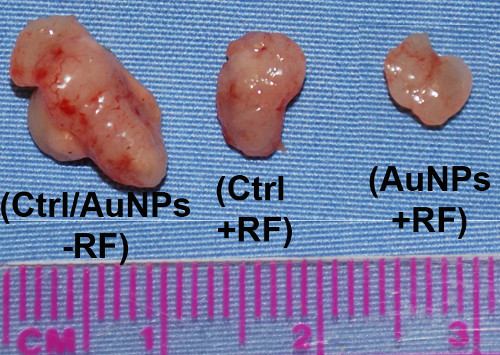 Figure 4. Posthumous analysis of ectopic mice tumors. The left-hand tumor is what would be expected from both control specimens i.e. no RF and no AuNP injection). The middle tumor shows a slight decrease in size when subjected to the RF field alone. However, the right-hand tumor shows that the RF+AuNP combined therapy can decrease/control the tumor growth even further.

These protocols allow the experimentalist to fully analyze the extent to which nanomaterials (in this case AuNPs) can increase RF-induced hyperthermia for cancer treatment. The first protocol specifically deals with analyzing heat production from highly-concentrated and purified AuNP samples. Although other groups have reported heat production primarily from the buffers which the AuNPs are suspended in and not the AuNPs themselves9-11, their RF systems used lower concentrations of AuNPs with diameters >10 nm, as well as lower RF operating powers with electric-field strengths <90 kV/m which are too low to see any noticeable RF heating effects from AuNPs. Only by following the protocols and parameters listed in this report can the experimentalist observe the nanoscale heat phenomenon.

The in vitro section allows development of cellular-RF-NP interfaces to be studied for optimized RF/NP-induced hyperthermia. Before addition of AuNPs and RF exposure, you should expect to have a viable 2D layer growth of the relevant cancer cell lines (in this case Hep3B). However, the correct RF exposure time for each cell line needs to be predetermined before these experiments by exposing cells to the RF field at different time points e.g. 2 -8 min) and looking at their viability profile after 24 hr. The correct RF exposure time to use should be where the cells are ~80% viable. In the case of Hep3B cells this was found to be ~3.5 min.

The simplest assay of choice for viability is the standard 3-(4,5-dimethylthiazol2-yl)-2.5-diphenyltetrazolium bromide (MTT) assay, although another assay may be needed if it is anticipated that the NPs will interact with the assay reagents (as was the case with MTT assay reacting with CNTs13). Other more advanced and detailed assays can be used to assess cell death mechanism such as FACS analysis with Annexin-V and propidium iodide (PI) staining. Future in vitro system developments within our group will look at placing the cells in a temperature-controlled RF-inert incubator to completely rule out any possible sources of hyperthermia due to bulk heating of the cell media. Also, the amount of AuNPs which need to be internalized within a cell for maximum cell death, as well as their stability within intracellular organelles, will be investigated in greater detail. This is in accordance with recent work which showed that AuNPs must be non-aggregated within lysosomes for enhanced RF-therapy4.

Finally, in vivo protocols were described to allow for full bio-analysis of AuNPs in ectopic hepatic cancer mice models for their ability to control or decrease tumor growth and/or size in combination with RF therapy. An important point for discussion is the ability for the RF-field to induce skin burns on the mouse due to incorrect grounding procedures. The use of properly grounded and placed copper tape, as mentioned in the protocol section, is a requirement in order to stop these burns.

Future in vivo work in our lab will work on assessing the actual mechanism of tumor death/size control from RF-AuNP exposure. Although it is hypothesized that hyperthermia plays a critical role, this has to be validated though the use of such controls as direct insertion of optical-fiber thermal probes into the tumor and surrounding healthy cells to look at the RF-induced temperature response of such tissues. Also, the development of an intracellular fluorescent thermal dye whose emission wavelength is a direct function of temperature would be an excellent tool for this validation and could also be used for in vitro models. 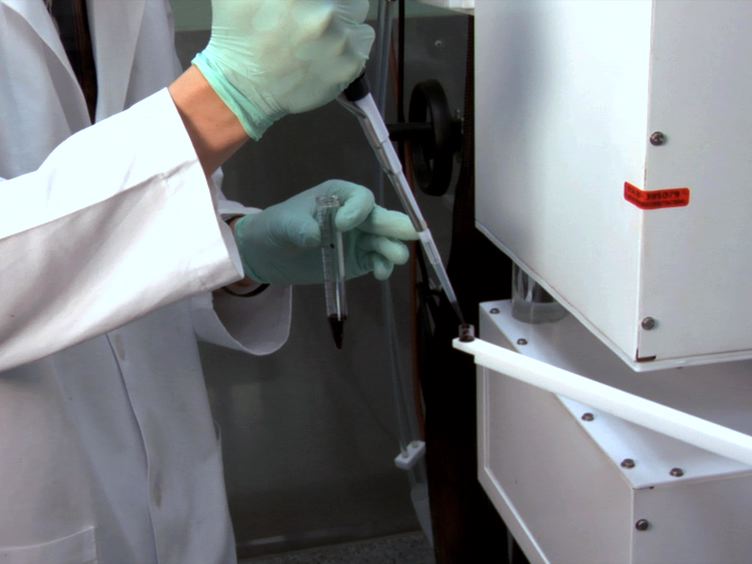