We present the procedure to assemble a seed coat bedding assay (SCBA) from Arabidopsis thaliana seeds. The SCBA was shown to be a powerful tool to explore genetically and in vitro how the endosperm controls seed germination in dormant seeds and in response to light cues. The SCBA is in principle applicable under any situation where the endosperm is suspected to influence embryonic growth.

The Arabidopsis endosperm consists of a single cell layer surrounding the mature embryo and playing an essential role to prevent the germination of dormant seeds or that of nondormant seeds irradiated by a far red (FR) light pulse. In order to further gain insight into the molecular genetic mechanisms underlying the germination repressive activity exerted by the endosperm, a "seed coat bedding" assay (SCBA) was devised. The SCBA is a dissection procedure physically separating seed coats and embryos from seeds, which allows monitoring the growth of embryos on an underlying layer of seed coats. Remarkably, the SCBA reconstitutes the germination repressive activities of the seed coat in the context of seed dormancy and FR-dependent control of seed germination. Since the SCBA allows the combinatorial use of dormant, nondormant and genetically modified seed coat and embryonic materials, the genetic pathways controlling germination and specifically operating in the endosperm and embryo can be dissected. Here we detail the procedure to assemble a SCBA.

The main function traditionally assigned to the endosperm is that of a nutritive tissue. However, it is becoming increasingly evident that the endosperm also plays a central role to control seed germination. This notion became first apparent in the case of dormancy, a trait exhibited by newly produced seeds. Dormant seeds fail to germinate despite the presence of favorable germination conditions. Seeds lose their dormancy after a ripening period and become nondormant, i.e. they will germinate when exposed to favorable germination conditions. In many plant species, including the model plant Arabidopsis, the seed coat is absolutely required to prevent the germination of dormant seeds since seed coat removal triggers embryonic growth and greening3,4. In Arabidopsis, Bethke et al. observed that germination remained repressed after removing the testa while maintaining the endosperm surrounding the endosperm5. These observations strongly indicated that the endosperm is the tissue within the seed coat exerting a repressive activity on the embryo. However, seed coat removal experiments do not necessarily help clarifying the nature of the germination repressive activity provided by the seed coat nor identifying the genes that implement it.

We recently introduced a seed coat bedding assay (SCBA) where seed coats and embryos are physically separated but kept in close proximity so that the germination repressive activity provided by the endosperm is maintained6. The SCBA allows the combinatorial use of dormant, nondormant, and genetically modified seed coat and embryonic materials. As a result, the genetic pathways controlling germination and specifically operating in the endosperm and embryo can be dissected. The SCBA was used in the context of dormancy to show that the endosperm releases the phytohormone abscisic acid (ABA) towards the embryo to repress its growth6. Furthermore we could use the SCBA to identify the signaling pathways operating in endosperm and embryonic tissues to promote dormancy.

The SCBA appears therefore to be a reliable technique to explore the function of the endosperm in the context of the control of seed germination. It is also a powerful tool to assess in vitro whether genes suspected to control germination operate in the endosperm, the embryo or both tissues. Here we detail the various steps required to assemble a SCBA.

Once the SCBA is assembled, the growth of embryos is monitored over several days. Therefore, before the seed dissection procedure and assembly of the SCBA, one needs to sterilize seeds to avoid future contaminations that could prevent proper assessment of the effect of seed coat material on embryonic growth.

All subsequent steps are performed inside a laminar flow cabinet to preserve sterile conditions.

The following steps necessitate working with a stereomicroscope placed inside the laminar flow hood cabinet. A Dumont forceps #5 with truncated (i.e. blunt) tips greatly facilitates the handling of the seeds (Figure 1A).

See discussion for the proper choice of the number of seed coats and embryos.

Panel 4 in Figure 3 was taken 80 hr after seed imbibition and shows a SCBA with ga1-21 embryos on a bed of 80 ga1-21 seed coats. Consistent with our hypothesis, ga1-21 mutant seed coats blocked the growth of ga1-21 embryos.

Previous work showed that in dormant seeds the seed coat synthesizes and releases ABA towards the embryo as a result of constitutive expression of the GA-response DELLA factor RGL2, which promotes ABA accumulation in imbibed seeds6,11. Under conditions where GA synthesis is blocked the DELLA factor RGL2 constitutively accumulates and promotes ABA accumulation11. Absence of RGL2 and ABA synthesis in ga1-21 seed coats is therefore expected to permit the growth of ga1-21 embryos in a SCBA. To test this hypothesis we used the aba2-1 mutant allele (Col ecotype), deficient in ABA synthesis as a result of a point mutation in the gene encoding Xanthosin dehydrogenase (AT1G52340) and the rgl2-14 T-DNA insertion line (Salk_027654, Col ecotype)16. 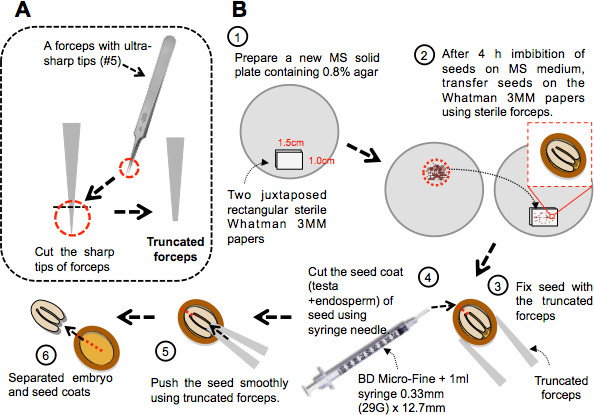 Figure 1. Procedure for seed dissection. A) Diagram describing how to make truncated forceps for seed dissection. Forceps can be truncated using scissors or pincers. When the forceps is closed the juxtaposed truncated tips should cover a surface about the size of a seed. B) Step 1: two side by side rectangular sterile Whatman 3MM papers are laid on a Petri dish plate containing MS solid medium. Step 2: seeds are transferred on the surface of the Whatman papers 4 hr after imbibition. Step 3: the dissection procedure requires holding the seed against the Whatman paper using the truncated forceps. Step 4: A syringe needle is used to cut the seed coat as shown. Steps 5 and 6: The juxtaposed tips of the closed forceps are used to gently push the embryo out of the seed coat through the site of the cut. 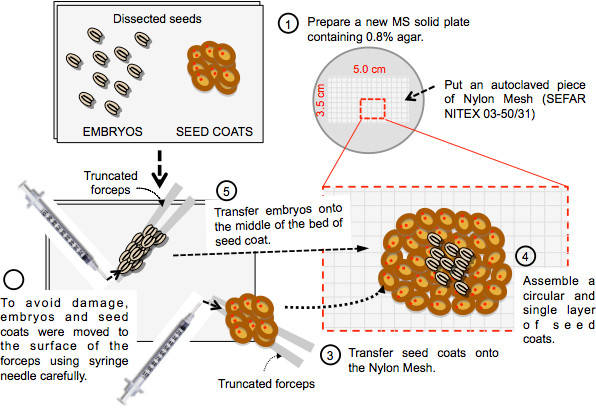 Figure 2. Procedure for assembly of the seed coat bedding assay. Step 1: A rectangular piece of Nylon mesh is laid on a Petri dish plate containing MS solid medium. Step 2 and 3: Dissected embryos and seed coats are gently moved to the edges of the forceps using the syringe needle prior to transfer them onto the Nylon mesh. Step 4 and 5: Assemble a circular and single layer of seed coats and dispose the embryos as a circular single layer on the center of the assembled seed coat bed.

The seed coat bedding assay (SCBA) procedure described here is in principle applicable to any circumstance where Arabidopsis seed germination is blocked (or delayed) and where the endosperm is suspected to implement this arrest. The latter can be evidenced by removing the seed coat (testa and endosperm) and observing that embryonic growth proceeds faster relative to that observed when embryos are surrounded by the seed coat. Germination may be blocked in response to particular environmental physical parameters (e.g. water potential or light quality) or in specific genetic backgrounds (e.g. absence of GA synthesis as in ga1 mutants, see Figure 3).

There are no general rules concerning the number of seed coats and embryos to be used for a SCBA. This depends on the seed batch (and in particular its freshness) and the type of experiment to be performed. It is therefore critical to adjust the amount of dissected material for each particular case by monitoring the growth on the embryos on the bed of seed coats on a daily basis. However, usually few seed coats are necessary when highly dormant Arabidopsis ecotypes are used. Shown below are typical amounts of seed coats and embryos that were used successfully when assembling SCBAs:

* Wild type Col seeds with 10 μM paclobutrazol (an inhibitor of GA biosynthesis) in the germination medium: Use 10 embryos and 100 seed coats. Add Paclobutrazol when the medium is cooled down to 50 °C before pouring into the Petri dish.

The only limitation of the SCBA technique is that it requires patience and dexterity so as to rapidly assemble the dissected seed materials while not killing the embryos. An experienced researcher can dissect 100 seeds within 20-30 min. However, less experienced users may need 1 hr and expect embryonic damage. To our knowledge there are so far no alternative techniques to explore the role of the endosperm for the control of seed germination.

This work was supported by grants from the Swiss National Science Foundation and by the State of Geneva. 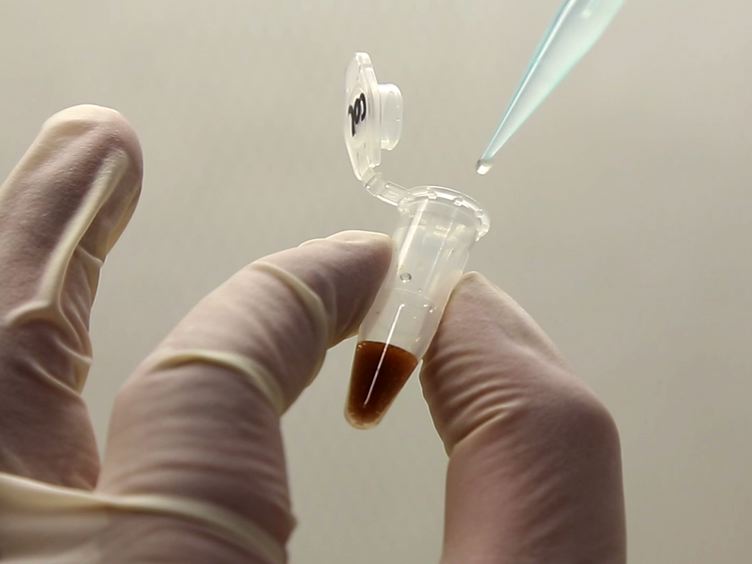