We present methods to study the effect of PSMs and other toxins secreted by Staphylococcus aureus on neutrophils using flow cytometry and fluorescence microscopy.

We present methods to study the effect of phenol soluble modulins (PSMs) and other toxins produced and secreted by Staphylococcus aureus on neutrophils. To study the effects of the PSMs on neutrophils we isolate fresh neutrophils using density gradient centrifugation. These neutrophils are loaded with a dye that fluoresces upon calcium mobilization. The activation of neutrophils by PSMs initiates a rapid and transient increase in the free intracellular calcium concentration. In a flow cytometry experiment this rapid mobilization can be measured by monitoring the fluorescence of a pre-loaded dye that reacts to the increased concentration of free Ca2+. Using this method we can determine the PSM concentration necessary to activate the neutrophil, and measure the effects of specific and general inhibitors of the neutrophil activation.

To investigate the expression of the PSMs in the intracellular space, we have constructed reporter fusions of the promoter of the PSMα operon to GFP. When these reporter strains of S. aureus are phagocytosed by neutrophils, the induction of expression can be observed using fluorescence microscopy.

Neutrophils (PMNs) are professional phagocytes that play a key role in the innate immune response against Staphylococcus aureus 1. The constant battle between host and microbe has led to an arms race of both. Recently, community-associated (CA) strains of meticillin resistant S. aureus (MRSA) have emerged that seem to be very efficient in circumvention of neutrophil killing 2,3. Excessive phenol soluble modulin (PSMs) production of CA-MRSA has been associated with higher virulence 4,5. Human neutrophils can recognize these PSMs via FPR2 which lead to activation of this G-protein coupled receptor 6. One of the earliest events is the mobilization of intracellular stores of calcium (Ca2+). Ca2+ acts as a secondary messenger for a variety of effector functions of PMNs including degranulation and phagocytosis 7. Therefore Ca2+ is a very sensitive indicator of the functional capacity of PSMs to activate PMNs. To study the effects of PSMs on neutrophils, fresh neutrophils are isolated and loaded with a dye that fluoresces upon calcium mobilization. In a flow cytometry experiment this rapid mobilization can be measured. Using this method, it is possible to study the direct effects of toxic and other components on neutrophils, and determine the lowest concentration at which these are active. For us, it is a very useful tool to study the effect of many proteins produced by S. aureus involved in immune evasion, such as FPR2 inhibitory protein (FLIPr) 8, FLIPr-like 7, and Chemotaxis inhibitory protein of Staphylococcus aureus (CHIPS) 9. All these proteins have been shown to inhibit the calcium mobilization in neutrophils by binding to the receptor recognizing the agonist.

Recently, our group has described that PSMs are functionally inhibited by serum lipoproteins 10 . These lipoproteins are abundantly present within the blood and human tissue, indicating that PSMs exert their function primarily in the intracellular environment. The availability of the calcium mobilization assay allowed us to precisely measure the effect of serum lipoproteins on activation of neutrophils by the PSMs, indicated by the considerable inhibition by very low concentrations of serum.

Since the PSMs are functionally inhibited by serum, we hypothesized that there is an important function for PSMs as intracellular toxins. We therefore sought to determine the role of PSMs after phagocytosis. To investigate the expression of the PSMs in the intercellular space, we have constructed reporter fusions of the promoter of the psmα operon to GFP. When these reporter strains of S. aureus were phagocytosed by neutrophils, the induction of expression was observable using fluorescence microscopy 10. Obviously, this technique allows the study of the expression of a large number of genes in S. aureus or other pathogens after phagocytosis. Since for S. aureus surviving in the intercellular niche is very important to overcome the innate immune system11 10 12, studying the role of genes activated in this niche is highly relevant to understanding its virulence.

1. Isolation of PMNs From Human Blood by Density Centrifugation

Incubating neutrophils with a concentration series of synthetic PSMα3 resulting in rapid activation as measured by calcium flux, which is shown by an increase in the signal in FL-1. Pre-incubation of synthetic PSMα3 with 0.01%, 0.1% or 1% human serum significantly inhibited the ability to elicit calcium fluxes (Figure 1).

Phagocytosed bacteria containing a PSMα-GFP reporter construct10 start to fluoresce green between 1 and 2 hr after phagocytosis, indicating expression from the PSMα promoter. Bacteria outside the neutrophils do not fluoresce, or show fluorescence only after the extracellular bacteria have formed dense microcolonies (Figure 2). These data indicate that the expression of PSMα is rapidly switched on when bacteria are phagocytosed by PMNs. 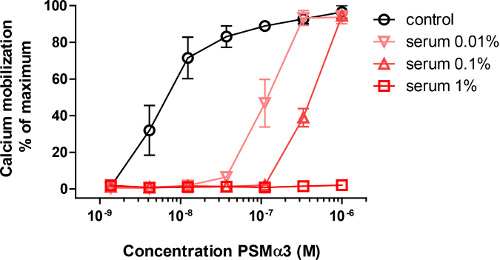 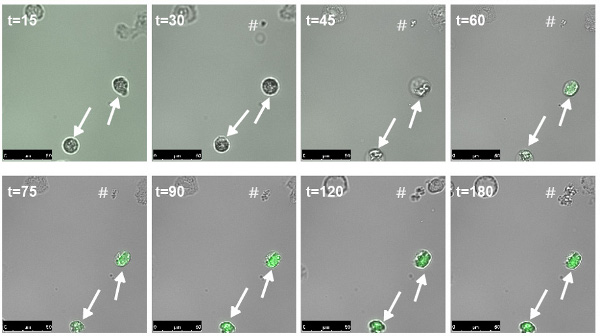 Figure 2. Induction of expression of PSMα after phagocytosis. Neutrophils were allowed to phagocytose S. aureus containing a reporter construct of the promoter of PSMα fused to GFP. Approximately 1 hr after start of phagocytosis the intracellular bacteria start to fluoresce green, indicating expression of the psmα operon, whereas the bacteria outside the neutrophil (#) do not induce the psmα expression in this timeframe (Adapted from reference 10). 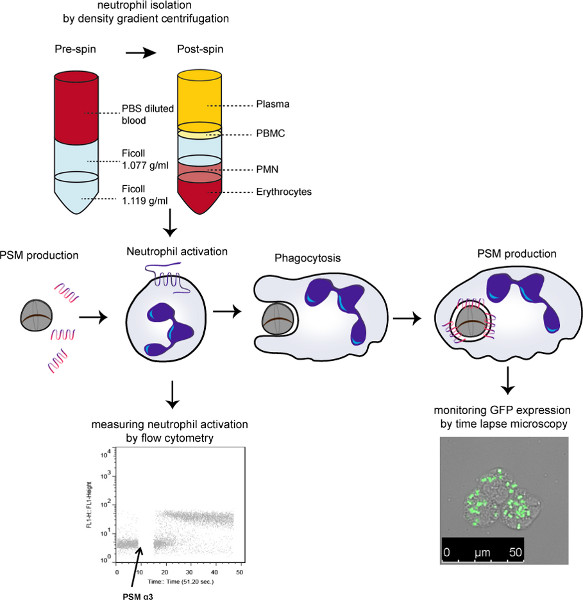 Figure 3. Schematic model of the experiments performed. Neutrophils were isolated and incubated with PSMs to measure the activation effect of these small amphipathic helices in a calcium mobilization assay. When serum was added, the PSMs were neutralized and no longer activated the neutrophils. To study the intracellular expression of the PSMs, a strain containing a fusion of the PSMα-promoter to GFP was mixed with serum and neutrophils to allow phagocytosis. GFP expression was followed using time-lapse fluorescence microscopy. Click here to view larger figure.

In the methods described here some steps are very critical. We will highlight these here.

For the isolation of neutrophils by density gradient centrifugation it is important not to disturb the layers during or after the centrifugation steps. When aspirating the neutrophils using a plastic pipette, make sure not to squeeze the balloon while in the layer of cells, as ejecting liquid will disturb the layers. Also, visually inspect the pellet of neutrophils after the osmotic shock and centrifugation step. If the pellet is still red the erythrocyte lysis was not effective enough, and should be repeated once more. If this happens regularly, increase the incubation time with deionized H2O by up to five seconds to get a more complete erythrocyte lysis.

For the calcium mobilization method it is important to have neutrophils that are isolated fresh. Generally, cells that have been stored in the fridge too long will not respond as well. They either might have activated already causing a decrease in the effect of the added stimulus, or have died and will not respond at all. Strong aggregation of neutrophils is a sign that they are not fresh anymore and should be discarded.

In the microscopy setup several things are important. To be able to observe an increase of GFP inside the bacteria, it is necessary that the highly stable GFP protein is removed from the bacteria by several dilution steps and growth under conditions where the gene of interest is expressed at a very low level or not at all. In our case, as the psmα operon is expressed at high cell densities13, two repeated dilution steps before the cells reach mid-log phase are sufficient. Also for these experiments, it is best that the neutrophils are fresh, especially since you might want to follow them for several hours in the microscope. Adding propidium iodide (PI) to the RPMI-HSA buffer will allow visualization of the disruption of the neutrophil membrane by the expression of the PSMs. When PI is added, make sure that the appropriate filters are available in the microscope so the red PI fluorescence does not interfere with the green GFP fluorescence. Especially when using long pass filters for GFP, the PI will definitely interfere. Another interesting option is to use multiple fluorescent reporters in the bacteria, such as a chromosomal integration of CFP coupled with a GFP reporter, which would allow for monitoring of all bacteria using confocal microscopy, where it is difficult to see non-labelled bacteria. Also in wide field fluorescence microscopy using multiple labels has clear advantages. A drawback of using the stable fluorescent reporters as we have done is their stability. The very slow turnover of the GFP protein allows only monitoring of the ON-switch of the reporter, the OFF-switch cannot be visualized easily. For this one would need to use either instable GFP constructs, or use a luminescence expression system powered by e.g. the Lux operon 14. 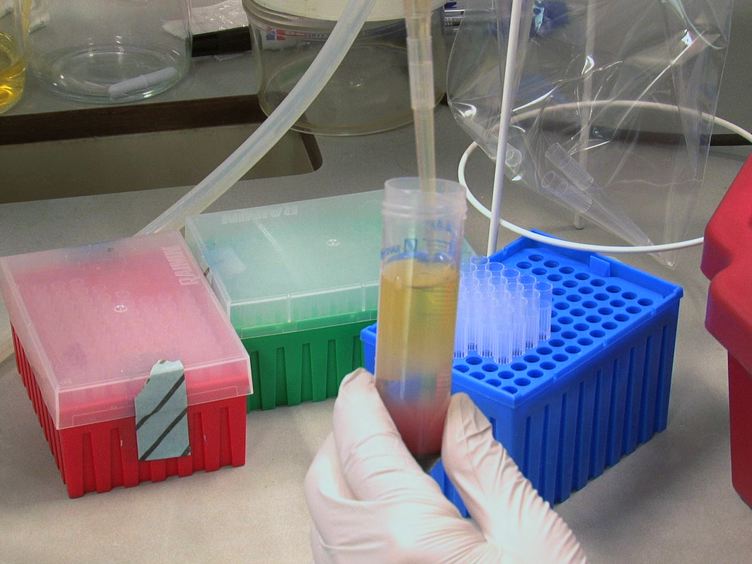