Mammalian cells expressing the bacterial bioluminescence gene cassette (lux) produce light autonomously. The resulting bioluminescent dynamics upon chemical exposure have been demonstrated to reflect the treatment effects on cellular growth and metabolism, making these cells an inexpensive, continuous, real-time toxicity screening tool that can easily be adapted for high-throughput automation.

Mammalian cell-based in vitro assays have been widely employed as alternatives to animal testing for toxicological studies but have been limited due to the high monetary and time costs of parallel sample preparation that are necessitated due to the destructive nature of firefly luciferase-based screening methods. This video describes the utilization of autonomously bioluminescent mammalian cells, which do not require the destructive addition of a luciferin substrate, as an inexpensive and facile method for monitoring the cytotoxic effects of a compound of interest. Mammalian cells stably expressing the full bacterial bioluminescence (luxCDABEfrp) gene cassette autonomously produce an optical signal that peaks at 490 nm without the addition of an expensive and possibly interfering luciferin substrate, excitation by an external energy source, or destruction of the sample that is traditionally performed during optical imaging procedures. This independence from external stimulation places the burden for maintaining the bioluminescent reaction solely on the cell, meaning that the resultant signal is only detected during active metabolism. This characteristic makes the lux-expressing cell line an excellent candidate for use as a biosentinel against cytotoxic effects because changes in bioluminescent production are indicative of adverse effects on cellular growth and metabolism. Similarly, the autonomous nature and lack of required sample destruction permits repeated imaging of the same sample in real-time throughout the period of toxicant exposure and can be performed across multiple samples using existing imaging equipment in an automated fashion.

In the U.S., pharmaceuticals and other products intended for human consumption require extensive assessment before they are approved for consumer use by the Food and Drug Administration. The financial burden for performing this testing is placed on the developer1, which substantially increases the cost of new compound development and therefore translates into an increased cost for consumers. While traditionally much of this screening has utilized animal subjects to act as proxies for human hosts, this has proven to be a large financial burden, with an estimated $2.8 billion spent annually on ADME/Tox (adsorption, distribution, metabolism, excretion, and toxicity) screening alone2 and mounting evidence suggesting that animal models cannot reliably predict human toxicological responses3. Therefore, in vitro human cell culture-based testing has gained popularity over the past two decades because of its relatively lower cost, higher throughput, and better representation of human bioavailability and toxicology4. Current cell culture-based toxicity screening methods employ various endpoints, such as the measurement of ATP levels, screening the activity of endogenously available cytoplasmic enzymes, probing the integrity of the cellular membrane, or tracking the level of mitochondrial activity, to evaluate cellular viability5,6. However, regardless of the endpoint chosen, these methods all require the destruction of the sample before measurements can be taken, thus only producing data at a single time point. As a result, large numbers of samples need to be prepared and treated in parallel for basic toxicological kinetics studies, again adding to the cost and labor required for new compound development. Alternatively, assays using secreted luciferase such as Gaussia luciferase7, Vargula luciferase8, and Metridia luciferase9 have been developed that eliminate the need for cell lysis and require a fraction of the media for endpoint measurement, however, these are still limited to sampling at predetermined time points and also require the addition of exogenous light-activating substrates.

To avoid the detriment of requisite sample destruction as well as to eliminate the cost of substrates, a human cell line has been engineered that expresses the full bacterial bioluminescence (lux) gene cassette (luxCDABEfrp) to allow for continuous monitoring of live cells that is similar to fluorescent-dye based live cell imaging, but without the additional photon-activating and microscopic investigation procedures. This cell line is capable of constitutively producing an optical signal for continuous, direct detection without the need for external stimulation, thus avoiding destruction of the sample. Mechanistically, the bioluminescent signal generated from these cells results when the luxAB-formed luciferase enzyme catalyzes the oxidation of a long chain fatty aldehyde (synthesized and regenerated by the luxCDE gene products using endogenous substrates) in the presence of reduced riboflavin phosphate (FMNH2, which is recycled from FMN by the frp gene product) and molecular oxygen10. Expression of the lux cassette in the host cell therefore enables light to be produced and detected without cellular destruction or exogenous substrate addition. Similarly, the interaction between the lux genes and the endogenously available FMN, and O2 cosubstrates, and the requirement for maintenance of an environment that can support the conversion of FMN to FMNH2, ensures that the resulting bioluminescent signal can only be detected from living, metabolically active cells.

In this study, the dynamics of autobioluminescent HEK293 cells were monitored continuously over a 24 hr period in response to antibiotic exposure (Figure 1). The toxic effects of this antibiotic, which is a member of the bleomycin family known to kill living cells by binding to and cleaving DNA13, were demonstrated via a decrease in bioluminescent production compared to untreated cells, which can be directly visualized through the pseudocolor images (Figure 2). The autobioluminescent nature of these cells, which permitted the repeated parallel screening of samples under varying treatment conditions, allowed for comparison of different concentrations at any given time point for easy dose-response analysis. For example, bioluminescence produced from cells after 15 hr, 18 hr, and 20 hr of treatment was plotted against chemical concentrations in Figure 3, showing that increasing antibiotic treatment resulted in the reduction of bioluminescent production in a dose-response manner. 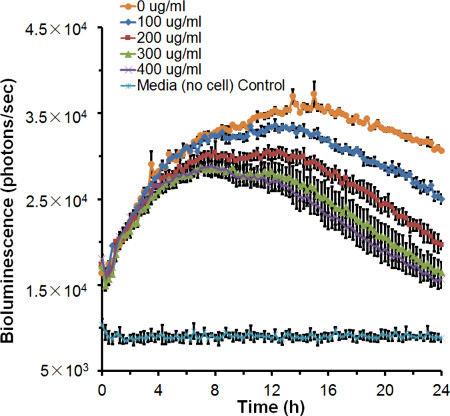 Figure 1. Continuous tracking of bioluminescent dynamics in response to chemical exposure. Constitutively bioluminescent HEK293 cells were exposed to various concentrations of an antibiotic of the bleomycin family. Bioluminescent production was monitored over a 24 hr period of exposure (representative data for technical triplicates on one plate, mean ± standard error) (reprint from 14). 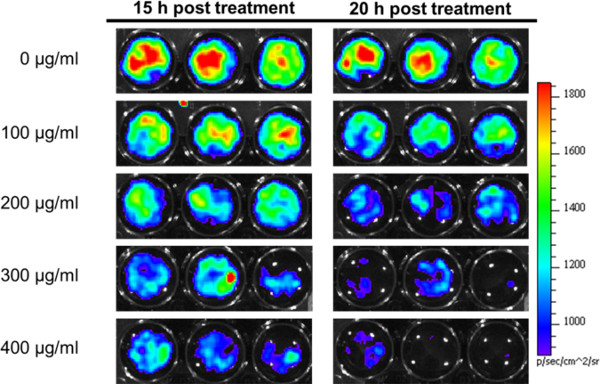 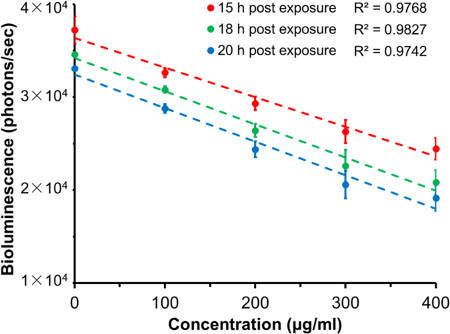 Figure 3. Dose-response of chemical exposure. The bioluminescent output after 15 hr, 18 hr, and 20 hr of exposure showed that increasing antibiotic treatment resulted in the reduction of light production in a dose-response manner (representative data for technical triplicates on one plate, mean ± standard error). R2 value is calculated for linear regression. 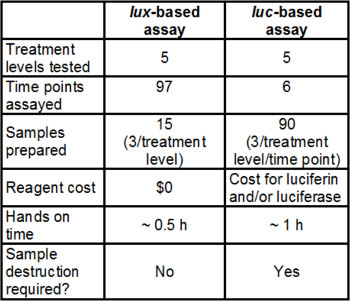 This method demonstrates the use of autonomously bioluminescent mammalian cells as an in vitro cytotoxicity screening assay that allows live cells to be continuously monitored over their lifetime. This protocol is flexible and can be modified to accommodate specific experimental conditions as required. For example, the experiment presented here is suitable for tracking acute toxic effects, but can be adapted to assess slow-acting or long term effects by repeatedly imaging at increased time intervals (i.e. every 24 hr) and maintaining the cells under standard incubation conditions between readings. In addition, the integration time can be adjusted based on the bioluminescent cell line. A preliminary experiment of imaging with various integration times can be performed to determine the optimal reading window. The 10 min integration used in this example was chosen to highlight the dynamic range of bioluminescent production across all treatment conditions, however a shorter reading frame can be applied depending on the application. Similarly, while a 24-well plate is used for demonstration in this example, 96- or 384-well plates can be substituted for higher throughput applications. Although the representative results shown here demonstrate technical triplicates on a single plate, it is important to note that independent assays on different plates should be performed to establish statistical significance between treatment levels when testing a compound of interest. Moreover, because this assay can be adapted for use in a variety of instruments with varying detection sensitivities, it is recommended that acceptable signal-to-noise and signal-to-background ratios should be determined on a per-instrument basis.

It was previously determined that the minimal detectable cell number in a 24-well plate was approximately 1.5 x 104 cells under the imaging conditions described here15. However, it is important to note that the minimal number of cells required for reliable detection varies with well size, and that the use of smaller wells reduces the number of cells required for detection by increasing the number of bioluminescent cells per unit area. Therefore, it is strongly recommended that the relationship between bioluminescent output and population size be determined under the desired imaging conditions prior to screening. In addition, a photomultiplier tube-based plate reader can also be used for data acquisition in place of the IVIS Lumina imaging system, but at the detriment of obtaining pseudocolor images. Regardless of the imaging instrument employed, an opaque plate should be used to minimize signal loss and/or bioluminescent contamination of adjacent wells due to photons traversing the plate.

Compared to other commonly employed cell culture-based approaches, this method offers the advantage that data acquisition can be performed in a fully automated fashion since the need for sample destruction or substrate addition is eliminated. It also allows for the continuous tracking of dynamic effects upon the same cell population over a prolonged period of exposure, which provides an enhanced resolution of toxicological kinetics without the concurrent increase in monetary or time costs that is necessitated when using cell lysis-requiring methods (Table 1). However, an important limitation of this method is that cell type-specific testing will require the stable transfection of the lux cassette into each cell type of interest in order to generate an autobioluminescent phenotype for screening. Although this need only be performed once since the cells can subsequently be stored in liquid nitrogen for future use, the transfection procedure is a potentially time-consuming endeavor.

Despite this prerequisite, the protocol outlined here is simple and inexpensive, requires minimal hands-on work from laboratory personnel, does not require any additional reagents, and generates data that can be directly used for toxicological interpretation. For these reasons, we conclude that autobioluminescent mammalian cell lines can be used as a high-throughput assay for rapid preliminary screening of a large number of candidates to select compounds that require more detailed downstream evaluation. 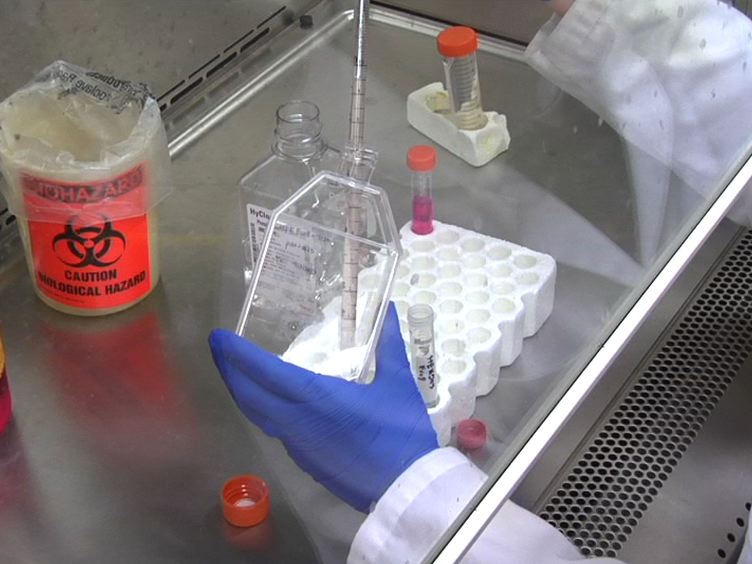