A short clinical examination protocol is presented to aid in the detection of classical and atypical scrapie in sheep and goats.

The diagnosis of scrapie, a transmissible spongiform encephalopathy (TSEs) of sheep and goats, is currently based on the detection of disease-associated prion protein by post mortem tests. Unless a random sample of the sheep or goat population is actively monitored for scrapie, identification of scrapie cases relies on the reporting of clinical suspects, which is dependent on the individual's familiarization with the disease and ability to recognize clinical signs associated with scrapie. Scrapie may not be considered in the differential diagnosis of neurological diseases in small ruminants, particularly in countries with low scrapie prevalence, or not recognized if it presents as nonpruritic form like atypical scrapie. To aid in the identification of clinical suspects, a short examination protocol is presented to assess the display of specific clinical signs associated with pruritic and nonpruritic forms of TSEs in sheep, which could also be applied to goats. This includes assessment of behavior, vision (by testing of the menace response), pruritus (by testing the response to scratching), and movement (with and without blindfolding). This may lead to a more detailed neurologic examination of reporting animals as scrapie suspects. It could also be used in experimental TSE studies of sheep or goats to evaluate disease progression or to identify clinical end-point.

Scrapie is a transmissible spongiform encephalopathy (TSE) of sheep and goats, which belongs to the group of protein misfolding disorders, like bovine spongiform encephalopathy (BSE) in cattle, chronic wasting disease in deer, and Creutzfeldt-Jakob disease in humans. The diagnosis is made post mortem by detecting the abnormal form of the prion protein, which is proteinase-resistant, usually in the brain. Two major naturally occurring scrapie forms can be distinguished, which are epidemiologically, pathologically, and biochemically different: classical scrapie and atypical scrapie. In addition, a neurological disease with classical scrapie-like clinical signs can be induced in sheep and goats by experimental infection with the BSE agent6,10-11. In fact, naturally occurring BSE has been diagnosed in goats3,17. Control of classical scrapie (and BSE in sheep if it occurred naturally) has been achieved by breeding for genetic resistance targeting the prion protein gene, but this is more difficult for atypical scrapie, which is believed to be a sporadic disease and has been diagnosed in countries considered to be free from classical scrapie, e.g. New Zealand7.

Scrapie is a neurologic disease of adult sheep and goats resulting in changes in behavior, sensation, and movement, but the disease is slowly progressive, and clinical signs are often not recognized because the animal keeper or veterinary surgeon may not be familiar with the clinical signs, or scrapie is not considered at all in the differential diagnosis of neurologic diseases in small ruminants.

The proposed examination protocol was designed to aid in the clinical diagnosis of scrapie with two purposes in mind: it should be considerably brief to allow scanning of many animals within a short period of time but specific enough to allow detection of scrapie-affected animals, which is achieved by assessing the presence of clinical signs frequently encountered in scrapie-affected animals. This protocol is a slight modification from the one used to monitor goats for signs of classical scrapie11 and includes blindfolding of the animal, which may exacerbate clinical signs not normally associated with scrapie9.

4. Testing of the Scratch Response

8. Assessment of the Animal’s Movement

Clinically healthy sheep. Poll Dorset wether from a scrapie-free flock intracerebrally inoculated with bovine brain of New Zealand origin and examined at 49 months post inoculation. This sheep has a normal posture, behaves normally, displays a normal menace response (Figure 1), does not react to the scratch test, has an intact fleece, and a very good body condition. It is clinically unremarkable when blindfolded and shows no signs of a movement disorder.

Atypical scrapie sheep presenting with the nonpruritic form of TSEs in sheep. Cheviot wether from a scrapie-free flock intracerebrally inoculated with brain homogenate from an atypical scrapie field case of the same prion protein genotype (AHQ/AHQ) and examined at 36 months post inoculation. This sheep also has a normal posture but behaves differently to the other sheep in the pen and circles in clockwise direction. It does not blink when the menace response is tested. Scratching does not elicit any response, and no fleece changes are apparent, but the body condition is only fair. It circles clockwise when blindfolded (Figure 2) and loses balance. The gait is ataxic, and a fine head tremor is visible.

Atypical BSE sheep presenting with the pruritic form of TSEs in sheep, which is clinically similar to the clinical presentation of classical scrapie-affected sheep. For this reason, a classical scrapie case is not included. Poll Dorset wether from a scrapie-free flock intracerebrally inoculated with bovine atypical (L-type) BSE brain homogenate and examined at 50 months post inoculation. This sheep stands slightly hunched, tends to keep the hind limbs wide-based and falls on the floor when caught. The menace response is weak. Scratching of various areas of the back elicits head or lip movements (Figure 3), and there is wool loss with minor skin trauma on the poll. The body condition is good. When blindfolded, it is reluctant to move and rests its rear end on the hurdle to maintain balance. The sheep is ataxic and displays fore limb hypermetria. 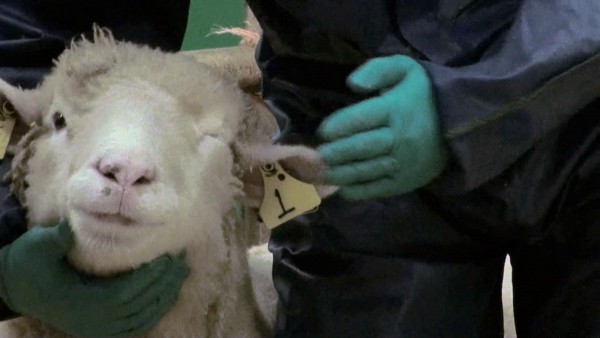 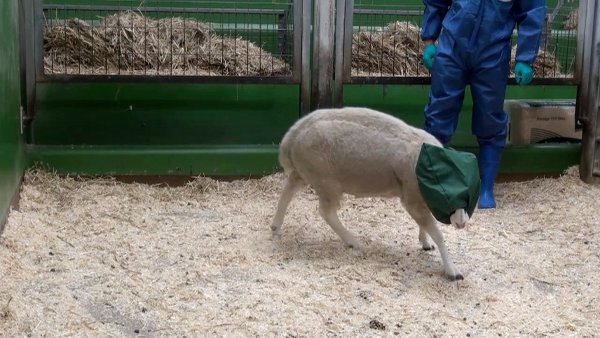 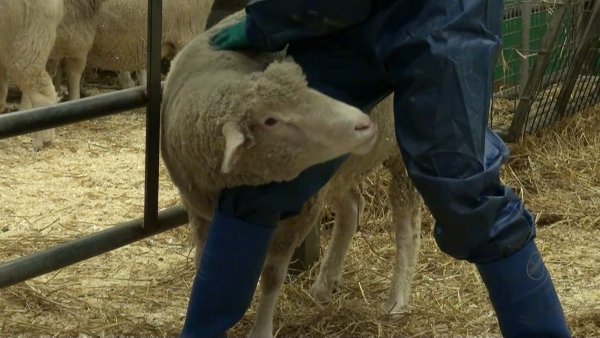 Figure 3. Testing of the scratch response. Scratching of the back elicits lip licking with sideward movements of the head Click here to view larger image.

Scrapie is a listed disease by the World Health Organization for Animal Health (OIE), which, in the absence of a quick and reliable ante mortem test, relies on the farmers’ or veterinarians’ ability to recognize the clinical signs associated with this disease. Most scrapie cases, particularly atypical scrapie cases, however, are currently found by targeted TSE surveillance, i.e. by brain examination of small ruminants subject to slaughter or fallen stock animals. Breeding sheep for resistance to classical scrapie, which reduced the number of classical scrapie cases, most likely also reduced people’s awareness for the disease so that it is less often considered in the differential diagnosis of neurologic disorders in sheep. Atypical scrapie also has a low prevalence with approximately five cases in abattoirs and eight cases in fallen stock per 10,000 tested in Europe4. In addition, pruritus, usually evident as alopecia with or without excoriation, is often considered a characteristic sign of scrapie13. Thus, a neurologic disease without concomitant pruritus as observed in atypical scrapie12 or the nonpruritic form of caprine scrapie11 may not raise suspicion of scrapie.

This examination protocol was designed to identify clinical signs of TSE in sheep by evaluating specific clinical signs associated with various types of scrapie (atypical and classical scrapie, the latter represented by an atypical BSE-inoculated sheep, which presented with classical scrapie-like signs). In classical scrapie, the percentage of cases that displayed a positive scratch response (“nibble reflex”) ranged from 50-77 in over 100 sheep studied5,8. Movement disorders can be observed in up to 81% of classical scrapie cases based on various studies18. Incoordination is also a major sign in various naturally occurring cases of atypical scrapie, often accompanied by behavioral changes1, but additional signs reported in both naturally and experimentally infected atypical scrapie sheep were circling and visual impairment12,15,16, which is why blindfolding and the testing of the menace response is included in the examination protocol. Scoring the body condition, for example using a 6 point scoring system14, enables evaluation of emaciation, which may be observed in scrapie-affected sheep5. Although clinical criteria to aid in the detection of scrapie in sheep have been proposed previously2, these only related to the detection of classical scrapie and took the clinical history into account, which may not be available if animals are presented at an abattoir.

The current protocol allows screening of many animals for signs of scrapie within a short period of time. Furthermore, the examination protocol can be applied to experimental studies of scrapie in sheep and goats to monitor clinical onset, progression, and end-point. However, it does not replace a more detailed physical and neurologic examination with appropriate recording of the clinical case history, possibly followed by ancillary diagnostic tests (examination of blood and cerebrospinal fluid; more sophisticated imaging techniques if appropriate), which may be necessary subsequently to rule out various other conditions in small ruminants that present with similar signs, such as metabolic or inflammatory neurological diseases, brain abscesses, or tumors.

Although a clinical examination is generally less sensitive in detecting TSE-affected animals than post mortem tests based on detection of prion protein2,11, particularly in an early stage of the incubation period, this is currently the only detection method in live animals and most relevant to those countries that do not have a targeted surveillance system in place to identify TSE-affected small ruminants.

All procedures involving animals were carried out in accordance with the Animal (Scientific Procedures) Act 1986, under license from the UK Government Home Office.
The authors declare that they have no competing financial interests.

The studies providing the animals were funded by the UK Department for Food, Environment and Rural Affairs and the European Union (through funding of the EU TSE Reference Laboratory). We acknowledge the support of the project managers, Dr. M. Simmons and Dr. M. Jeffrey. 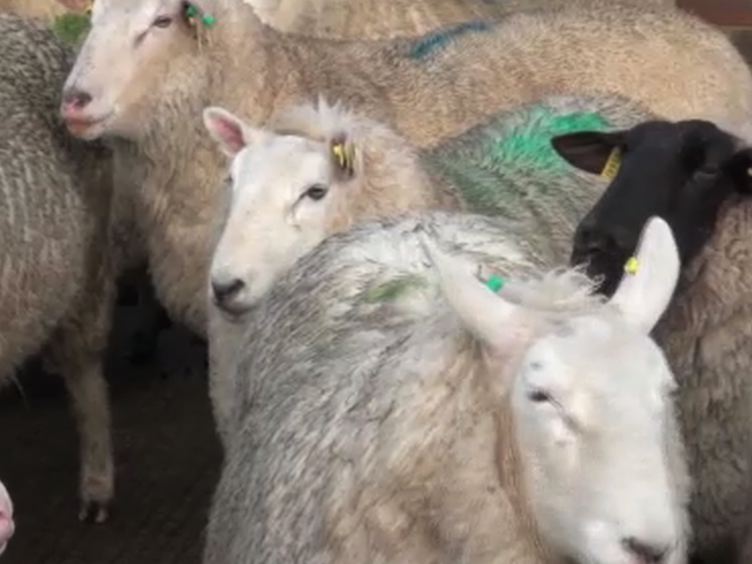