Batrachochytrium dendrobatidis infection in amphibians can be eliminated using a reduced concentration (0.0025%) and shorter duration (five minute baths for six days) of itraconazole than is generally used. Less mortality and fewer negative side effects were observed using this modified treatment protocol.

Amphibians are experiencing the greatest decline of any vertebrate class and a leading cause of these declines is a fungal pathogen, Batrachochytrium dendrobatidis (Bd), which causes the disease chytridiomycosis. Captive assurance colonies are important worldwide for threatened amphibian species and may be the only lifeline for those in critical threat of extinction. Maintaining disease free colonies is a priority of captive managers, yet safe and effective treatments for all species and across life stages have not been identified. The most widely used chemotherapeutic treatment is itraconazole, although the dosage commonly used can be harmful to some individuals and species. We performed a clinical treatment trial to assess whether a lower and safer but effective dose of itraconazole could be found to cure Bd infections. We found that by reducing the treatment concentration from 0.01-0.0025% and reducing the treatment duration from 11-6 days of 5 min baths, frogs could be cured of Bd infection with fewer side effects and less treatment-associated mortality.

Amphibians are currently experiencing the greatest decline in biodiversity of all vertebrate taxa1. Chytridiomycosis, a skin disease caused by the chytrid fungal pathogen Batrachochytrium dendrobatidis (Bd), is one of the major causes of these dramatic declines2. Bd is the worst pathogen on record for causing biodiversity loss: it infects over 600 species of amphibians and has caused declines in over 300 species, of which as many as 200 species have become critically endangered or extinct2,3. The amphibian chytrid fungus is not host specific and it is unclear what qualities of the host allow for Bd infection to progress causing severe disease. Chytridiomycosis causes death by disrupting ion channels in the skin, resulting in electrolyte loss and heart failure4. Also, Bd supernatant (containing no Bd zoospores) causes an immune response in tadpoles5 leading researchers to believe Bd produces a toxic by-product6.

Because many species are rapidly declining, captive assurance colonies and breeding programs are important conservation measures, and may be the only lifeline for some species. Establishing and maintaining disease free colonies is a challenge for amphibian management facilities. The current chemotherapeutic methods for treating Bd infections, although effective, can be harmful to the animals being treated, and no single treatment method has been successful across species and age classes of amphibians7.

Few clinical trials of treatments for Bd infection have been performed7. The three most commonly used methods of treatment are heat therapy, chloramphenicol and itraconazole. Heat therapy is a nonchemotherapeutic treatment option that appears to have few side effects, can be used on multiple life stages, and is generally effective. In a treatment trial, Chatfield and Richards-Zawacki8 found that 96% of the treated animals had cleared infections after being housed at 30 °C for 10 days. Although this trial was not 100% successful, it provides a baseline for others to assess heat therapy for their own species. Heat therapy, although effective for many species, is impractical for many alpine species that cannot remain at high temperatures for an extended period of time. Chloramphenicol, an antibacterial, has been used successfully to treat Bd in many species, and inhibits fungal growth in vitro. As an antibacterial, the chloramphenicol does not attack the fungus specifically but has been known to cause apoptosis in eukaryotic cells9. It has been speculated that chloramphenicol therapy causes apoptosis in the skin, killing intracellular sporangia, although the exact mechanism of action is unknown. Although no clinical trial has been conducted, and therefore dose and treatment time have not been assessed, current treatment protocols typically require submersion for two to four weeks10,11, making this treatment impractical for terrestrial amphibians. Chloramphenicol has also been restricted in some countries for veterinary use because human exposure has been associated with a rare form of aplastic anemia12.

Itraconazole, an azole antifungal, is the most widely used for treatment of Bd infection in amphibians in captivity. The most widely used protocol is bathing animals in a 0.01% itraconazole solution for five minutes a day for 11 consecutive days. This protocol was derived from standards used for mammalian administration, and, while effective for amphibians, it is not based on clinical trials in amphibians11,13. This protocol can cause negative side effects in certain species, especially in the genus Rana and in tadpoles and recent metamorphs11. Tadpole treatment has been successful using a much lower concentration (0.0005%) of itraconazole, but was associated with depigmentation14. This same concentration was trialed on recent metamorphs and found to be unsuccessful at treating infection15. Because there is risk of negative side effects with itraconazole treatment, some practitioners have used one half the usual concentration (0.005%) for 11 consecutive days and found this to be successful in curing Bd infections16.

The present study is a summary of a clinical treatment trial using itraconazole to treat Bd infection15. The protocol describes an attempt to find the lowest dose and treatment time that is both safe and effective for treating Bd infected animals with itraconazole. Animals used in this study were recent metamorphs of gulf coast toads, Incilius nebulifer.

Ethics Approval: This study and its methods were approved by Tulane University's Animal Use and Care Committee (protocol no. 0407).

4. Bd as a Biohazard

Treatment of Incilius nebulifer (n = 15) was successful using baths in 0.0025% itraconazole concentration for five-minutes a day for six days. This low concentration dosage of itraconazole treatment did not differ significantly in mortality when compared to the Bd-positive controls (Cox regression: χ2,1 = 2.17, exp(b) = 20,500, p = 0.339) (Figure 1B), many of whom survived until the end of the trial with Bd infection. 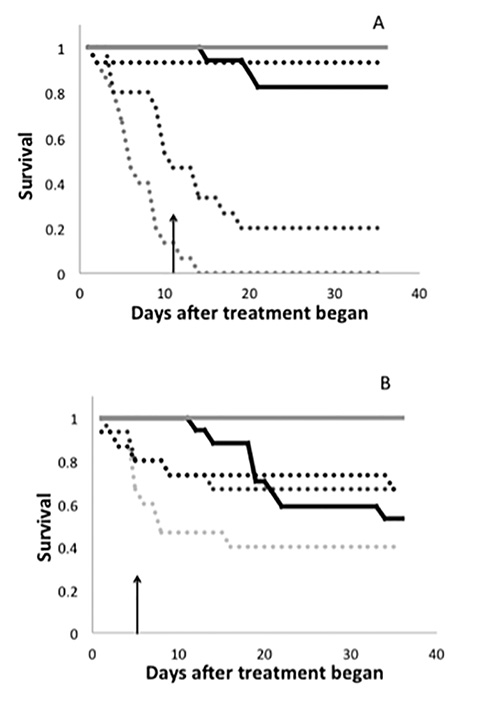 The cause of death resulting from itraconazole treatment is unknown at this point11.  Necropsy and histopathology were conducted on a small subset of individuals that died during or shortly after the treatment period in the Brannelly et al.15 study. Results of these analyses were inconclusive as to the cause of death, although it is clear that no animal died of chytridiomycosis. Moderate autolysis occurred between death and specimen preservation, which may have affected our ability to detect subtle differences between treatment groups.

Azole antifungals represent one type of antifungal chemotherapy that inhibit fungal growth13. There are other treatment methods that aim to kill the fungal pathogen rather than just reduce growth. Bd is killed in vitro at temperatures above 28 °C and heat therapy aims to kill Bd in the epidermis. Terbinafine hydrochloride, an alternative antifungal that has been successful at treating Bd infection in some species19, works by causing lysis of the fungal cells. Antifungals that directly attack the pathogen could be more successful treatments, and more work needs to be done to test promising treatment options for Bd infection.

Itraconazole treatment has been shown to be effective in subclinically infected animals, but treatment of clinical chytridiomycosis has largely been unsuccessful. Only one study to date20 has successfully treated terminally ill amphibians, and the treatment involved an aggressive combination of electrolyte therapy and chemotherapy. Successful treatment options for terminally ill animals are needed, especially for critically endangered animals in captive colonies where protection of every individual is essential for conservation of the species.

Although reducing the dose and treatment time was successful for I. nebulifer, the treatment has not been trialed on other species or animals with clinical infections. Some species and life stages are intolerant of itraconazole treatment, so before applying a large-scale treatment regime, captive managers should trial treatment on a small subset of individuals to determine safety and effectiveness. Testing the treated animals for at least four weeks after the completion of treatment is necessary to ensure eradication of low level infection7, and should be implemented after every treatment regimen.

Establishing safe and effective treatment options for Bd infections in captive assurance colonies area priority for amphibian conservation efforts. Maintaining Bd free colonies is essential to the success of conservation efforts and captive colonies may be the only lifeline for species on the brink of extinction.

I would like to thank C.L. Richards-Zawacki for help conceptualizing the experimental design and assisting with materials, A. Pessier for help establishing a treatment regimen and necropsy analyses, M.W.H. Chatfield, M.J. Robak, K. Tasker and D. Lenger for help in the laboratory and support and M. McFadden and P. Harlow at the Taronga Zoo for use of their space during filming. The project was partially funded by Louisiana Department of Wildlife and Fisheries through the Louisiana Environmental Education Commission grant awarded to L.A. Brannelly and by Life Technologies. 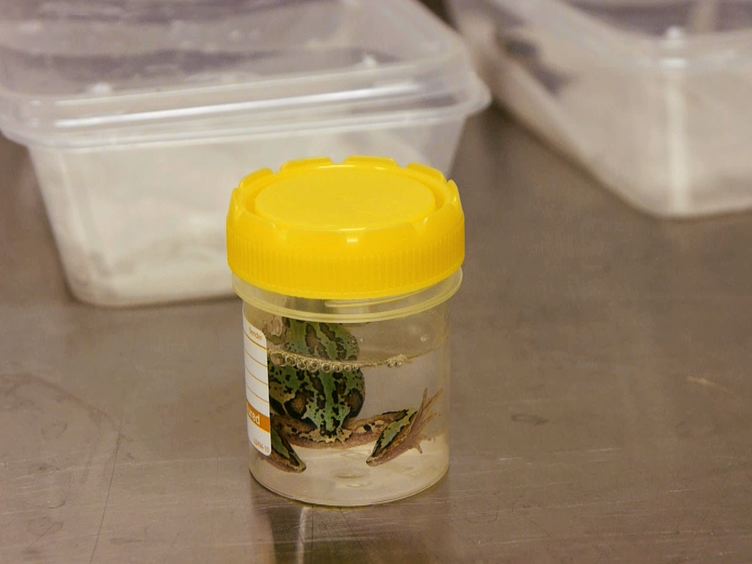