The preparation and exfoliation of CaCuSi4O10 and BaCuSi4O10 are described. Upon stirring in hot water, CaCuSi4O10 spontaneously exfoliates into monolayers, whereas BaCuSi4O10 requires ultrasonication in organic solvents. Near infrared (NIR) imaging illustrates the NIR emission properties of these materials, and aqueous dispersions of these nanomaterials are useful for solution processing.

In a visualized example of the ancient past connecting with modern times, we describe the preparation and exfoliation of CaCuSi4O10 and BaCuSi4O10, the colored components of the historic Egyptian blue and Han blue pigments. The bulk forms of these materials are synthesized by both melt flux and solid-state routes, which provide some control over the crystallite size of the product. The melt flux process is time intensive, but it produces relatively large crystals at lower reaction temperatures. In comparison, the solid-state method is quicker yet requires higher reaction temperatures and yields smaller crystallites. Upon stirring in hot water, CaCuSi4O10 spontaneously exfoliates into monolayer nanosheets, which are characterized by TEM and PXRD. BaCuSi4O10 on the other hand requires ultrasonication in organic solvents to achieve exfoliation. Near infrared imaging illustrates that both the bulk and nanosheet forms of CaCuSi4O10 and BaCuSi4O10 are strong near infrared emitters. Aqueous CaCuSi4O10 and BaCuSi4O10 nanosheet dispersions are useful because they provide a new way to handle, characterize, and process these materials in colloidal form.

Vibrant colors were prized throughout the ancient world. Even today, we can still see the remains of pigments and dyes created by every major culture. Remarkably, two of the most famous synthetic blue pigments share a similar chemical composition and structure, despite having been developed at widely different times and places. The colored components of both Egyptian blue, CaCuSi4O10, and Han blue, BaCuSi4O10, belong to the alkali earth copper tetrasilicate series, ACuSi4O10 (A = Ca, Sr, Ba)1, as well as the larger gillespite group, ABSi4O10 (B = Fe, Cu, Cr)2,3.

Beyond traditional pigment applications, current scientific interest in these materials centers on their strong near infrared (NIR) emission properties. This emission originates from the Cu2+ in square planar coordination; these ions are linked by tetrahedral silicate moieties within the three-dimensional crystal structure, and the resulting layers alternate with alkali earth ions4-6. Recent technical highlights include NIR imaging to identify Egyptian and Han blue pigments on cultural heritage artifacts7,8, lanthanide doping of ACuSi4O10 to enhance NIR reflectance properties and open new energy transfer pathways9,10, the use of ACuSi4O10 as the active material for optical sensors11, and the exfoliation of CaCuSi4O10 into monolayer nanosheets12.

In particular, this last example provides a way to nanostructure CaCuSi4O10 so that it can be handled as a colloidal dispersion rather than as a particulate solid12. Because colloidal dispersions are compatible with solution-processing techniques (e.g. spin coating, ink jet printing, layer-by-layer deposition), this advance opens new application areas that range from security inks to biomedical imaging. The experimental protocols illustrated in this contribution will enable researchers from diverse backgrounds to prepare, characterize, and use CaCuSi4O10 and BaCuSi4O10 nanosheets in their work.

The textures of all of the prepared materials, as well as differences in the intensity of their blue color due to varying crystallite sizes, are visible by low magnification optical microscopy (Figures 3a-h). Scanning electron microscopy (SEM) images confirm that the solid-state method of synthesizing CaCuSi4O10 produces ~1-15 µm primary crystallites (Figure 4b) whereas melt flux conditions lead to ~5-50 µm crystallites (Figure 4a). Powder X-ray diffraction (PXRD) patterns for CaCuSi4O10 (Figures 5a and 5c) and BaCuSi4O10 (Figures 6a and 6c) showcase the composition and phase purity of these products.

Representative transmission electron microscopy (TEM) images show the nanosheet morphology of the exfoliated products (Figure 7). In addition, NIR photographic imaging shows the strong luminescence of both the bulk and exfoliated materials (Figure 8). A simple way to illustrate the solution processability of CaCuSi4O10 nanosheets is to prepare an aqueous ink (Figure 9) suitable for painting (Figure 10). 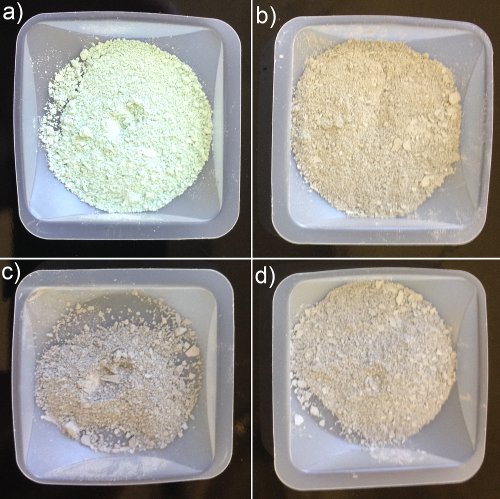 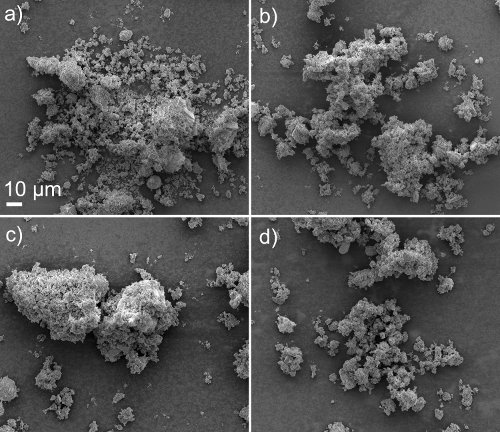 Figure 4. Scanning Electron Microscopy. Images of bulk CaCuSi4O10 made by melt flux (a) and solid state (b) methods. Samples were coated with gold prior to imaging. Please click here to view a larger version of this figure. 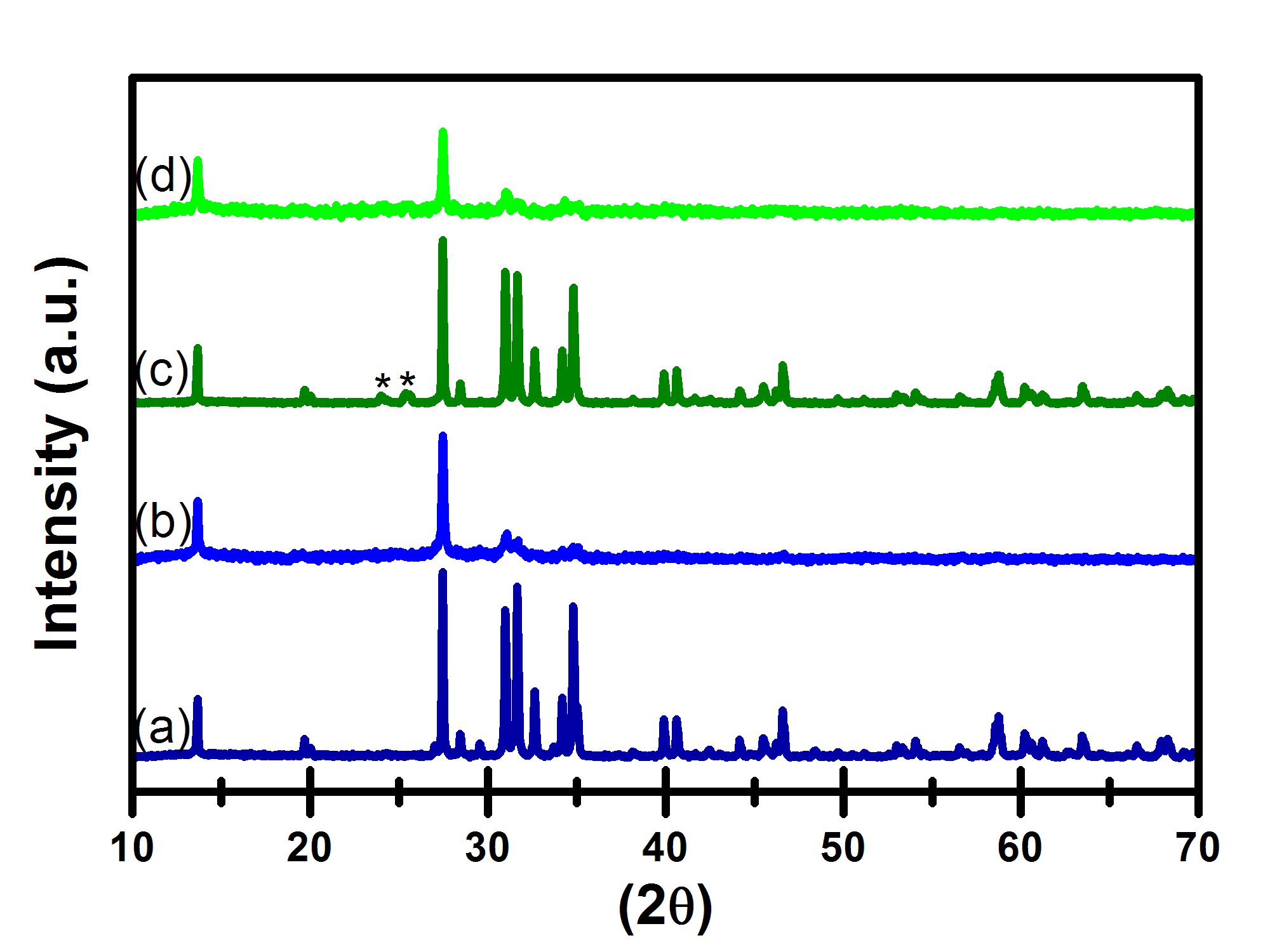 Figure 5. Powder X-Ray Diffraction: CaCuSi4O10. Patterns for bulk CaCuSi4O10 prepared by melt flux (a) and solid state (c) methods. Asterisks denote a silica impurity. Patterns for exfoliated CaCuSi4O10, (b) and (d), prepared from (a) and (c), respectively. Please click here to view a larger version of this figure. 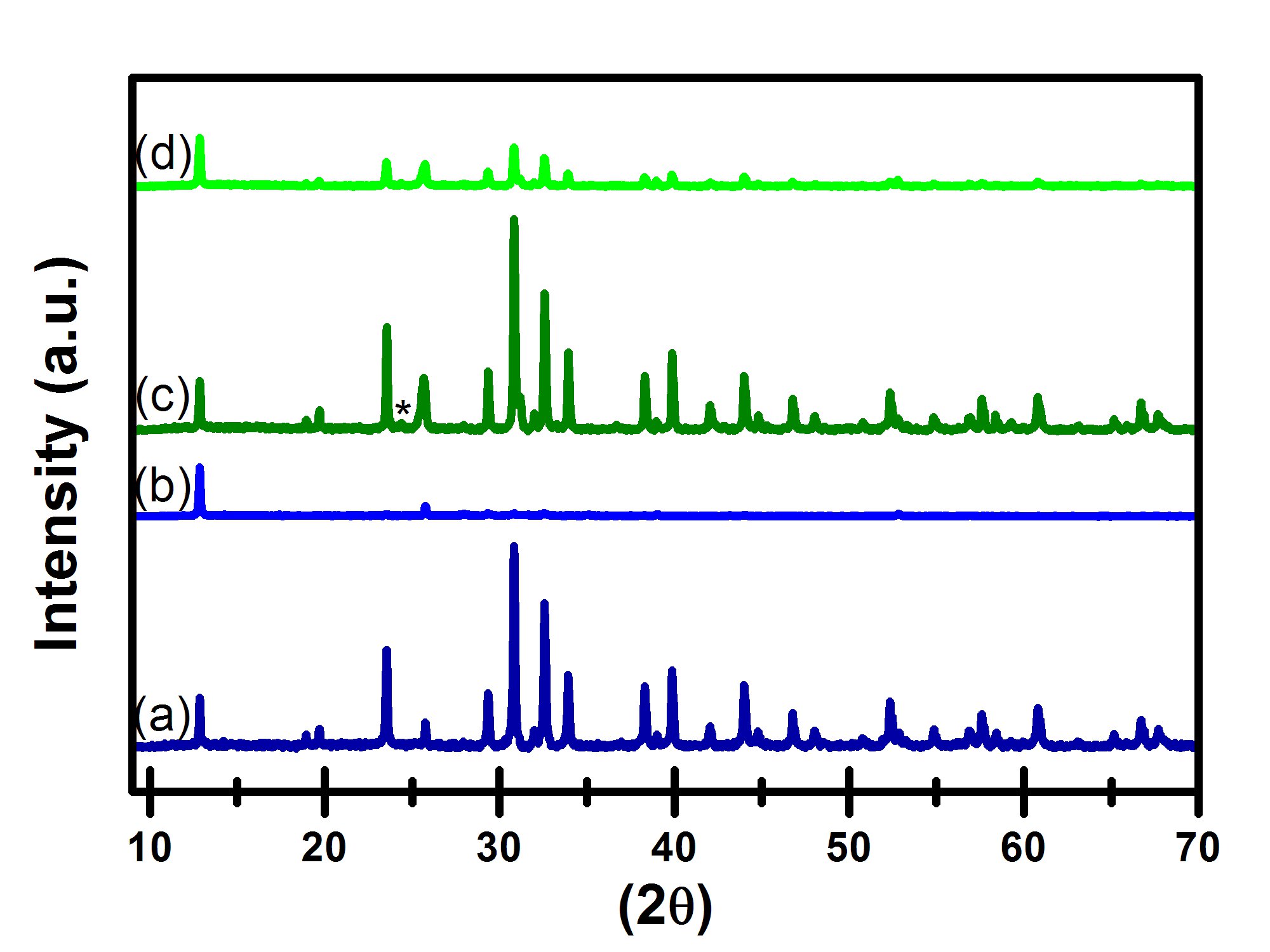 Figure 6. Powder X-Ray Diffraction: BaCuSi4O10. Patterns for bulk BaCuSi4O10 prepared by melt flux (a) and solid state (c) methods. Asterisk denotes a silica impurity. Patterns for exfoliated BaCuSi4O10, (b) and (d), prepared from (a) and (c), respectively. Please click here to view a larger version of this figure.

Figure 7. Transmission Electron Microscopy. Representative images of exfoliated CaCuSi4O10 derived from bulk CaCuSi4O10 made by melt flux (a) or solid state (b) methods. Representative images of exfoliated BaCuSi4O10 derived from bulk BaCuSi4O10 made by melt flux (c) or solid state (d) methods. Please click here to view a larger version of this figure. 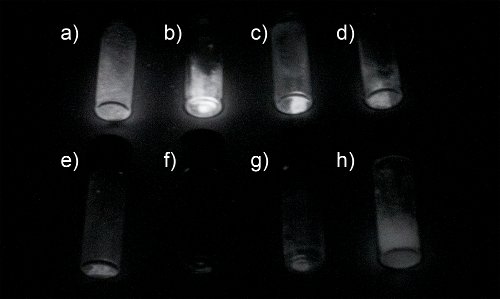 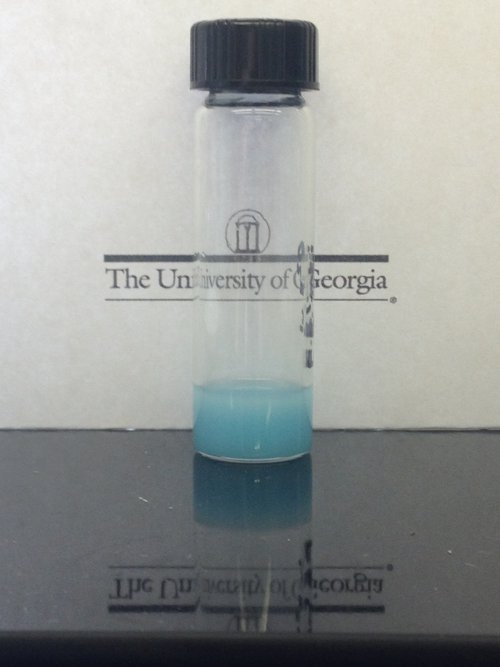 Figure 9. Photograph of a CaCuSi4O10 nanosheet ink in a vial. 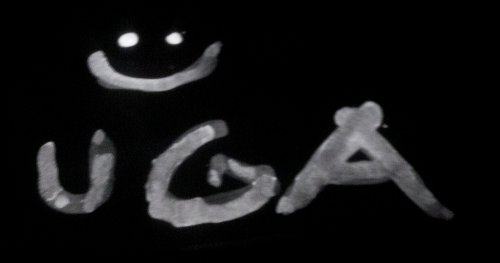 Figure 10. Near Infrared Imaging. A rudimentary painting with the CaCuSi4O10 nanosheet ink that illustrates both its simple application and its luminescence properties.

The preparation of Egyptian blue pigment, a mixture of mostly CaCuSi4O10 and SiO2, is a well-studied process4,13-21. The numerous reported procedures may be categorized as either melt flux or solid-state reactions. Two major advantages of the melt flux approach are that it permits lower reaction temperatures (<900 °C) and allows CaCuSi4O10 crystals to nucleate and grow from a molten glass phase20. The flux component is typically an alkali salt (e.g. Na2CO3) or borate compound (e.g. borax). In comparison, the solid-state syntheses omit the flux but require higher temperatures (~1,000 °C) for the reaction between Ca, CuO, and SiO2 sources to reach completion.

Although the synthesis of Han blue pigment is not as well studied as that of Egyptian blue4,22-25, the preparation of BaCuSi4O10 follows similar melt flux and solid-state routes with two differences: (1) a PbO flux should be used, and (2) the reaction temperatures must be more closely controlled because of alternative Ba-Cu-Si-O phases that can form (e.g. BaCuSi2O6).

These points are illustrated by the detailed procedures and results described in this paper. First, for all methods, the starting materials should be ground to a smooth powder (Figures 1a-d) consisting of 5-20 µm particles (characterized by SEM; Figures 2a-d). Next, the use of a significant amount of flux (12.5% by weight) in the preparation of CaCuSi4O10 and BaCuSi4O10 leads to highly crystalline products, which are characterized by intense blue coloration (Figures 3a and 3c), relatively large particle sizes (Figure 4a), and strong PXRD patterns (Figures 5a and 6a). The diminished isolated yields (~70%) from these preparations are caused by adhesion of the melted reaction mixtures to the crucible. In comparison, CaCuSi4O10 and BaCuSi4O10 prepared by the solid-state route exhibit less intense coloration (Figures 3b and 3d) and smaller particle sizes (Figure 4b). As synthesized, these products are powders that can be isolated in near-quantitative yields. Thus, for both CaCuSi4O10 and BaCuSi4O10, the advantages of flux and the importance of reaction temperature cannot be overstated.

Remarkably, the exfoliation of CaCuSi4O10 and BaCuSi4O10 occurs under simple aqueous conditions. In the case of CaCuSi4O10, this reaction is quite slow at room temperature (≥6 weeks to see any appreciable exfoliation), but it becomes synthetically useful at 80 °C (substantial exfoliation after 2 weeks). In comparison, the exfoliation of BaCuSi4O10 is sluggish even at 80 °C, and so we apply an even greater energy input in the form of ultrasonication. These reactions are highly reliable with two caveats. For CaCuSi4O10, it is important to use a glass-coated stir bar; if a standard PTFE-coated stir bar is used, we find that PTFE byproducts contaminate the CaCuSi4O10 nanosheet product. For BaCuSi4O10, it is important to control the ultrasonication power and time so that the reaction is stopped before the nanosheets become degraded.

Transmission electron microscopy (TEM) of the nanosheet products shows that these very thin materials have lateral dimensions ranging from hundreds of nanometers to several microns. In general these lateral dimensions correlate with the crystallite size of the three-dimensional starting material. In prior work, atomic force microscopy provided topographic mapping that demonstrated the single-layer thicknesses (~1.2 nm) of these nanosheets12. Photographs of powder CaCuSi4O10 and BaCuSi4O10 nanosheet samples (Figures 3e-h) show that their color is less intense than that of the starting materials, a direct result of nanostructuring.

Additional information is provided by PXRD (Figures 5 and 6), which reveals basal cleavage along the (001) plane and preferred orientation along the {00l} series for all nanosheet samples. These features reflect the stacked alignment of these highly anisotropic nanomaterials when drop-cast onto a substrate. Furthermore, the characteristic NIR emission of CaCuSi4O10 at ~910 nm and BaCuSi4O10 at ~950 nm is illustrated in a NIR photograph of all eight samples (Figure 8).

The solution processing of CaCuSi4O10 can be accomplished by simply preparing a colloidal dispersion of CaCuSi4O10 nanosheets (Figure 9) to use as an ink. This ink then can be applied to a substrate via spin coating, spray coating, ink jet printing12, or simply brushing (Figure 10). Importantly, the NIR emission properties of CaCuSi4O10 are retained at all stages of this process. These new possibilities highlight the contrast between CaCuSi4O10 nanosheets and the traditional use of Egyptian blue pigment, a highly granular material that is challenging to incorporate into a smooth paint.

The authors have no competing financial interests. 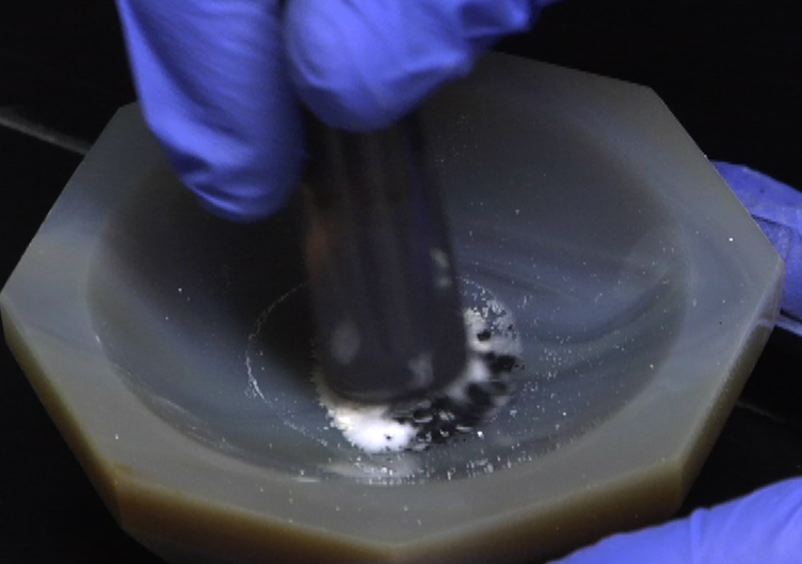