High thoracic or cervical spinal cord injury (SCI) can lead to cardiovascular dysfunction. To monitor cardiovascular parameters, we implanted a catheter connected to a radio transmitter into the femoral artery of rats that underwent a T4 spinal cord transection with or without grafting of embryonic brainstem-derived neural stem cells expressing green fluorescent protein. Compared to other methods such as cannula insertion or tail-cuff, telemetry is advantageous to continuously monitor blood pressure and heart rate in freely moving animals. It is also capable of long term multiple data acquisitions. In spinal cord injured rats, basal cardiovascular data under unrestrained condition and autonomic dysreflexia in response to colorectal distension were successfully recorded. In addition, cardiovascular parameters before and after SCI can be compared in the same rat if a transmitter is implanted before a spinal cord transection. One limitation of the described telemetry procedure is that implantation in the femoral artery may influence the blood supply to the ipsilateral hindlimb.

Cardiovascular dysfunction occurs after spinal cord injury (SCI) at high levels. It is manifested in disordered blood pressure and heart rate at rest, orthostatic hypotension, exercise-induced hypotension, and autonomic dysreflexia characterized by episodes of hypertension and baroreflex-mediated bradycardia in response to sensory stimuli below the injury level1,2. These symptoms interfere with the daily living of spinal cord injured patients. Thus, it is important to establish effective tools for the investigation of cardiovascular changes in animals with SCI and experimental treatments.

To investigate cardiovascular function in animals, several techniques have been used to monitor blood pressure and heart rate. Central cardiovascular parameters can be recorded by cannula insertion and telemetry, whereas noninvasive tail-cuffs can be employed to measure peripheral blood pressure3. Compared to other methods, telemetry has the main advantage that it allows for continuous recording in freely moving animals and long-term monitoring of cardiovascular function4. In SCI animal models, the changes in peripheral blood pressure after experimental stimulation may not be large enough to be detected. Accordingly, suitable cardiac monitoring technique should be selected for animals with SCI.

All animal protocols were approved by the Institutional Animal Care and Use Committee (IACUC). NIH guidelines for laboratory animal care and safety are strictly followed. Animals with surgical procedures were adequately treated for minimizing pain and discomfort.

Using the above described telemetry technique, we successfully recorded cardiovascular parameters in spinal cord injured animals. In animals with SCI alone, MAP was significantly reduced whereas HR increased compared to naïve animals, consistent with previous reports9. In animals with BS-NSC grafting, MAP and HR approached levels measured in naïve animals (Figure 2). During colorectal distension, a rat was regarded as dysreflexic if the noxious stimulation produced a rise in MAP and a decrease in HR3,8. Episodic hypertension and baroreflex-mediated bradycardia were inevitably triggered in all animals but the extent differed between groups. MAP increase in animals grafted with BS-NSCs was much lower (16.9 ± 3.1 mmHg, n = 3) than animals with injury alone (64.1 ± 1.6 mmHg, n = 3) (Figure 3). However, the decrease in HR during colorectal distension did not significantly differ between groups. As bradycardia is mediated by baroreflex mechanisms, this discrepancy may be due to reduced sensitivity of baroreceptors after SCI10. Spasm occurred during colorectal distension in most rats regardless of the treatment.

Upon histological analysis, immunolabeling indicated excellent graft survival in spinal cords implanted with BS-NSCs but a gap in the spinal cord of injured control animals without graft. Fetal NSCs completely filled the lesion site and only minor cavities were observed. Implants integrated into the host gray and white matter both rostrally and caudally. A large number of TH+ catecholaminergic and 5-HT+ serotonergic neurons were found within BS-NSC implants, and numerous axons topographically innervated caudal sympathetic preganglionic neurons in the intermediolateral cell column over long distances (Figure 4). In contrast, in injured animals without graft, TH+/5-HT+ fibers were not detected in thoracolumbar spinal cord below the lesion (not shown). 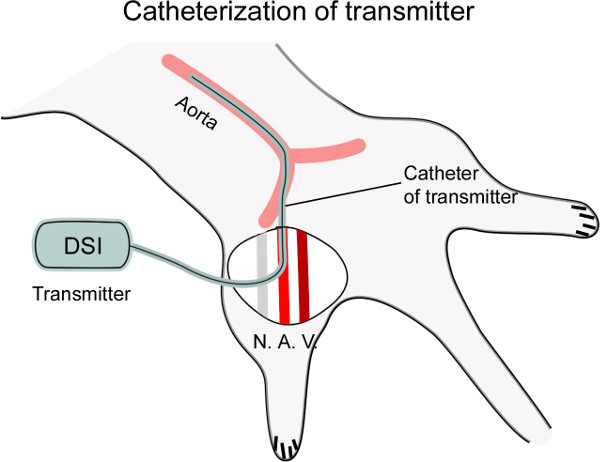 Figure 1: Diagram showing catheterization of the femoral artery. The femoral artery (A.) is dissected from the nerve (N.) and vein (V.), and then punctured with a curved needle. The catheter connected to the transmitter is inserted into the artery, placing the tip of catheter at the level of the thoracic aorta for cardiovascular recording (~4 cm).

Figure 3: Colorectal distension (CRD)-induced autonomic dysreflexic. Autonomic dysreflexia is triggered during a 1 min CRD in both SCI and BS-NSC grafted animals, manifested as episodic hypertension accompanied by bradycardia. (A) In an injured control rat, MAP increases by approximately 60 mmHg during colon distension. (B) However, the increase of MAP is strongly reduced to 10 - 20 mmHg in a rat grafted with BS-NSCs. 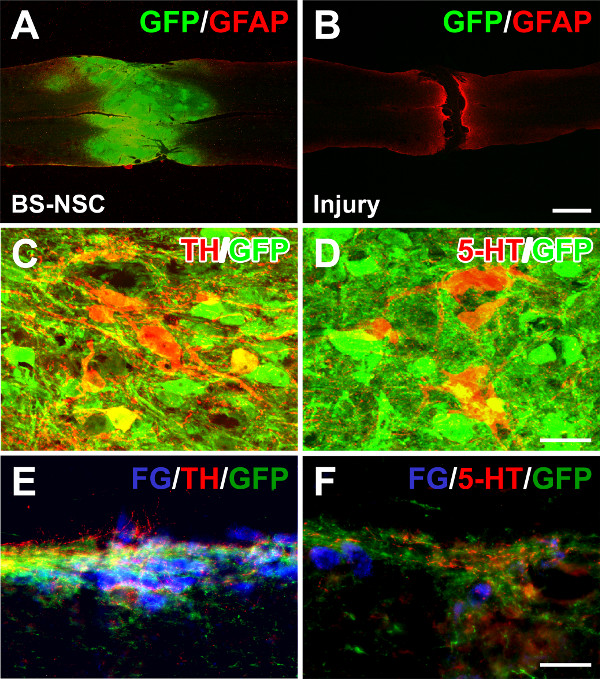 Traditionally, a fluid filled cannula is inserted into the artery and connected to a pressure transducer to record cardiovascular parameters as a terminal snapshot in each animal11. To continuously monitor cardiovascular performance for a long time, radio-telemetric systems are employed in many laboratories. This more refined tool can record blood pressure in conscious, freely moving animals. Compared to fluid filled catheters, telemetry is considered a more advanced technique to accurately evaluate cardiovascular function in SCI animals. Although in the present study a transmitter was implanted only 1 day before recording, it can be implanted before or after SCI for multiple data acquisition depending on the experimental requirements12. For basal blood pressure and HR, either central or peripheral recording can be achieved. However, cardiovascular response to colorectal distension cannot be detected by noninvasive tail-cuff-based method in our experience. Recent telemetric analysis verified the long-term persistence of hypotension and tachycardia after complete high thoracic spinal cord transection in rats9,13. The lower basal MAP and higher HR in our SCI control rats are consistent with previous report using same recording technique. Colorectal-induced autonomic dysreflexia was alleviated in rats that received cell graft. Based on our histological evidence, catecholaminergic and serotonergic inputs to SPNs across multiple spinal segments may account for the physiological improvements.

Transmitter catheterization is critical for successful implantation and recording. In spinal cord transected rats, the diameter of femoral artery is smaller than usual due to the lack of motor and sensory function of the hindlimbs. Complete paralysis usually results in muscular atrophy. Surgeons may find the tip of the catheter to be bigger than the artery. In this case, applying 2% Lidocaine on the surface of the artery eliciting vasodilation allows for the tip of catheter to be easily inserted into the punctured vessels. Notably, lidocaine induced-vasodilation persists approximately 4 - 5 min. Thus, vessel puncture and catheterization should be performed as quickly as possible. In the period of data acquisition of basal parameters, we collected data points every 5 sec for 1 hr. During the 3 min colorectal distension-induced recording, however, data were sampled every 3 sec in order to obtain more data points for a more accurate averaging throughout this short period.

Implantation of a catheter into the femoral artery may interfere with the blood supply of the hindlimb and induce tissue necrosis, especially if the distal artery is sutured. Sealing the catheter insertion point into the artery with a small drop of tissue glue instead of a silk suture can at least partially restore blood flow. Thereby, animals would be healthier for long-term monitoring. Alternatively, the catheter of the transmitter can be implanted directly into the abdominal aorta placing the transmitter body into the abdominal cavity. This method avoids tissue decay in the ipsilateral hindlimb but has a risk of influencing gastrointestinal function.

The work was supported by grants from NIH/NINDS (NS054883), Craig H. Neilsen Foundation (280072), and the Veterans Administration and Canadian Spinal Research Organization. We thank the Rat Resource and Research Center, University of Missouri, Columbia, Missouri, for providing GFP rats. 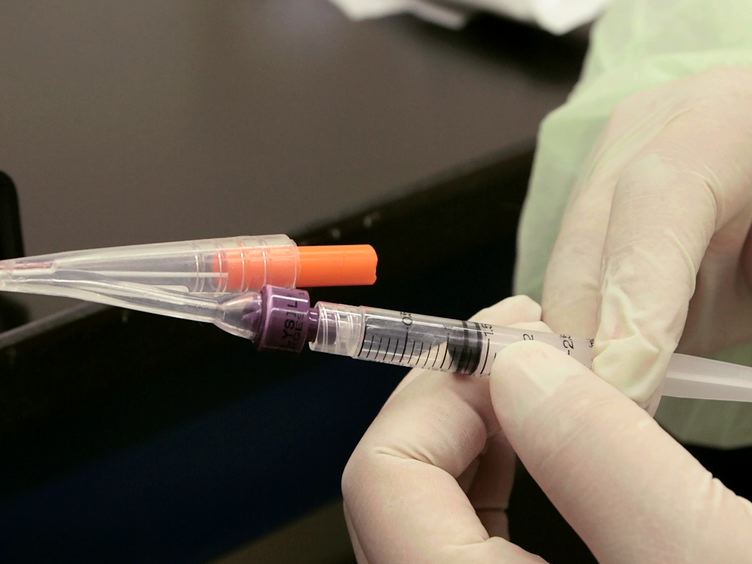