A step-by-step protocol for the inter-positional placement of Tissue Engineered Vessels (TEVs) into the carotid artery of a sheep using end-to-end anastomosis and real-time digital assessment in vivo until animal sacrifice.

The development of Tissue Engineered Vessels (TEVs) is advanced by the ability to routinely and effectively implant TEVs (4-5 mm in diameter) into a large animal model. A step by-step protocol for inter-positional placement of the TEV and real-time digital assessment of the TEV and native carotid arteries is described here. In vivo monitoring is made possible by the implantation of flow probes, catheters and ultrasonic crystals (capable of recording dynamic diameter changes of implanted TEVs and native carotid arteries) at the time of surgery. Once implanted, researchers can calculate arterial blood flow patterns, invasive blood pressure and artery diameter yielding parameters such as pulse wave velocity, augmentation index, pulse pressures and compliance. Data acquisition is accomplished using a single computer program for analysis throughout the duration of the experiment. Such invaluable data provides insight into TEV matrix remodeling, its resemblance to native/sham controls and overall TEV performance in vivo.

The primary focus for the development of TEVs has been to provide a substitute for autologous graft replacement when autologous vessels are not available and to limit donor sight morbidity. For example, the number of coronary artery bypass surgeries per year has exceeded 350,000 in the USA, and the ideal source of suitable grafts remains the left internal mammary artery, left anterior descending coronary artery and saphenous vein1. Since many individuals who suffer from vascular diseases may not have suitable arteries and veins for autologous graft replacement, the development of TEVs has thus become an intense field of research for decades1-6. While the engineering and optimization of novel TEVs have undergone many advancements, reporting on the surgical techniques employed to implant the TEVs themselves has not been a topic of such intense discussion. Rather, protocols regarding the implantation of TEVs into animal models are largely left up to research investigators.

The following manuscript demonstrates how to implant TEVs by utilizing an end-to-end anastomosis approach. This procedure was optimized by using a specific anastomotic suturing pattern, stabilizing suture technique, optimizing longitudinal tension and the addition of in vivo monitoring instrumentation. This method is contrasted with some of the many variations that have been previously used. Furthermore, this procedure describes how to acquire parameters such as arterial blood pressure, TEV diameter/compliance and flow rate through the TEV after surgery up until explantation. This data collection provides an indispensable analysis of the TEV while it is in the process of remodeling.

NOTE: This protocol has been approved by the Animal Care and Use Committee at the State University of New York at Buffalo.

More than 30 sheep have undergone the surgical technique described in this report for the implantation of TEVs (in press) 9. A table summarizing the most recent sheep operations after protocol optimization are shown in Table 2. All sheep recovered after TEV implantation with no life threatening complications. In some animals, fibrosis was observed in native artery near the tip of the indwelling arterial catheter. A significant increase of inflammation with the presence of added instrumentation has not been observed. Rarely (1 of 18 catheters), the catheter has caused obstruction to blood flow through the TEV. This one obstruction occurred after one month. Minor complications from the catheter include dampening of the arterial signal and inability to aspirate blood. The most commonly reported data when pursuing research in TEV development are typically patency rates, flow rates and compliance. This protocol demonstrates that it is possible to obtain such valuable data throughout the duration of the experiment. Although this report focuses on the acquisition of flow rate, diameter and arterial pressure; compliance, augmentation index and pulse-wave velocity may also be calculated. 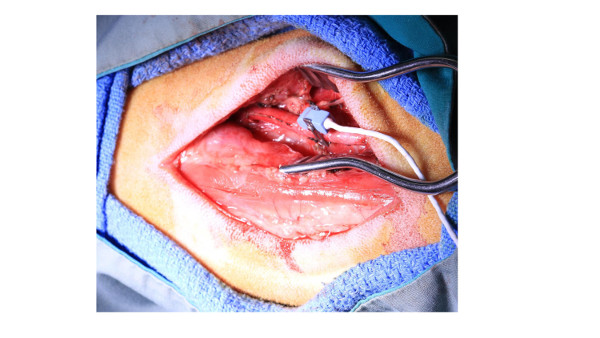 Figure 2. Implantation of TEV. Figure 2-Di illustrates the Distal side of the TEV with 2 of the original four anchor points used to anchor the TEV in place. Once the TEV is anchored, add additional stitches as shown in Figure 2-Pr, which denotes the Proximal side of the TEV. Please click here to view a larger version of this figure. 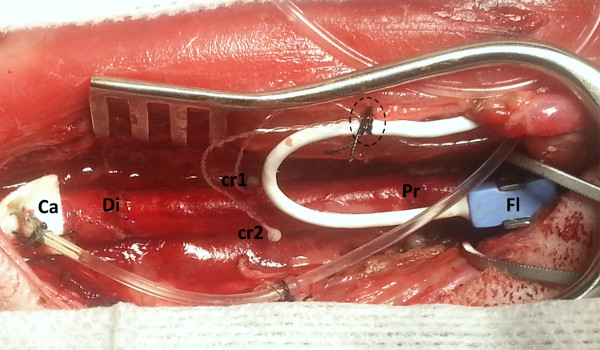 Figure 3. Instrumentation of TEV. 1 mm ultrasonic crystals are stitched onto each side of the implanted TEV (cr1 and cr2). Di denotes the distal side of the TEV while Pr denotes proximal. The flowprobe (Fl) is placed proximal from the TEV while the catheter (Ca) is placed distal. Flow probe and catheter are stitched to nearby musculature (dotted oval). Please click here to view a larger version of this figure. 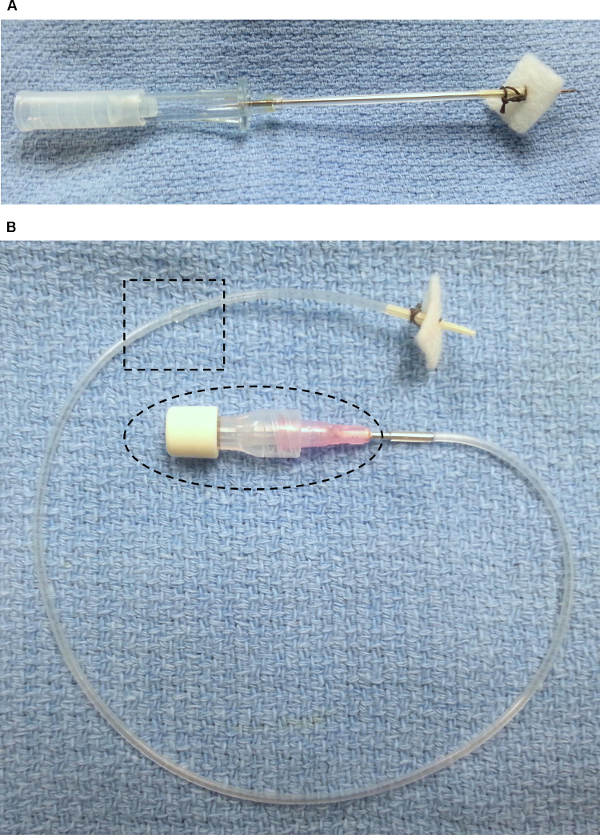 Figure 4A. Catheter used for instrumentation of TEV. Catheter coupled with a Teflon plaquet before being placed distal to TEV on native tissue. Figure 4B. Final assembly of Catheter before implantation. Catheter extended with Tygon tubing (denoted by square) along with 20 G Luer Stub Adapter with Surflo injection plug (denoted by oval). Please click here to view a larger version of this figure. 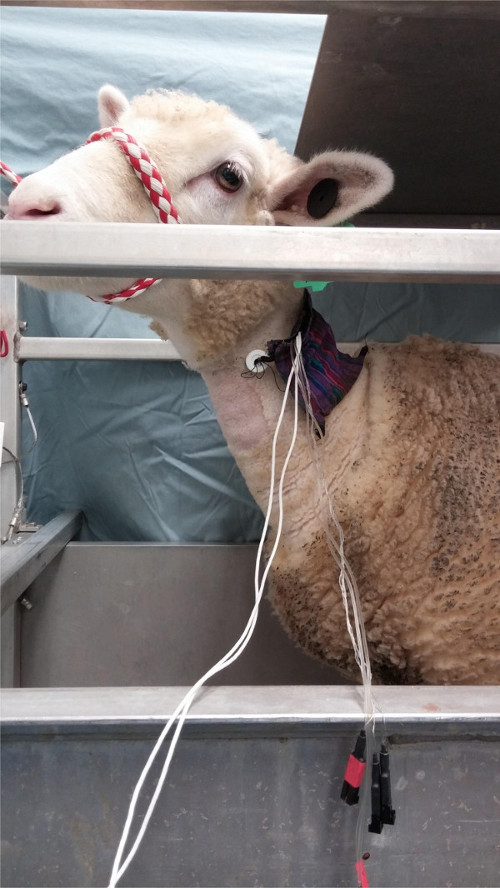 Figure 5. Pouch secured to skin of sheep. Pouch is secured to neck of sheep to protect wiring of 1 mm ultrasonic crystals, flow probe and catheter when not in use. Please click here to view a larger version of this figure. 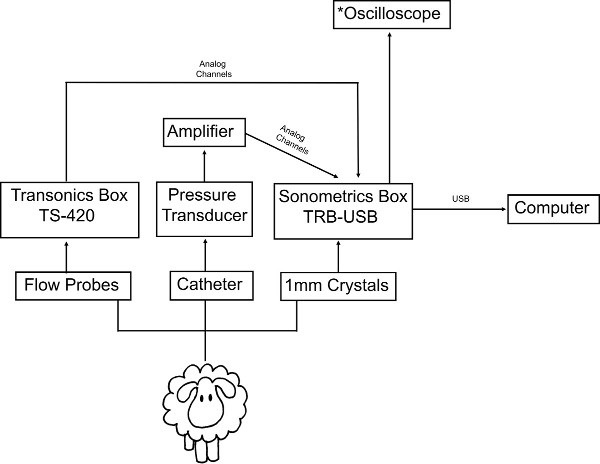 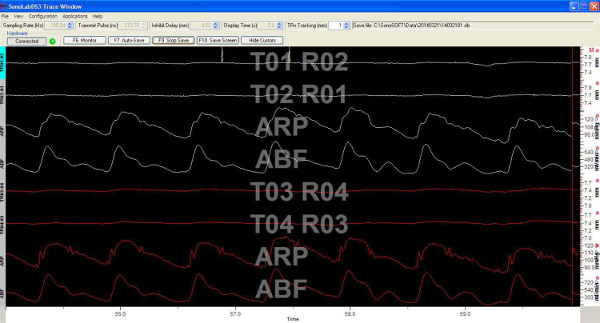 Table 1. Table of all relevant equipment used for surgical procedure.

Table 2. Table summarizing most recent sheep which have undergone TEV and/or Sham implantation. The following table summarizes our most recent TEV implants. All sheep lived through surgical operation and had no complications post recovery.

The purpose of this report is to provide a reliable and reproducible procedure to implant TEVs of interest in the ovine carotid artery. The native carotid arteries of the animals used in this model were 0.5-0.75 mm in thickness and 4.5-5 mm in outside diameter. The surgical technique described here has been successful for implanting TEVs of varying geometries measuring 0.25-1 mm in thickness, 4-5 mm outside diameter and 4 cm in length with great success proving effective up to 3 months duration, the intended end point. The use of this surgical technique has enabled the acquisition of data to be easier to collect and more consistent.

Furthermore, the ability to measure real time parameters of in vivo remodeling has been described. Varying diameters may be used successfully in this model depending upon desired range of mismatch and design of implanted TEV, as well, the duration of implantation may be extended to or beyond 1 year.

One of the greatest advancements in the optimization of this protocol is the use of end-to-end anastomoses using an interrupted suture technique. The current TEV design used in the preparation of this report initially used end-to-end anastomoses using a running suture technique which resulted in a high failure rate (n=3). The precise reason for this remains unknown, however it could have potentially been due to the slight stenotic or non-compliant effect of a running suture at the anastomotic site. In looking for alternative methods to optimize the surgical procedure it was found that previously reported surgical techniques described in literature are somewhat vague. This is primarily due to word limitations imposed by journals forcing researchers to report their surgical techniques in a brief and obscure fashion. Some reports simply state that animals underwent TEV implantation10-12. Others report the use of end-to-side3,5,13,14, or end-to-end4,6 anastomosis. Finally, others specifically state the use of interrupted4, or continuous running suture15. This lack of detail makes it difficult to reproduce or improve upon vascular research requiring surgery, specifically on large animal models. While there is no significant difference reported in patency between end-to-end and end-to-side technique16, in the large animal model reported here, end-to-end is advantageous when operating on the carotid artery due to the anatomy and length of the TEVs commonly evaluated. However, if a large mismatch between the native artery and TEV is present, it may be ideal to adopt an end-to-side technique which has shown promise in rats17.

Ensuring that the surgical technique is not a cause for TEV failure allows researchers to focus on other possible explanations for occlusion. If short-term patency and exposure to physiological conditions such as blood and pressure is the only interest, a previously reported manuscript is available. Here, the use of an ovine ex vivo arteriovenous shunt model designed to evaluate TEV implantability has been optimized18. This model has proven to be very effective in quickly testing multiple TEVs with one animal before committing to implanting a TEV for long-term studies.

If evaluating the integrity of an implanted TEV is desired, unfortunately conventional techniques have drawbacks. Currently ultrasonography or angiogram imaging are the only methods used to evaluate the integrity of the TEV in vivo3,5,6,10-14. Ultrasound imaging does not typically provide the resolution needed to observe compliance changes of the TEV. Angiography is invasive, costly and requires anesthesia of the animal. However, by implanting flow probes, arterial catheters and ultrasonic crystals much of this data can be acquired in a more simplified fashion. This instrumentation of the implanted TEV also allows for parameters such as pulse-wave velocity and augmentation index to be calculated.

The advantage of using sheep for TEV implantation also lends strength for translation of TEVs into a clinical setting. Small animal models such as mice, rats and rabbits do not offer a realistic parallel to those of a clinical setting and therefore large animal models must be explored 19. However, while a large animal model is a more reliable and clinically relevant model, there exist concerns regarding the species used for TEV implantations. Dogs and pigs for example, while often used in vascular research, endothelialize very quickly. Sheep on the other hand only endothelialize close to the anastomosis sites, and not spontaneously within the TEV. This more closely resembles the healing of humans14,19-22.

To further understand what has occurred with respect to host remodeling, the TEV must be explanted and examined, in order to describe cell migration, immobilization and differentiation. Previous work has shown that the addition of lipophilic dye such as Dil as well as the use of GFP+ endothelial cells are reliable methods to assess the fate of implanted cells on the TEV 5,6. Our group has also shown that SRY staining (Sex-determining region Y protein) against male chromosome Y is an effective method to track male implanted cells in a female host (in press). Collagen and elastin content can also be measured after tissue is explanted, shedding more light on the extent of in vivo remodeling. It is also possible to determine whether or not pre-implant as well as explanted tissues can respond to vasoconstrictors and vasodilators when placed into an organ tissue bath. Lastly, TEVs can also be tested to determine their mechanical properties such as Young’s modulus, Ultimate Tensile Strength, and Tensile Strain6,9,23,24.

There are no disclosures to report.

This work was supported by grants from the National Heart and Lung Institute (R01 HL086582) and the New York Stem Cell Science Fund (NYSTEM, Contract# C024316) to S.T.A. and D.D.S. Illustrations used in JoVE video were completed by John Nyquist; Medical Illustrator from State University of New York at Buffalo. 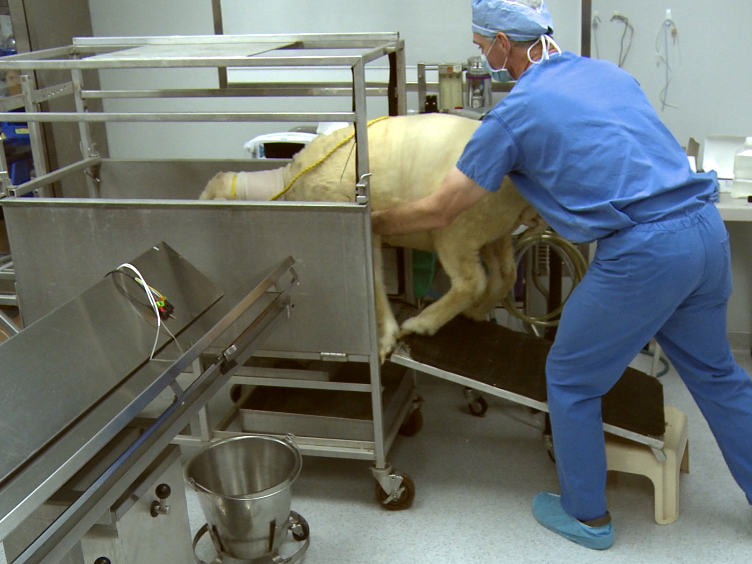