We present the technique to measure with high precision zinc isotope ratios in mouse organs.

We present a procedure to measure with high precision zinc isotope ratios in mouse organs. Zinc is composed of 5 stable isotopes (64Zn, 66Zn, 67Zn, 68Zn and 70Zn) which are naturally fractionated between mouse organs. We first show how to dissolve the different organs in order to free the Zn atoms; this step is realized by a mixture of HNO3 and H2O2. We then purify the zinc atoms from all the other elements, in particular from isobaric interferences (e.g., Ni), by anion-exchange chromatography in a dilute HBr/HNO3 medium. These first two steps are performed in a clean laboratory using high purity chemicals. Finally, the isotope ratios are measured by using a multi-collector inductively-coupled-plasma mass-spectrometer, in low resolution. The samples are injected using a spray chamber and the isotopic fractionation induced by the mass-spectrometer is corrected by comparing the ratio of the samples to the ratio of a standard (standard bracketing technique). This full typical procedure produces an isotope ratio with a 50 ppm (2 s.d.) reproducibility.

The measurement of high-precision (better than 100 ppm/atomic mass unit) zinc stable isotope composition has only been possible for about 15 years thanks to the development of multi-collector plasma-source mass-spectrometers and has since been mostly applied in Earth and planetary sciences. The applications to the medical field are novel and have a strong potential as biomarkers for diseases that modify the metabolism of zinc (e.g., Alzheimer disease). This paper reports a method to measure with high precision the natural stable isotope ratios of zinc in various mouse organs. The same would be applicable to human samples. The method consists of the dissolution of the organs, the chemical purification of zinc from the rest of the atoms, and then the analysis of the isotope ratio on a mass-spectrometer.

The quality of Zn isotopic measurements is dependent on the quality of the chemical purification (purity of Zn, low blank compared to the amount of Zn present in the sample, high chemical yield of the procedure) and on the control of the instrumental bias. The high purity of the final Zn fraction is needed to remove both isobaric interferences and non-isobaric interference that create a matrix effect. Isobaric nuclides create direct interferences (e.g., 64Ni). Non-isobaric interferences generate the so-called “matrix” effect and alter the analytical precision of the measurements by changing the condition of the ionization compared to the pure zinc standard to which the samples are compared to1. A low blank (< 10 ng) indicates that there is no contamination of the samples by external Zn that would bias the measured isotopic composition. As Zn isotopes can be fractionated during ion-exchange chromatography2, the collection of all the Zn atoms ensures that no isotopic fractionation occurs, which implies that the chemical procedure should have a full yield. Finally, the correction of the instrumental isotopic fractionation during the mass-spectrometry measurement is done via the “standard bracketing” method.

Therefore, the main difficulties to obtain precise measurements are controlling the external contamination (i.e., low blank), producing a full yield chemical purification that is clean of any other atoms or molecules, and correcting the instrumental isotopic fractionation on the mass-spectrometer. In this paper we will describe our analytical protocol to separate Zn from the mouse organs as well as the mass-spectrometry measurements.

The extraction is done using a low quantity of diluted acids (HBr/HNO3 media) on micro-columns (0.5 µl and 0.1 µl) of anion-exchange resin. It has a full yield and the measurements have an external reproducibility better than 50 ppm on the 66Zn/64Zn ratio. Another advantage of the method is that it is very fast. The method is therefore very well adapted to medical sciences, in which one needs to analyze a large number of samples compared to geosciences, where these analytical methods were developed.

NOTE: Procedures involving animals have been approved by the Institutional Animal Care and Use Committee (IACUC) at the Université Paris Diderot.

In 1.5 N HBr, the main zinc species (ZnBr3-) forms very strong complexes with the anion-exchange resin, while most other elements do not interact with the resin. Zinc is then recovered by changing the medium to diluted HNO3, changing the speciation of Zn to Zn2+ which is released from the resin6,7.

Isotope ratios are typically expressed as parts per 1,000 deviations relative to a standard:

with x = 66 or 68. The reference material used is the Zn “Lyon” standard JMC 3-0749 L1. The “Lyon” standard is the most broadly used reference material to normalize Zn isotope data. All the isotopic results reported are therefore relative. Using this reference the isotopic composition of the Earth for δ66Zn is 0.28 ± 0.058. Since the JMC-Lyon standard is not easily available, in the absence of this standard the alternative is to use the standard IRMM-3702 as a reference during the measurements and convert the results using reference 9 as: 66ZnJMC-Lyon = 66ZnIRMM-3702+0.29. The typical blank is < 10ng.

Typical results obtained with this method are represented in the Figure 1, as a three-isotope plot (δ68Zn vs δ66Zn) for different mouse organs. Table 2 and 3 report results of replicated experiments of a typical terrestrial rock (a Hawaiian basalt) and of mouse red blood cells. 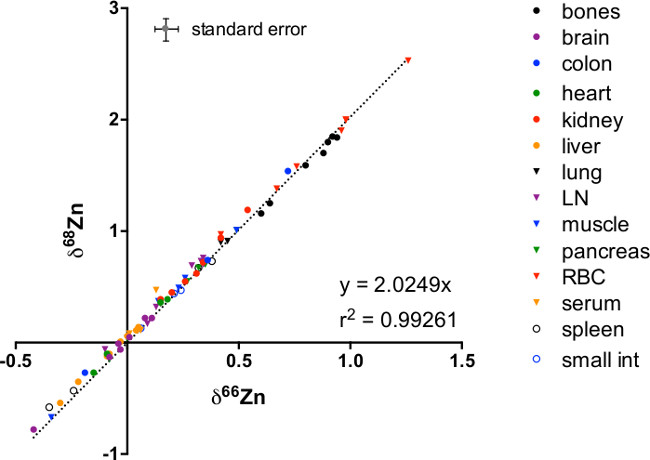 The reproducibility of the measurements is evaluated through replicated analyses of the same samples carried out during different analytical sessions. For example6, we have replicated the same terrestrial rock 7 times and we obtained the results reported in the Table 2.

As expected from the theory of isotopic fractionation10 and as measured in any solar system material so far (e.g., meteorite11-13, plants3-5, deep-sea sediments14, animals15-17), the results follow a mass-dependent law (see Figure 1). δ68Zn is about twice δ 66Zn (Figure 1), because the mass difference between 68Zn and 64Zn is twice the difference between 66Zn and 64Zn. This shows that our measurements are free of isobaric interferences (that would drive the data out of the straight-line) and that zinc isotopes are fractionated out of the same isotopic pool.

For mouse organs, the limited amount of Zn in each organ has prevented us from performing many replicates of a single organ15. However, we can estimate a higher limit for the reproducibility by comparing data for the same tissue for different mice of the same age and same strain (for example for the bones of 16 week old mice, Table 3). This reproducibility is larger (0.04 vs 0.07 for the δ66Zn) than what was estimated from basaltic rocks, which is not surprising because it includes the heterogeneity of the samples as well as the isotopic variability between the different mice. It is therefore an overestimation of the reproducibility, and we believe that the precision on each individual organ would be similar to what we had determined on basaltic rocks. We can safely assume reproducibility better than 0.10 for the δ 66Zn (2 s.d.) which represents a precision 10 times larger than the variability reported between certain organs (see Figure 1 and reference 15).

Measuring the stable isotope composition of Zn will be used in the future as a diagnostic tool for diseases that modify the Zn balance of the body. For example, the zinc-rich plaques associated with the Alzheimer disease change the concentration of zinc in the serum and since the brain and the serum have different isotopic composition15 Zn isotopes could be used to detect early stage of the disease.

Most alternative methods to measure the Zn isotopic composition by MC-ICP-MS involve chemical purification in concentrated HCl media on larger columns than the one used here1-4. Our method based on micro-columns and diluted acids has low blanks and produces data which are two times more precise (50 ppm vs 100 ppm 2 s.d.). In addition, our method is very fast (due to the small size of the columns and the little amount of acid used) and is very well suited to analyze large amount of samples (as usually needed in clinical studies). The simplicity of the method would be well suited to be used in an automatic chemical purification system which would allow the measurements of a large numbers of samples.

One limitation of this approach is that only large bulk samples can be analyzed (the procedure uses ~ 1 µg of Zn). Reducing the size of the samples is crucial when dealing with precious clinical samples. This method is also limited to bulk measurements, while for some applications in situ analyses may be needed. Future improvement on the technique should be in relation with improving in situ isotopic measurements by combining a laser-ablation system with the plasma mass-spectrometer (LA-MC-ICP-MS). This would allow the measurements of spatially small samples without prior chemical purification (which tends to contaminate the samples). In addition, in situ measurements will allow the measurement of the Zn isotopic composition on living tissues. To our knowledge there has only been one attempt to measure zinc isotope ratios using such a technique18 and the method is still not precise enough, however, measurements of high-precision isotope ratio by LA-MC-ICP-MS has been done for Fe19 and B20 and refining of the technique using modern lasers may lead to a major breakthrough.

FM acknowledges funding from the ANR through a chaire d’Excellence IDEX Sorbonne Paris Cité, the INSU through a PNP grant, the Institut Universitaire de France as well as the Labex UniverEarth program at Sorbonne Paris Cité (ANR-10-LABX-0023 and ANR-11-IDEX-0005-02). We also thank funding from the European Research Council under the European Community's H2020 framework program/ERC grant agreement #637503 (Pristine). 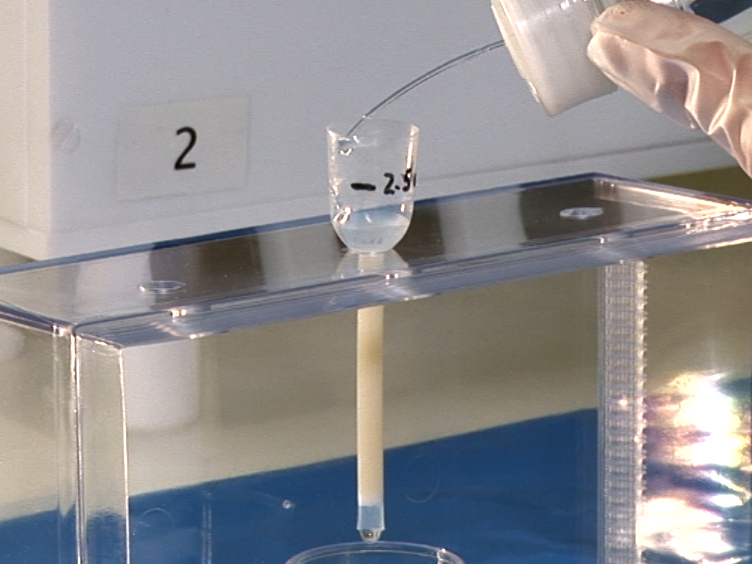