A method for fluorescent staining of fixed biological material with the specific DNA label methyl green is described. Methyl green is used in a diluted aqueous solution and is very resistant to photobleaching. Its far-red emission allows for deep specimen imaging, making it particularly adequate for whole embryos.

Methyl green has long been known as a histological stain with a specific affinity for DNA, although its fluorescent properties have remained unexplored until recently. In this article, we illustrate the method for preparing a methyl green aqueous stock solution, that when diluted can be used as a very convenient fluorescent nuclear label for fixed cells and tissues. Easy procedures to label whole zebrafish and chick embryos are detailed, and examples of images obtained shown. Methyl green is maximally excited by red light, at 633 nm, and emits with a relatively sharp spectrum that peaks at 677 nm. It is very inexpensive, non-toxic, highly stable in solution and very resistant to photobleaching when bound to DNA. Its red emission allows for unaltered high resolution scanning confocal imaging of nuclei in thick specimens. Finally, this methyl green staining protocol is compatible with other cell staining procedures, such as antibody labeling, or actin filaments labeling with fluorophore-conjugated phalloidin.

Fluorescent staining of DNA is broadly and routinely used both in biological research and in clinical diagnosis, either for the detailed study of nuclear and chromosomal structure, for counterstaining tissues and cells, or for studying cell cycle parameters1. Although several DNA stains are available, the most widely used have been those excited by UV light and emitting in blue, which fit in the usual three-filter systems used in most conventional epifluorescence microscopes when combined with green and orange-red-emitting fluorophores, such as fluorescent proteins or small molecules attached to antibodies. Among these blue-emitting DNA stains, the most common are DAPI and Hoechst minor groove-binding agents2,3. Nonetheless, the incorporation of a wide variety of laser emission lines and spectral detection in laser scanning microscopes, has allowed researchers to choose for the use of far-red-emitting nuclear stains such as propidium iodide (PI) or TO-PRO 34. An advantage of these stains is that they overcome the problem of autofluorescence found in many cells and tissues, particularly in embryos5, but many of them have different problems such as having wide emission profiles or being very sensitive to photobleaching6.

The Swiss researcher Friedrich Miescher discovered DNA in 1869, extracting it from the nuclei of white blood cells found in pus. He called it nuclein, and showed a few years later that it formed precipitates with the relatively new stain methyl green. Methyl green is composed by three aniline rings, with different degrees of methylation, and has two positive charges that allow it to strongly bind to the major groove of DNA7,8. DNA staining by methyl green was very early shown to be specific, leading to the development by Unna and Pappenheim of a combined stain with pyronin, which specifically labels RNA. Methyl green-pyronin has since then been extensively used in routine histological technique9.

Until recently, very little was known about the fluorescent properties of methyl green. Our previous work, however, has uncovered some of methyl green spectral advantages6 such as its excitation at 633 nm, a convenient Stokes shift, its emission on the near-infrared portion of the electromagnetic spectrum, higher photostability than commercially available DNA stains with similar spectral properties and at a very low cost. This is why we decided to test it for being used as a very high affinity and specific fluorescent label for DNA on embryonic tissues and in whole embryos. Furthermore, until now methyl green nuclear staining was performed at low pH, making it difficult to combine with antibody staining. The goal of the method detailed here is to have a protocol for fluorescent nuclear DNA staining which overcomes the aforementioned inconvenience by performing the staining procedure at physiological pH, thus making it a suitable counterstain for immunolabeling on sections and whole tissues.

1. Purification of the Dye

Methyl green DNA staining allows discrimination of cell cycle dependent morphological differences such as the identification of mitotic figures or apoptotic nuclei (Figure 2A). Subnuclear structures at high resolution are also evident as shown for epidermal nuclei of zebrafish embryos (Figure 2B).

Methyl green is resistant to photobleaching under high intensity irradiation for prolonged periods of time. When irradiated with 633 nm laser light at the same intensity, methyl green nuclear staining does not bleach out as it is the case of another DNA-specific stain sharing similar spectral characteristics, TO-PRO-34. A confocal plane of the retina of a whole-mounted zebrafish embryo was selected and zoomed in with a 63x 1.4NA objective to achieve high irradiation. When zoomed out, the specimens stained with TO-PRO-3 showed bleaching within 60 seconds of continuous irradiation (Figure 3, upper panels), while the specimens stained with methyl green showed no visible evidence of photobleaching even at 120 seconds in the same conditions (Figure 3, lower panels). Images acquired in LASAF software were further processed (brightness/contrast; 3D reconstruction; maximum intensity projection) using Fiji open source software (http://fiji.sc/). 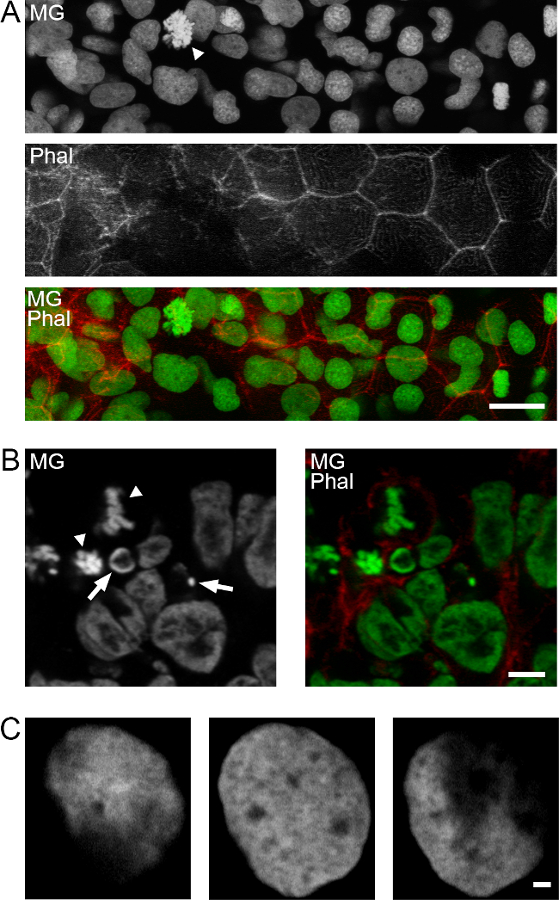 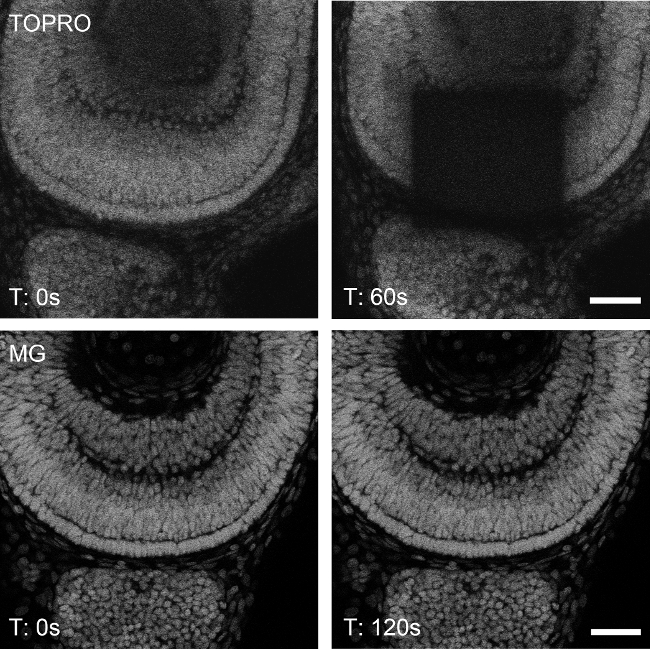 Figure 3: Photostability of methyl green under continuous excitation. TO-PRO-3-stained nuclei of a 48 hpf zebrafish retina was bleached upon 60 sec of continuous excitation at 633 nm (upper panels). Under the same conditions, a methyl green-stained embryo (MG) did not show perceptible bleaching, even when duplicating the exposure time (lower panels). Bleaching and acquisition was made by scanning in single planes, at 8,000 Hz, 30% laser power and line (x2) and frame (x4) averaging. Scale bar: 30 µm.

The progressive development of microscopy techniques in the last decades, with a particular focus in variations of fluorescent microscopy, have led to the possibility of exploring the dynamics and structure of intact tissue samples, including whole embryos10,11. One major limitation has been, however, the availability of good quality fluorophores that can be used to directly and quickly stain subcellular structures.

The most frequently used fluorescent DNA stains, such as DAPI or Hoechst, are excited with UV light and emit in the blue area of the visible spectrum2,3, making them inadequate for imaging of deep structures in whole tissues. Red light penetrates much better into biological samples, making red-emitting fluorophores more suitable for these studies12. Autofluorescence is a common problem in embryonic tissues that can also be overcome by using red-emitting fluorophores5.

We have shown that the very common histological stain methyl green is a highly efficient red-emitting fluorophore when bound to DNA, and it can be applied to the detection of DNA in microscopy, flow cytometry, fluorometry or gel electrophoresis6. The protocol for fluorescent nuclear labeling of whole embryos with methyl green described here is relatively fast and straightforward. It is an inexpensive technique and a stock solution suitable for hundreds of experiments can be prepared with minimal effort in the lab.

The critical steps of this method are stain purification, specimen permeabilization and incubation times for whole embryos. Crystal violet contamination can easily affect methyl green fluorescent properties thus making it essential to have a highly pure methyl green solution. Methyl green is safer than ethidium bromide as it is a non-intercalant dye which cannot enter cells unless when membrane integrity is compromised, and this is the basis for its application as a vital dye. However, when nuclear DNA is to be stained in fixed embryos, it is required that cuticles and cells go through a permeabilization step such as the ones described here, i.e. incubation with a detergent. Thicker embryos require longer incubation times, as methyl green will enter the embryos by diffusion and minimal incubation times described herein can be used as a reference for other types of specimens. Although we have not tested methyl green in thicker diaphanized tissues as whole mounted organs, due to its spectral properties we do not forsee major limitations to its use provided that chemical clarification (i.e. CLARITY, methysalicilate, Sca/e, etc) does not react with methyl green. An interesting point would be to test its suitability for multi-photon excitation, as this illumination allows for deeper specimen penetration. A simple and useful modification of the protocol can be used for cultured cells by incubating them for 5 minutes with methyl green.

Finally, methyl green emission spectrum is relatively narrow when compared with other red-emitting DNA stains (such as propidium iodide), it presents a relatively large Stokes shift (44 nm) and it is extremely resistant to photobleaching. All these characteristics make it ideal for high resolution laser confocal imaging of whole embryos, as it can be combined with several other fluorophores at the same time and it allows for long exposures.

The authors would like to acknowledge Patxi Jaso for the production of the video, PEDECIBA and Agencia Nacional de Investigación e Innovación (ANII) for partial funding. 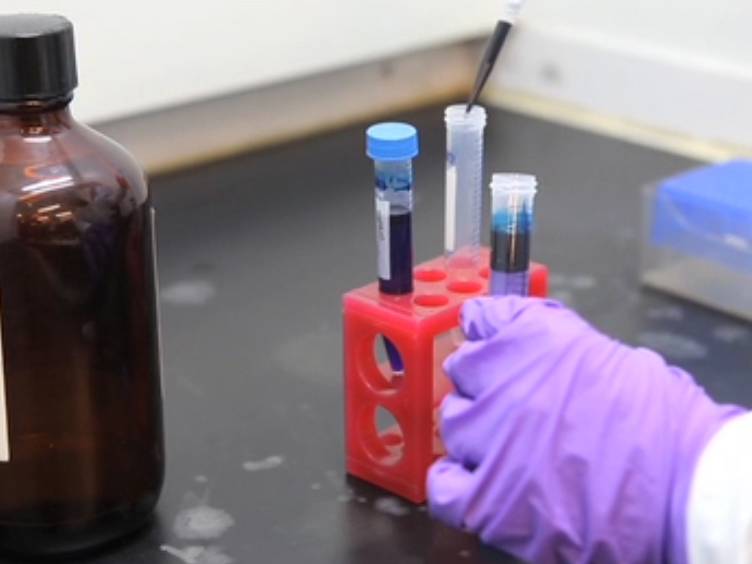