The identification of molecules associated with specific genomic regions of interest is required to understand the mechanisms of regulation of the functions of these regions. This protocol describes procedures to perform engineered DNA-binding molecule-mediated chromatin imunoprecipitation (enChIP) for identification of proteins and RNAs associated with a specific genomic region.

The identification of molecules associated with specific genomic regions of interest is required to understand the mechanisms of regulation of the functions of these regions. To enable the non-biased identification of molecules interacting with a specific genomic region of interest, we recently developed the engineered DNA-binding molecule-mediated chromatin immunoprecipitation (enChIP) technique. Here, we describe how to use enChIP to isolate specific genomic regions and identify the associated proteins and RNAs. First, a genomic region of interest is tagged with a transcription activator-like (TAL) protein or a clustered regularly interspaced short palindromic repeats (CRISPR) complex consisting of a catalytically inactive form of Cas9 and a guide RNA. Subsequently, the chromatin is crosslinked and fragmented by sonication. The tagged locus is then immunoprecipitated and the crosslinking is reversed. Finally, the proteins or RNAs that are associated with the isolated chromatin are subjected to mass spectrometric or RNA sequencing analyses, respectively. This approach allows the successful identification of proteins and RNAs associated with a genomic region of interest.

The identification of molecules associated with specific genomic regions of interest is required to understand the mechanisms of regulation of genomic functions such as transcription and epigenetic regulation. Although several techniques have been developed for biochemical analysis of specific genomic regions1-7, they are not used widely at this stage because of their intrinsic problems such as limited application (e.g., only for high-copy number loci or loci with repeats) and too much time and efforts required.

In order to perform biochemical analysis of specific genomic regions easily, we have developed two locus-specific chromatin immunoprecipitation (ChIP) technologies, namely insertional ChIP (iChIP)8-13 and engineered DNA-binding molecule-mediated ChIP (enChIP)14-17. In iChIP, a locus of interest is tagged by inserting recognition sequences of an exogenous DNA-binding protein such as LexA. The locus is then isolated by affinity purification using the tagged DNA-binding protein. In enChIP, engineered DNA-binding molecules, such as zinc-finger proteins, transcription activator-like (TAL) proteins, and clustered regularly interspaced short palindromic repeats (CRISPR) complexes, are used to tag a locus of interest (Figure 1). Subsequently, the genomic region is isolated by affinity purification of the tagged DNA-binding molecules.

One of the advantages of enChIP over iChIP is that insertion of recognition sequences of an exogenous DNA-binding protein is not necessary. Targeting of loci using CRISPR complexes consisting of a catalytically inactive form of Cas9 (dCas9) and a guide RNA (gRNA) is much easier than targeting of these regions by iChIP or enChIP using TAL and zinc-finger proteins. Here, we describe a step-by-step protocol for enChIP combined with mass spectrometry and RNA sequencing (RNA-Seq) to identify locus-associated proteins and RNAs, respectively.

2. Establishment of Cells for the enChIP Analysis

3. Crosslinking of Cells with Formaldehyde

7. Preparation of Dynabeads Conjugated with Antibodies (per 2 x 107 cells)

10. Purification of RNA and RNA-Seq Analysis 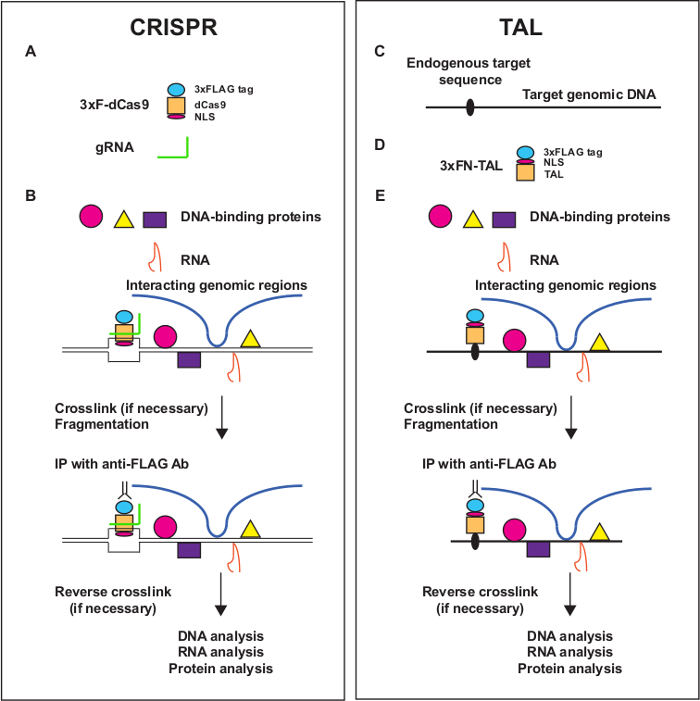 Figure 1. Overview of enChIP. enChIP using CRISPR (A, B) and TAL (C, D, E) is shown. A locus of interest is tagged with engineered DNA-binding molecules such as a TAL protein or the CRISPR system consisting of a catalytically inactive form of Cas9 (dCas) and guide RNA (gRNA). The molecular interactions are fixed with formaldehyde or other crosslinkers, if necessary. Subsequently, fixed chromatin is fragmented by sonication or enzymatic digestion. The tagged genomic regions are purified by affinity purification. Finally, crosslinking is reversed, and interacting molecules (genomic regions, RNAs, and proteins) are identified using next generation sequencing and mass spectrometry. Please click here to view a larger version of this figure. 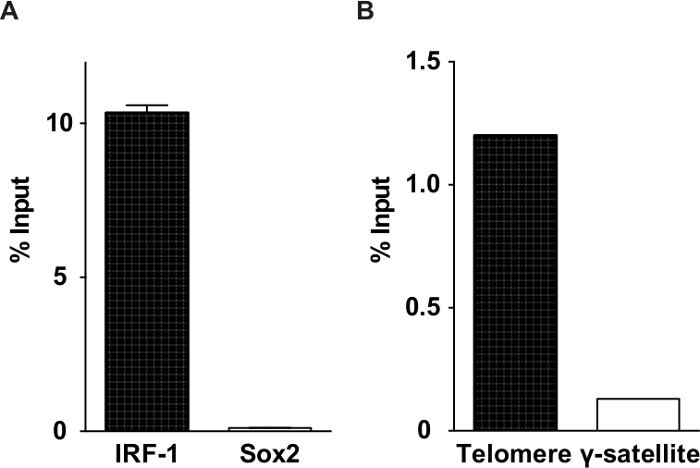 Table 1: Examples of proteins associated with the human IRF-1 promoter region in an IFNγ-specific manner identified by enChIP-SILAC. The table has been adapted from a previous publication16.

Table 2: Examples of proteins associated with mouse telomeres identified by enChIP-MS. The table has been adapted from a previous publication15.

Table 3: Examples of RNAs associated with mouse telomeres identified by enChIP-RNA-Seq. The table has been adapted from a previous publication17.

Here, we describe the purification of specific genomic regions using engineered DNA-binding molecules such as the CRISPR system and TAL proteins, and the identification of proteins and RNAs bound to these genomic regions. Binding of engineered DNA-binding molecules to the genome may affect chromatin structure, including nucleosome positioning, and may abrogate genomic functions, as described in CRISPR interference experiments21. To avoid these potential aberrant effects, we propose specific guidelines for choosing target genomic regions. First, to avoid potential inhibition of the recruitment of RNA polymerases and transcription factors, as well as disruption of nucleosome positioning around the transcription start site, the target regions for analyses of promoter regions should be several hundred base pairs upstream of (5' to) the transcription start site. By contrast, when analyzing genomic regions with distinct boundaries, such as enhancers and silencers, genomic regions that are directly juxtaposed to these regions can be targeted because it is less likely that the binding of engineered DNA-binding molecules will affect their functions. Furthermore, it is best to avoid using target regions that are conserved among different species, because important DNA-binding molecules often bind to evolutionarily conserved regions and inhibition of their binding might disrupt the functions of the target genomic regions. In this regard, it is always necessary to check that the function of the target genomic region is maintained in the established cells used for enChIP analyses. Because multiple gRNAs can be tested easily and it is tedious and expensive to generate multiple versions of TAL or zinc-finger proteins recognizing different target genomic regions, enChIP using CRISPR is more advantageous than enChIP using other proteins.

It has been shown that dCas9 binds to off-target sites although affinity to those sites might be weaker than that to the target sites22-25. There are several ways to manage contamination of molecules bound to those off-target sites. First, the use of several, at least two, different gRNAs would be recommended. Those molecules commonly observed in enChIP using distinct gRNAs would be true positives. Second, comparison of different conditions for enChIP would be effective in cancelling contamination of non-specific molecules and molecules bound to off-target sites. Examples of those comparison sets would be (i) stimulation (-) and (+), or (ii) different cell types such as T cells vs. B cells. Finally, quantitative analysis of binding of candidate molecules should be performed to confirm their specific binding to the target sites. It is preferable to prepare cells expressing only dCas9 but not gRNA as a negative control.

Using enChIP analyses, we were able to successfully identify a number of known and novel molecules interacting with specific genomic regions (Tables 1-3)14-17. However, this technique failed to detect some other known proteins interacting with these regions. For example, STAT1 reportedly associates with the IRF-1 promoter upon IFNγ stimulation8, but our enChIP-SILAC analysis did not detect STAT1 as a protein induced to interact with this genomic region16. In addition, in the enChIP-MS analysis of telomeres, we did not detect shelterin proteins consisting of TRF-1 and TRF-215, which have been shown to interact with telomeres26. There are a few potential reasons for these discrepancies. First, the stoichiometry of binding of Stat1 to the IRF-1 promoter might be very low. It is reasonable that enChIP-MS, including enChIP-SILAC, detects proteins that are more abundantly associated with target genomic regions; hence, the analysis of more cells might be necessary to detect these proteins. Increases in the sensitivities of MS instruments would also contribute to the efficient detection of proteins with low stoichiometric binding. Second, some proteins, possibly including Stat1 and shelterins, might be difficult targets for MS analyses. Third, in our analysis of telomere-binding proteins15, the 3×FLAG-TAL proteins recognizing telomeres (3×FN-Tel-TAL) might have blocked the binding of shelterins to telomeres in a competitive fashion.

The authors have filed a patent on enChIP (Patent name: 'Method for isolating specific genomic regions using DNA-binding molecules recognizing endogenous DNA sequences'; Patent number: PCT/JP2013/74107). H.F. is a member of the Advisory Board of Addgene. 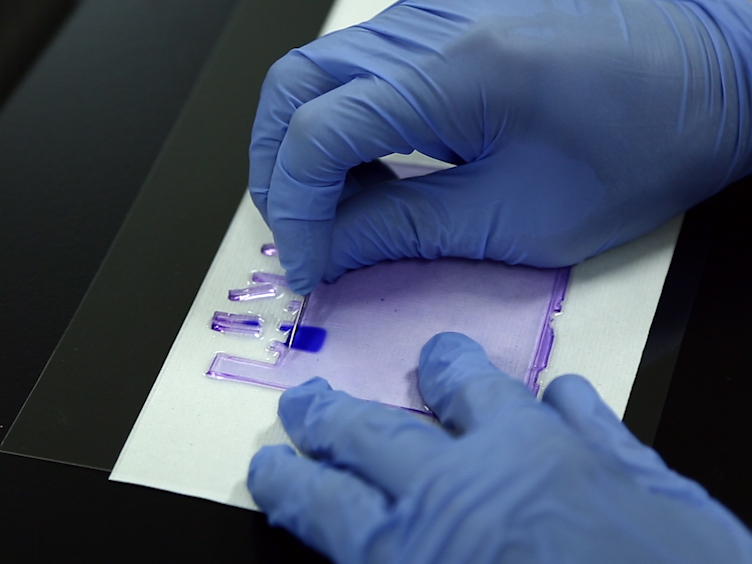