We present a facile method to fabricate a biodegradable gelatin-based drug release platform that is magneto-thermally responsive. This was achieved by incorporating superparamagnetic iron oxide nanoparticles and poly(N-isopropylacrylamide-co-acrylamide) within a spherical gelatin micro-network crosslinked by genipin, in conjunction with an alternating magnetic field application system.

Magnetically-responsive nano/micro-engineered biomaterials that enable a tightly controlled, on-demand drug delivery have been developed as new types of smart soft devices for biomedical applications. Although a number of magnetically-responsive drug delivery systems have demonstrated efficacies through either in vitro proof of concept studies or in vivo preclinical applications, their use in clinical settings is still limited by their insufficient biocompatibility or biodegradability. Additionally, many of the existing platforms rely on sophisticated techniques for their fabrications. We recently demonstrated the fabrication of biodegradable, gelatin-based thermo-responsive microgel by physically entrapping poly(N-isopropylacrylamide-co-acrylamide) chains as a minor component within a three-dimensional gelatin network. In this study, we present a facile method to fabricate a biodegradable drug release platform that enables a magneto-thermally triggered drug release. This was achieved by incorporating superparamagnetic iron oxide nanoparticles and thermo-responsive polymers within gelatin-based colloidal microgels, in conjunction with an alternating magnetic field application system.

Stimuli-responsive drug delivery systems that enable a tightly controlled drug delivery in response to either endogenous or exogenous stimuli (e.g., temperature or pH) have been extensively investigated as new types of smart soft devices for drug delivery. Microscale hydrogels have been widely employed as a drug delivery platform in that they confer controllable and sustainable drug release profiles as well as tunable chemical and mechanical properties1-3. In particular, the colloidal microgels exhibit many advantages as a vehicle for drug delivery due to their rapid responsiveness to external stimuli and suitable injectability to local tissue in a minimally invasive manner4. The poly(N-isopropylacrylamide) (pNIPAM) or its copolymers have been widely adopted in synthesizing thermo-responsive microgels by grafting pNIPAM with biodegradable/ biocompatible polymers including gelatin, chitosan, alginate acid, or hyaluronic acid5,6, in which a phase transition characteristic of pNIPAM at its lower critical solution temperature (LCST) can be used as a trigger of drug release7. We recently demonstrated a fabrication of biodegradable, gelatin-based thermo-responsive microgel by incorporating poly(N-isopropylacrylamide-co-acrylamide) [p(NIPAM-co-AAm)] chains as a minor component within three-dimensional gelatin networks8. The gelatin/p(NIPAM-co-AAm) microgel exhibited a tunable deswelling to temperature increase, which positively correlated to the release of bovine serum albumin (BSA).

During the last several years, there have been increasing efforts to develop a magnetically responsive drug delivery platform that can trigger the release of drug in an on-demand fashion9,10. The basic principle for the synthesis of magnetically responsive drug delivery platform utilizes the characteristic of superparamagnetic nanoparticles (MNPs) to generate heat when they receive a high frequency alternating magnetic field (AMF), which triggers a temperature-sensitive drug release. This holds promise for future clinical applications in that this system can target deep into the tissue, enables a non-invasive and remotely controlled drug release and can be combined with hyperthermia treatment and magnetic resonance imaging system10-12. Such platforms include: (1) MNPs/pNIPAM hybrid microgel particles 13-15 and (2) macroscopic hydrogel scaffolds incorporating immobilized MNPs16-18. The pNIPAM-based microgel platforms demonstrated a finely-tunable volume phase transition responsiveness to magneto-thermal stimuli. However, they still rely on complex and sophisticated techniques in the fabrication and the use of pNIPAM polymers with a high content can be potentially cytotoxic to cells19, which may limit their in vivo applications. The macroscopic scaffolds exhibit a relatively slow response to external stimuli and require an invasive surgical transplantation compared to colloidal microgels.

The water-in-oil emulsification has been the standard method to produce submillimeter or micrometer-sized gel particles20. At the water-oil interface of the emulsion, microgel particle forms a spherical shape due to the minimization of surface energy of the water droplet under mechanical shear force. This method allows the production of a large amount of aqueous spherical gel droplets in a simple fabrication procedure and has been successfully adopted for fabricating gelatin-based microgels for drug delivery applications21-23.

Here, we present a facile method to synthesize a magnetothermally responsive gelatin-based microgels for drug delivery application by employing the water-in-oil emulsification method. This was achieved by physically incorporating iron oxide MNPs and p(NIPAM-co-AAm) chains as a minor component within a spherical microscale gelatin network that is covalently crosslinked by a naturally-derived crosslinker genipin, in conjunction with a high frequency alternating magnetic field (AMF) application system.

Note: The overall process of fabricating magnetic field-responsive gelatin microgels is illustrated in Figure 1A.

3. Gelation and Transfer of Micro-droplets to an Aqueous Solution

4. Covalent Crosslinking of the Microgels

When the protocol is performed correctly, the fabricated microgels should exhibit a well-characterized spherical morphology and colloidal dispersibility with diameters in the range between 5 μm to 20 μm (Figure 1B and C). Either fluorescent MNPs or fluorescent BSA can be used to confirm whether MNPs or drugs (BSA in this study) are properly encapsulated within the microgel (Figure 1D). The fabricated microgels can be stable and stored at 4 oC for up to 4 weeks in the absence of any enzymatically degrading agents including collagenase. The incorporation of p(NIPAM-co-AAm) in the gelatin microgel enables it to exhibit a temperature dependent volume change (Figure 2A), in which the increase of temperature of the media from 22 oC to 42 oC resulted in the deswelling of gelatin microgels incorporating p(NIPAM-co-AAm) by ~40% in volume, in contrast to only ~10% volume change for gelatin microgel without p(NIPAM-co-AAm) (Figure 2B). The extent of deswelling of the gelatin/p(NIPAM-co-AAm) microgels can be tuned as functions of the crosslinking degree of the gelatin matrix and the concentration of p(NIPAM-co-AAm)8. 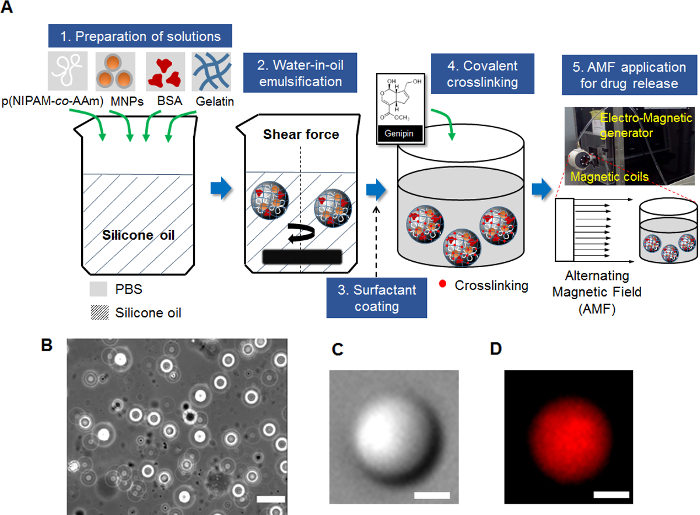 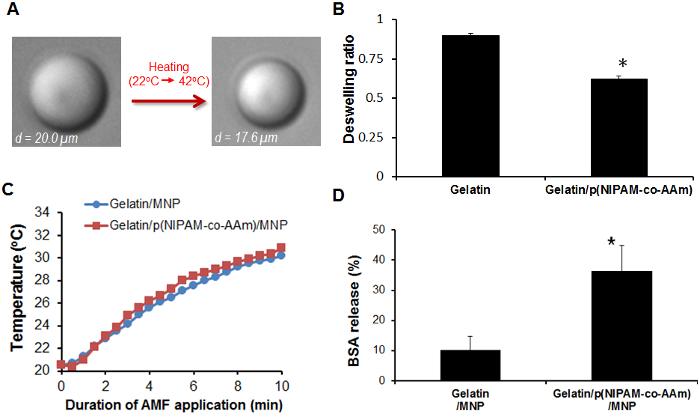 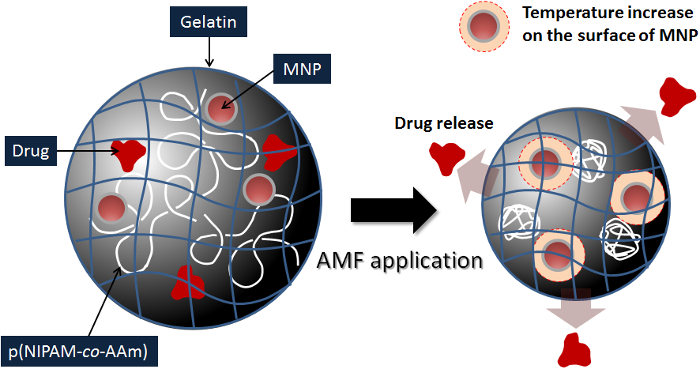 Figure 3. A Schematic Illustration of the Potential Mechanism by Which Gelatin/p (NIPAM-co-AAm)/MNPs Microgel Releases Drugs in Response to AMF Application. Please click here to view a larger version of this figure.

The technology described here demonstrates a proof of concept on the use of nanoparticle-microgel hybrids for magneto-thermally triggered drug release. This was achieved by physically entrapping MNPs and p(NIPAM-co-AAm) chains within a microscale three-dimensional gelatin network crosslinked by genipin. The magnetic field-responsive platform was sufficient to generate heat within the microgel in response to a remotely applied AMF, which in turn triggered the release of a model drug, BSA.

We previously reported that the application of a high frequency AMF to MNPs could trigger increase in temperature on the surface of MNPs in a manner that is proportional to the magnitude of AMF strength and concentrations of MNPs25. It has been shown that AMF strength of 5 - 30 kA/m is sufficient to induce an appropriate heating on the surface of MNPs9,25,26. Thus, the extent of drug release from gelatin/p(NIPAM-co-AAm)/MNPs microgel can be tuned by appropriately changing parameters, which include the amount of p(NIPAM-co-AAm), crosslinking time, the amount of MNPs, and AMF parameters (field intensity, frequency, and duration of exposure).

In our protocol for fabricating magneto-thermally responsive microgels, the most critical step is the covalent crosslinking of gelatin gel particles in genipin solution. Careful control of the crosslinking time and temperature, as well as maintaining homogeneity of the microgel suspension in the genipin solution, is required to achieve desired gel elasticity, which may influence the microgel responsivity. After crosslinking, the removal of unreacted genipin molecules is also an important step.

The gelatin has been shown to be biocompatible with low immunogenicity and enzymatically degradable8,27. The chemical crosslinker, genipin, has been considered to be non-toxic28. Thus, our gelatin-based drug delivery platform exhibiting characteristics of magnetic responsivity and suitable biodegradability may offer a useful tool for tissue engineering application as an on-demand drug carrier.

However it should be also noted that the current protocol has limitations. First, the microgels made by water-in-oil emulsification method generally exhibit a polydispersity, which may result in heterogeneity in encapsulation of drugs and MNPs among particles. Microfluidics can be a good alternative to overcome this limitation29. Second, the current drug delivery system still has a limitation that it must be used at a body temperature of 37 ˚C due to a small degree of deswelling characteristic at the temperature, associated with a relatively low value of LCST (~ 34 ˚C) for poly(NIPAM-co-AAm) polymer used in this study. The use of thermoresponsive polymer that can exhibit a higher LCST may overcome this issue30. 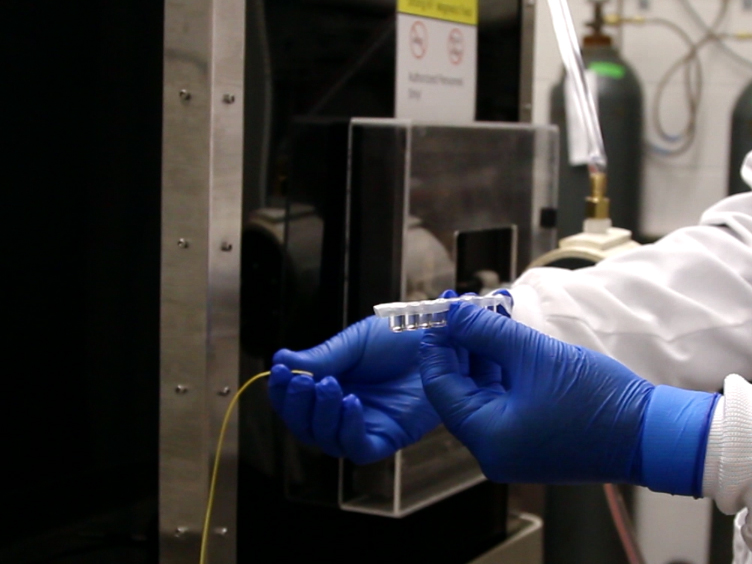