Mitochondria play a central role for cell metabolism, energy production and control of apoptosis. Inadequate mitochondrial function has been found responsible for very diverse diseases, ranging from neurological pathologies to cancer. Interestingly, mitochondria have recently been shown to display the capacity to be transferred between cell types, notably from human mesenchymal stem cells (MSC) to cancer cells in coculture conditions, with metabolic and functional consequences for the mitochondria recipient cells, further enhancing the current interest for the biological properties of these organelles.

Mitochondria are organelles found in eukaryotic cells where they play a central role in nutrient uptake as well as in energy and metabolite production. These organelles contain circular mitochondrial DNA (mtDNA), 16.6 kb long, that encodes proteins of the electron transport chain complexes, tRNAs and rRNAs 1. The functionality of these organelles is critical for cell homeostasis and several pathologies have been associated with mitochondria dysfunction 1,2,3. The mitochondria status has for instance been linked to inflammation, infectious diseases and cancer, in this latter case with consequences for metastasis and resistance to therapy 4,5,6,7.

Mitochondria display the remarkable capacity of getting transferred between "donor" and "target" cells. This leads to changes in the energetic metabolism of the target cells as well as in other functional modifications such as tissue repair and resistance to chemotherapeutic agents, as recently shown by different laboratories 8,9,10,11,12,13,14,15,16. The human mesenchymal stem cells (MSCs) display this ability to transfer mitochondria to a wide variety of target cells, including cardiomyocytes, endothelial cells, pulmonary alveolar epithelial cells, renal tubular cells and cancer cells, leading to modifications of the functional properties of these cells 8,9,10,12,17,18.

Mitochondria exchange now appears as a widely used mechanism that allows a number of different cell types to communicate with one another and modify their biological properties. This mitochondria exchange can occur through tunneling nanotubes (TNT) formation, involving connexin 43-containing gap junctions 8 or M-Sec/TNFaip2 and the exocyst complex 19. Alternatively, the mitochondria transfer was also shown to be mediated by arrestin domain-containing protein 1-mediated microvesicles (ARMMs) 20. Interestingly, the efficacy of the mitochondria transfer was linked to the expression rate of the Rho GTPase 1 MIRO1 21, a key factor for explaining the differences in mitochondria transfer efficacies between iPSC-MSCs and adult BM-MSCs 22.

In spite of this wealth of data concerning cell-to-cell mitochondria exchange, relatively little is known about the metabolic and biological outcome of this mitochondria transfer. Therefore, it fully warrants setting up the appropriate tools to fully assess the biological effects of this transfer. Over the years, several technical approaches to transfer mitochondria from donor to acceptor cells have been proposed. This includes direct injection of mitochondria into oocytes 23,24,25, cell fusion to generate transmitochondrial cybrids 26,27 and, more recently, transfer of isolated mitochondria using photothermal nanoblades 28.

We and others previously demonstrated the capacity of isolated mitochondria to be internalized by living cells, as observed both in vitro and in vivo 29,30,31, through mechanisms proposed to involve macropinocytosis 32. We further developed a method, called MitoCeption, to quantitatively transfer isolated mitochondria (from MSCs) to target cells, as exemplified with the (adherent) MDA-MB-231 breast cancer cell line 31. This protocol was adapted here for the transfer of isolated human MSC mitochondria to glioblastoma stem cells (GSCs).

Glioblastoma are aggressive malignant tumors of the brain that rapidly become resistant to treatment, mainly due to glioblastoma stem cells (GSC) present within the tumor 33. These GSCs grow as neurospheres in vitro and generate tumors in xenograft models. Cancer cells within glioblastoma have the capacity to make cell-to-cell connections, as shown recently for astrocytic brain tumor cells that interconnect via extended microtubes, through which mitochondria (as well as calcium and cell nuclei) can migrate, resulting in radiotherapy-resistant astrocytoma networks 34. Glioblastoma can recruit many different cells within the tumor microenvironment, including MSCs 35,36. We showed that MSCs can make cell-cell connections with GSCs in coculture and transfer their mitochondria (data not shown), which is expected to modify GSC functional properties. The present protocol describes how the MitoCeption technique can be used to transfer mitochondria, isolated beforehand from human MSCs, to human GSCs with the purpose of determining their functional biological outcome. The multipotent and highly tumorigenic Gb4 GSC line 37 was used in this study.

6. Analysis of the Mitochondria Transfer by FACS and Confocal Imaging

The procedural steps outlining the isolation of mitochondria from mesenchymal stem cells (MSC) and their transfer to the targeted glioblastoma stem cells (GSC) by MitoCeption are shown in Figure 1. GSCs are cancer stem cells grown as neurospheres to preserve their stem cell properties. For the protocol, GSCs are seeded as single cells a couple of hours before the transfer of mitochondria (step 3) to allow higher mitochondria transfer efficiency (see FACS data Figure 3B). Following Section 5 (day 3), these cells are observed again as forming neurospheres (Figure 1).

The transfer of MSC mitochondria and their maintenance inside the GSCs can be followed by quantifying MSC mitochondrial DNA (mtDNA) in the GSCs. This requires MSCs and GSCs to be obtained from different donors, with distinct haplotypes. Figure 3C shows mtDNA sequences found within the D-loop of two donors with single nucleotide polymorphisms (SNPs) indicated at the 3' end position. For the design of PCR primers, to specifically amplify mtDNA from either donor 1 or donor 2, an additional mutation was introduced at position n-2 relative to the 3' end of the PCR primers. The mtDNA from donor 1 could be amplified with the set of primers: 5'-TAACAGTACATAGCACATACAA-3' and 5'-GAGGATGGTGGTCAAGGGA-3' (universal sequencing primer 38), while the set of primers: 5'-TTAACTCCACCATTAGCACC-3' (universal sequencing primer from 38) and 5'-AGTATTTATGGTACCGTCCG-3' was used to amplify the mtDNA from donor 2. 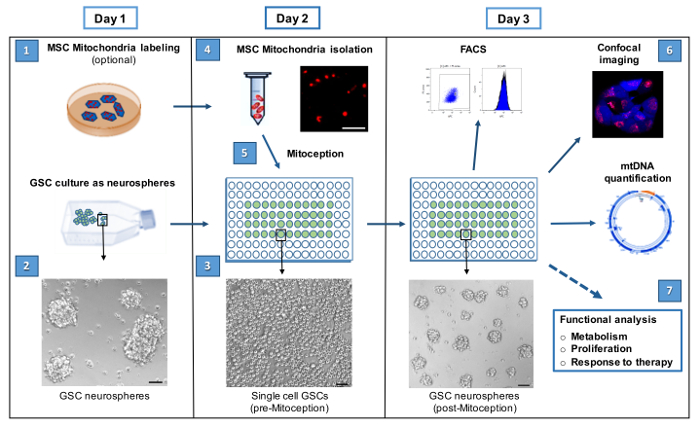 Figure 1: Workflow for the transfer of isolated MSC mitochondria to GSCs by MitoCeption. The 7 steps for the MitoCeption of MSC mitochondria to GSCs and the subsequent GSC analyses are shown. The step numbers are indicated as in the protocol section. If MSC and GSC labeling is not performed, as for functional analyses, steps 1 and 2 can be omitted and the protocol can be followed from day 2 on. Phase contrast images represent Gb4 GSCs as neurospheres (day 1), as unicellular culture ready for the MSC mitochondria transfer (day 2) and 24 hr after the mitochondria transfer (day 3). Scale bar = 100 µm. In step 4, representative photomicrograph of isolated MSC mitochondria, prelabeled with MitoTracker Red CMXRos before isolation from MSCs. Scale bar = 5 µm. Please click here to view a larger version of this figure. 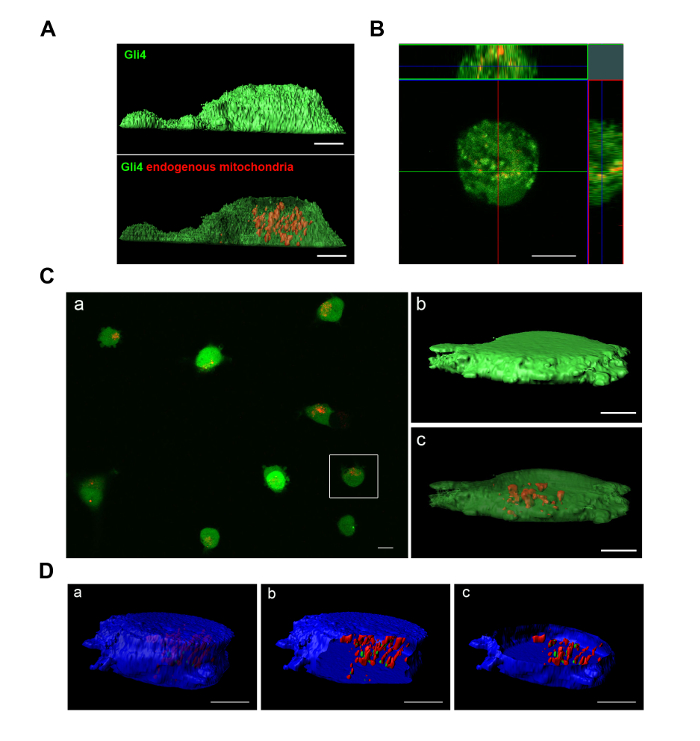 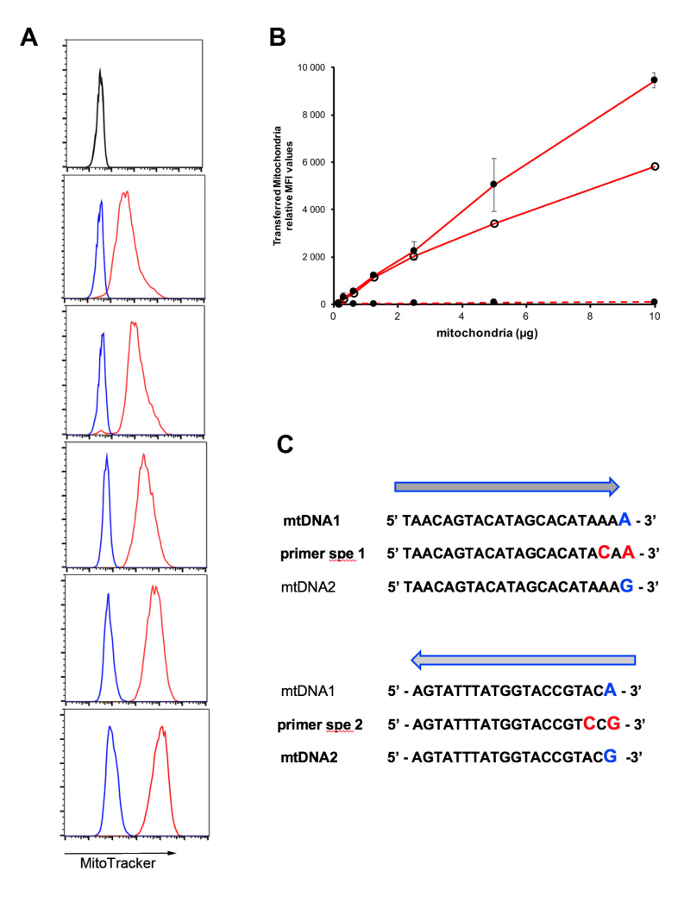 Figure 3: Quantification of the mitochondria transfer by fluorescence-activated cell sorting (FACS) and detection of MSC mitochondrial DNA (mtDNA) in the GSCs. (A, B) GSCs were MitoCepted with MSC mitochondria prelabeled with a deep red mitochondria vital dye and analyzed by FACS. (A) Representative FACS results obtained with MitoCepted GSCs (in red, from top to bottom: 0.6; 1.2; 2.5; 5; 10 µg MSC mitochondria preparation (for 105 GSCs)). In blue, for each panel, control FACS profile of GSCs incubated with the culture medium conditioned with the same amount of MSC mitochondria as used for MitoCeption (see step 5.4). Control conditions with unlabeled GSCs in black (top). (B) Relative mean fluorescence intensity (MFI) obtained after the mitochondria transfer on single cell GSCs (- •) (average of 3 experiments, with SEM), on one-day GSC neurospheres (- o) and with control mitochondria supernatants on GSC single cells (--). (C) DNA sequences within the mtDNA D-loop and SNP differences between donors 1 and 2. SNPs are indicated in blue at the 3' end of the sequences. Design of primers for specific PCR amplification of mtDNA from either donor (primers spe 1 and 2). Please click here to view a larger version of this figure.

An increasing number of studies show that cells can exchange mitochondria and that these mitochondria have profound effects on the target cell metabolism and functions. Therefore, it is essential to master the tools to quantitatively transfer mitochondria from the donor cells to these target cells to enable an accurate study of their biological effects.

The protocol described here was originally worked out to transfer mitochondria isolated from human mesenchymal stem cells to the adherent cancer cell line MDA-MB-231 33. As shown here, it can be adapted for cancer stem cells that grow as neurospheres in vitro. Although the mitochondria transfer does occur when MSC mitochondria are added to the GSC neurospheres, it was found to be more efficient on single cell GSCs, as described in the present protocol. This protocol could also be extrapolated to other non-adherent cells, like T cells, with the need to adapt the seeded cell concentration for the MitoCeption step.

If MSCs and GSCs are isolated from different donors (with different mtDNA haplotypes), the transferred MSC mitochondria can be monitored by measuring the concentrations of MSC mtDNA in the targeted GSCs. The discrimination between the MSC and endogenous GSC mtDNAs is based on the presence of SNPs, specific for each cell type, in the mtDNA hypervariable D-loop region. Therefore, among the various applications of the MitoCeption technique, the possibility of transferring mitochondria harboring mitochondrial DNA with different haplotypes not only allows detection of the transferred mitochondria but also provides the tools to study the biology of mtDNA maintenance, including the analysis of haplotype exclusion.

We thank Andrea Parmeggiani (L2C and DIMNP, Montpellier), Benoit Charlot (IES, Montpellier) as well as members of the laboratory for helpful discussions, Christophe Duperray for help with the FACS analysis, the Montpellier RIO imaging facility (MRI) for providing the adequate environment for FACS and confocal microscopy. B.N.M was supported by a graduate fellowship from the LabEx Numev (convention ANR-10-LABX-20). A.B. was supported by an undergraduate fellowship from the University of Warsaw and European Union (n° POKL.04.01.02-00-221/12). M.L.V is a staff scientist from the National Center for scientific research (CNRS). 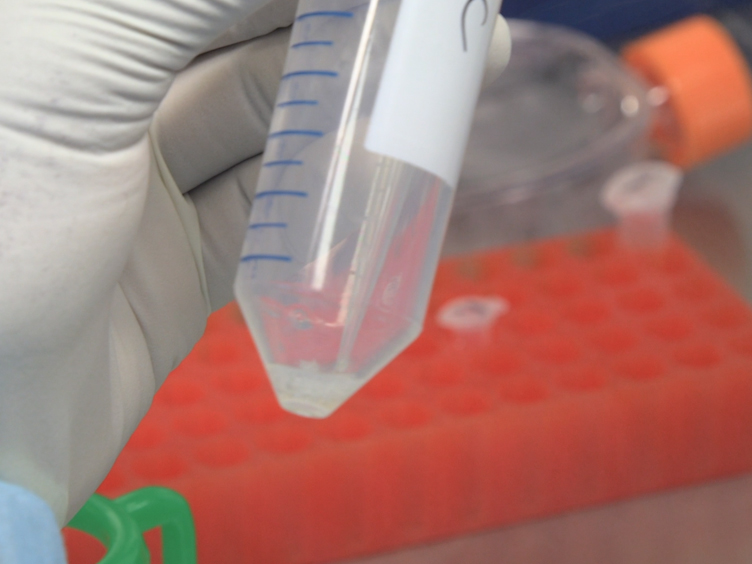