Human pluripotent stem cells (hPSCs) possess great value for biomedical research. hPSCs can be scaled and differentiated to all cell types found in the human body. The differentiation of hPSCs to human hepatocyte-like cells (HLCs) has been extensively studied, and efficient differentiation protocols have been established. The combination of extracellular matrix and biological stimuli, including growth factors, cytokines, and small molecules, have made it possible to generate HLCs that resemble primary human hepatocytes. However, the majority of procedures still employ undefined components, giving rise to batch-to-batch variation. This serves as a significant barrier to the application of the technology. To tackle this issue, we developed a defined system for hepatocyte differentiation using human recombinant laminins as extracellular matrices in combination with a serum-free differentiation process. Highly efficient hepatocyte specification was achieved, with demonstrated improvements in both HLC function and phenotype. Importantly, this system is easy to scale up using research and GMP-grade hPSC lines promising advances in cell-based modelling and therapies.

Primary human tissue and the derivative cell types are regularly used, both for cell-based screening and in the clinic. However, access to these cells is severely limited due to insufficient organ donation and loss of cell phenotypes post-isolation1. hPSCs represent a promising alternative to primary tissue and facilitate the generation of genetically defined and renewable human somatic cells. Hepatocyte-like cells (HLCs) derived from hPSCs have already shown promise in this field. HLCs resemble primary human hepatocytes in various aspects, including cell morphology, hepatocyte gene expression, metabolic function, and sensitivity to drugs and viruses2,3,4,5,6,7,8. In addition, the unlimited proliferation and self-renewal capacity of both research- and GMP-grade hPSCs facilitates their application9,10.

Over a decade of research has produced a number of efficient hepatocyte differentiation procedures2,3,5,11,12,13,14,15,16,17,18,19,20. However, most of these systems use undefined components and/or viral transduction to drive hepatocellular specification. To improve the reliability of the technology at scale, it is important to develop a robust hepatocyte differentiation system that is truly defined, xeno-free, and GMP-compatible.

Laminins (LNs) are important extracellular matrix proteins that can influence cell adhesion, proliferation, migration, and differentiation. Laminins are heterotrimeric glycoproteins composed of one α, one β, and one γ chain. Recently, recombinant human laminins have been produced and used in cell biology. LN-511 has been shown to support the maintenance of hPSCs21, while a mixture of LN-521 and E-cadherin allows clonal derivation and the expansion of human embryonic stem cells22. LN-111, on the other hand, supports the maintenance of hepatoblast-like cells derived from hPSCs23. However, before our report, laminins 521 and 111 had not been utilized to generate HLCs with mature characteristics from hPSCs10.

Here, we detail procedures for culturing hPSCs on LN-521 and differentiating them on either LN-521 or a blend of LN-521 and LN-111 (LN-521/LN-111). We optimized the differentiation protocol using single-cell seeding to generate a highly reproducible and homogenous monolayer of HLCs in many formats14. We believe that our defined differentiation system represents a simple and cost-effective method to manufacture active HLCs for application, representing a significant step forward in the field.

NOTE: Vendor information for all reagents used in this protocol has been listed in Table 1. All media/plates should be sterile and at least at room temperature when cells are to have direct contact with them.

NOTE: The cell passaging procedure described below is based on single cells and is ideal for the derivation of a homogenous population of hepatocyte-like cells from hPSCs. Colony plating is also applicable and has been described previously24.

One human embryonic stem cell line, H9, and one human induced pluripotent stem cell line, 33D6, were used for hepatocyte differentiation. The results in Figures 1-3 are from H9 cells, while those in Figure 4 are from 33D6 cells. Single cells seeded onto laminins established cell-cell contact after 24 h. After the cells reached around 40% confluency, the differentiation process was initiated (Figure 1A and Figure 4A). On laminins (both LN-521 and LN-521/LN-111), these cells went through sequential morphological changes and gave rise to polarized HLCs (Figure 1 and Figure 4A).

Day 18 HLCs were collected and assessed for the expression of representative hepatocyte markers, HNF4A and ALB (Figure 2A). Immunostaining of day 18 HLCs showed that nearly 90% of the cells expressed HNF4α (Figure 2B). These cells polarized on laminins and exhibited a polygonal appearance, as marked by E-cadherin and F-actin expression (Figure 2B).

The differentiation of hiPSCs was similar to that of hESCs. The cells exhibited sequential changes in appearance (Figure 4A). Derived HLCs expressed a key hepatocyte transcription factor, HNF4α (Figure 4B), and possessed CYP3A activity and secreted albumin (Figure 4C and D). Notably, HLCs derived from 33D6 displayed reduced CYP3A in comparison to H9 cells derived HLCs (Figure 3), but it was still comparable to human primary hepatocytes10. However, the albumin secretion of these HLCs was much lower than in primary hepatocytes10. 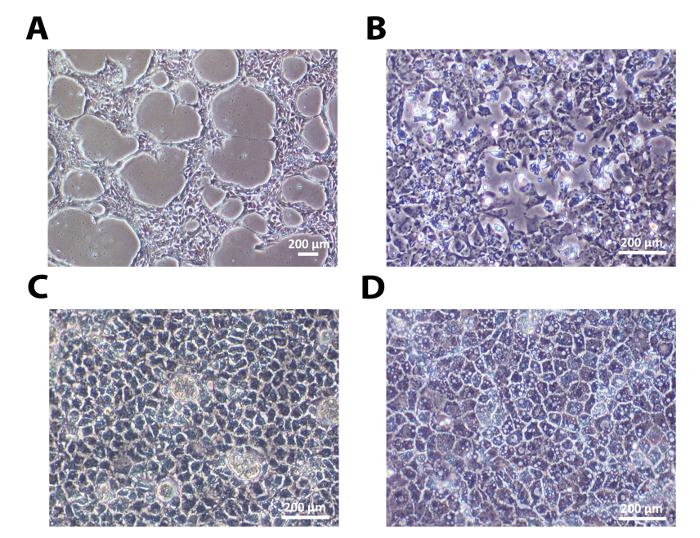 Figure 1: The Sequential Morphological Changes during Hepatic Differentiation. (A) Undifferentiated hESCs seeded as single cells reached around 40% confluency 24 h after seeding. (B) After priming, cells exhibited the typical endodermal morphology on day 4. (C) Upon reaching the hepatoblast-like stage, they showed a clear polygonal shape on day 9. (D) After the maturation stage, polarized HLCs were ready for further characterization shown here at day 18. Scale bar = 200 µm. Please click here to view a larger version of this figure. 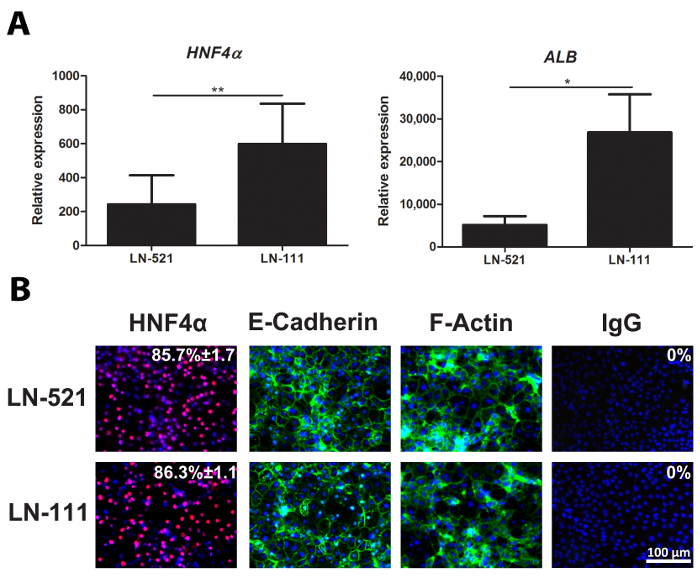 Figure 2: Characterization of HLCs. (A) Gene expression of hepatocyte-specific markers, HNF4A (left) and ALB (right). The expression level was analyzed using day 18 HLCs derived from hESCs on both LN-521 and LN-521/LN-111, and it was normalized to the housekeeping gene GAPDH and expressed relative to hESCs. The results represent three biological replicates, and the error bars represent standard deviation (SD). * p < 0.05, ** p < 0.01; unpaired t-test. (B) Protein expression of a key hepatic marker, HNF4α, and polarization markers, E-cadherin and F-actin. Day 18 HLCs on LN-521 and LN-521/LN-111 were stained for the above markers and counterstained with Hoechst 33342. A negative control was performed with the corresponding immunoglobulin G (IgG). The percentage of HNF4α-positive cells and the SD is shown. This was calculated from four random fields of view. Images were taken at 20X magnification. Scale bar = 100 µm. Please click here to view a larger version of this figure. 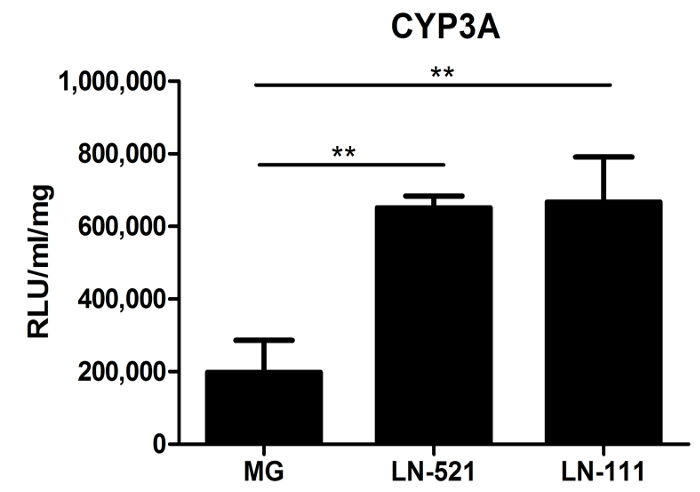 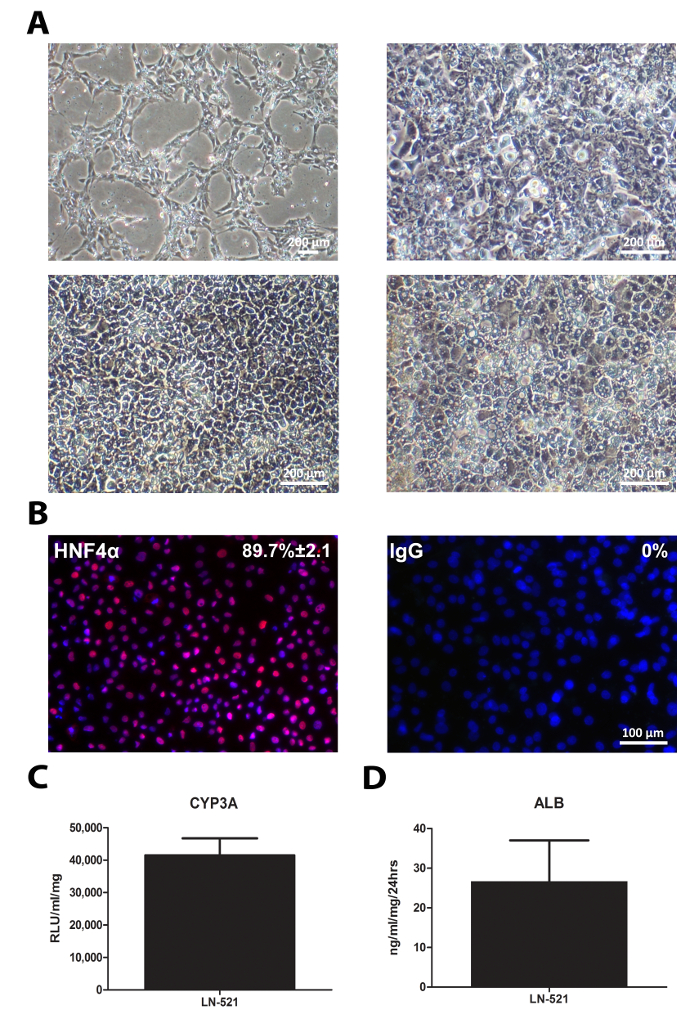 Figure 4: Standard Characterization of HLCs. hiPSCs cultured on LN-521 were differentiated into HLCs. Standard characterization tests were performed on day 17 HLCs. (A) The sequential morphology of the cells during hepatic differentiation; the time points shown represent cells on days 1, 4, 9, and 17. (B) Immunostaining of HNF4α expression. The percentage of positive cells and the SD is shown based on four random fields of view. Images were taken at 20X magnification. Scale bar = 100 µm. (C) CYP3A activity on day 17 HLCs. The data represent six biological replicates, and the error bar represents the SD. (D) Albumin secretion of derived HLCs over 24 h in culture. The data represent four biological replicates, and the error bar represents SD. Please click here to view a larger version of this figure.

Figure 5: Schematic Timeline of the Differentiation Protocol. Please click here to view a larger version of this figure.

Laminins are multifunctional extracellular matrix proteins in vivo. In the liver, laminin secretion is crucial for liver regeneration after a partial hepatectomy27 and is required for hepatic progenitor cell maintenance28. The importance of laminins in liver maintenance and regeneration was the basis for testing commercially available recombinant human laminins in our hepatocyte differentiation system.

Superior hepatocyte differentiation was achieved on LN-521 and LN-521/LN-111 substrates when compared to Matrigel. Derived HLCs were clearly polarized and organized in the dish, and their cellular function was significantly improved when compared to their gelatinous protein mixture counterparts. Underlying these improvements was the downregulation of contaminating colon-, fibroblast- and stem cell-associated genes on the laminins, as well as a decrease in cell proliferation and migration-associated gene expression10.

In conclusion, the protocol described here generates hepatocyte-like cells that are closer in nature to adult human hepatocytes. The process is reproducible, amenable to automation, and can be cost-effectively scaled for application. Importantly, batch-to-batch variation has been significantly decreased in comparison to techniques that use Matrigel, resulting in an improved differentiation system for researchers within this field.

Dr. David C. Hay is a co-founder and director of Stemnovate Limited.

This work was supported with awards from the UK Regenerative Medicine Platform (MRC MR/L022974/1 and MR/K026666/1) and a China Scholarship. 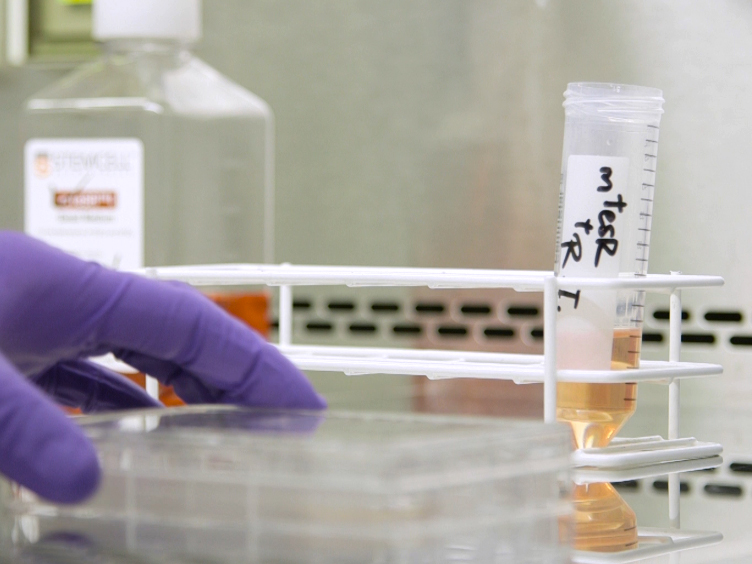