Here, we present an efficient hydrolysis and subsequent Fmoc protection of an amino acid isolated from a Ni-Schiff-base complex. Hydrolysis conditions presented here are suitable for use when retention of acid-labile side-chain protecting groups is required. This technique may be adaptable to a variety of unnatural amino acid substrates.

Unnatural amino acids (UAA's) bearing side chains that vary from those of the twenty naturally occurring amino acids found in nature have found utility in a wide-range of applications. Synthesis of these UAA's, however, can be difficult depending on the structure of the side-chains and the stereochemistry of the amino acid backbone. C-H bond activation of glycine in the context of a nickel Schiff-base complex has been used to produce a variety of amino acid derivatives including α,β-diamino acids1 and UAA's bearing fluorinated2 or heterocyclic side-chains.3

After addition of unnatural side-chains, functionalized UAA's are typically removed from the Schiff-base complex by reflux in hydrochloric acid4 and are subsequently isolated using ion-exchange chromatography. While generally efficient, this protocol generates amino acids that may be unsuitable for use in solid-phase peptide synthesis (SPPS). The nature of SPPS requires the presence of acid-labile side-chain protecting groups and the strongly acidic nature of typical Ni-Schiff-base decomposition conditions prevents isolation of UAA's with these protecting groups intact. To our knowledge, only one alternative decomposition method has been reported: use of ethylenediaminetetraacetic acid (EDTA) and hydrazine at elevated temperatures,5 conditions that themselves may not be suitable for some side-chain protecting groups such as phthalimides.

Figure 1: Synthesis of Ni-PBP-Gly from Ni2+, PBP, and Glycine (Gly). Please click here to view a larger version of this figure.

Herein, we report a method for hydrolysis of a Ni-Schiff-base complex, Ni-PBP-Gly (Figure 1). This complex, derived from Ni2+, glycine, and pyridine-2-carboxylic acid(2-benzoyl-phenyl)-amide (PBP),6 has been demonstrated to be a useful platform for synthesis of a variety of UAA's and is easily accessible using a two-step synthetic route.7 Synthesis of this complex is literature-precedented in high yield.6 Our results described below demonstrate the applicability of hydrolysis conditions utilizing EDTA at mildly acidic to neutral pH conditions appropriate for use with UAA's bearing acid-labile side-chain protecting groups. Following hydrolysis, the resulting aqueous solution can be isolated and subjected immediately to standard Fmoc protection conditions to afford an Fmoc-protected amino acid (Figure 2).

We hypothesized that removal of the Ni2+ from the Ni-PBP-Gly complex could allow an efficient aqueous hydrolysis of the Schiff-base without the need for harsh pH conditions. As EDTA is an inexpensive and well-studied chelating agent,10 we hypothesized that addition of EDTA to a solution of Ni-PBP-Gly would facilitate chelation of Ni2+ ions, thereby promoting hydrolysis of the complex.

To test our theory that EDTA alone could effectively promote hydrolysis of the complex, we subjected a solution of Ni-PBP-Gly in DMF at room temperature to increasing equivalents of EDTA in pH 4.5 aqueous solution, the unadjusted pH of aqueous EDTA disodium salt solution. Progress of the hydrolysis reaction can be monitored by the observing the color of the solution; unreacted Ni-PBP-Gly in solution displays a deep red color while PBP isolated from this complex is white. We tracked the progress of the hydrolysis reaction by monitoring the color change of solution from red to white (Table 1). Reactions involving fewer than eight equivalents showed some transition of coloring from red to white, but the reaction was incomplete in each case. No color change was evident for conditions without EDTA.

The effect of pH on hydrolysis was similarly assessed. Subjection of the Ni-PBP-Gly complex to hydrolysis conditions using 12 equivalents of EDTA overnight with varying pH at room temperature showed successful hydrolysis of the complex occurs under pH conditions ranging from 4.5 to 7.5. This demonstrates the flexibility of EDTA hydrolysis; pH can be increased to account for more acid-sensitive side-chain protecting groups.

To verify that hydrolysis was complete using the most efficient condition, 7, we extracted the reaction three times with dichloromethane, combined and dried the organic layers and analyzed the resulting residue using nuclear magnetic resonance spectroscopy (NMR). The NMR spectrum showed no evidence of Ni-PBP-Gly in the sample; the only resonances found in the spectrum matched literature reports of PBP, suggesting complete hydrolysis of the complex.

We examined the feasibility of our optimal hydrolysis conditions with amino acids containing a range of side-chain protecting groups. Samples of Fmoc-L-glutamic acid 5-tert-butyl ester (Fmoc-Glu(tBu)-OH),Fmoc-O-tert-butyl-L-threonine (Fmoc-Thr(tBu)-OH),Fmoc-O-tert-butyl-L-tyrosine (Fmoc-Tyr(tBu)-OH), andN(in)-Boc-Nα-Fmoc-L-tryptophan (Fmoc-Trp(Boc)-OH) were dissolved in DMF and subjected to hydrolysis at room temperature using 12 equivalents of EDTA at pH 4.5. After being allowed to stir overnight, the solutions were extracted with dichloromethane and analyzed by NMR. A representative NMR is included for Fmoc-Glu(tBu)-OH (Figure 3). In each case, spectral data showed full retention of side-chain protecting groups.11,12,13 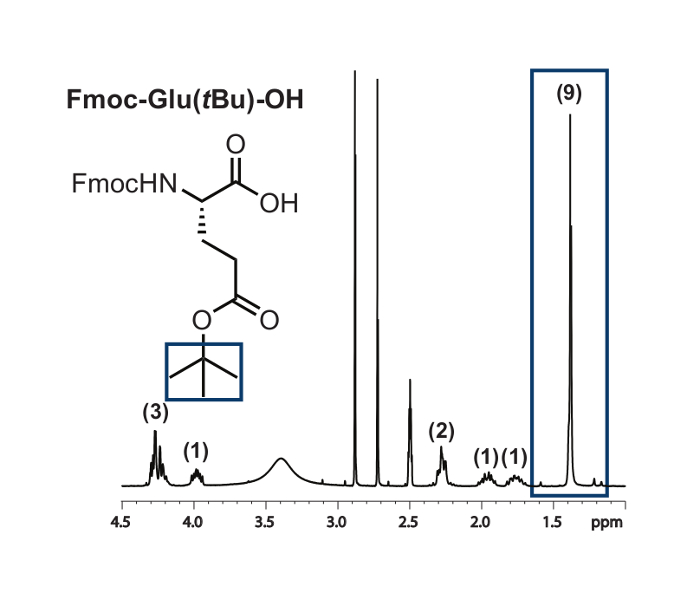 Figure 3: Representative NMR of an Fmoc-monomer Bearing an Acid-labile Side-chain Protecting Group after Subjection to Hydrolysis Conditions.
The acid-labile side-chain protecting group is highlighted with a blue box. Rounded integration values for the proton signals of this compound are included in parentheses. Please click here to view a larger version of this figure.

After hydrolysis and organic extraction, the remaining aqueous layer contains the free amino acid along with residual EDTA and Ni2+ ions. To ensure that the presence of these substances would not interfere with subsequent Fmoc protection of the free amino acid, we performed a test reaction by dissolving glycine in an aqueous solutions containing EDTA and Ni2+ ions with concentrations similar to hydrolysis entry 7. We then subjected this solution to a standard aqueous Fmoc protection.8 After reaction completion and work-up, we determined the reaction afforded a 25% yield of Fmoc-protected glycine. This percent yield is not surprising considering the dilute concentration of the reaction and suggests that the presence of Ni2+ ions and EDTA do not interfere with a standard Fmoc protection reaction.

With evidence supporting that each individual component of our methodology (hydrolysis, isolation of free amino acid, and Fmoc protection) is feasible, we performed a proof-of-concept experiment using Ni-PBP-Gly. We assessed the viability of the hydrolysis conditions described above and subsequent Fmoc protection using a standard protocol8 to afford an Fmoc-protected amino acid in reasonable yield. To a stirred solution of Ni-PBP-Gly (404 mg, 0.971 mmol, 1 equiv) in 40 mL DMF at room temperature was added 0.2 M EDTA solution at pH 4.5 (65 mL, 13 mmol, 13 equiv). The reaction was allowed to stir overnight and then washed four times with dichloromethane. The aqueous layer was then adjusted to pH 7 using solid sodium bicarbonate. To the aqueous layer was added sodium bicarbonate (163 mg, 1.93 mmol, 2 equiv) and Fmoc-OSu (327 mg, 0.971 mmol, 1 equiv) dissolved in a minimal amount of dioxane. The reaction was allowed to stir overnight and then acidified with 1 M hydrochloric acid and extracted three times with ethyl acetate. The organic extracts were combined, washed six times with brine, concentrated, dried with magnesium sulfate, and dried under vacuum to afford a mixture of unreacted Fmoc-OSu and Fmoc-Gly-OH (160 mg, 0.540 mmol, 54% yield). Spectral data matched previously published spectra for Fmoc-Gly-OH.9 This final experiment indicates that it is feasible to isolate free glycine from the Ni-PBP-Gly complex and carry it forward to its Fmoc-protected form.

The protocol described above is useful in its ability to facilitate the isolation of an amino acid backbone from a Ni-Schiff-base complex under mild pH conditions and subsequent Fmoc protection of this isolated amino acid through two critical steps. The first step involves stirring a DMF/water solution containing EDTA to facilitate release of the amino acid from the complex. Residual complex or organic byproducts can easily be removed with extraction. The second step of this protocol involves an Fmoc protection of the amino acid found in the aqueous layer after isolation by extraction in the first step. We have demonstrated the ability to modify this procedure in a pH range of 4.5-7.5, allowing significant flexibility which may be necessary for some pH-sensitive side-chain protecting groups.

One potential limitation of this technique is the low reaction concentration of the Fmoc protection of the isolated amino acid. As facilitating efficient hydrolysis requires several equivalents of EDTA relative to substrate, the reaction conditions require a significant amount aqueous EDTA solution (60 mL for a 1 mmol-scale reaction). Using this volume of solvent in an Fmoc protection results in a relatively low (~0.015 M) concentration of reagents. While a proof-of-concept reaction using these conditions afforded product in a promising 55% yield despite the dilute reaction conditions, it may be necessary to increase this concentration when utilizing amino acids with reduced nucleophilicty relative to glycine resulting from increased steric bulk.

In summary, we have demonstrated the utility of EDTA to foster hydrolysis of a Ni-Schiff base complex typically used for synthesis of UAA's. These hydrolysis conditions do not require the strongly acidic condition typical to these hydrolyses, allowing for retention of acid-labile side-chain protecting groups. Future experiments should focus on applying this general strategy to a variety of unnatural amino acid substrates. Work towards this end is ongoing. 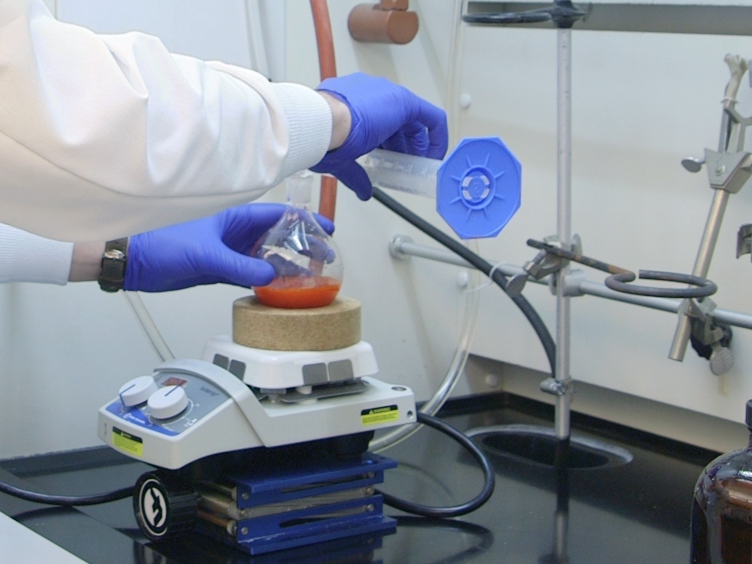