We describe a technique for combining flow cytometry and high throughput sequencing to identify late replicating regions of the genome.

Numerous techniques have been developed to follow the progress of DNA replication through the S phase of the cell cycle. Most of these techniques have been directed toward elucidation of the location and timing of initiation of genome duplication rather than its completion. However, it is critical that we understand regions of the genome that are last to complete replication, because these regions suffer elevated levels of chromosomal breakage and mutation, and they have been associated with both disease and aging. Here we describe how we have extended a technique that has been used to monitor replication initiation to instead identify those regions of the genome last to complete replication. This approach is based on a combination of flow cytometry and high throughput sequencing. Although this report focuses on the application of this technique to yeast, the approach can be used with any cells that can be sorted in a flow cytometer according to DNA content.

Eukaryotic genome replication is initiated at multiple discrete sites, called origins of replication, from which replication forks proceed in both directions (reviewed in Fragkos et al., 20151). Origins vary in both their timing and efficiency of firing, and several techniques have been developed to monitor replication origin activity and elucidate the causes of this variation. The activity of individual origins can be inferred from levels of single-stranded DNA2, which forms around active origins, or by using 2D gel electrophoresis to monitor specific replication intermediates3, both of which can be detected with radioactive probes. Both of these techniques are more easily applied in S. cerevisiae than in mammalian cells, because origins are limited to specific known sequences in the former. With the advent of microarrays, it became possible to assess origin firing globally. This was first done by labeling DNA with heavy isotopes, releasing cells from a G1 block into medium containing light isotopes, and then monitoring the formation of heavy-light hybrid DNA across the genome4. The introduction of high throughput sequencing allowed similar genome-wide monitoring of origin activity without the requirement of expensive isotopic labeling. Cells were sorted in a flow cytometer according to DNA content and their DNA subjected to deep sequencing. Because sequence coverage proceeds from 1x to 2x over the course of S phase, relative replication timing can be assessed by comparing read depths of cells in S phase to those in G1 or G25,6. These techniques, particularly applied to yeast, led to a deeper understanding of how DNA sequence, chromatin structure, and DNA replication proteins regulate origin timing and efficiency.

Faithful transmission of genetic information during cellular proliferation requires not only successful initiation of DNA replication, which takes place at origins, but also successful completion of replication, which occurs where replication forks meet. Like initiation of replication, the timing of completion of replication varies across the genome with certain regions remaining unreplicated even late in the cell cycle. Such regions may be particularly distant from active replication origins or may contain sequences or chromatin structures that impede DNA polymerases. Late replicating regions can manifest themselves as fragile sites, which are associated with chromosomal breakage and higher mutation rates, and have been implicated in cancer and aging7,8,9. However, despite the importance of proper completion of DNA replication in maintenance of genome stability, our understanding of where and how this takes place has lagged far behind that of replication initiation. And while individual genes whose late replication has been associated with disease have been studied with, for example, qPCR10, global studies directed at elucidating the locations and underlying causes of late replication have been lacking. Here we describe a technique we refer to as "G2 seq" in which we combine flow cytometry with high throughput sequencing to shed light on the completion of genome replication in yeast11. With minor changes, this protocol can be adapted to any cells that can be flow-sorted according to DNA content.

3. DNA Extraction and the Preparation of Sequencing Libraries

NOTE: The following steps are based on "protocol I" in the Yeast Genomic DNA extraction Kit (see Table of Materials).

4. Analysis of Sequencing Data and Generation of Replication Profiles

A specific example of results with G2-seq is shown in Figure 2. We had hypothesized that there would be regions of the genome that replicated particularly late in cells lacking a protein deacetylase called Sir2. Figure 2A shows the progression of data analysis for wild type (blue) and sir2 (red). The raw data (upper rows) contain large spikes, most of which are due to the presence of Ty elements. These spikes are removed by capping read depths at 2.5x the median read depth for each sample (middle rows). The despiked data are then smoothed with a 20 kb sliding window (bottom row). Finally, data are normalized and plotted as ratios to the levels in G1. A typical late-replicating region that appears in the sir2 mutant is highlighted in Figure 2C. 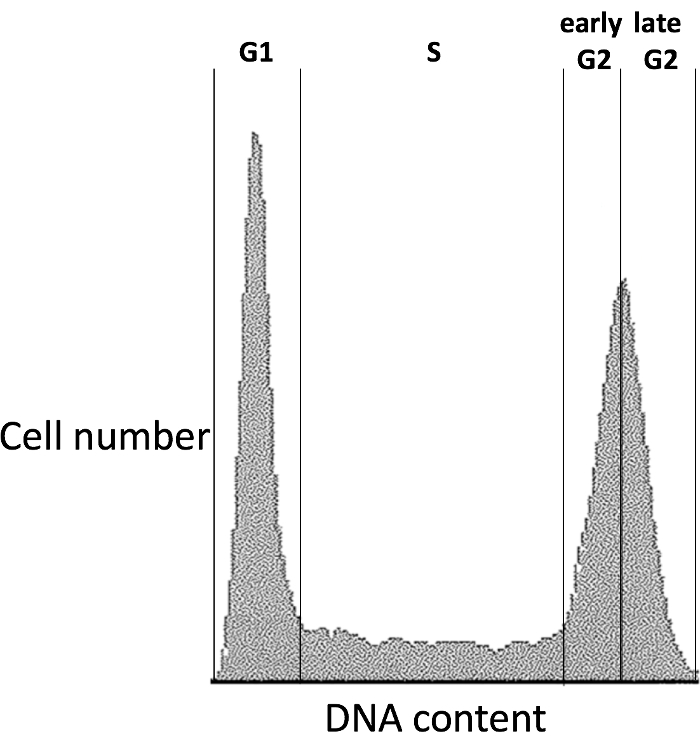 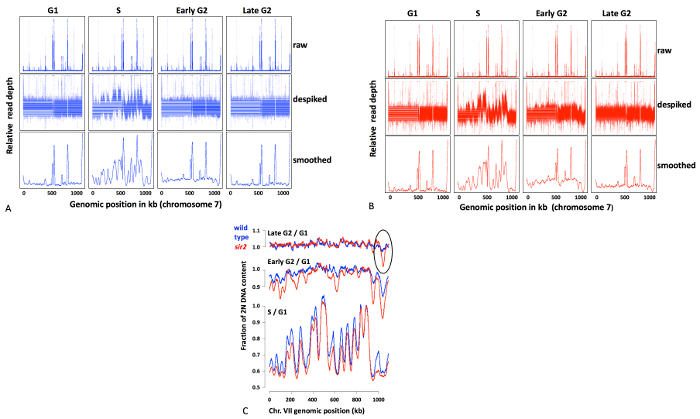 While this technique is robust and relatively straight forward, particular attention should be devoted to the following:

(2) Instead of spinning down the cells before fixing, cells can be also fixed by directly adding 100% ethanol to the yeast culture so that the final concentration of ethanol is 70%. Cells can be grown in either synthetic or rich (YEPD) medium.

(3) Cell cycle phases are visualized for sorting by plotting cell number as a function of 530 nm emission area. We have found that the inflection points between G1 and S and between S and G2 serve as robust landmarks for delineating S phase, and we use the G2 maximum as the boundary to separate early and late G2. We use the terms "early G2" and "late G2" for clarity and brevity, perhaps at the expense of accuracy in the sense that cells are technically in S phase until they have completed DNA replication. Although the goal of G2-seq is to identify very late-replicating sites, which are expected to be revealed in the late G2 fraction, we collect S phase and early G2 cells to follow replication through all phases of the cell cycle.

(4) It is critically important that cells be spun down promptly after sorting. Do not let cells sit overnight before spinning them down. We have had problems recovering cells by centrifugation if they have been stored at 4 °C, suggesting that they become fragile upon sorting and lyse with time.

(5) As few as 5 million reads is sufficient, but plots become less smooth with lower numbers of reads. Data sets with even fewer reads may be able to be accommodated by smoothing with windows larger than 20 kb, but we have not tried this.

(7) High throughput sequencing data from yeast show occasional spikes in read depths, which often reflect Ty elements. We eliminate these by substituting 2.5x median sample read depths for read depths outside of regions known to contain repetitive stretches (e.g., the rDNA) that are greater than 2.5x median. The rDNA and the ends of chromosomes are excluded because they are known to contain repetitive elements. An example of this "despiking" using the R language is the following:

(9) We have experimented with numerous methods to normalize read depths, all of which gave comparable results. Our favored approach is based on the assumption that at least some regions of the genome are fully replicated in our S phase sample. We determined the read depth that represented full replication as the median read depth in our data set at sites corresponding to the 12 earliest firing high confidence ("confidence" score >= 7) origins in a publicly available data set. (http://cerevisiae.oridb.org/data_output.php?main=sc_ori_studies&table=Raghu2001_ori&ext_format=&format=tab). For most applications, the approach taken for normalization is not critical and there are many reasonable options, most simply just normalizing to read count totals. However, it is worth noting that if there are large differences in the numbers of repetitive sequences between samples, normalization to read count totals can be misleading. For example, when comparing two strains whose rDNA arrays differ by several fold, normalizing to total read counts can make certain regions of the genome of the strain with the larger rDNA array artefactually appear to replicate later than the strain with the smaller array.

In summary, G2-seq represents a logical extension of existing techniques for replication profiling. Like other sequencing- and microarray-based techniques, G2-seq has advantages over 2D gel analysis of genome wide coverage and the lack of requirement of knowledge of the location of replication origins. The latter is particularly relevant in mammalian cells where, unlike in budding yeast, replication origins are not limited to specific sequences. On the other hand, 2D gels provide a level of resolution of molecular intermediates in DNA replication completely unattainable by G2-seq. Extending G2-seq to other organisms whose cells can be sorted according to DNA content should be relatively straight forward, however, the highly repetitive nature of the genomes of higher eukaryotes makes alignment of short read sequences much more challenging. Emerging sequencing technologies that provide significantly longer read length may prove useful in this regard, especially since G2-seq should be relatively robust to the higher error rates that can be associated with longer reads17. In our experience, the technical problem that is most likely to cause problems is letting cells sit after they have been sorted and prior to isolation of DNA. These cells appear to be particularly fragile and to lyse with time, and DNA should be isolated within at most an hour or two of sorting. Promising future directions for this technique include dividing both S and G2 phases into increasing numbers of fractions to obtain higher resolution of the dynamics of genome replication, from early initiation to late completion. 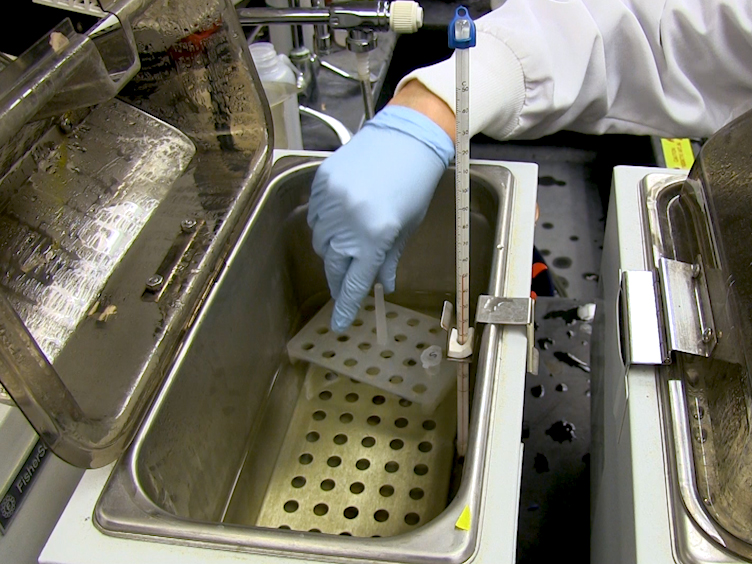