Typical methods for the elucidation of the function of a particular gene involve comparative phenotypic analyses of the wild-type strain and a strain in which the gene of interest has been disrupted. A gene-disruption DNA construct containing a suitable antibiotic resistance marker gene is useful for the generation of gene-disrupted strains in bacteria. However, conventional construction methods, which require gene cloning steps, involve complex and time-consuming protocols. Here, a relatively facile, rapid, and cost-effective method for targeted gene disruption in Streptococcus mutans is described. The method utilizes a 2-step fusion polymerase chain reaction (PCR) to generate the disruption construct and electroporation for genetic transformation. This method does not require an enzymatic reaction, other than PCR, and additionally offers greater flexibility in terms of the design of the disruption construct. Employment of electroporation facilitates the preparation of competent cells and improves the transformation efficiency. The present method may be adapted for the generation of gene-disrupted strains of various species.

Gene function analysis typically involves a phenotypic comparison between a wild-type strain and a strain in which a particular gene of interest has been disrupted. This gene-disruption technique has been utilized for gene function analyses in a wide range of taxa, from bacteria to mammals. A gene-disruption construct is necessary for the generation of the gene-disrupted strain; this deoxyribonucleic acid (DNA) construct consists of the antibiotic resistance marker gene fused to the upstream and downstream flanking regions of the target gene, and is incorporated into the genome via homologous recombination. The gene-disrupted strain may be isolated using selective media containing the antibiotic. The conventional method used for the construction of the gene-disrupted strain requires complex steps, such as the amplification of the target gene by polymerase chain reaction (PCR), ligation of the gene into a suitable plasmid, digestion with restriction enzymes, and religation to insert the antibiotic-resistance marker gene. This process is time-consuming, taking several days to several weeks, depending on the success of each step. In addition, the design of disruption constructs is dependent on the restriction enzyme sites of the target gene. To resolve these issues, PCR-based DNA splicing methods1,2 for the design of gene-disrupted mutants of Dictyostelium discoideum3 and Synechocystis sp. PCC68034 have been reported. In the present study, a method was developed to generate a gene-disrupted streptococcal strain in a relatively rapid, facile, and inexpensive manner, utilizing a modified PCR-based method (designated 2-step fusion PCR) for the construction of the disruption construct and electroporation for genetic transformation.

The 2-step fusion PCR requires genomic DNA, the antibiotic resistance marker gene as a PCR template, and four pairs of appropriately designed oligonucleotide primers. In the first step (1st PCR), a 1-kb upstream flanking region of the target gene, a 1-kb downstream flanking region of the target gene, and the antibiotic-resistance marker gene are amplified by PCR. The 5' regions of both the reverse primer and the forward primer, for amplification of the upstream and downstream flanking regions, respectively, include 15 bases complementary to the ends of the marker gene. The 5' regions of both forward and reverse primers for marker gene amplification similarly include 15 bases complementary to the lower end of the upstream flanking region of the target gene and the upper end of the downstream flanking region of the target gene, respectively. Therefore, the three amplified fragments contain overlapping 30-base pair regions at the fusion site. In the second step (2nd PCR), PCR is performed with nested PCR primers using the three fragments amplified by the 1st PCR as templates. The complementary regions of the templates are additionally linked to each other via the 2nd PCR. Finally, the construct for homologous recombination is introduced to the wild-type strain by electroporation. Successful gene disruption may be verified by PCR using specific primers. Although the disruption construct is amplified using high-fidelity DNA polymerase, additional enzymatic reactions, such as DNA ligation or DNA digestion, are not necessary to generate the construct. In addition, a deleted or preserved region on the genome may be flexibly chosen according to primer design.

In the present work, deletion of the entire coding region of the gtfC gene, which encodes glucosyltransferase in Streptococcus mutans, was performed to demonstrate the rapid, easy gene disruption method in a streptococcal species. Additionally, a gtfB-disrupted strain was generated in the same manner. The glucosyltransferases encoded by both gtfC and gtfB contribute to cariogenic dental biofilm development5,6. The biofilm-forming abilities of the wild-type strain (S. mutans WT), gtfC-disrupted strain (S. mutans ΔgtfC), and gtfB-disrupted strain (S. mutans ΔgtfB) were evaluated for comparative phenotypic analyses. This protocol extends the application of a two-step method for gene disruption to an additional species and may be modified for studies of gene function in a wider range of taxa.

5. Verification of Gene Disruption and Storage 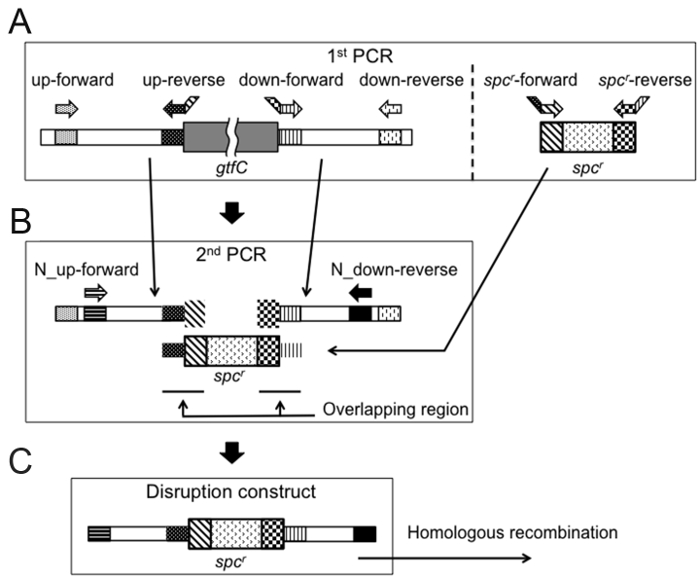 Figure 1:Strategy for 2-step fusion PCR. A schematic illustration of S. mutans ΔgtfC construction is shown. The gene lengths are not to scale. (A) Upstream and downstream flanking regions of the gtfC and spcr loci were amplified by PCR. The primer binding sites in the template are indicated by identical patterns. (B) The second PCR step was performed using (as templates) the 3 fragments that were amplified in the first PCR step with nested primers. (C) The disruption construct was obtained for homologous recombination in the bacterial strains. Please click here to view a larger version of this figure. 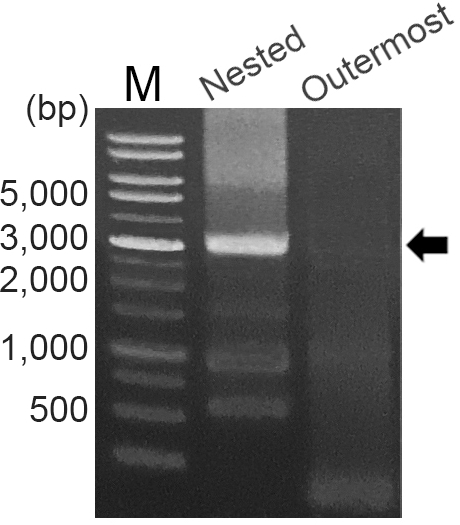 Figure 3: Representative gel electrophoresis of products from the 2nd PCR. Products amplified with the nested primers and the outermost primers are shown. The solid arrow indicates the predicted size of the disruption construct. M: molecular marker. 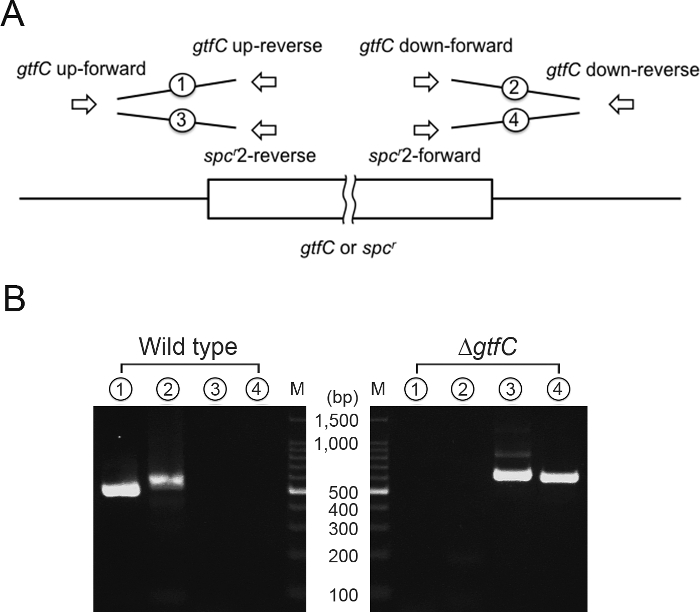 In the present protocol, the primers for the 1st PCR must be designed to amplify approximately 1 kb upstream and downstream flanking regions of the target region in the genome. Such long flanking sequences are necessary to improve the efficiency of homologous recombination.

The sequences of the primers (up-reverse, down-forward, spcr-forward, and spcr-reverse) in this protocol were automatically determined based on the site of incorporation of the disruption construct. Each primer includes 15 bases complementary to the end of the 2nd PCR template at the 5' region. A longer binding site enables more efficient production of the disruption construct. Inclusion of at least 10 complementary bases at the 5' region of each primer is recommended9.

Colony PCR enables convenient screening of the gene-disrupted strain. Primers of known sequences may be applied for the generation of the gene-disrupted strain using spcr. Electroporation was used for the introduction of disruption constructs into S. mutans WT, as the transformation efficiency achieved using electroporation is generally higher than that enabled by other procedures. Transformation using horse serum, or horse serum with competence-stimulating peptides, is widely accepted in Streptococcus10,11,12. Although an electroporation apparatus is required, the procedures involved, such as competent cell preparation, are much simpler than those in alternative methods10,11. In addition, electroporation is recommended from the point of view of animal welfare.

The present protocol is applicable to multiple gene disruption, depending on the number ofantibiotic markers. To generate both gtfC- and gtfB-disrupted S. mutans strains, for example, the DNA construct for gtfC-disruption constructed by 2-step PCR may be transformed into S. mutans ΔgtfB. Because gtfC and gtfB are adjacent in this case, S. mutans ΔgtfC and S. mutans ΔgtfB genomes must be used as templates for 2-step PCR to maintain the homologous sequences for homologous recombination. In fact, double gene-disrupted S. mutans strain was previously constructed by this protocol9.

The present protocol for gene disruption in S. mutans may be adapted for the generation of gene-disrupted strains of various species. This protocol does not require the gene cloning step involved in conventional protocols. In addition, PCR is the only required enzymatic reaction; therefore, plasmid vectors, Escherichia coli, ligase, and restriction enzymes are not necessary. Furthermore, the present protocol offers greater flexibility in terms of design of the disruption construct, as the construct design is independent of restriction enzyme sites of the target gene. Researchers may determine regions that are deleted or preserved in the genome to design the reverse primer for amplification of the upstream flanking regions and the forward primer for amplification of the downstream flanking regions. These flanking regions are immediately upstream and immediately downstream of the region of DNA desired for deletion, respectively. Such flexibility may be used to decrease external influences, such as polar effects, on the expression of proximate genes. 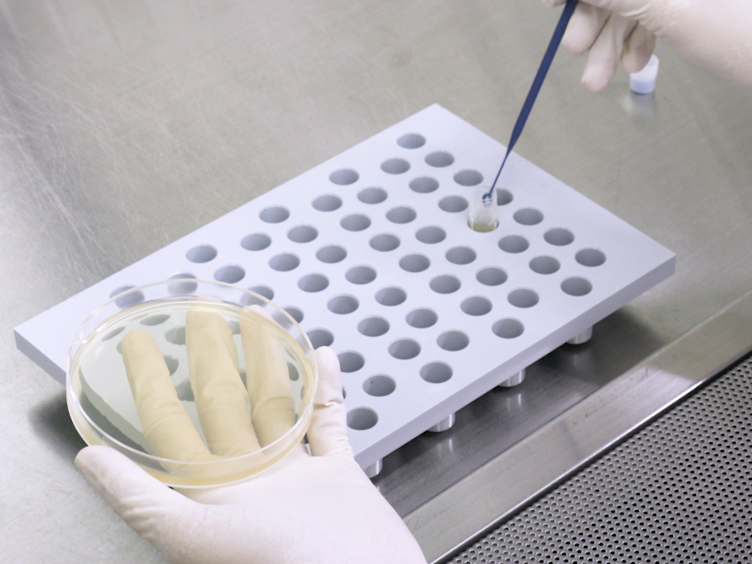