Research on ionizing radiation (IR)-induced clonogenic cell death is important for understanding the effects of IR on malignant tumors and normal tissues. Here, we describe a one-step assay for assessing the major modes of IR-induced clonogenic cell death based on morphology of 4',6-diamidino-2-phenylindole dihydrochloride (DAPI)-stained nuclei visualized by fluorescence microscopy.

Research on ionizing radiation (IR)-induced clonogenic cell death is important for understanding the effect of IR on malignant tumors and normal tissues. Here, we describe a quick and cost-effective one-step assay for simultaneously assessing the major modes of clonogenic cell death induced by IR, i.e., apoptosis, mitotic catastrophe, and cellular senescence. In this method, cells grown on a cover slip are irradiated with X-rays and stained with 4',6-diamidino-2-phenylindole dihydrochloride (DAPI). Using fluorescence microscopy, apoptosis, mitotic catastrophe, and cellular senescence are identified based on the characteristic morphologies of the DAPI-stained nuclei. Apoptosis is determined by the presence of apoptotic bodies (i.e., condensed and fragmented nuclei). Mitotic catastrophe is determined by the presence of nuclei that exhibit two or more distinct lobes and micronuclei. Cellular senescence is determined by the presence of senescence-associated heterochromatic foci (i.e., nuclear DNA containing 30-50 bright, dense foci). This approach allows the experimenter to easily screen for clonogenic cell death modes using various cell lines, treatment settings, and/or time points, with the goal of elucidating the mechanisms of cell death in the target cells and conditions of interest.

Various cell-based assays have been developed to individually assess apoptosis, mitotic catastrophe, and cellular senescence. Apoptosis can be assessed by terminal deoxynucleotidyl transferase dUTP nick-end labeling (TUNEL) staining, annexin V staining, DNA fragmentation assays, and sub-G1 cell-cycle phase determination by flow cytometry1. Mitotic catastrophe can be assessed by immunofluorescence staining for mitotic markers, including MPM2, TUNEL staining, and electron microscopy1. Cellular senescence can be assessed by senescence-associated β-galactosidase (SA-β-Gal) staining, growth-arrest assays, and electron microscopy1. Importantly, the predominant mode of clonogenic cell death differs among cell lines and treatment settings3,4. Therefore, to elucidate the overall profile of clonogenic cell death for a given experimental setting, multiple assays covering all of these modes of death must be conducted together, which is labor- and cost-intensive.

In this article, we describe a quick and cost-effective one-step assay for simultaneously assessing apoptosis, mitotic catastrophe, and cellular senescence induced by IR3,4. In this method, cells grown on a cover slip are irradiated with X-rays and stained with 4',6-diamidino-2-phenylindole dihydrochloride (DAPI). Using fluorescence microscopy, apoptosis, mitotic catastrophe, and cellular senescence are each identified based on the respective characteristic morphologies of the DAPI-stained nuclei. This approach will be useful for applications including screening for clonogenic cell death profiles in various cell lines, treatment settings, and time points, with the goal of investigating the mechanisms of cell death in the target cells and conditions of interest.

NOTE: These procedures should be performed in a culture hood.

CAUTION: Handle the X-ray irradiator carefully according to the manufacturer's instructions.

As an example, U2OS human osteosarcoma cells were treated with 6 Gy X-rays, incubated for 72 h, and subjected to the DAPI staining assay according to the protocol. Figure 1 shows zoomed images for the typical nuclear morphologies associated with apoptosis, mitotic catastrophe, and cellular senescence obtained using a 60× oil lens. Refer to steps 7.1.1-7.1.3 for the characteristic morphologies for each mode of clonogenic cell death. Figure 2 shows overview images of nuclei obtained using a 20X lens. Irradiation with 6 Gy X-rays induced mitotic catastrophe frequently, apoptosis less frequently, and cellular senescence rarely. In this manner, examination at a low-magnification field allows one to apprehend at a glance the overall picture of the clonogenic cell death profile in a given experimental setting. Figure 3 shows a graphical representation of the quantified data. 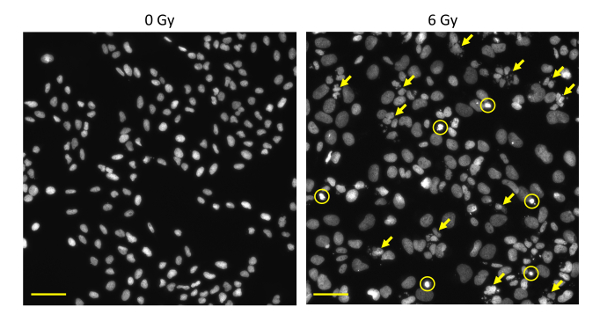 Figure 2: Overview images of DAPI-stained nuclei of cells treated with X-rays. U2OS cells were irradiated with 6 Gy X-rays or mock-irradiated. After 72 h, the cells were fixed and stained with DAPI. Images of nuclei were acquired using a 20X lens. Circles, apoptosis; arrows, mitotic catastrophe. Scale bar = 50 μm. Please click here to view a larger version of this figure. 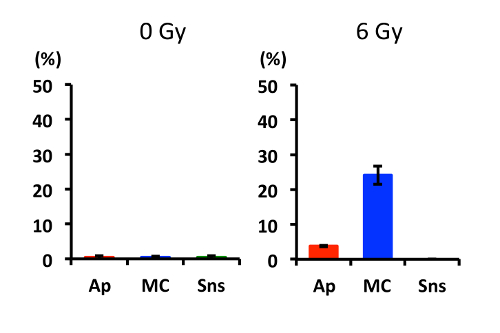 Figure 3: Quantified data for apoptosis, mitotic catastrophe, and cellular senescence induced in cells treated with X-rays. U2OS cells were irradiated with 6 Gy X-rays or mock-irradiated. After 72 h, the cells were fixed and stained with DAPI. Images of nuclei were acquired using a 20X lens. From random fields, a total of 300 nuclei were evaluated for apoptosis (Ap), mitotic catastrophe (MC), and cellular senescence (Sns). The evaluations were performed in triplicate. Average values are shown, and error bars indicate standard deviations. Please click here to view a larger version of this figure.

The critical steps within the protocol are as follows. First, cells should be grown on the culture dish as a monolayer because conducting a morphological assessment of DAPI-stained nuclei is difficult for multilayered cells. To this end, in step 2.9, careful transfer of the culture dish to an incubator is recommended; shaking of the culture dish generates a swirl of suspended cells that leads to the concentration of cells at the center of the culture dish. In addition, overconfluence leading to multilayered cells should be avoided. To this end, in step 2.7, the number of cells seeded on the culture dish can be modified based on the population doubling time and the interval between irradiation and fixation. A confluence of approximately 80 at the time of fixation is recommended. Second, speed is important in fixation and DAPI staining (i.e., steps 4 and 5). Inter-sample inconsistency in regard to the time taken for these steps can lead to heterogeneity in DAPI signal intensity in the nuclei, which would obscure the morphological assessment.

In step 3.3, the time from irradiation to fixation can be modified according to the researchers' interest; this is important because the peak time for IR-induced apoptosis, mitotic catastrophe, and cellular senescence varies according to cell line and treatment. In this article, we used 72 h after irradiation as the time point that would be most useful for the initial screening of clonogenic cell death profiles, based on multiple studies by our group and others described as follows1,2,3,4,8,9: (i) X-ray-induced apoptosis in cells established from solid tumors mostly occurs a few days after irradiation. (ii) X-ray-induced mitotic catastrophe in cancer cells occurs most prominently at the second or third mitosis after release from the temporary cell-cycle arrest induced by irradiation. The release usually occurs approximately 24 h after irradiation, followed by repeated mitoses at intervals of approximately 24 h. (iii) X-ray–induced cellular senescence becomes evident after an interval dependent upon the cell line in question: 2 days after irradiation for some early cases, and 7 days after irradiation for most cell lines. After obtaining an overall picture of the clonogenic cell death profiles from the initial screening, time course experiments will provide a more detailed elucidation of the peak time for each mode of clonogenic cell death in the specific cell line and/or condition of interest4.

In summary, the DAPI staining assay is a cost-effective one-step assay to simultaneously assess the three major modes of IR-induced clonogenic cell death. This approach allows one to easily screen for the modes of clonogenic cell death for various cell lines, treatment settings, and time points, with the goal of elucidating the mechanisms of cell death in the target cells and conditions of interest.

We thank Mrs. Akiko Shibata for technical assistance. This work was supported by Grants-in-Aid from the Ministry of Education, Culture, Sports, Science, and Technology of Japan for programs for Leading Graduate Schools, Cultivating Global Leaders in Heavy Ion Therapeutics and Engineering. 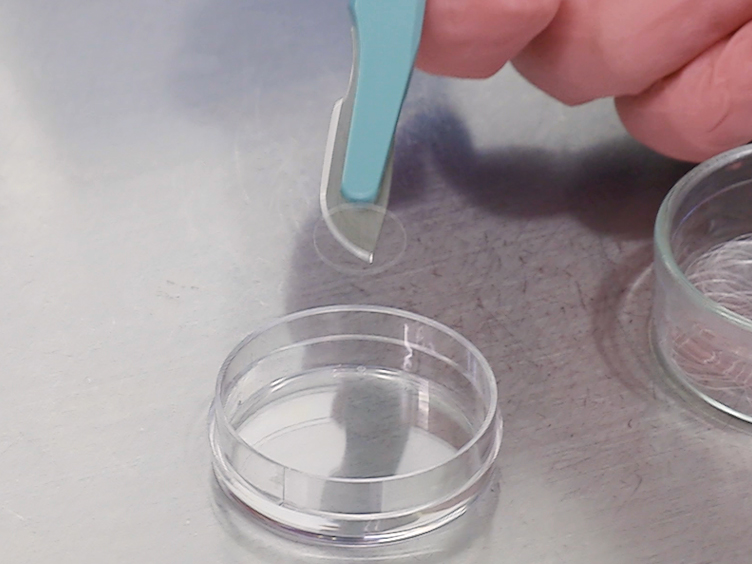