Here, we describe methods to perform ChIP-Seq and CARIP-Seq, including library preparation for next-generation sequencing, to generate global epigenomic and chromatin-associated RNA maps in ES cells.

Embryonic stem (ES) cell self-renewal and differentiation is governed by extrinsic signals and intrinsic networks of transcription factors, epigenetic regulators, and post-translation modifications of histones that combinatorially influence the gene expression state of nearby genes. RNA has also been shown to interact with various proteins to regulate chromatin dynamics and gene expression. Chromatin-associated RNA immunoprecipitation (CARIP) followed by next-generation sequencing (CARIP-Seq) is a novel method to survey RNAs associated with chromatin proteins, while chromatin immunoprecipitation followed by next-generation sequencing (ChIP-Seq) is a powerful genomics technique to map the location of post-translational modification of histones, transcription factors, and epigenetic modifiers on a global-scale in ES cells. Here, we describe methods to perform CARIP-Seq and ChIP-Seq, including library construction for next-generation sequencing, to generate global chromatin-associated RNA and epigenomic maps in ES cells.

Embryonic stem (ES) cell fate decisions are regulated by communication between extracellular signals and a host of transcriptional-regulators, including histone modifiers, and post-translation modification of histone tails. These interactions facilitate chromatin accessibility and packaging of chromatin into one of two states: euchromatin, which is open and transcriptionally active, and heterochromatin, which is compact and generally transcriptionally inactive. Transcription factors with DNA sequence-specific binding affinities and epigenetic modifiers associate with euchromatic regions to participate in controlling gene expression. Next-generation sequencing methods, including ChIP-Seq1, have been instrumental in mapping genome-wide transcriptional networks that are fundamental for ES cell self-renewal and pluripotency2,3,4,5,6. Moreover, while RNA immunopreciation followed by next-generation sequencing (RIP-Seq)7 evaluations of RNA-protein interactions suggest that DNA binding proteins interact with RNAs to regulate transcriptional events7,8,9,10,11,12, few studies have investigated the genome-wide localization of RNAs associated with chromatin12, or global interactions between RNA and histone modifications. Long non-coding RNAs (lncRNAs) are one class of RNAs which have been found to regulate the activity of chromatin-associated proteins13,14,15. For example, Xist is a lncRNA that regulates, in female mammalian cells, inactivation of one X chromosome, through the recruitment of epigenetic repressors16,17. However, the full spectrum of RNAs associated with chromatin is largely unknown. Here, we describe a novel protocol, chromatin-associated RNA immunoprecipitation (CARIP) followed by next-generation sequencing (CARIP-Seq), to identify chromatin-associated RNAs on a genome-wide basis in ES cells, including library preparation for next-generation sequencing, and ChIP-Seq to map global occupancy of histone modifications, transcription factors, and epigenetic modifiers. Unlike other RIP-Seq methods7, CARIP-Seq includes crosslinking and sonication steps, which allow for the direct identification of RNAs associated with chromatin. Together, ChIP-Seq is a powerful tool to identify genome-wide protein-DNA interactions, while CARIP-Seq is a powerful method to survey RNAs associated with chromatin components.

NOTE: Mouse ES cells are conventionally cultured in media on a cell culture dish coated with gelatin and a mono-layer of mouse embryonic fibroblasts (MEF), which have been mitotically inactivated (iMEFs). However, MEFs should be removed prior to downstream epigenetic or expression analyses to prevent the contamination of MEF-associated chromatin and RNA.

2. Crosslinking of ES Cells for ChIP and CARIP

3. Chromatin sonication for ChIP and CARIP

We successfully interrogated the genome-wide binding of H3K4me3, H3K4me2, and KDM5B in ES cells using this ChIP-Seq protocol6. ES cells were cultured in feeder-free conditions (Figure 1), and cross-linked as described above. Sonication was subsequently performed as described in step 3.2 of the ChIP-Seq protocol, and evaluated by running DNA on a 2% agarose gel (Figure 2). Next, ChIP was performed as described in step 4 and library preparation was performed as described in step 6. ChIP-Seq libraries were sequenced on a next-generation sequencing platform. Representative custom UCSC browser views reveal enrichment of H3K4me3, H3K4me2, and KDM5B at the core pluripotency gene POU5F1 (Figure 3A), and at the HOXC cluster (Figure 3B). CARIP-Seq was also performed by following the protocol as described in steps 4-6. A representative UCSC browser view reveals enrichment of H4K20me3-associated RNA (CARIP-Seq) and H4K20me3 occupancy (ChIP-Seq) at a loci in ES cells (Figure 4). The CARIP-Seq signal demonstrates that while the RNA is associated with H4K20me3, it does not necessarily indicate that it interacts with the locus shown. CARIP-Seq datasets can be analyzed in a similar way as ChIP-Seq datasets. Data generated from mouse ES cell CARIP-Seq and ChIP-Seq experiments can both be aligned to a reference genome (e.g., mm9, mm10) using bowtie221. ChIP-Seq and CARIP-Seq enriched regions can both be identified using peak calling programs such as "Spatial Clustering for Identification of ChIP-Enriched Regions" (SICER)22 or MACS23,24. Because CARIP-Seq datasets likely include broad peaks, it is important to use an algorithm that can identify broad and sharp peaks. While the protocols described in this manuscript have been optimized for performing ChIP-Seq and CARIP-Seq using ES cells, these protocols should also be suitable for evaluating protein-DNA and chromatin-associated RNA interactions in other cell types. 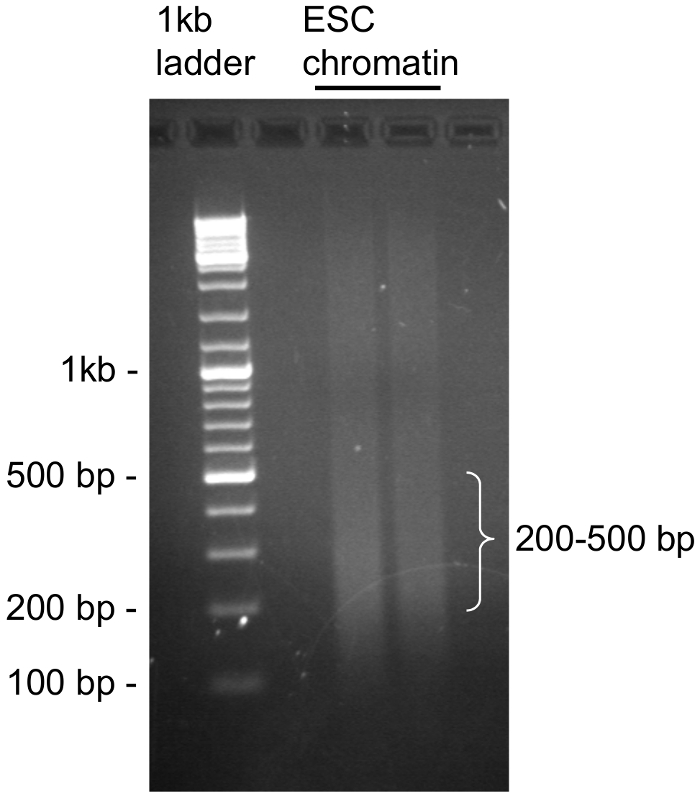 Figure 2: Sonication of crosslinked ES cell chromatin. Crosslinked ES cells were sonicated using a sonifier with a microtip for 18 cycles (40% amplitude, 30 s on, and 30 s rest). Crosslinking was reversed, and RNase digestion was subsequently performed to remove RNA. DNA was purified using PCI and run on an agarose gel (2%). Please click here to view a larger version of this figure. 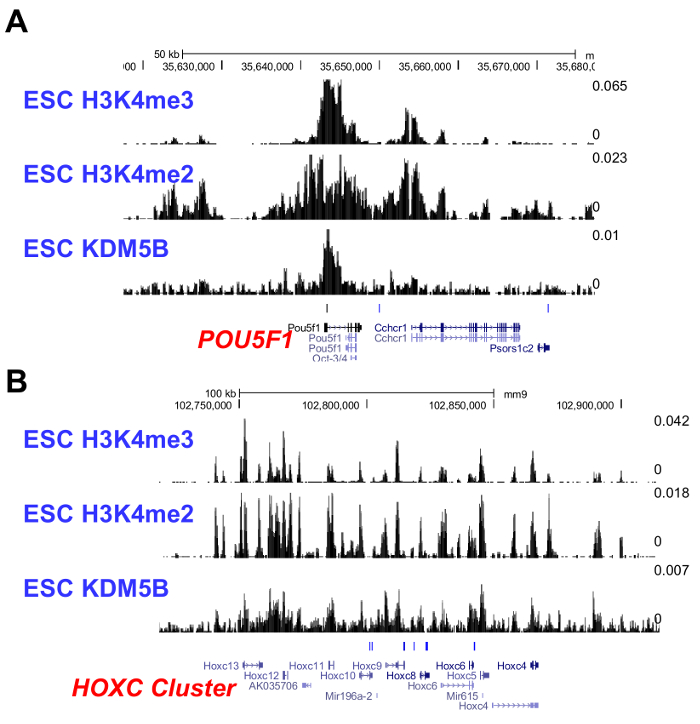 Figure 3: Representative ChIP-Seq analysis of a histone modifying enzyme and histone modifications in ES cells. Custom UCSC browser views of H3K4me3, H3K4me2, and KDM5B at the pluripotency-regulator (A) POU5F1 and the (B) HOXC cluster in ES cells (normalized tag density (RPBM), read per base per million reads). Note the overlap between KDM5B binding and H3K4me3/2 occupancy. Please click here to view a larger version of this figure. 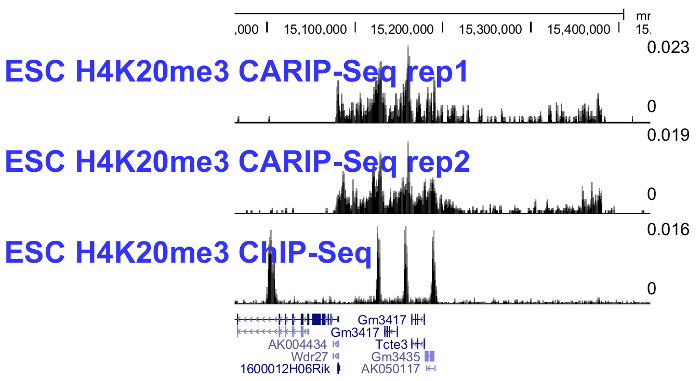 Figure 4: Representative CARIP-Seq analysis of RNA associated with a histone modification and ChIP-Seq in ES cells. UCSC browser views of H4K20me3 CARIP-Seq and H4K20me3 ChIP-Seq signals in ES cells (normalized tag density (RPBM), read per base per million reads). Please click here to view a larger version of this figure.

ChIP-Seq is a useful method to evaluate the location of global protein-DNA interactions (e.g., transcription factors/histone modifying enzymes/histone modifications and DNA) in ES cells, while the newly developed CARIP-Seq protocol is useful in interrogating genome-wide association of RNAs with chromatin constituents. ChIP-Seq is a fundamental tool that is used to evaluate epigenetic landscapes of ES cells and other cell types. The quality of ChIP-Seq and CARIP-Seq libraries is largely dependent on ChIP-grade antibodies. The suitability of antibodies for ChIP-Seq can be empirically determined by performing ChIP-PCR, where a ≥ 3 to 5-fold enrichment at positive control regions relative to unoccupied regions should be sufficient to generate high-quality ChIP-Seq data25. Likewise, antibodies can be tested for their suitability for CARIP-Seq in a similar manner as described for ChIP-Seq with minor modifications. Following the RNA IP step in the CARIP protocol as described in the methods section above, reverse-transcription PCR should be performed to generate cDNA, which can be used as a template to perform Q-RT-PCR. It is recommended to evaluate the enrichment following ChIP or CARIP at several genomic regions. There are additional considerations to test when evaluating the quality of antibodies for ChIP or CARIP. For example, the stringency of buffers used for ChIP and CARIP may be optimized by altering the concentration of NaCl: a low NaCl concentration is suitable for highly-specific antibodies, while a high NaCl concentration may be helpful for antibodies with non-specific binding. Regarding the library preparation for next-generation sequencing, custom primers and indexes can also be used in lieu of commercially acquired oligonucleotides. However, it is important to note that including a phosphorothioate modification between two bases at the 3' end has been shown to prevent nuclease digestion26. Third-party RNA-Seq or ChIP-Seq library construction kits may also be used to generate libraries for sequencing of CARIP and ChIP samples, respectively. However, it is important to empirically test the kits to evaluate their efficacy in generating quality libraries for next-generation sequencing. Additional protocols may also be employed to perform ChIP-Seq library preparation, such as ChIPmentation27. However, adaptation of ChIPmentation to the ChIP-Seq protocol described here will require additional modifications and further optimization.

Here, we describe ChIP and CARIP protocols that have been optimized using moderate numbers of cells (4 × 106 cells per IP). While the ChIP protocol can be performed using low to intermediate cell numbers (105 to 106 cells), we have not performed CARIP-Seq using less than 2 × 106 cells. However, by empirically testing various fixation and sonication conditions, it is possible that this protocol may work successfully using a small number of cells.

B.L.K. conceived of the CARIP-Seq method, designed and carried out the ChIP-Seq and CARIP-Seq experiments, analyzed the sequencing data, and drafted the manuscript. All authors have read and approved the final version of this manuscript. 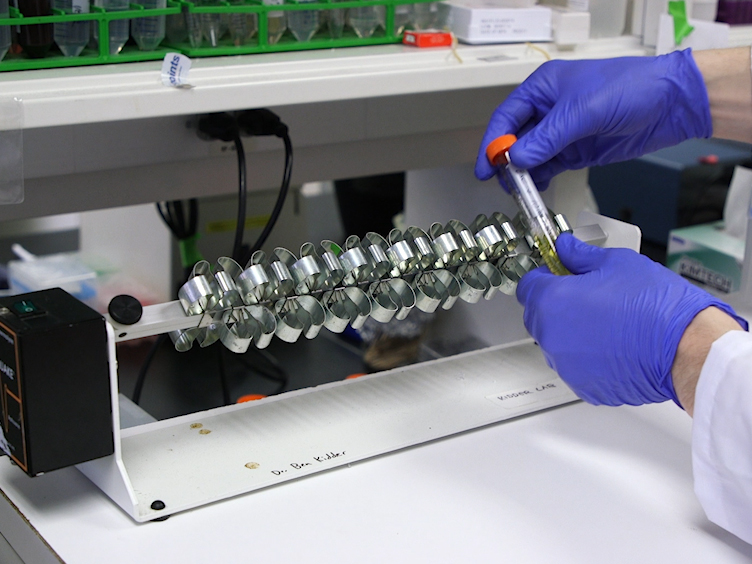