A protocol for in vitro induction of endothelial-mesenchymal transition (EndMT), which is useful for investigating cellular signaling pathways involved in EndMT, is described. In this experimental model, EndMT is induced by treatment with TGF-β in MS-1 endothelial cells.

Phenotypic plasticity of endothelial cells underlies cardiovascular system development, cardiovascular diseases, and various conditions associated with organ fibrosis. In these conditions, differentiated endothelial cells acquire mesenchymal-like phenotypes. This process is called endothelial-mesenchymal transition (EndMT) and is characterized by downregulation of endothelial markers, upregulation of mesenchymal markers, and morphological changes. EndMT is induced by several signaling pathways, including transforming growth factor (TGF)-β, Wnt, and Notch, and regulated by molecular mechanisms similar to those of epithelial-mesenchymal transition (EMT) important for gastrulation, tissue fibrosis, and cancer metastasis. Understanding the mechanisms of EndMT is important to develop diagnostic and therapeutic approaches targeting EndMT. Robust induction of EndMT in vitro is useful to characterize common gene expression signatures, identify druggable molecular mechanisms, and screen for modulators of EndMT. Here, we describe an in vitro method for induction of EndMT. MS-1 mouse pancreatic microvascular endothelial cells undergo EndMT after prolonged exposure to TGF-β and show upregulation of mesenchymal markers and morphological changes as well as induction of multiple inflammatory chemokines and cytokines. Methods for the analysis of microRNA (miRNA) modulation are also included. These methods provide a platform to investigate mechanisms underlying EndMT and the contribution of miRNAs to EndMT.

Endothelial-mesenchymal transition (EndMT) is the process by which a differentiated endothelial cell undergoes a variety of molecular changes, resulting in a fibroblast-like mesenchymal cell1. EndMT was initially described as an endothelial cell transformation during development of the heart2,3. In early heart development, the heart tube consists of an inner endocardium and an outer myocardium. These two layers are separated by a layer of extracellular matrix called the cardiac jelly. The embryonic endocardial cells, which acquire endothelial cell markers, transit into mesenchymal cells, invade the underlying cardiac jelly, and promote formation of the cardiac cushions, providing the foundation for the atrioventricular valves and septum and the semilunar valves. Furthermore, EndMT has been suggested to be sources of pericytes and vascular smooth muscle cells in other embryonic vascular systems including coronary vessels, abdominal aorta, and pulmonary artery4,5,6. In addition, EndMT is implicated in physiological angiogenic sprouting7.

EndMT is characterized by loss of cell-cell junctions, increase in migratory potential, downregulation of endothelial-specific genes such as VE-cadherin, and upregulation of mesenchymal genes including α-smooth muscle actin (α-SMA). In addition, EndMT and epithelial-mesenchymal transition (EMT), a similar process that converts epithelial cells to mesenchymal cells, are associated with altered production of various extracellular matrix components, which may contribute to the development of tissue fibrosis8,19.

Recently, several in vitro studies of EndMT have elucidated details of molecular mechanisms of EndMT15,20. EndMT is induced by various signaling pathways including transforming growth factor (TGF)-β, Wnt, and Notch1. Among them, TGF-β plays pivotal roles in the induction of both EMT and EndMT. In EndMT, prolonged exposure to TGF-β results in EndMT in various endothelial cells, while short exposure appears to be insufficient21. We here described a straightforward protocol for EndMT induction, in which MILE SVEN 1 (MS-1) mouse pancreatic microvascular endothelial cells undergo EndMT in vitro after prolonged exposure to TGF-β20. In this model, multiple downstream analyses can be performed to investigate hallmark features of EndMT, including morphological changes, downregulation of endothelial markers, upregulation of mesenchymal markers and inflammatory genes, cytoskeletal rearrangements, and collagen gel contraction.

MicroRNAs (miRNAs) are ~22 nt small regulatory RNAs that direct posttranscriptional repression of various mRNA targets22,23. Through seed sequence-mediated target recognition, miRNAs suppress hundreds of target genes and modulate diverse cellular functions such as cell differentiation, proliferation, and motility. This is also the case for regulation of EMT and EndMT, and several miRNAs have been reported as regulators of EMT and EndMT24,25. The EndMT model presented in this review can be easily combined with miRNA modulation procedures to test the roles of miRNAs in EndMT. The present review summarizes our experimental procedures to investigate TGF-β-induced EndMT in MS-1 cells and also includes comparison of conditions of EndMT induction by TGF-β in other endothelial cells.

TGF-β is a potent inducer of EndMT in various endothelial cells. After 24 h treatment with TGF-β in MS-1 cells, staining for F-actin shows reorganization of actin stress fibers (Figure 1A)20. Pretreatment with a ROCK inhibitor Y-27632 inhibits the induction of actin reorganization20. MS-1 endothelial cells change from a classical cobblestone-like morphology to a mesenchymal spindle-shaped morphology upon TGF-β treatment (Figure 1B). TGF-β-treated cells lose cell-cell contact. After treatment with TGF-β for 48–72 h, immunocytochemical analyses demonstrate decreased expression of VE-cadherin and increased expression of α-SMA (Figure 1C). TGF-β drastically induces the expression of α-SMA at both mRNA and protein levels in MS-1 cells after 48–72 h of treatment (Figures 1D and 1E). Mammalian TGF-β includes TGF-β1, 2, and 3 isoforms. A previous study using mouse cultured endocardial cushion explants has shown that TGF-β2 but not TGF-β3 is obligatory for transformation of endocardial cushion cells28. On the other hand, we previously compared the effects of three isoforms on α-SMA expression and confirmed that all isoforms similarly induced α-SMA expression in MS-1 cells20. Collagen gel contraction assay shows enhanced contraction of the collagen type I gel by MS-1 cells following TGF-β treatment (Figure 1F). This effect suggests the acquisition of mesenchymal cell capacity to remodel extracellular matrix. These features are hallmark traits of EndMT20. In our previous report20, treatment with a ROCK inhibitor Y-27632 strongly suppressed induction of mesenchymal markers α-SMA and SM22α without concomitant suppression of induction of other TGF-β target genes such as Fibronectin 1 and MMP-2.

EndMT is a highly dynamic process. In MS-1 cells, the effects of TGF-β on α-SMA expression and morphology are reversible; after TGF-β deprivation, α-SMA expression decreases to basal levels (Figure 2A), and cells recover a cobblestone-like morphology (Figure 2B). In addition, induction of EndMT and EMT is associated with dynamic changes in secretory capacity of multiple chemokines and cytokines. Multiple inflammatory chemokines and cytokines including CCL17, CX3CL1, CXCL16, IL-6, and Angptl2 are induced by TGF-β in MS-1 cells, which we previously designated EndMT-associated secretory phenotype (EndMT-SP)26. This experimental model is useful to investigate the putative regulators of EndMT and EndMT-SP. We have previously studied the roles of several miRNAs in EndMT by enhancing or inhibiting miRNA activities26,27. In MS-1 cells, miRNA activities can be robustly modulated by miRNA mimic oligonucleotides or LNA-based miRNA inhibitors, and multiple downstream assays including RNA-seq analysis can be easily performed (Figure 3). Based on integrative transcriptome analysis, we have previously linked constitutively active miR-31 to EndMT regulation in MS-1 cells26. RNA-seq analysis showed that inhibition of miR-31 by LNA miRNA inhibitor results in attenuation of induction of mesenchymal markers (Figure 3A) and EndMT-SP genes (Figure 3C), while it does not affect induction of conventional TGF-β target genes such as Fibronectin 1, PAI-1, and Smad7 (Figure 3B) and downregulation of endothelial markers (Figure 3D)26. Both TGF-β and miR-31 downregulate Stk40, a negative regulator of NF-κB pathway, which acts as a potential regulator of EndMT-SP. Although TGF-β does not increase the expression of miR-31, TGF-β induces alternative polyadenylation-mediated exclusion of internal poly(A) sequence in Stk40 3'UTR, thereby enhancing targeting of Stk40 by constitutive active miR-31 and finally suppressing Stk4026. In addition, we previously examined the roles of TGF-β-inducible miR-27b in EndMT27. Inhibition of miR-27 suppressed upregulation of mesenchymal markers (Figure 3A) while the effects on conventional TGF-β target genes, EndMT-SP genes, and endothelial markers were marginal (Figures 3B, 3C, and 3D)27. 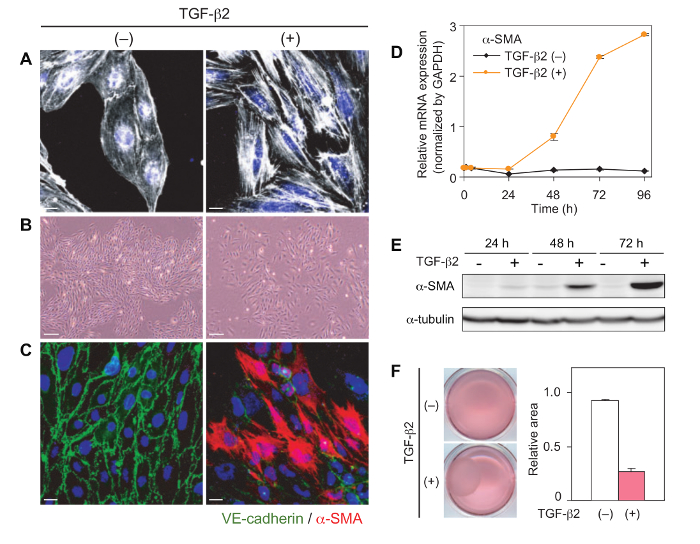 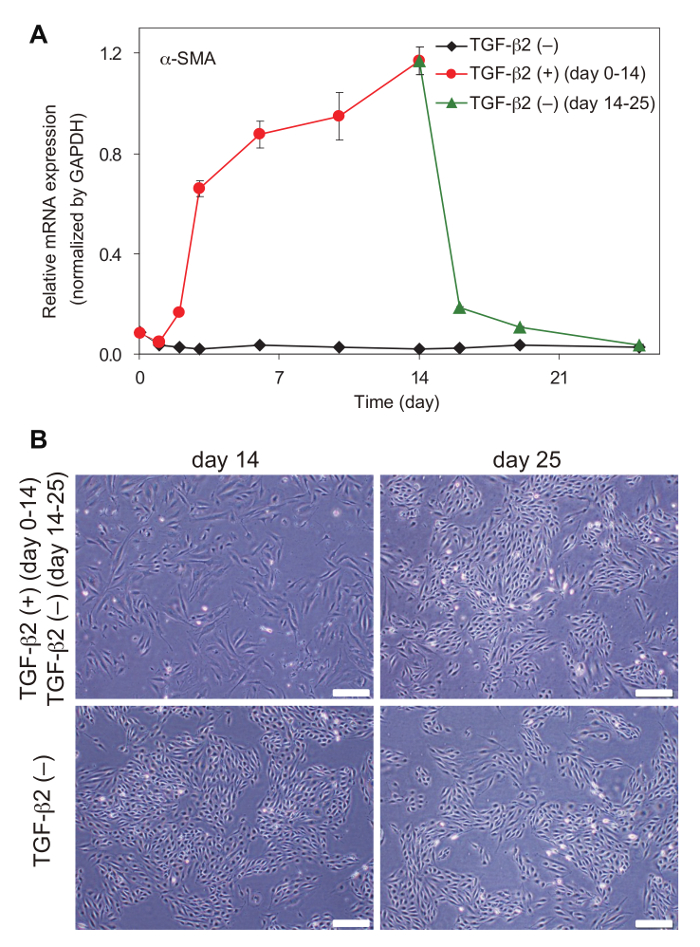 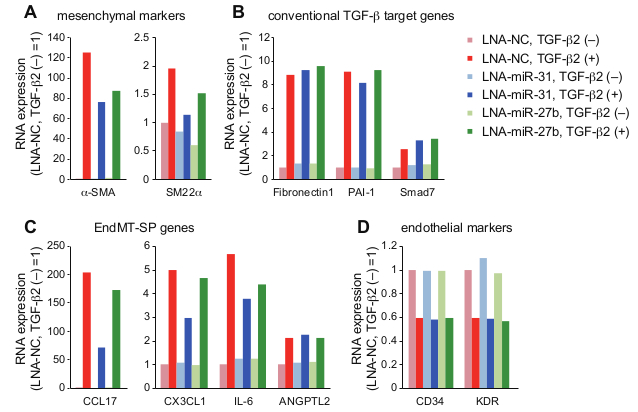 Table 1: Induction of EndMT by TGF-β in various endothelial cells. Culture conditions of EndMT induction by TGF-β are summarized. Changes in culture conditions including serum concentration and addition or removal of other growth factors are also noted.

The details of in vitro EndMT induction protocol need to be tailored in different cell lines: e.g., concentration of TGF-β, concentration of serum, addition or removal of other growth factors, and culture period. For example, HUVECs often poorly respond to TGF-β and EndMT would be induced by combination with other factors such as PDGF-BB and inflammatory stimuli and/or modulation of serum concentration and other medium components in a longer culture setting29,35. In addition, overconfluency would mitigate the responses to TGF-β.

EndMT is a dynamic process and an opposite process called mesenchymal-endothelial transition (MEndoT) has been recently reported36. While induction of mesenchymal markers by TGF-β alone is reversible in MS-1 cells (Figure 2), it has been reported that downregulation of endothelial markers in MS-1 cells with activated Ras persisted after withdrawal of TGF-β21. Irreversible EndMT has been also reported in iBREC and ovine aortic valve endothelial cells33,34. In addition, a previous report showed that the EndMT process persisted after withdrawal of TGF-β due to a sustained activation of Ras-GTP and methylation of the RASAL1 promoter in human coronary endothelial cells37. Thus, comparison of these models may be also useful to understand the regulatory mechanisms of endothelial cell plasticity.

Responsiveness of endothelial cells to EndMT induction appears to be substantially heterogeneous38. Xiao et al. reported that tumor-specific endothelial cells from a mammary tumor model show distinct forms of EndMT in response to TGF-β stimulation38. TGF-β-driven EndMT is also modulated by other signaling pathways including FGF-2, BMP-7, and IL-1β35,37,38. We also found that TNF-α enhances TGF-β-induced EndMT and EndMT-SP in MS-1 cells26. Furthermore, it is well known that EndMT is induced by other signaling pathways including Wnt, Notch, and hypoxia1. Thus, combination with other stimuli in various endothelial cells may be important to understand heterogeneity of EndMT responsiveness.

The EndMT protocol presented here can be easily modified to investigate the regulators of EndMT. In fact, we have characterized various regulators of EndMT in MS-1 cells20,26,27. A guanine nucleotide exchange factor Arhgef5 and myocardin-related transcription factor-A (MRTF-A) are induced by Smad signals, and both contribute to α-SMA upregulation in MS-1 cells20. Thus, TGF-β signaling activates both Rho signals and MRTF-A to induce EndMT. In addition, we also found that constitutively active miR-31 and TGF-β-inducible miR-27b positively regulate EndMT induction26,27. In MS-1 cells, constitutively active miR-31 is also necessary for TGF-β-induced EndMT-SP26. Overall, these in vitro EndMT induction procedures would be useful for understanding the biology of EndMT, identifying EndMT-associated gene signatures, and developing strategies to modulate this process. 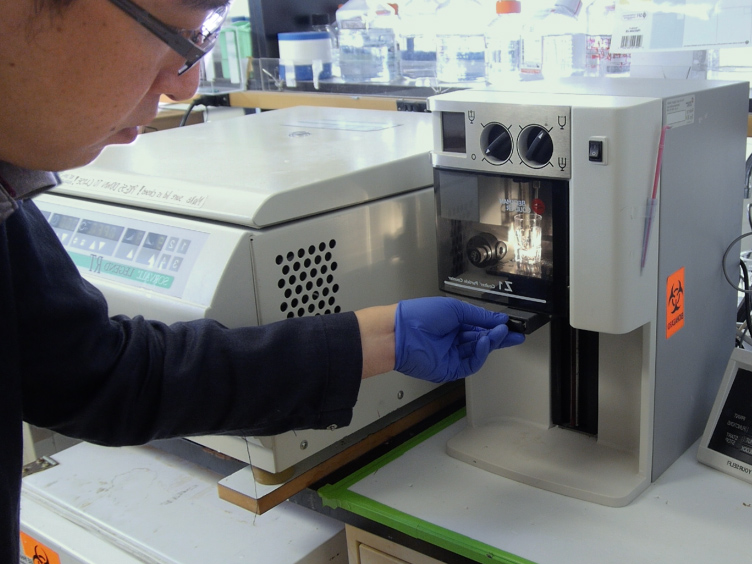