Here, we present a protocol to stage and dissect developing olfactory tissue from Drosophila species. The dissected tissue can later be used for molecular analyses, such as quantitative RT-PCR (Reverse Transcription-Polymerase Chain Reaction) or RNA sequencing (RNAseq), as well as in vivo analyses such as immunohistochemistry or in situ hybridization.

The olfactory system of Drosophila is a widely used system in developmental neurobiology, systems neuroscience, as well as neurophysiology, behavior, and behavioral evolution. Drosophila olfactory tissues house the olfactory receptor neurons (ORNs) that detect volatile chemical cues in addition to hydro- and thermo-sensory neurons. In this protocol, we describe the dissection of developing peripheral olfactory tissue of the adult Drosophila species. We first describe how to stage and age Drosophila larvae, followed by the dissection of the antennal disc from early pupal stages, followed by the dissection of the antennae from mid-pupal stages and adults. We also show methods where preparations can be utilized in molecular techniques, such as the RNA extraction for qRT-PCR, RNAseq, or immunohistochemistry. These methods can also be applied to other Drosophila species after species-specific pupal development times are determined, and respective stages are calculated for appropriate aging.

The olfactory system of Drosophila is a widely used system in developmental neurobiology, systems neuroscience, as well as neurophysiology, behavior studies, and behavioral evolution1,2,3,4. Drosophila olfactory tissues house the olfactory receptor neurons (ORNs) that detect volatile chemical cues in addition to hydro- and thermo-sensory neurons1,5,6. The overall goal of this manuscript is to demonstrate how to stage and dissect developing pupal and adult olfactory tissue in Drosophila species. The rationale for this technique is to generate samples from different pupal stages for molecular and developmental analyses of the peripheral olfactory system, such as RNAseq and quantitative RT-PCR, in addition to in vivo tissue labeling techniques. This technique can be especially useful to identify dynamics of transcriptional profiles in the developing adult olfactory system from non-melanogaster Drosophila species, which do not have all the transgenic reagents for cell type specific labeling and analyses. In this manuscript, we demonstrate how to dissect antennal discs and antennae from pupal and adult Drosophila species. First, we show how to identify Drosophila 0 h of puparium formation (APF, white pupae or prepupae) for developmental staging and species-specific aging. Next, we show how to dissect antennal discs and the third antennal segment; specifically, how to dissociate them from the eye disc and second antennal segment for the tissue purity required for RNAseq or RT-PCRs. The stages in D. melanogaster described in this protocol roughly correspond to the pre-patterned antennal disc (prepupae), the selection of precursors from the antennal disc (8 h APF), the start of the terminal differentiation for ORNs (40 h APF), and adult antenna. Finally, we give examples for a quantitative RT-PCR from adult antennae isolated using the method, and for in vivo immunohistochemistry. This method can be used to generate samples for an RNA/DNA analysis and for immunohistochemistry on developing peripheral olfactory tissues from different Drosophila species.

The following protocol is consistent with the ethics guidelines established by the Duke University Research Ethics Committee.

2. Tissue Preparation and Developmental Staging of Pupa from Other Drosophila Species

Note: All the aging times and dissection protocols are described for Drosophila melanogaster. For all other species, a modification of the aging protocol based on species-specific developmental time points will be required, as described above.

Note: By 40 h APF, the majority of the metamorphosis is complete, and the adult structures are becoming apparent, but are still white and nondescript. At this developmental time point, the adult antenna has taken its final shape yet still is transparent and the majority of the olfactory receptors, except for a few, have not started expression.

6. Fixation of the Pupal Antennal Discs and Antennae for Immunohistochemistry

The dissected developing olfactory tissue can be used for RNA extraction followed by RT-PCR to assess gene expression or can be taken through immunohistochemistry protocols to determine its expression pattern, and the sub-cellular localization of genes of interest. In this section, we present representative results from either protocol. Figure 1 is the representative quantitative RT-PCR showing the transcription of cell surface receptor and olfactory receptor genes in wild-type adult antennae. Figure 2 shows the 6 - 8 h and 12 h APF antennal disc stainings on Rn-EGFP transgenic flies using anti-GFP (1:1000) and anti-lamin antibodies (1:100) (Figure 2A and 2B). Rn-EGFP labels particular regions within the antennal disc during early pupal stages. We also show 40 h APF pupal antennal anti-GFP antibody staining of Or67d-GAL4 UAS-CD8GFP transgenic flies, and adult antennal anti-elav (1:100) antibody staining of ORNs (Figure 2). Other examples can also be found in the literature7,8,9,10. 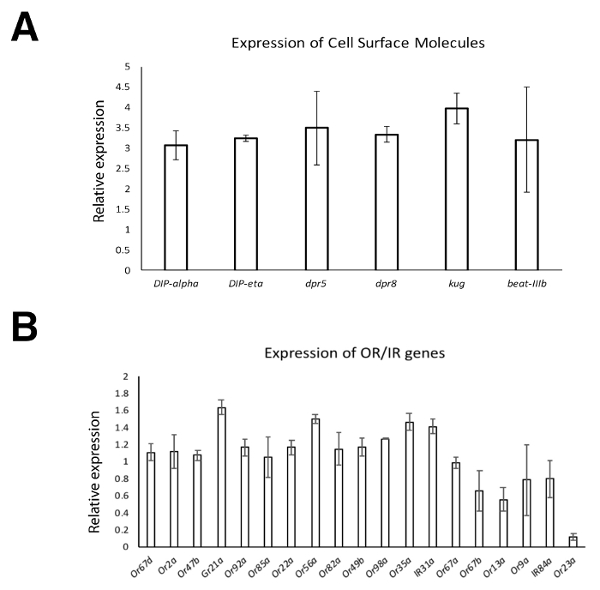 Figure 1. Quantitative RT-PCR from wild-type adult antennal RNA samples for different genes. These panels show quantitative RT-PCR results for (A) DIP-alpha, DIP-eta, dpr5, dpr8, kug, beatIIIb (for primer pairs see Table 1), and (B) olfactory and ionotropic receptor (Or/Ir) genes from adult antennal RNA samples. The error bars show a standard error of mean (SEM). Or/Ir genes are low abundance RNAs that can still be detected by qRT-PCR. The expression of each gene was analyzed in triplicate. Ct values were used to calculate the dilution factors for each gene based upon standard curves created for each gene. The dilution factors were then normalized for each gene to the average expression of all genes measured as described before8. Please click here to view a larger version of this figure. 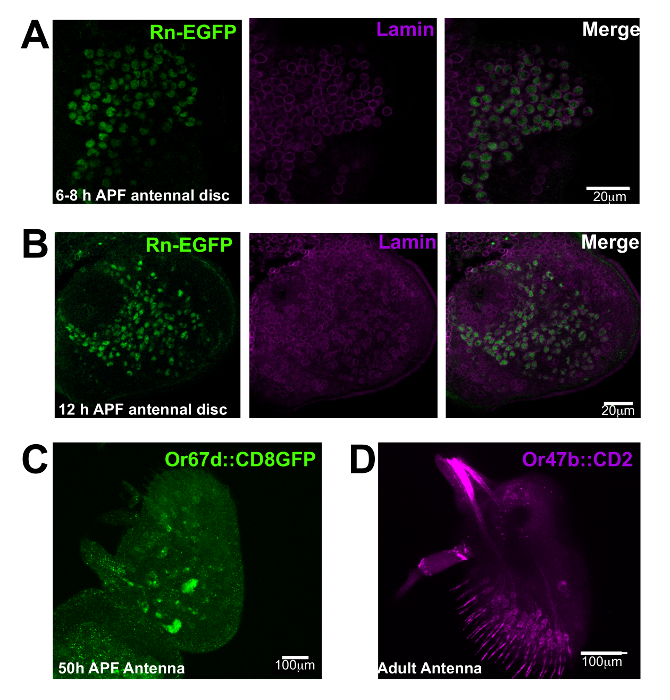 This protocol is a useful resource for labs interested in identifying the genetic and transcriptional programs operating in developing Drosophila olfactory tissue, as well as a comparative analysis of these programs across Drosophila species. It is especially useful if systems-level transcriptional profiles from different developmental stages are needed as a primer for future studies. The protocol described here demonstrates how to stage and isolate developing olfactory tissue from Drosophila to obtain samples from four key stages of olfactory system development from pre-patterning to terminal differentiation, to be used in molecular and immune-histological studies. Dissected Drosophila antennal discs and antennae at different pupal stages can be used to identify gene expression profiles during the olfactory system development at the systems level by RNA-seq, or at the level of individual genes by quantitative RT-PCR. Samples can also be used for immunohistochemistry and in situ hybridization to identify in vivo patterns of tissue-specific gene expression. An additional advantage of this protocol is that dissected samples can be further dissociated using standard methods, and FAC-sorted to obtain a purified cellular population (or single cells) for cell type-specific molecular analyses, such as quantitative RT-PCR or RNAseq.

Even though the protocol demonstrates dissections of antennal discs and antennae from pupal (at 0 h/prepupa, 8 h, and 40 h APF) and adult stages, it can be adapted to other pupal time points. It is also worth mentioning that learning these dissections takes time and practice. An expert should be able to dissect 50 samples an hour. It is important to not overage the pupae. Therefore, an hour before beginning dissection, ensure that no pupae are older than the desired age. Dissections can take time to learn, so a period of practice for each stage is required prior to starting experiments. Dissections become more difficult from 9 - 12 h APF due to morphological changes. It is possible to sort pupae by age when collecting prepupae (by body color, with darker colors being older). Initially sorting prepupae allows for dissection in order of age to prevent overaging.

The protocol described above can be applied to other Drosophila species. The timing for the pupal dissections of other species can be based both on the ratio of the pupal development of a given species at 25 °C to the D. melanogaster and on comparative observations of antennae/antennal disc morphology during dissections, with a priority given to morphological considerations to be as identical as possible. For Drosophila melanogaster, the pupal stage takes approximately 4 days. D. sechellia and D. erecta pupal developmental staging is similar to D. melanogaster; however, D. virilis pupal development is 1.3x longer11,12. When other species are prepared for dissection, the staging should be based on both the timing of the pupal period and comparative observations of stage-specific antennae/antennal disc morphology, with the morphological similarity being the highest priority. First, identify the optimum handling temperature for the species you are interested in. Many species grow well at 25 °C, but detailed information on maintenance conditions can be obtained from the UC San Diego Drosophila species stock center.

The most critical steps in the protocol are the correct staging and proper dissection of the tissue of interest in adequate numbers from different species. Once these are in place, the protocol provides an efficient method of tissue collection for such analyses and can be practically adapted to any developing imaginal disc tissue during the pupal stages in any Drosophila species.

This study was supported by a grant from the National Science Foundation to Pelin C. Volkan (DEB-1457690). 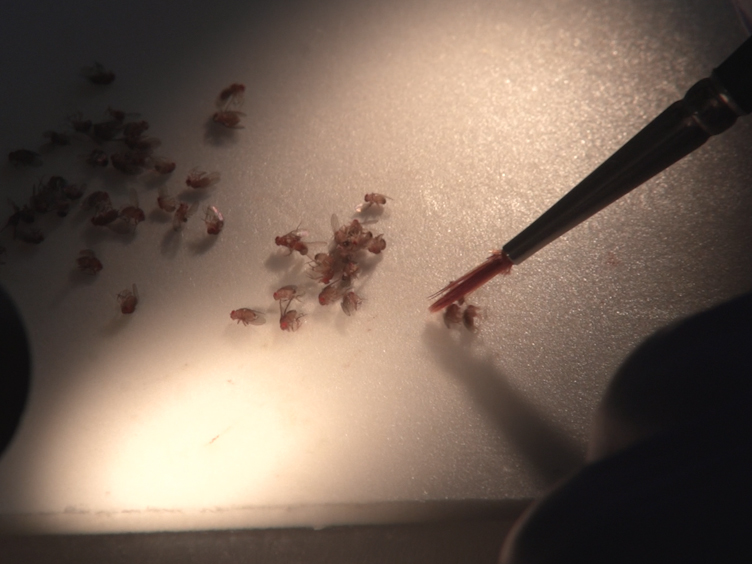