We describe a modified small-scale extraction and colorimetric assays of lactate and pyruvate in the nematode C. elegans. When utilizing commercial assay kits, the technical development of their sensitivity and accuracy is important. Protein precipitation in extraction is the most critical step for the quantitative determination of intracellular metabolites.

Lactate and pyruvate are key intermediates of intracellular energy metabolic pathways. Monitoring the lactate/pyruvate ratio in cells helps to determine whether there is an imbalance in age-related energy metabolism between mitochondrial oxidative phosphorylation and aerobic glycolysis. Here, we show the utilization of commercial colorimetric assay kits for lactate and pyruvate in the model organism C. elegans. Recently, the sensitivity and accuracy of the colorimetric/fluorimetric assay kits have been improved greatly by the research and development conducted by reagent manufacturers. The improved reagents have enabled the use of small-scale assays with a 96-well plate in C. elegans. In general, a fluorimetric assay is superior in sensitivity to a colorimetric assay; however, the colorimetric approach is more suitable for the use in common laboratories. Another important issue in these assays for quantitative determination is protein precipitation of homogenized C. elegans samples. In our protein precipitation method, common precipitants (e.g., trichloroacetic acid, perchloric acid and metaphosphoric acid) are used for sample preparation. A protein-free assay sample is prepared by directly adding cold precipitant (final concentration of 5%) during homogenization.

Lactate and pyruvate concentrations are widely regarded as intermediates of energy metabolism, and are related to the states of glycolysis, tricarboxylic acid (TCA) cycle, and electron transport chain in the cells of aerobic organisms. A series of reactions in glycolysis oxidize glucose to pyruvate, which lies at a metabolic crossroads and can be converted to carbohydrates through gluconeogenesis, to fatty acids and energy metabolism through acetyl-CoA, and to the amino acid alanine. The TCA cycle occurs under the presence of sufficient dissolved oxygen and is fundamental for the conversion of glucose to energy. Especially, the alteration of secondary metabolism is an interesting phenomenon in which glycolysis is used predominantly for energy production and aerobic mitochondrial respiration, which involves the TCA cycle and electron transport chain, is downregulated in mammalian cancer cells1,2. We showed recently that the lactate levels and the consequent lactate/pyruvate (L/P) ratio decreased during aging in the model organism Caenorhabditis elegans (C. elegans). Likewise, we found that the mammalian tumor suppressor p53 ortholog CEP-1 in C. elegans has an important role in the age-related alterations of energy metabolism through the activation of its transcriptional targets3.

In biological assays, such as the measurement of lactate and pyruvate concentrations in cells, the sensitivity, accuracy, sample size, and incubation time of colorimetric/fluorimetric assay kits have been improved dramatically. Owing to technological innovations, we are now able to analyze various metabolites and intermediate metabolites without the large-scale culture of C. elegans, which is difficult given its small size. In general, the sensitivity of a colorimetric assay is an order of magnitude smaller than that of a fluorimetric assay; however, the colorimetric approach is more suitable in the setting of common laboratories. Furthermore, an extraction technique containing homogenization and protein precipitation is crucial for the quantitative determination of lactate and pyruvate concentrations in C. elegans cells because this nematode is enclosed in an exoskeleton called the cuticle, unlike mammalian cultured cell lines4,5. Here, we describe a protocol to analyze lactate and pyruvate concentrations using commercial colorimetric assay kits including tips for sample extraction from C. elegans.

Using the colorimetric assays for the quantitative determination of lactate and pyruvate concentrations, we showed the accuracy of these assays compared with previous reports in C. elegans7,8. Here, the process of protein precipitation during sample extraction was the most crucial step to generate accurate values. For protein precipitation, common precipitants (e.g., TCA, PCA, or metaphosphoric acid) can be used to prepare the test samples (Figure 1). In C. elegans, however, it was necessary to perform protein precipitation during homogenization of the worms (Table 1). In addition to accuracy, these assays were sufficiently sensitive to measure lactate and pyruvate concentrations in small-scale samples and were able to detect them in a short period of time (the reactive incubation time of both assays is at least 30 min) (Figure 2-3). Actually, we presented the data in a recent report3. Thus, we could detect age-related metabolic alterations indicating that cellular lactate levels and the consequent L/P ratio decreased during aging, and we also showed different energy metabolism in a cep-1 mutant3. 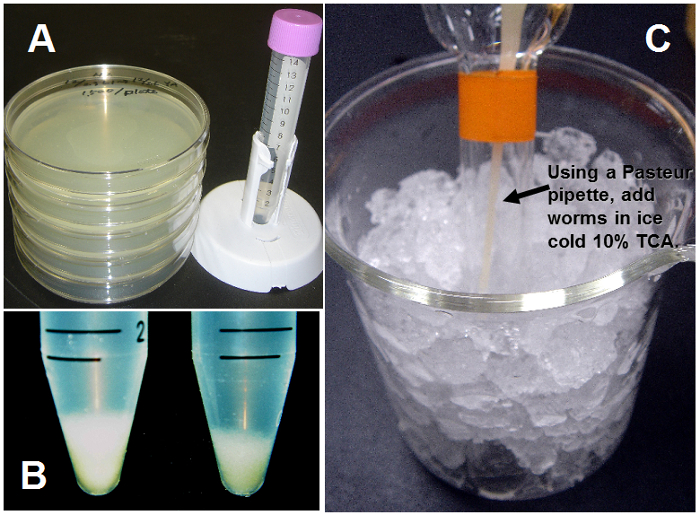 Figure 1. Process for the extraction of cellular metabolites. (A) 1,500-3,000 worms were placed on an NGM agar plate (90-mm Petri dish). Extraction from worms on five plates was sufficient for the colorimetric assays. (B) Worms collected from the five plates of 3,000 and 1,500 worms per plate are indicated on the left and right side of panel, respectively. Both the wet volumes in each 15-mL tube are < 0.5 mL, which were sufficient for detection. (C) Protein precipitation using 10% TCA during homogenization of the worms. Adding the worms into ice-cold 10% TCA in a homogenizer has to be performed before the worms are homogenized. Otherwise, cellular lactate and pyruvate cannot be detected in test samples using a colorimetric assay kit (data are shown in Table 1). Please click here to view a larger version of this figure. 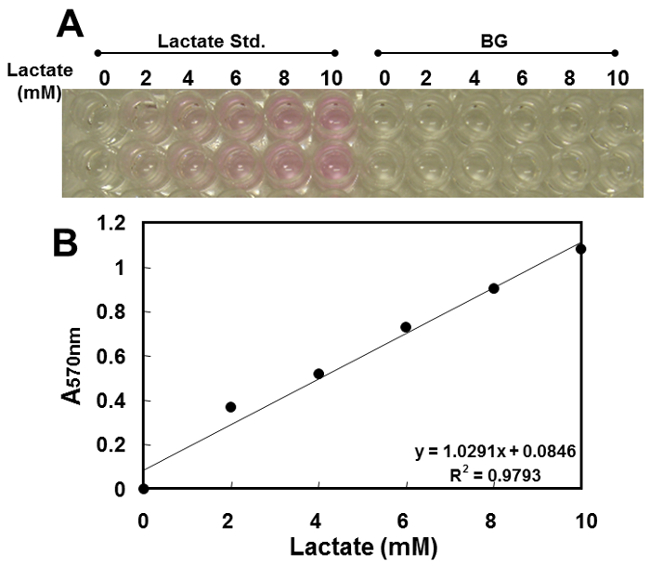 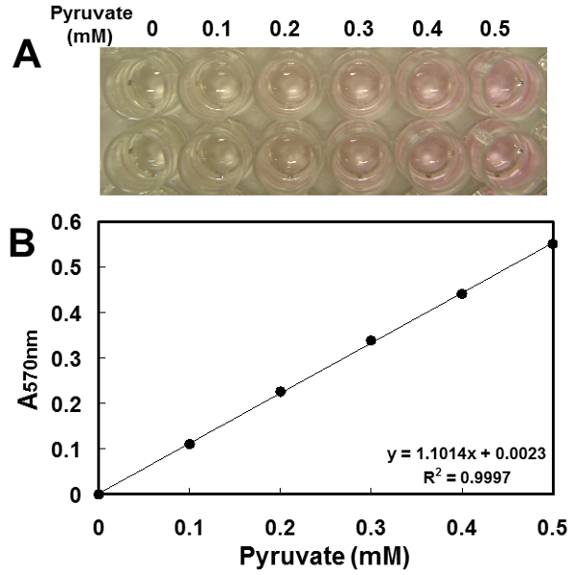 In this study, we used commercial colorimetric assay kits for the quantitative determination of lactate and pyruvate (Figure 2 and Figure 3). Their sensitivities and sample sizes were superior in comparison with previous assay kits7; therefore, we prepared the test samples using a smaller scale extraction and reported the differences in the cellular lactate and pyruvate concentrations in C. elegans3. We detected an age-related decrease in lactate and consequent L/P ratio in wild-type C. elegans and found that the p53/CEP-1 has an important role in the age-related alteration of energy metabolism through the activation of its transcriptional targets2,3. Thus, the analysis of energy metabolism in nematode C. elegans advantageously proceeds due to using the improved colorimetric assay kits, at least in part.

Hitherto, there are relatively few reports using conventional biochemical approaches in a model organism C. elegans, which typically need the large-scale culture of worms, compared with genetic studies5. However, the recent remarkable progress of biological assay systems (e.g., improvement of the sensitivity and stability of assay kits) makes studies using the nematode C. elegans, which is small and consists of fewer than 1,000 cells, more attractive and performed easily in the laboratory. Henceforth, effective metabolomic analysis using mass spectrometry (MS) and gas chromatography/mass spectrometry (GC/MS) can help to reduce certain problems, such as large-scale culture, analytical sensitivity, and specificity, and will help to elucidate the role of cellular metabolism in aging and human diseases including cancer10. Looking ahead, easier methodology, such as colorimetric assay kits, would be effective as a screening tool prior to more precise instrumental analyses.

This work was financially supported by a Special Research Grant from Daito Bunka University to Sumino Yanase. 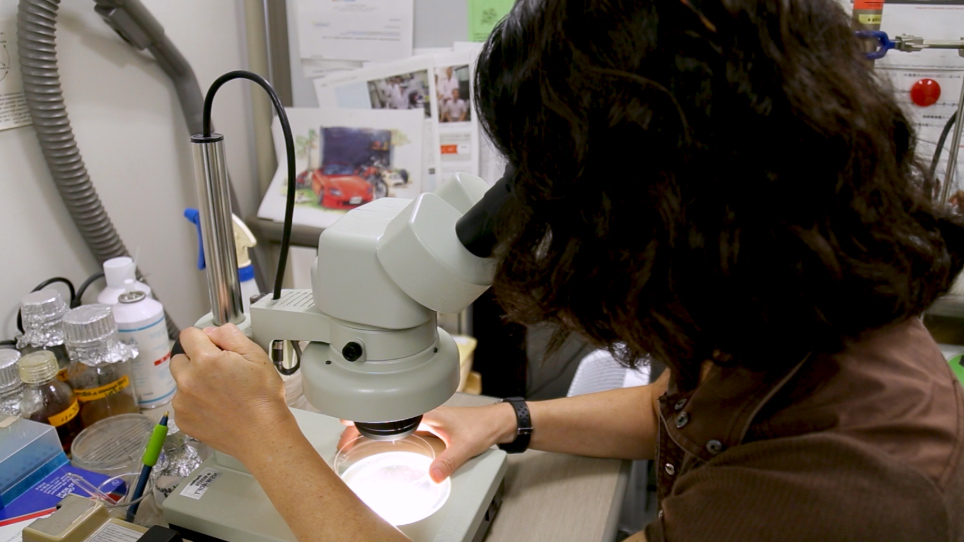