The purification of ion channels is often challenging, but once achieved, it can potentially allow in vitro investigations of the functions and structures of the channels. Here, we describe the stepwise procedures for the expression and purification of mammalian bestrophin proteins, a family of Ca2+-activated Cl- channels.

The human genome encodes four bestrophin paralogs, namely BEST1, BEST2, BEST3, and BEST4. BEST1, encoded by the BEST1 gene, is a Ca2+-activated Cl- channel (CaCC) predominantly expressed in retinal pigment epithelium (RPE). The physiological and pathological significance of BEST1 is highlighted by the fact that over 200 distinct mutations in the BEST1 gene have been genetically linked to a spectrum of at least five retinal degenerative disorders, such as Best vitelliform macular dystrophy (Best disease). Therefore, understanding the biophysics of bestrophin channels at the single-molecule level holds tremendous significance. However, obtaining purified mammalian ion channels is often a challenging task. Here, we report a protocol for the expression of mammalian bestrophin proteins with the BacMam baculovirus gene transfer system and their purification by affinity and size-exclusion chromatography. The purified proteins have the potential to be utilized in subsequent functional and structural analyses, such as electrophysiological recording in lipid bilayers and crystallography. Importantly, this pipeline can be adapted to study the functions and structures of other ion channels.

Bestrophins are a family of ion channels conserved through species varying from bacteria to humans1. In humans, the BEST1 gene, located on chromosome 11q12.3, encodes the membrane protein Bestrophin-1 (BEST1) that is predominantly expressed in the basolateral membrane of retinal pigment epithelium (RPE) cells of the eyes2,3,4. Comprised of 585 amino acids, the first ~350 of which are highly conserved among species and contain its transmembrane region, BEST1 acts as a CaCC in humans1,5,6. Furthermore, the BEST1 homologs in chickens and Klebsiella pneumoniae both function as homopentamers7,8, suggesting a high level of conservation throughout evolution.

In humans, over 200 mutations in the BEST1 gene have been clinically linked to a group of retinal degeneration diseases called bestrophinopathies1,9. Five specific bestrophinopathies have been reported, including Best disease, adult-onset vitelliform dystrophy, autosomal dominant vitreoretinochoroidopathy, autosomal recessive bestrophinopathy, and retinitis pigmentosa3,4,10,11,12,13,14. These diseases, which lead to decreased eyesight and even blindness, are currently untreatable. In order to develop therapeutic treatments and potentially personalized medicine, it is critical to understand how these BEST1 disease-causing mutations influence the function and structure of the BEST1 channel15. For these purposes, researchers need to obtain purified bestrophin (wild type and/or mutant) channels and conduct in vitro analyses5,8.

The first key step is the expression of bestrophin channels from higher species in mammalian cells. As baculovirus transduction of HEK293-F cells (the BacMam system) is a powerful method to heterologously express membrane proteins16,17, this protocol utilizes an optimized BacMam vector (pEG BacMam) for robust expression of the target protein18, which in this case is a mammalian bestrophin homolog. This vector has been used for the expression of various membrane proteins, including G-protein-coupled receptors, nuclear receptors, and other ion channels18. There is also evidence that the produced proteins are suitable for crystallography18. With high levels of expression in HEK293-F cells, the proteins can then be purified using chromatography; specifically, in the case of bestrophins, both affinity and size-exclusion chromatography can be used.

Once this protocol is fine-tuned for a bestrophin channel, the purified protein can then be analyzed for its function and structure through planar lipid bilayer and X-ray crystallography, respectively5,8. Altogether, these techniques provide a powerful pipeline for functional and structural investigations of bestrophins and other ion channels.

The fluorescence intensity in transiently-transfected adhesive HEK293 cells (Figure 1A) is a good indicator for the projected protein expression level in suspension HEK293-F cells (Figure 1B). If the target protein is not well-expressed or is mis-localized in HEK293 cells after transient transfection, it is recommended to consider modifying the expression construct (e.g., changing the position of the GFP tag or making mutations/truncations on the target protein). Small HEK293-F suspension cultures (e.g., 25 mL cultures) are used to optimize the conditions for protein expression, among which the infection MOI and culturing temperature have been the most important in previous experiences.

A successful purification is indicated by a single main peak at the expected elution volume in size-exclusion chromatography (Figure 2A) and a single dominant band on a denatured SDS-PAGE gel (Figure 2B). If multiple peaks appear in size-exclusion chromatography, it is important to collect each peak and run a native gel for determining which peak contains the functional channel pentamers. It should be noted that between two protein constructs, the expression level, indicated by fluorescence intensity at the time of harvest, does not nesessarily correlate with the final yield, as each protein construct behaves differently during purification. For a well-behaved bestrophin protein, 200-500 µg of the final purified product can typically be obtained from 1 L of HEK293-F suspension cells. 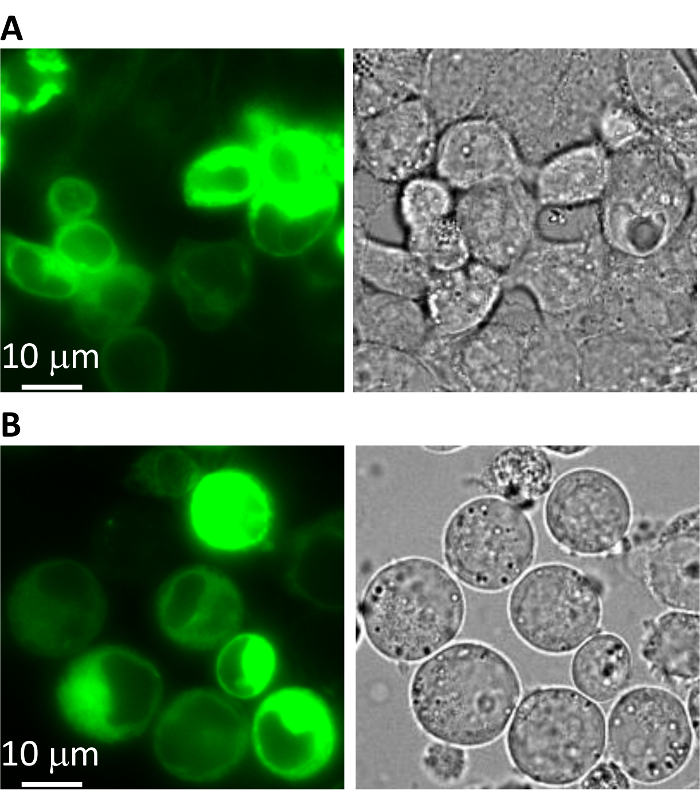 Figure 1: Expression of a mammalian bestrophin protein. Microscopic images of a GFP-tagged mammalian bestrophin expressed in (A) adhesive HEK293 cells by plasmid transfection, and in (B) suspension HEK293F cells by baculovirus infection. Left = green fluorescence; right = bright-field. Please click here to view a larger version of this figure. 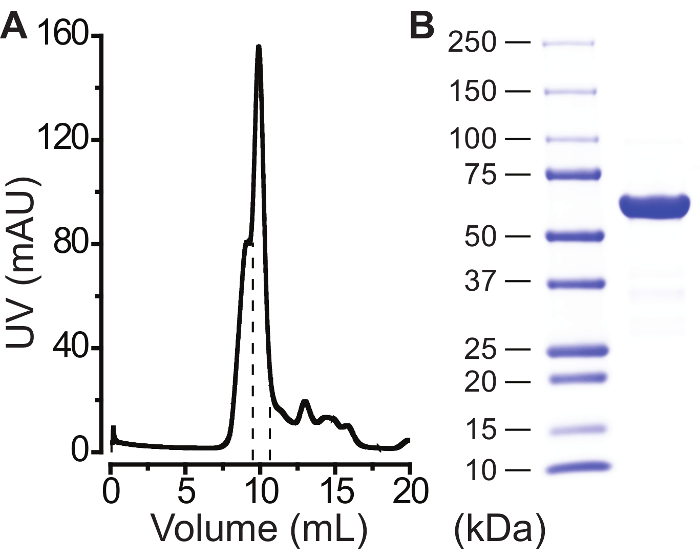 Figure 2: Purification of a mammalian bestrophin protein. (A) Affinity-purified GFP-tagged proteins ran on a size exclusion gel-filtration column as one main peak. Fractions between dashed lines were collected. (B) Final protein product ran on a SDS-PAGE gel with ladders (left column). Please click here to view a larger version of this figure.

This protocol describes a useful pipeline for expression and purification of mammalian bestrophin ion channels to be used for future in vitro analyses. While the FPLC device is required for size-exclusion chromatography, a syringe pump is sufficient for all steps of affinity chromatography including binding, washing, and eluting. When using a syringe pump to push solutions (in a syringe) through a column, it is essential to underlay the spring side to avoid pushing air bubbles into the column. If the purity of the protein after affinity chromatography is already sufficient for the subsequent experiments, size-exclusion chromatography can be omitted so that a FPLC device may not be required at all.

As it takes about 2 weeks to make the baculoviruses from pBacMam plasmids, to increase efficiency, an initial screen for well-behaved protein homologs can be carried out by harvesting the transiently transfected HEK293 cells (e.g., from a 60 mm dish) and testing how the expressed protein of interest (GFP-tagged) behaves in detergents (e.g., DDM) with fluorescence-detection size-exclusion chromatography (FSEC)18,24. It is most productive to focus on protein constructs that display strong fluorescence in transfected HEK293 cells and good monodispersity and stability in FSEC.

There are several recommendations for increasing the yield of protein purification. First, the conditions for TEV digestion may need to be optimized for each protein. This can be done by testing a range of protein-to-TEV mass ratios (e.g., 10:1, 5:1, 2:1, 1:1, 1:2, 1:5, and 1:10) and incubating times (e.g., 0.5 h, 1 h, 2 h, 5 h, and overnight). Then, it is suggested to run the treated samples in a SDS-PAGE gel to check the cleavage efficiency. In addition, it is important not to let any centrifugal supernatant or eluent leak out of the connections on the FPLC or syringes. Similarly, it is important to avoid bubbles when pipetting the concentrated protein.

This project was funded by NIH grants EY025290, GM127652, and University of Rochester start-up funding. 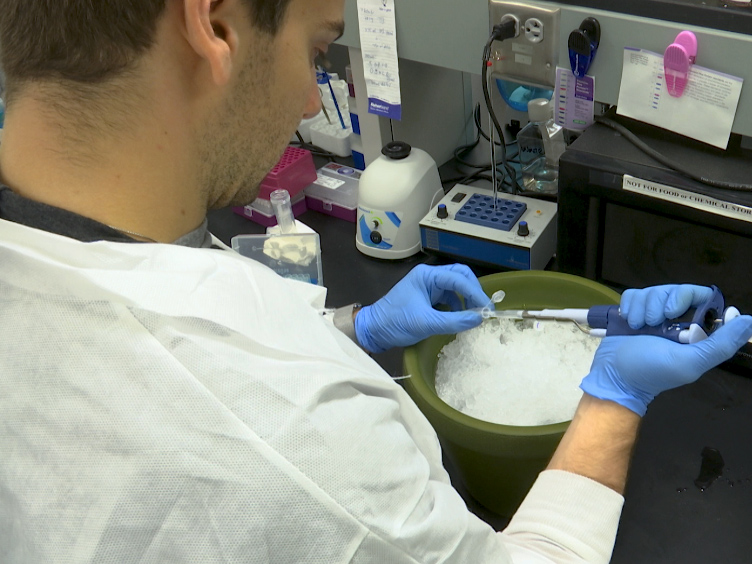