For efficient control of mosquito borne virus transmission, the knowledge of the vector potential of respective mosquitoes is of particular interest. We describe forced salivation as a method to analyze vector competence of Aedes albopictus and three different Culex taxa for the transmission of Zika virus.

Vector competence is defined as the potential of a mosquito species to transmit a mosquito-borne virus (mobovirus) to a vertebrate host. Viable virus particles are transmitted during a blood meal via the saliva of an infected mosquito. Forced salivation assays allow determining the vector potential on the basis of single mosquitoes, avoiding the use of animal experiments. The method is suitable to analyze a large number of mosquitoes in one experiment within a short period of time. Forced salivation assays were used to analyze 856 individual mosquitoes trapped in Germany, including two different Culex pipiens pipiens biotypes, Culex torrentium as well as Aedes albopictus, which were experimentally infected with Zika virus (ZIKV) and incubated at 18 °C or 27 °C for two and three weeks. The results indicated the lack of vector competence of the different Culex taxa for ZIKV. In contrast, Aedes albopictus was susceptible to ZIKV, but only at 27 °C, with transmission rates similar to an Aedes aegypti laboratory colony tested in parallel.

In 2015, Zika virus (ZIKV), a mosquito-borne virus (mobovirus) belonging to the family Flaviviridae, emerged in Columbia and Brazil and spread rapidly across the Americas and the Caribbean, causing an epidemic with notable numbers of associated clinical cases of microcephaly and Guillain–Barré syndrome1. Mosquitoes of the species Aedes aegypti and Aedes albopictus are considered the primary and secondary vectors of ZIKV2, but other species of the genus Aedes have also proven to have experimental vector competence3. In contrast to Aedes species, most of the Culex species tested so far are not able to transmit the virus4. Merely, the data for Culex quinquefasciatus provided inconclusive results3. At present, information is lacking on mosquito vector competence for ZIKV under moderate temperature conditions (<20 °C). However, this information is substantial for the risk assessments of possible spreads to regions with temperate climate such as Central Europe.

A competent vector for ZIKV is able to acquire, maintain, amplify and finally transmit the virus. Therefore, testing the mosquito bodies or parts of the bodies, including legs, midgut, head or salivary glands, for ZIKV is not sufficient to determine vector competence. It is mandatory to test for infectious virus particles within released saliva. To assess vector competence, both infection rate (IR, number of ZIKV-positive mosquito bodies per number of engorged mosquitoes) and transmission rate (TR, number of mosquitoes with ZIKV-positive saliva per number of ZIKV-positive mosquito bodies), have to be determined. IRs of mosquitoes can be easily analyzed by simply homogenizing mosquitoes followed by a reverse-transcriptase real-time polymerase chain reaction (RT-qPCR) targeting ZIKV. Moreover, the infection can be further characterized by determining the viral copy numbers per mosquito. In contrast, the analysis of transmission rates relies on the detection of viable virus particles in the saliva of individual mosquitoes. This can be achieved by feeding of infected mosquitoes on susceptible host animals, followed by the analysis of the viremia in the host5. However, this method relies on suitable model organisms, and is costly and restricted by animal-welfare regulations. To avoid the use of laboratory animals for analyzing transmission rates and to reduce costs, artificial re-feeding systems using blood droplets have been described6. However, testing on individual scale combined with a high number of individuals is difficult and time-consuming. The first description of a salivation assay on individual scale was published in 19667 and during recent years, forced salivation experiments have become the method of choice to evaluate the vector competence of mosquitoes3,8.

Based on our vector competence study of Central European mosquitoes published recently9, we describe forced salivation as reported by Anderson et al.8 with some modifications. This method allows high throughput standardized experiments under high biosafety level conditions (BSL-3) and includes the identification of active virus by cell culture based assays. The experiments described here include 856 mosquitoes. They were infected with ZIKV by artificial blood meal and subsequently analyzed for the presence of infectious virus particles in the saliva. The mosquitoes introduced into the experiments comprised two long-established laboratory populations of Ae. aegypti and Culex pipiens pipiens biotype molestus (Cx. p. molestus), as well as field caught Culex pipiens pipiens biotype pipiens (Cx. p. pipiens), Culex torrentium (Cx. torrentium) and two Ae. albopictus populations. With the exception of one of the two Ae. albopictus populations, which was collected in Italy, all mosquitoes were collected in Germany.

NOTE: All steps are performed under BSL-3 conditions.

NOTE: All steps are performed under BSL-3 conditions.

Aedes aegypti is known as a competent vector for ZIKV at least under tropical climatic conditions12. Therefore, we used Ae. aegypti as a positive control to establish the assay and to analyze IRs as well as TRs at an incubation temperature of 27 °C and a humidity of 80%. IR and TR were defined as previously described by Fortuna et al.13. Challenged Ae. aegypti showed IR of 50% and 72% and TR of 42% and 31% at 14 and 21 days post infection (dpi), respectively (Figure 1A and 1B). Subsequently, European mosquitoes were tested for ZIKV infection and transmission using tropical as well as temperate climatic conditions.

At 27 °C incubation temperature, all mosquito species showed ZIKV infection at 14 dpi as well as 21 dpi, except Cx. p. pipiens and Cx. torrentium individuals, which were positive at 14 dpi only. All Aedes species showed higher IRs (between 50% and 72%) as well as higher viral RNA concentration (106 up to 109 RNA copies/mosquito specimens) in comparison to the different Culex taxa, which revealed IRs ranging between 0% and 32% and viral loads of 103 to 104 RNA copies/mosquito specimens. All Aedes species displayed ZIKV-positive saliva (TR 13–42%), whereas none of the saliva samples from the Culex taxa contained ZIKV (Figure 1A and 1B). Interestingly, transmission rates at 21 dpi were similar in Ae. aegypti and Ae. albopictus from Germany (30%), but were substantially lower in Ae. albopictus from Italy (13%).

Incubation of challenged mosquitoes at a moderate temperature of 18 °C revealed generally lower virus loads in the Aedes species (104–106 RNA copies/mosquito) as well as in the different Culex taxa (102–104 RNA copies/mosquito). However, at 18 °C incubation temperature, transmission of ZIKV was not observed for any of the mosquito species investigated. 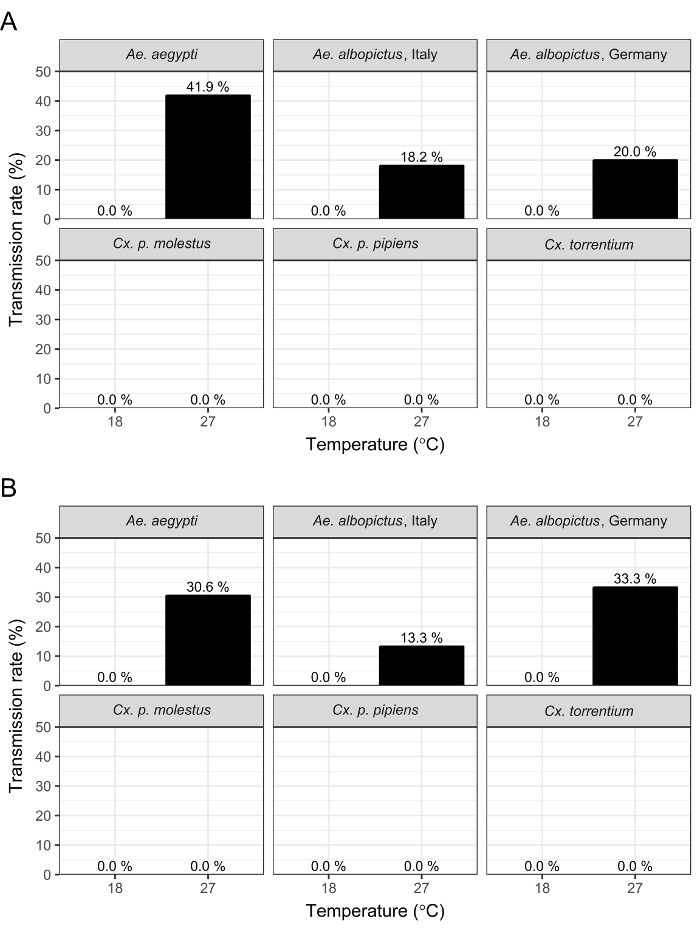 Figure 1: Transmission rates of mosquitoes experimentally infected with ZIKV. Results of vector competence studies with ZIKV in different mosquito species. Six different mosquito taxa were infected with ZIKV and incubated at 27 °C or 18 °C for 14 (A) or 21 (B) days. TR is defined as the number of mosquitoes with ZIKV-positive saliva per number of ZIKV-positive mosquito bodies. The total number of mosquitoes investigated was 856, with a minimum of 30 individuals for each time point/temperature/mosquito taxa. Please click here to view a larger version of this figure.

It has previously been shown that results obtained with forced salivation are in line with classical re-feeding experiments6. However, both in re-feeding experiments and in our presented method of forced salivation, it is impossible to directly proof salivation activity or monitor the release of saliva. To prove salivation activity, samples could be tested for other components present in the saliva (e.g., proteins, carbohydrates, etc.). Furthermore, additional qPCRs would allow detection of viral RNA copies. This, however, requires splitting of saliva samples for various analyses, which may limit sensitivity in the cell culture assay in case of very low particle numbers. In turn, this might lead to an underestimation of the determined transmission rates.

For reproducible results, it is necessary to ensure that all mosquitoes stay alive until the end of the experiment. This is controlled by visually monitoring the body movement activity of the mosquitoes. Furthermore, the principle use of the salivation assay for a given mosquito species has to be tested by feeding control viruses, which are known to be transmitted by this specific mosquito species. Vice versa, every virus introduced into an experiment has to be tested in a susceptible mosquito.

Forced salivation assays have many advantages. High numbers of mosquitoes can be tested simultaneously on a single specimen base under controlled standardized conditions without conflicting with animal welfare regulations9.

The method is used by several laboratories. However, exact setups may differ, which can lead to differences in results between laboratories. One critical component is the capillary to collect the saliva, which can be made of glass14 or plastic15. To comply with the high safety regulations of a biosafety level 3 insectary, we used plastic filter tips instead of glass capillaries, thus reducing the risk of injuries. Furthermore, filter tips have the advantage that the collected liquid can easily be transferred using a pipette.

The salivation assay presented here is used to gain insights into the vector potential of mosquito species. However, to answer some other specific questions (e.g., the numbers of mosquito bites that are needed to infect vertebrates), animal experiments might still be required. 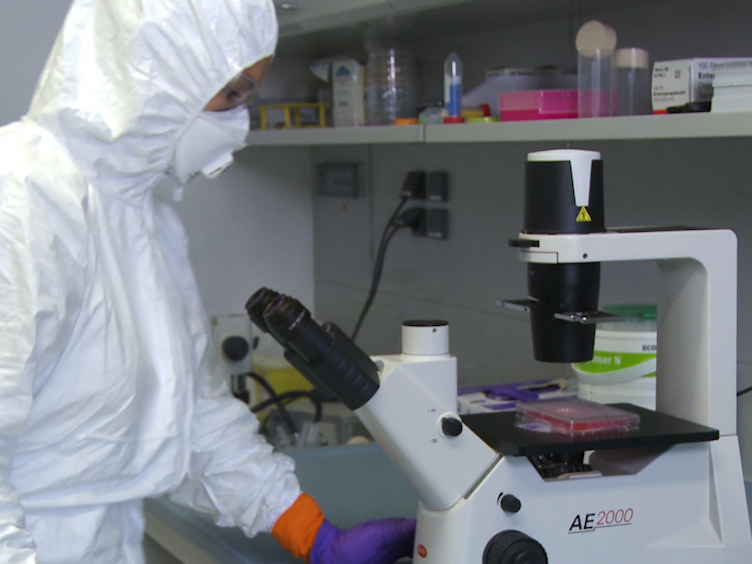