Insecticide resistance is currently a major issue of house fly control worldwide1,2. Efforts to determine the mechanism of insecticide resistance facilitates better understanding of this issue and thus provide novel strategies to effectively prevent or minimize the spread of resistance development3. Carboxylesterases, as one of the major detoxification enzymes, have attracted a lot of attention for their roles in sequestering and metabolizing insecticides in various insects4,5,6. Our previous study has identified multiple carboxylesterases in house flies and their expression levels were not only constitutively up-regulated in the resistant ALHF strain but also can be induced to higher levels in response to permethrin treatments7. However, the functional characterizations of these carboxylesterase genes in metabolizing insecticides remain to be explored.

Since the first report in early 1980s8, a baculovirus-mediated foreign gene expression system has been widely employed due to its high protein production efficiency and eukaryotic protein processing capabilities9. This binary system is composed of two essential elements: the constructed recombinant baculovirus delivering foreign genes into the host cells, and the large-scale expression of interested proteins by cells infected by recombinant baculovirus. Over the past decades, the baculovirus mediated cell expression system has been widely used to produce thousands of recombinant proteins, ranging from cytosolic enzymes to membrane-bound proteins in insect and mammal cells10. Our previous study has successfully expressed multiple CYP450 enzymes in insect Sf9 cells with this system11. In this study, we constructed a carboxylesterase-recombinant baculovirus to infect insect Sf9 cells, explored the cell tolerance to different permethrin treatments, and large-scale expressed carboxylesterase proteins in vitro for functional exploration. Instead of investigating multiple carboxylesterase isozyme mixtures from insect homogenates as adopted by previous studies12,13, this baculovirus-mediated insect cell expression system allows the specific expression and isolation of targeted proteins for better characterization of their biochemical and structural properties.

The tetrazolium salt-based assay (MTT) is a high-throughput colorimetric method developed and optimized to measure cell viability. This assay is based on the mechanism that only living cells are capable of metabolizing the yellow-colored MTT reagent to a dark purple colored formazan precipitate, which can be colorimetrically analyzed after dissolved in organic solvents14,15. Several more accurate but time-consuming methods, such as Trypan blue exclusion and the thymidine titration assay16,17, have been developed in recent years. However, the cell-based MTT assay is still currently recognized as the most rapid and easily-operated method to quickly detect cell viability. Here, we use the MTT assay to explore the cell tolerance against insecticide treatments. The enhanced tolerance of cells when infected with carboxylesterase recombinant baculovirus strongly supports the metabolic roles of carboxylesterases to insecticides, which in turn suggests their involvement in insecticide resistance.

1. Expression and Isolation of Target Proteins with a Baculovirus-mediated Insect Cell Expression System

Figure 1: Example results of MdαE7 LR reaction by PCR analysis. Dilute 2 µL of LR reaction 200-fold and use 2 µL of dilution together with Polyhedrin forward primer and V5 reverse primer to perform a 25 µL PCR. Use 5 µL of PCR products to run 1% agarose gel to check the quality of LR reaction. a 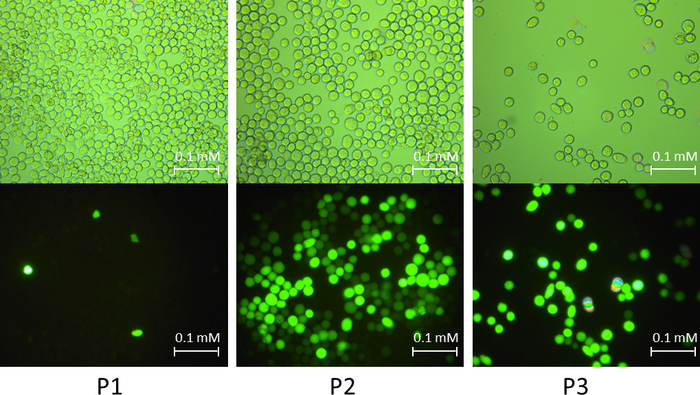 Figure 3: Example of MTT results. After 48 h post infection with P1 virus stock solution of CAT recombinant baculovirus solution, evenly seed 500 µL cells expressing CAT gene in a 24-well cell culture plate. Respectively, add 4 µL permethrin at a different dose (6.25 mM, 12.5 mM, 25 mM and 50 mM) in each row to make the final concentration to 50 µM, 100 µM, 200 µM and 400 µM. The control row was treated with acetonitrile only and marked as CK in the plate. (A) After 48 h of incubation at 27 °C, discard the cell culture medium on the upper layer and replace with 200 µL of yellow colored MTT reagents. Then incubate at 37 °C for 48 h. Dark purple colored reduction precipitates form in each well indicating that the survival cells are capable of metabolizing the yellow color MTT reagents into the dark purple colored precipitate. (B) 500 µL of DMSO solvent was added into each well to dissolve the formed precipitate. The absorbance value of each well was detected by spectrophotometer at 540 nm. As permethrin concentrations increase , the color will gradually change from dark red to light red, suggesting that the cell viabilities were gradually decreased. Please click here to view a larger version of this figure.

The cytotoxicity of permethrin was examined in MdαE7-recombinant baculovirus infected Sf9 cells (experimental group) and CAT-recombinant baculovirus (provided by baculovirus infected kit) infected cells (control groups). The enhanced cell tolerances to permethrin in MdαE7 expressing cells strongly support the metabolic roles of this carboxylesterase against insecticides and thus protecting cells from chemical damages. In our study, the cell viability against different permethrin concentrations (50, 100, 200 and 400 µM) was calculated in comparison with cells treated with acetonitrile alone. Our results showed that the viability of MdαE7 expressing cells was significantly higher (ranging from 86.00% to 101.92%) (Figure 4B) than that of control cells (ranging from 67.59% to 81.43%) (Figure 4A) when exposed to permethrin at different concentrations, indicating the important roles of MdαE7 in metabolizing permethrin in insect cells.

In vitro metabolism of permethrin by MdαE7

Permethrin metabolism was assayed by incubating a 40 µM permethrin standard solution together with MdαE7 proteins extracted from infected Sf9 cells. The reactions with CAT proteins served as controls. The depletion percentage of permethrin was calculated in comparison with reactions without enzyme added. Reactions were monitored by reverse-phase HPLC after a 120 min incubation period. Since the permethrin standard is actually a mixture of cis- and trans- isomers, two peaks were observed in the HPLC chromatographic profiles, with elution times of 10.67 min and 10.87 min for trans-permethrin and cis-permethrin, respectively (Figure 5). The depletion percentage of permethrin by MdαE7 proteins (39.18±3.78%) was significantly higher than that of CAT proteins (7.29±0.81%) (Figure 6), which is not only be consistent with MTT results but also directly demonstrates the capabilities of MdαE7 in metabolizing permethrin in vitro. 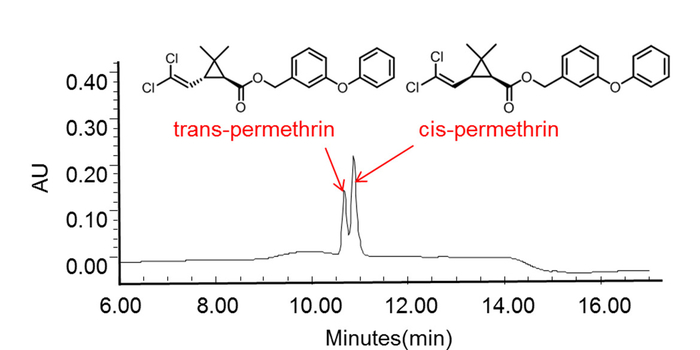 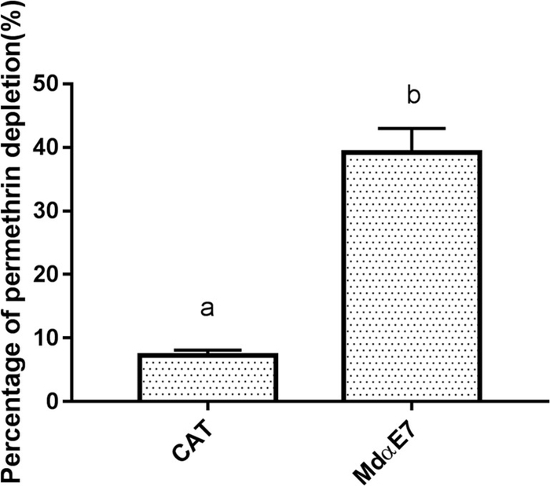 In recent decades, heterologous expression systems have been widely used to express and isolate large amounts of proteins, thus allowing biochemical and functional determination and characterization of enzymes in vitro. To date, several different model systems including Escherichia coli, Pichia pastoris, Sacccharomyces cerevisiae, and Spodoptera frugiperda have been adapted for recombinant protein expression, and the choice of the in vitro system is crucial for large scale generation of interested proteins22,23,24,25. In our study, the baculovirus-mediated insect cell expression system to generate house fly carboxylesterases was chosen because it provides a similar intracellular environment to insect cells and maintains some important eukaryotic processing capabilities9. Despite the advantages of the baculovirus-mediated expressing system, its limitations should also be addressed. The baculovirus-mediated insect cell expression system can produce target proteins only if the insect cells were infected with constructed recombinant baculovirus. The current development of creating stably transformed insect cell lines has made it possible not only to constitutively produce interested proteins in the absence of baculovirus infection, but also to improve cell capabilities of glycosylating and folding generated proteins through engineering modifications9.

To better investigate the roles of carboxylesterases in metabolizing insecticides in cells and thus protecting cells from chemical damages, the MTT assay was conducted to measure the cell cytotoxicity against different permethrin treatments. During this process, a lot of experimental parameters associated with cell metabolism, such as cell medium compositions, cell growth rate, concentration and consumption of energy supply metabolites, can influence the MTT reduction and thereby lead to inaccurate results. To minimize the over/underestimation of the MTT assay, keep the cell culture medium, cell growth state, and the incubation conditions consistent among different experimental treatments26. In order to determine the cell viability effects caused by baculovirus infection rather than permethrin, we showed that the infection process of GFP-recombinant baculovirus to insect Sf9 cells, and found that at the P2 infection stage, the cells have the highest infection ratio with lowest cell death ratio compared with to other infection stages (Figure 2). This can better explain the reason of choosing cells at P2 infection stage to conduct the MTT assay.

By comparing the viabilities of cells when infected by MdαE7- and CAT-recombinant baculovirus in an MTT study, we found an enhanced viability of cells when expressing MdαE7 proteins, which can better support the metabolic roles of carboxylesterases to permethrin in insect cells and protect cells from chemical damages (Figure 4). The in vitro metabolic study, which is recognized as a direct method to reflect the metabolic capabilities of carboxylesterases toward insecticides, should also been explored to compensate the limitations of MTT assay in better characterizing protein metabolic functions.

In this study, the heterologous expression of carboxylesterases in insect Sf9 cells with a baculovirus-mediated expression system, the measurement of cell viabilities toward different permethrin treatments by the MTT assay, and the characterization of carboxylesterases through an in vitro metabolism assay all work together to provide a systematic, scientific and accurate strategy to investigate the roles of detoxification enzymes in insects, thus facilitating a better understanding of insecticide resistance mechanisms and thereby developing innovative strategies for pest management. 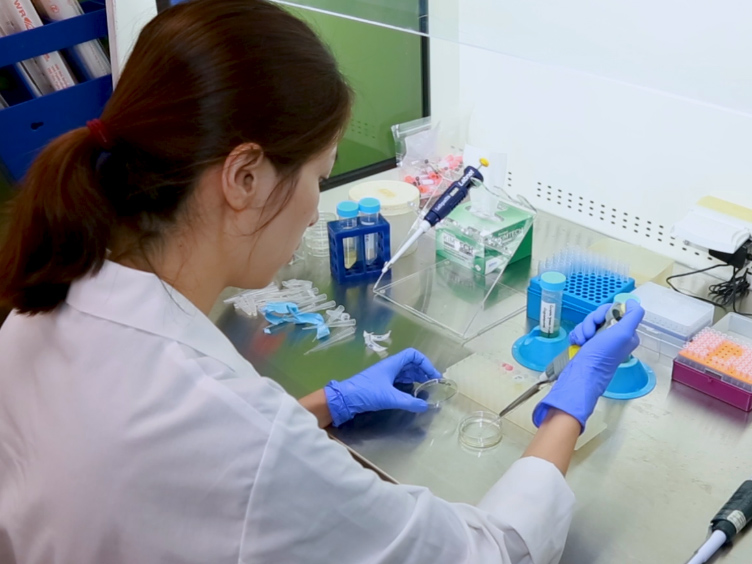